Weekly Indicators for October 2 - 6 at XE.com.

The slew of positive trends continues.
Posted by New Deal democrat at 9:02:00 AM

The more leading numbers in the report tell us about where the economy is likely to be a few months from now. These were mainly flat.

This report was certainly affected by Hurricanes Harvey and Irma, but what is surprising is all of the areas of strength, especially in the household report.

Both the U3 and U6 unemployment and underemployment rates fell to new lows for this expansion. Involuntary part-time employment also fell to a new low. Prime age labor force participation rose to a new high.

Even in the establishment survey, but for the huge decline in  leisure and hospitalityworkers, the headline number would have been +78,000. And the l eading category of temporary jobs increased.

The only cautions to my surprisingly upbeat take on this report are that net revisions to July and August were lower, which has become increasingly common this year; and the household survey, which included a gain of over 900,000 jobs ( ! ) was likely something of an outlier.

But despite the negative headline number of jobs, the totality of the two reports show an underlying strong labor market -- with of course the dismal and chronic exception of lackluster wage growth.

Hurricane adjusted initial jobless claims for the week of September 23: 246,000

This tells us whether or not the hurricane disruptions are masking any underlying weakness in the economy.

This year I backed out Texas starting 3 weeks ago, and added Florida two weeks ago.  This week I have added Puerto Rico.

The state by state data is released with a one week delay.  So what follows is the analysis for the week of September 23, the number for which was reported at 272,000.

*The Department of Labor estimated the number of claims for Puerto Rico last week.

Thus the hurricane-adjusted initial jobless claims number for the week of September 23, 2017 is 246,000.

Just a quick note about two data releases this week, one of which was (apparently) whipsawed by the hurricanes, and the other (surprisingly) was not.

Motor vehicle sales appears to have been whipsawed by Hurricane Harvey, showing a very strong 18.4 million units annualized after a very weak 16.0 units in August:

(Note the FRED data, by contract, is delayed one month so does not yet show September). It's pretty clear these two months should be averaged to get a better idea of the trend, which is a little over 17 million units.  Even so, that is an improvement from earlier this year. More importantly, it takes the notion of an immediate recession signal off the table.

ISM manufacturing came it at a very strong 60.8, which is not just the highest reading of this entire expansion, it is the highest since 2004. Meanwhile the new upstart Markit PMI posted at 53.1, a moderately positive number (h/t Doug Short): 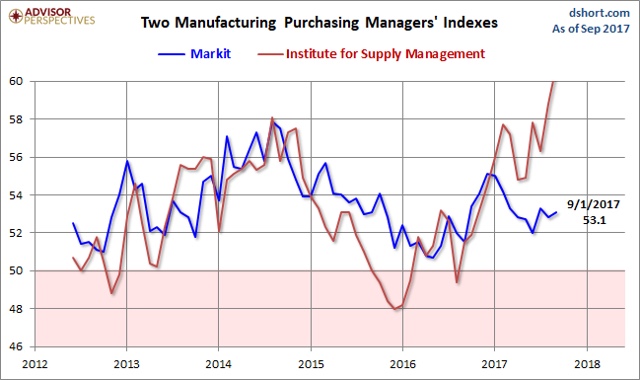 The ISM figure once again confirmed the strength shown in the regional Fed indexes, which surprisingly even included Texas. Even PMI's more tepid reading did not appear to be affected by the Texas and Florida hurricanes.

While the regional Fed indexes and ISM manufacturing have been running a little "hot" this year, they do generally correlate well with the manufacturing component of industrial production.

The bottom line is that these are two short leading signals that the economy is doing very well.
Posted by New Deal democrat at 8:48:00 AM

Construction spending and the housing slowdown

A thought for Sunday: of basic decency and humanity, and how the economy is shoring up the GOP


A few threads of the Trump malAdministration came rogether this past week.

The latest attempt to overturn Obamacare confronted Trump with a choice between his two main goals: basking in a Trump triumph vs. erasing all of Obama's programs from the history books (in retaliation for Obama humiliating him at the White House correspondents' dinner in 2011).

At the beginning of his presidency, Trump opposed the "repeal and run away" Congressional GOP objectives for Obamacare, telling them he wanted a "replacement" plan with more coverage and lower premiums. He wanted, in short, a Trump triumph.

After 3 failures, however, Congress's 4th try at dismantling Obamacare has no replacement features. Things like guaranteed coverage of pre-existing conditions were stripped away. The bill in essence simply repealed Obamacare, punted the issue to the States with instructions to not even think about enacting something like universal coverage, and gutted Medicaid to boot. In short, it was very much "repeal and run away" (with a fig leaf).

Trump's support for the bill showed that he will even eschew a Trump triumph if the alternative obliterates an Obama accomplishment.

Another thread of the Trump  presidency is its nearly constant failure on the test of basic decency and humanity.

One of the places where it had been safe to avoid the rancid circus of Washington was The Weather Channel.  Not this past week, where it more than any other media outlet highlighted the humanitarian crisis in Puerto Rico, which appears to be approaching Katrina x 10. When an outlet as innocuous as The Weather Channel feels compelled to implore Washington to DO SOMETHING! you know that those in power  have plumbed a new low in the banality of evil.

I have a feeling, however, that conditions in Puerto Rico are going to get much worse -- and maybe finally noticed by the actual news media -- before they get better.

Which brings me to the final thread. Polling for Trump has been waxing and waning within a limited range for half a year now. It waxes when there he rails against foreign or domestic enemies, like North Korea or uppity nonwhite malcontents, and wanes when his basic lack of decency and humanity is in the forefront.  To wit, here is the latest update from Gallup:

Why hasn't it sunk any lower?

Paradoxically, Trump and the GOP are benefitting from the pretty decent Obama economy -- which is still in place, on autopilot, because the GOP has accomplished exactly zero legislatively on economic matters.

And the ongoing Obama economy at the moment has a 4.4% unemployment rate, is still adding about 150,000 new jobs a month, has real median household income at its highest in a decade, if not forever, and real hourly wages for nonsupervisory workers at their highest in 4 decades. In short, civil society may be going to hell, but the economy?  Not too shabby.
Historically, in the absence of either war or civil unrest generating a real death toll that dominates the headlines  (like Korea, Vietnam, or the race riots of the late 1960s), an economy with these numbers generates reasonably good numbers for the incumbent political party. The benefit of that -- of Obama's economy -- is currently going to the GOP!
But if Trump's approval is in the 35%-40% range with a decent economy -- and the Congressional GOP polling at the worst ever -- just imagine what the polling is going to be like when the economy as it must ieventually turns down.
Posted by New Deal democrat at 8:00:00 AM