Weekly Indicators for April 7 - 11 at XE.com

My Weekly Indicators post is up at XE.com. The run of springtime positive data continues.
Posted by New Deal democrat at 8:33:00 AM

I have a new post up at XE.com discussing the issue of record margin debt in stocks.  The CHARTS OF DOOM that you've probably seen only go back to about 1990.  What happens when we go back to the 1960s and 1970s, or even the 1920s and compare?

--------
For those of you who are long-term readers and remember us from our Daily Kos days, I wanted to add a note. One thing that makes my blood boil is when a person of modest means and very limited financial knowledge is panicked by a Doomer post, and asks them questions like, "I'm so scared.  What should I do with my 401k?  Should I cash it out?"

Literally I have messages bookmarked where the Doomers were bearish on stock in June 2009.  That's how bad the level of analysis has been.  I recall a top ranked diary from someone called "Stranded Wind" who argued that the FDIC was about to go bankrupt in July 2008 and actually wrote


Run, don’t walk, to your bank and get the funds you have clear of this mess before it gets any worse.

That diary got 610 comments and 345 recommends.  People actually followed his advice.  A full three years later he got banned after it was discovered that he apparently had a much darker side.

Well, the diaries in the last couple of weeks have given rise to some similarly panicked comments.  Anything is possible, but the panic these people spread has some real world consequences among their less informed readers. 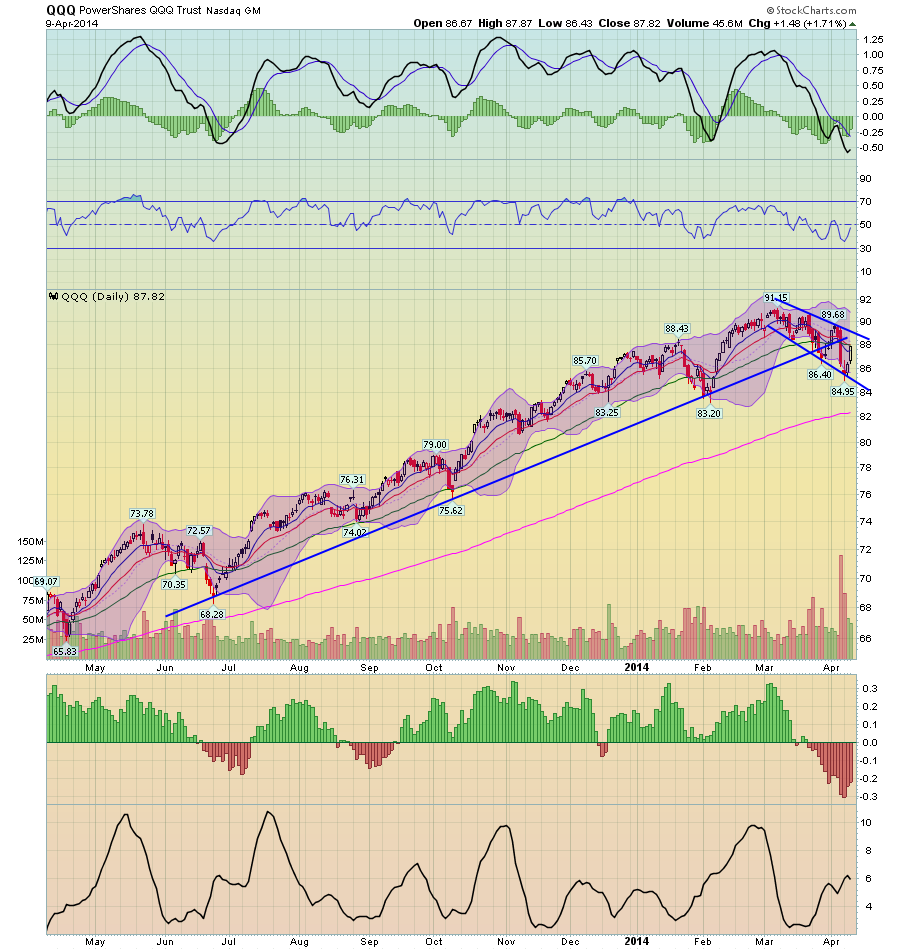 The QQQs have broken their nearly year-long uptrend and are currently trading in a downward sloping channel.
Posted by Unknown at 6:00:00 AM

Why isn't growth in the EU's LEIs leading to meaningful economic growth?

http://community.xe.com/forum/xe-market-analysis/why-isnt-growth-eus-leading-index-translating-meaningful-economic-growth
Posted by Unknown at 6:00:00 AM

"Prices will fluctuate:" why progressives (and everybody else) should care about corporate profits and stock prices

I was minding my own business yesterday when my attention was called to a diary on the Rec list at Daily Kos.  Didn't I disagree?

Which is in stark contrast to the "stocks don't matter" (but only if they are going up) mantra of the Pied Piper of Doom.

Although the data goes back many decades, here is a close up of the last 10 years of corporate profits (red, right index) and jobs (blue, left index):

And here is a close up of the last 10 years of stock prices (red, right index) and jobs (blue, left index):

The problem progressives (and many others too) have with the economy is that almost all of the gains have gone to producers, and almost none to labor.  We could have profits and stock prices going up at a slower rate, and still have increasing jobs as well as increased middle and working class incomes - not to mention spending on improving our infrastructure.

At the moment there is some concern among the financial press that corporate profits in the 1st quarter actually declined.  And because I care a lot about jobs, that means I am concerned too.

Before I conclude, a few comments about that diary yesterday.  Here's the conclusions the diarist actually made:

[E}very time the overall price of stocks have gotten this expensive in the past there has been a crash.

So is it really a radical suggestion to say that we are overdue for a severe stock market correction/crash?

Like stocks, when [houses] get expensive the risks switch to the downside.

Does this mean that the economy is about to collapse? That there is nothing ahead but doom-and-gloom?  No. But it does mean that there is almost no chance that we will avoid a serious stock market correction before the 2016 election. What's more, housing will soon be topping, if it hasn't topped already. Both of these things will be putting pressure on the banks and the economy in general.

Except for the breathless invocation of a "crash," I don't really disagree with this person.  Later on he defined "crash" to mean a 20% correction in stock prices at some point in the next 2 1/2 years.  Since stocks have corrected by at least 19% in more than half of the last years where there has been a midterm election alone, as shown by this graph:

And since stocks have declined by 20%+ on average about once every 4 years going back to 1900, a prediction of a 20% correction at some time before the end of 2016 is really just saying "stock prices will fluctuate normally."  Indeed, I've described in several posts how corporate profits tend to lead stock prices, and prices have increased about 20% more than corporate profits in the last 18 months.  Unless there is a real surge in corporate profits this year, a 20% correction in stock prices would hardly be unusual.  As to the increase in margin debt, that tells us nothing about timing.   All it does show - and it is significant - is that the more the leverage, the faster the decline might occur, when it does (because leveraged players in trouble have to unwind positions quickly, and can't hold them).

As to housing, for almost 6 months already, I've been forecasting an outright decline at some point this year, to the tune of -100,000 in permits or starts.  Last month starts were -62,000 YoY, and on a seasonally adjusted basis, all housing series have declined from their recent peaks.  As this graph of housing permits vs. the Case Shiller house price index shows:

sales peak and trough before prices.  If prices overshoot (and in at least some metro areas they almost certainly have), they will correct once sales start to dry up and inventory accumulates, as may already be happening in, e.g., Phoenix (h/t Calculated Risk:

So yes, there is reason to be concerned about housing, and reason to be concerned that stock prices will fall.  At some point housing, stock prices, and corporate profits are all going to have peaked, and then layoffs will cause an actual loss of jobs in the economy.  But the odds of an actual downturn in the economy with actual sustained job losses this year are virtually nil. 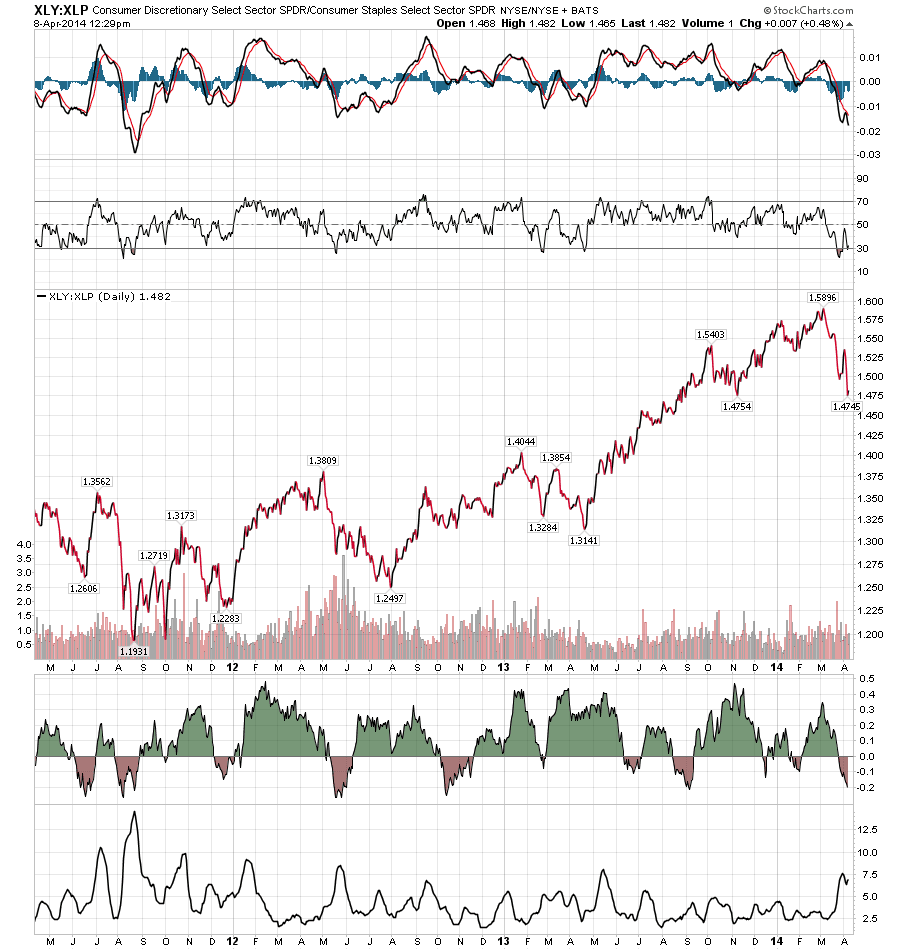 Above is a chart showing the ratio of consumer discretionary stocks to consumer staples stocks.  Discretionary stocks were outperforming from 04/13 until recently when the relationship broke down.  This indicates a change in the risk appetite among traders, at least in the short term.
Posted by Unknown at 11:31:00 AM

More Signs Of A Short-Term US Market Top

On the weekly charts below, notice that all the MACDs have given a sell signal and "rolled over," meaning they are moving lower. 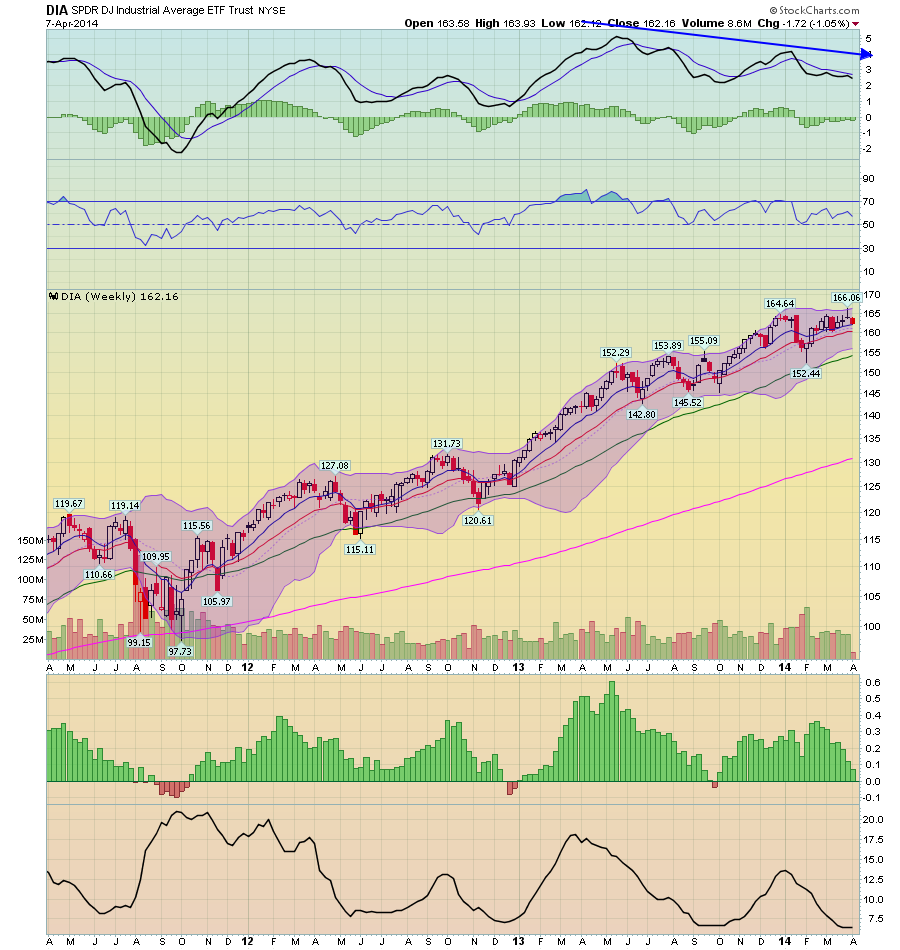 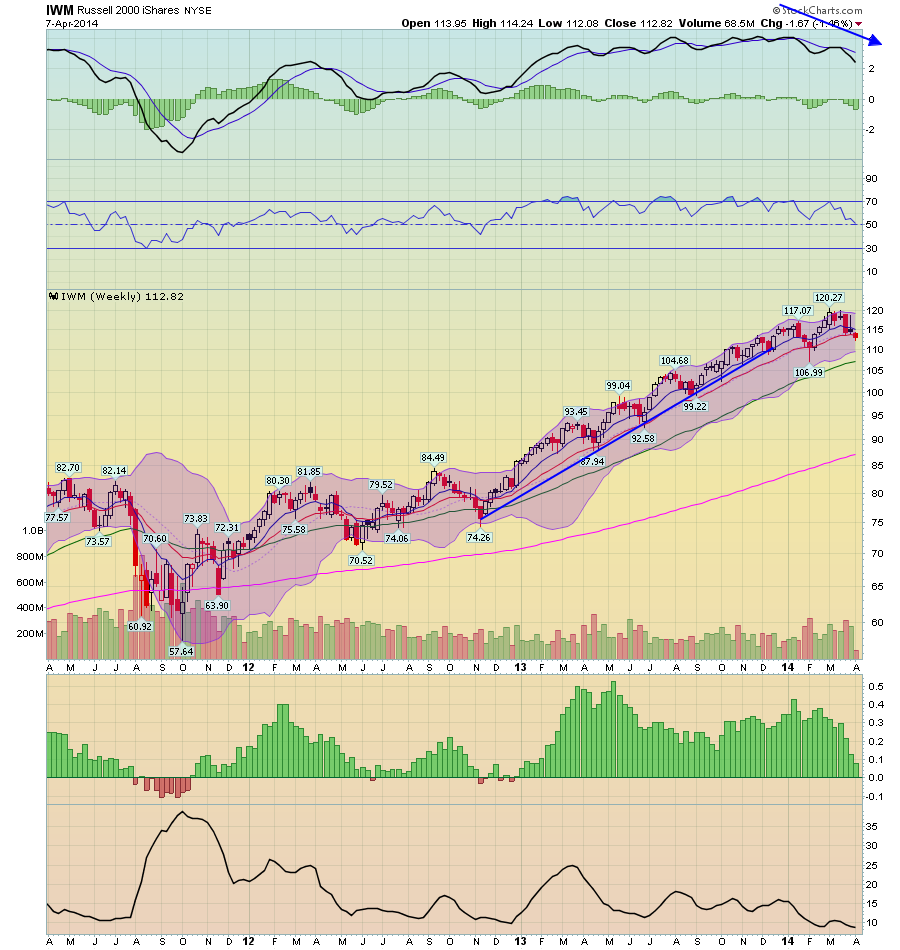 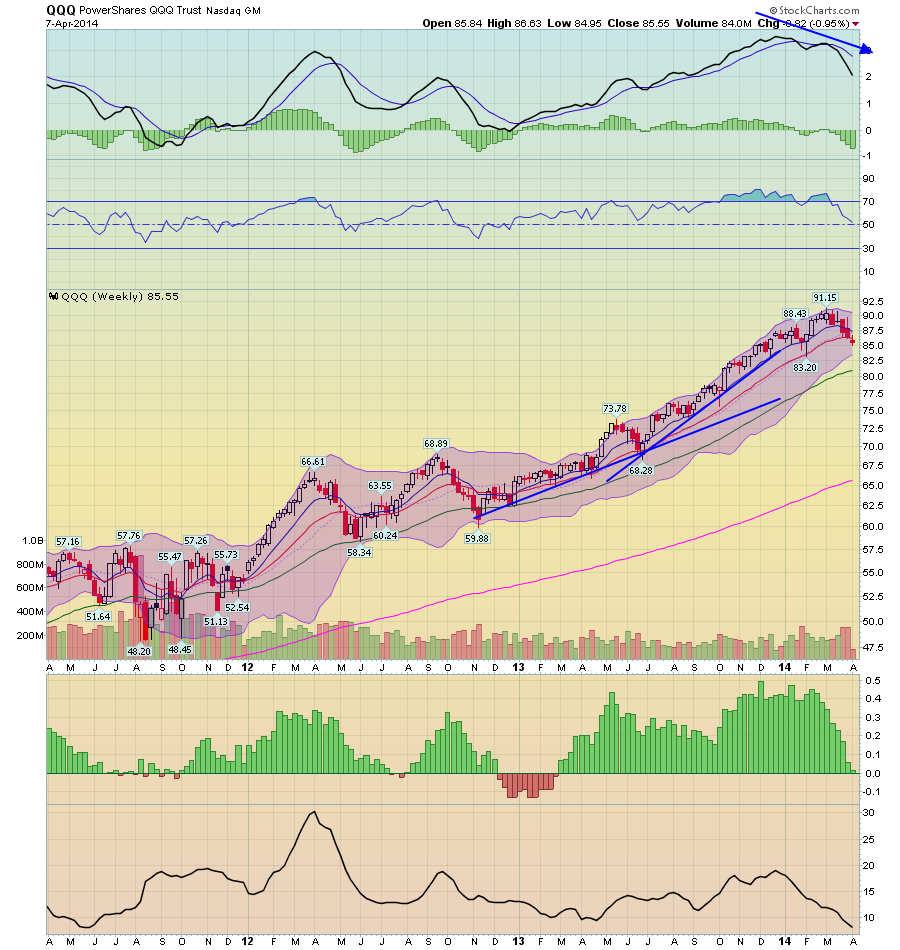 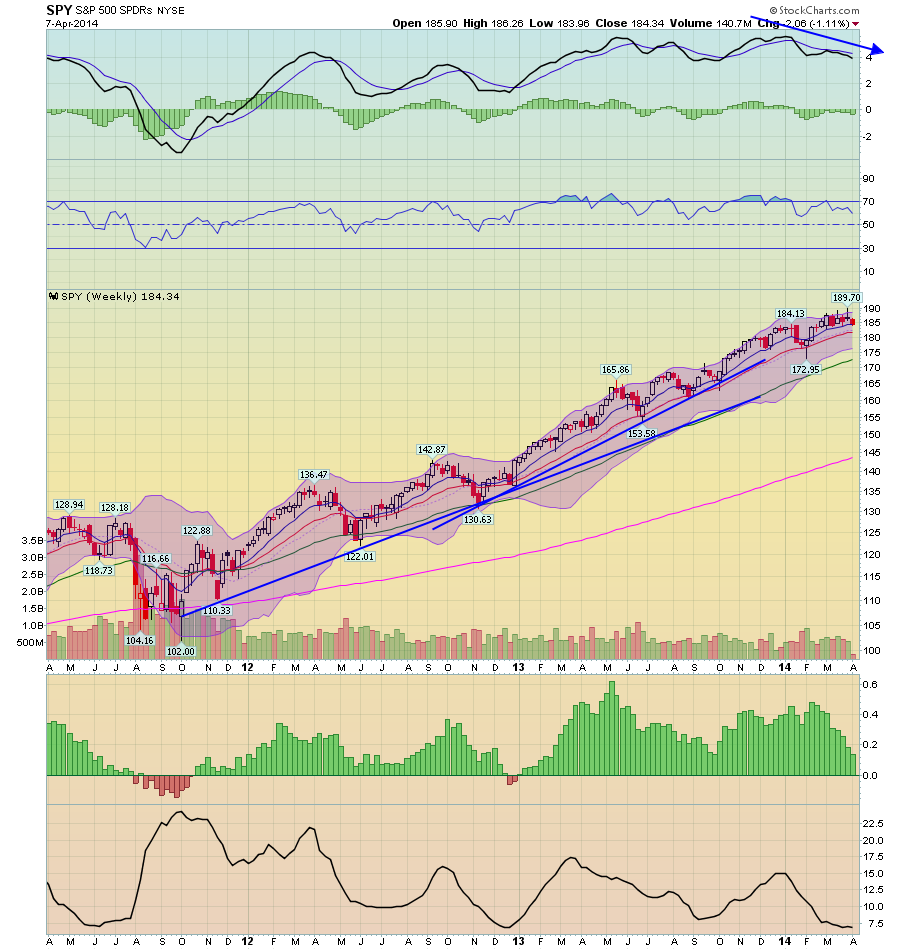