International Week in Review: Hope for the EU and Concern About Australia Edition

Weekly Indicators for February 9 - 13 at XE.com

While the overall tone is positive, negatives in the coincident indicators increased considerably this week.  With inventories high, we may be starting a correction.
Posted by New Deal democrat at 8:55:00 AM

"It's just a recovery in low wage jobs." Not anymore

Here is something I've been meaning to post for the last 6 months!  Over the last 5 years, from time to time the National Employment Law Project has posted periodic updates on the types of jobs created since the bottom for jobs in the beginning of 2010.  Each graph is cumulative, i.e., each graph includes the time frame included in the previous graph.  Note what happens over time, in particular with higher paying jobs.

The first update covered the period only through July 2010: 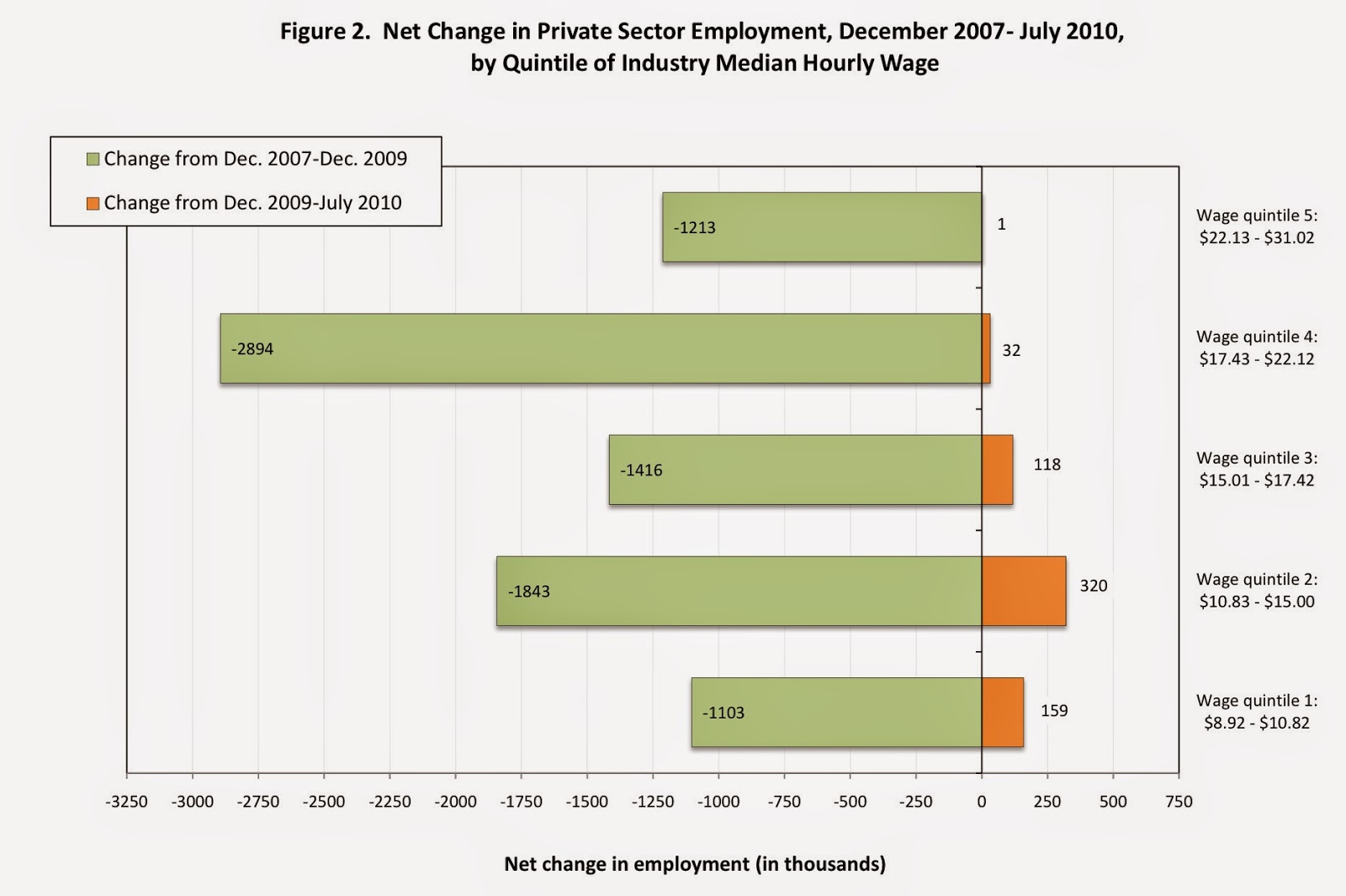 Note that only about 5% of all jobs created in the first few months after the bottom were in the top 2 quintiles.

The next update extended the period through January 2011, and divides into 3 rather than 5 wage brackets: 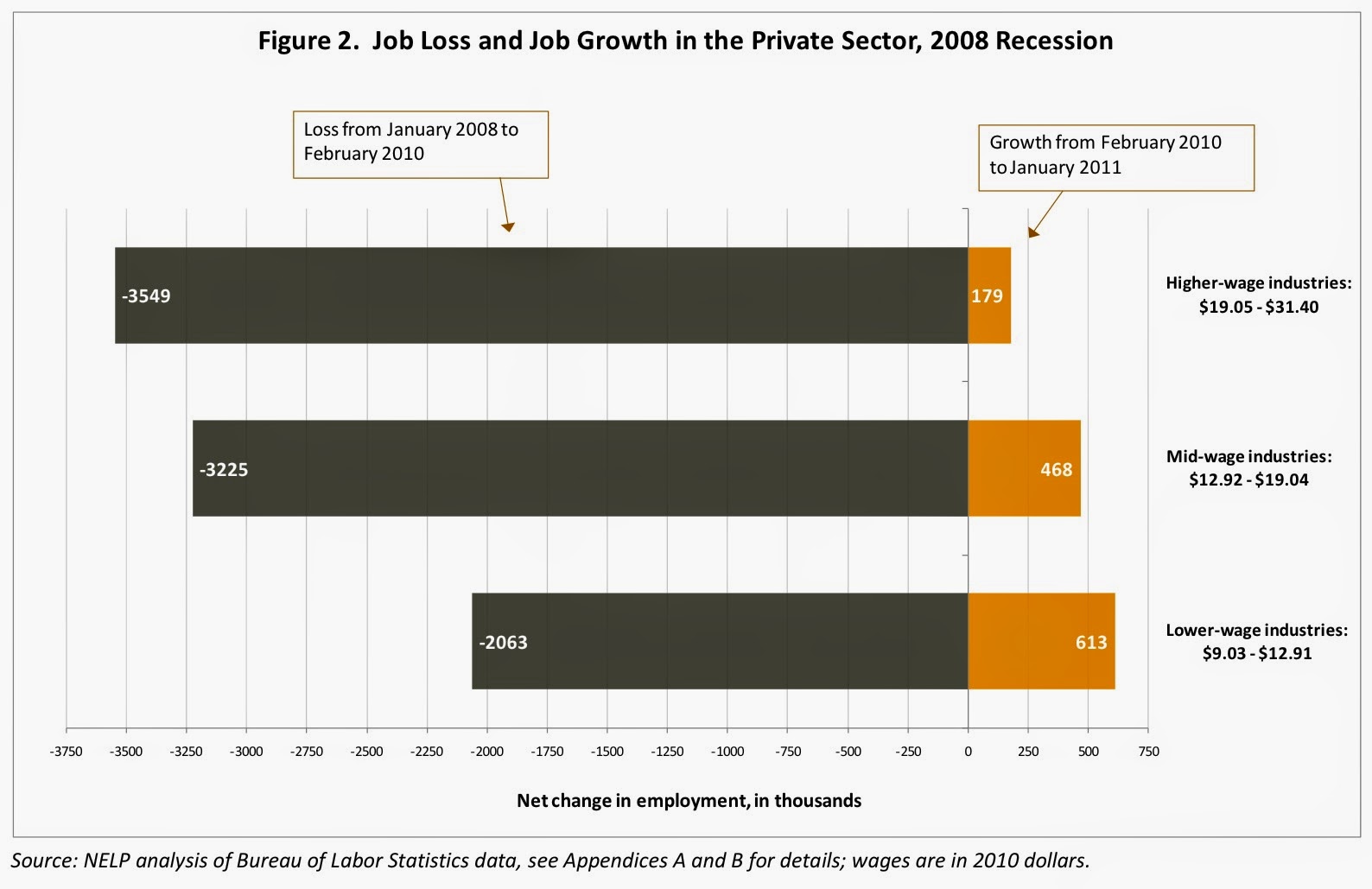 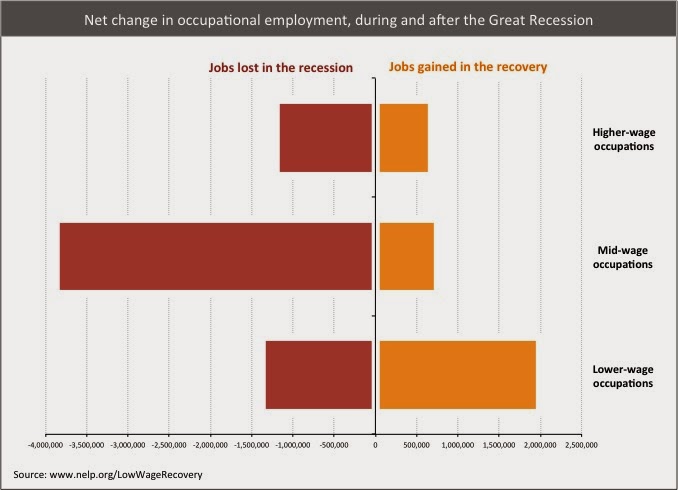 The next update was February 2014: 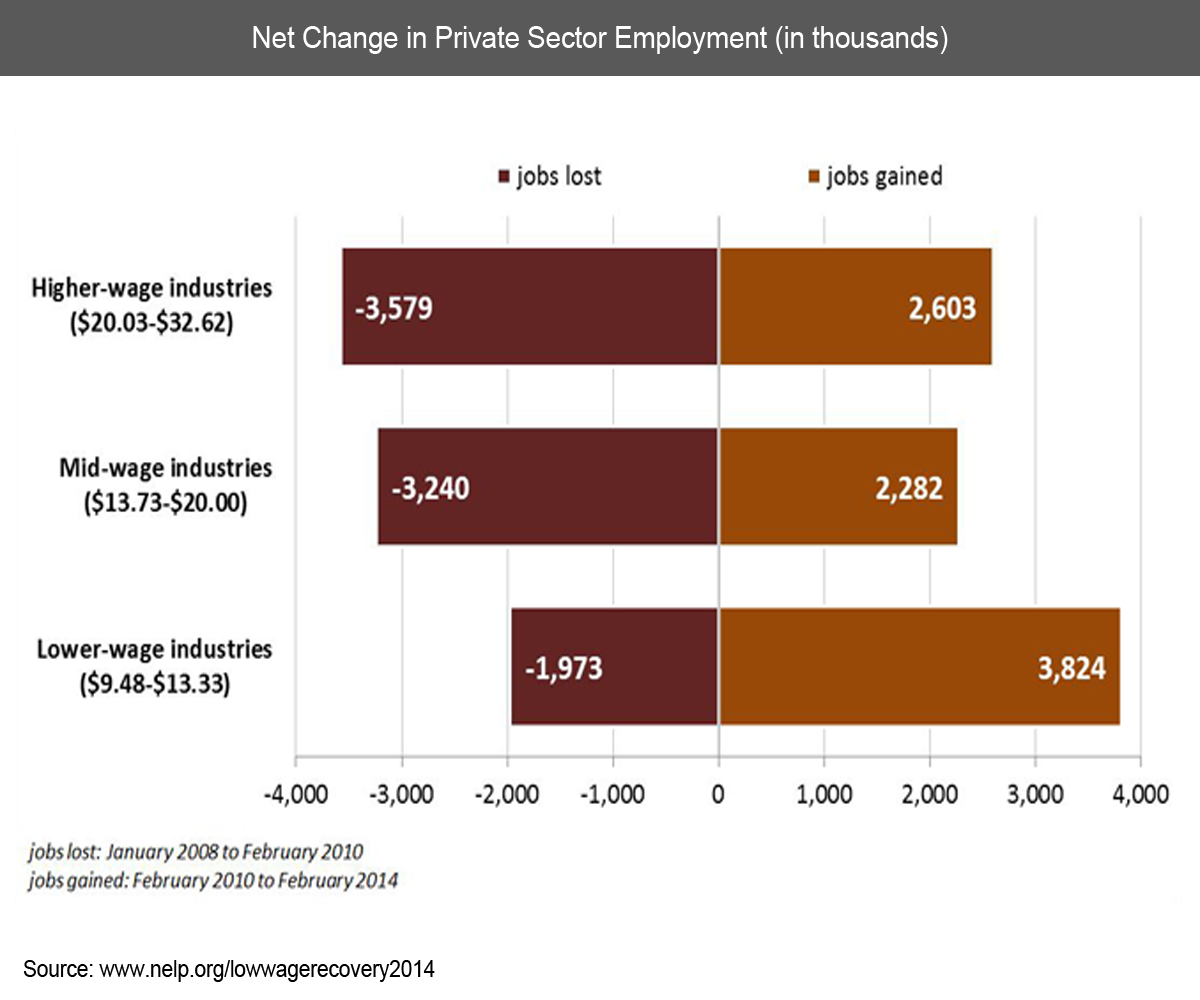 Finally, in August 2014, the NELP published the following graph which covered only the period from July 2013 through July 2014: 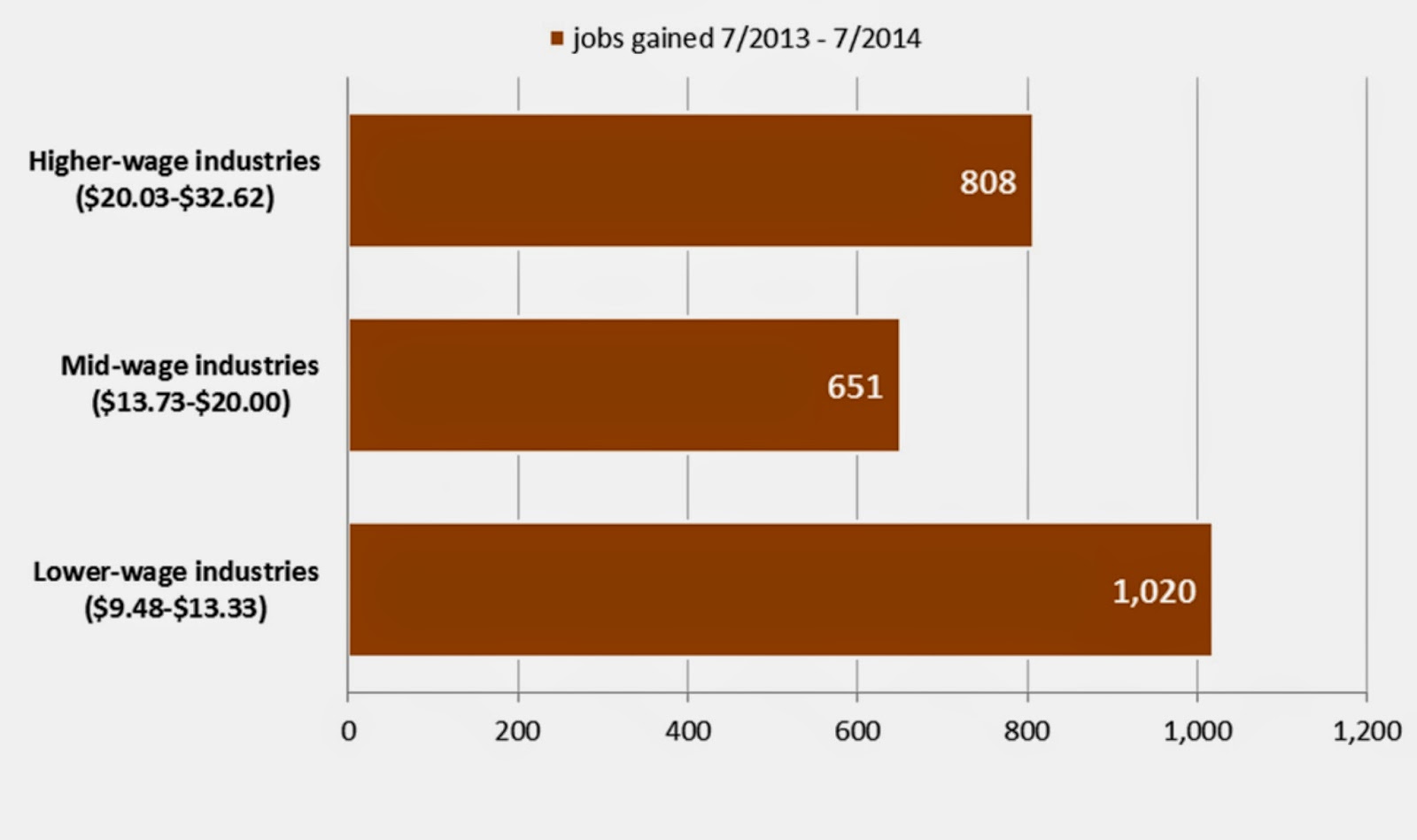 In case it isn't already clear, here is the percentage of high wage jobs created over each time frame:

Since all but the last two measures are cumulative, that means that the most recent job growth in each was even better than reported.  For example, the figures from February 2010 through January 2011 and through February 2014 make it easy to calculate the period from January 2011 to February 2014, which I've calculated for the list below:

While low wage jobs in this period predominated over mid-wage jobs, high wage jobs were created at a normal rate.

On the other hand, it is fair to say that since the NELP calculated that higher paying  jobs were disproportionately lost during the Great Recession - chiefly in manufacturing and government - the net change including both the recession and the recovery has still been from high paying towards low paying jobs.

On a similar note, here is Prof. Menzie Chinn at Econbrowser posting a graph from Torsten Slok of Deutsche Bank questioning whether it has been a low wage recovery at all: 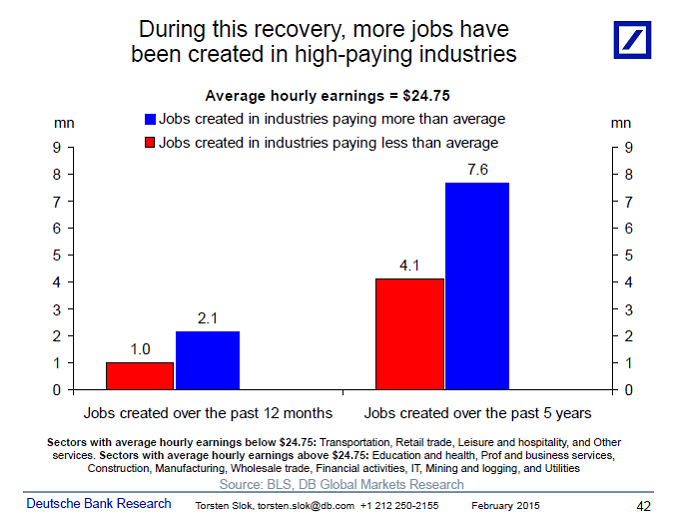 What's the difference here? It's all in the methods.

In the NELP analysis, the division of low, medium, and high jobs is made by lining up each industry's median wage, then dividing that into three equal groups. . . . .

On the other hand, Slok's buckets aren't equal. He breaks down high, medium, and low wage jobs by occupational groups . . . .

This delineation means that Slok puts far fewer workers in the low wage bucket than the other two, therefore the number of jobs created in that bucket is necessarily going to be smaller. It's not perfect, but breaking it down by occupation, rather than industry, gets a little more granular about how incomes correlate to each bucket.

I mentioned last week that median wage growth in the fourth quarter, as measured by the Employment Cost Index, outpaced average (mean) wage growth as measured in the monthly jobs reports.  That might just be an anomaly, or it might be the relative increase in higher wage jobs showing up in the official data.

Weak retail sales are a gas

I have a new post up at XE.com about this morning's retail sales report.

Strip out gas, and retail sales have basically been flat for 3 months. So far, it looks like consumers are saving the money they have saved at the gas station.
Posted by New Deal democrat at 9:06:00 AM

The Remarkable Depth and Breadth of Deflation

So far, gas prices are behaving as they have in the past coming off bottoms.
Posted by New Deal democrat at 12:16:00 PM

I'm going through a bout of blogger ennui. Not much dramatic is happening, and there's no big, changed insight into the immediate future.

I suspect retail sales will disappoint tomorrow, because the weekly numbers for January weren't very strong - it looks like consumers are saving a lot of their gas money.

The latest Eurocrisis is playing out as anticipated. Germany and the Euro institutions are squeezing Greece like a boa constrictor squeezes prey.  They will succeed unless Greece has the will to actually leave the Euro.  If so, then there will be a collective gasp from the rest of the EU as it sinks in that the Euro might actually fracture. That is the point at which a deal might be made.  From the US viewpoint, the Eurocrisis isn't enough to derail our economic expansion, although it will have an impact. The US interest is that there not be a disorderly dissolution of the Euro. An orderly dissolution might even be preferable to the continuation of an intact Euro in its present form.

The rest of the usual Doomer crew has moved on to other topics. Since jobs aren't cooperating, the best they've been able to come up with to whine about a scarequote "recovery" is the stagnation in wages (except, of course, we made a 35 year high in average real hourly wages in December).

Politically, the Democrats aren't going to bother proposing anything serious. So far, the Republicans have accomplished exactly zero - which is the best we can hope for there. Obama has shown no sign of being willing to lift a finger to sign an order raising the maximum pay subject to overtime rules (entirely within his power). So, unless the Supreme Court decides to hold the 20th century unconstitutional (for which, let's face it, there are at least 4 votes),  the economy will probably follow its course undisturbed by Washington.

Which leaves me with nothing big to report to you. I'm still trying to get a better leading indicator for wage growth - without much success.  Aside from that, I've got a bunch of little things I can update, so I will probably inundate you with them.

Just How Sick Is the EU? 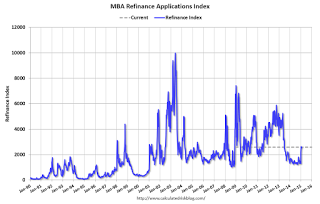 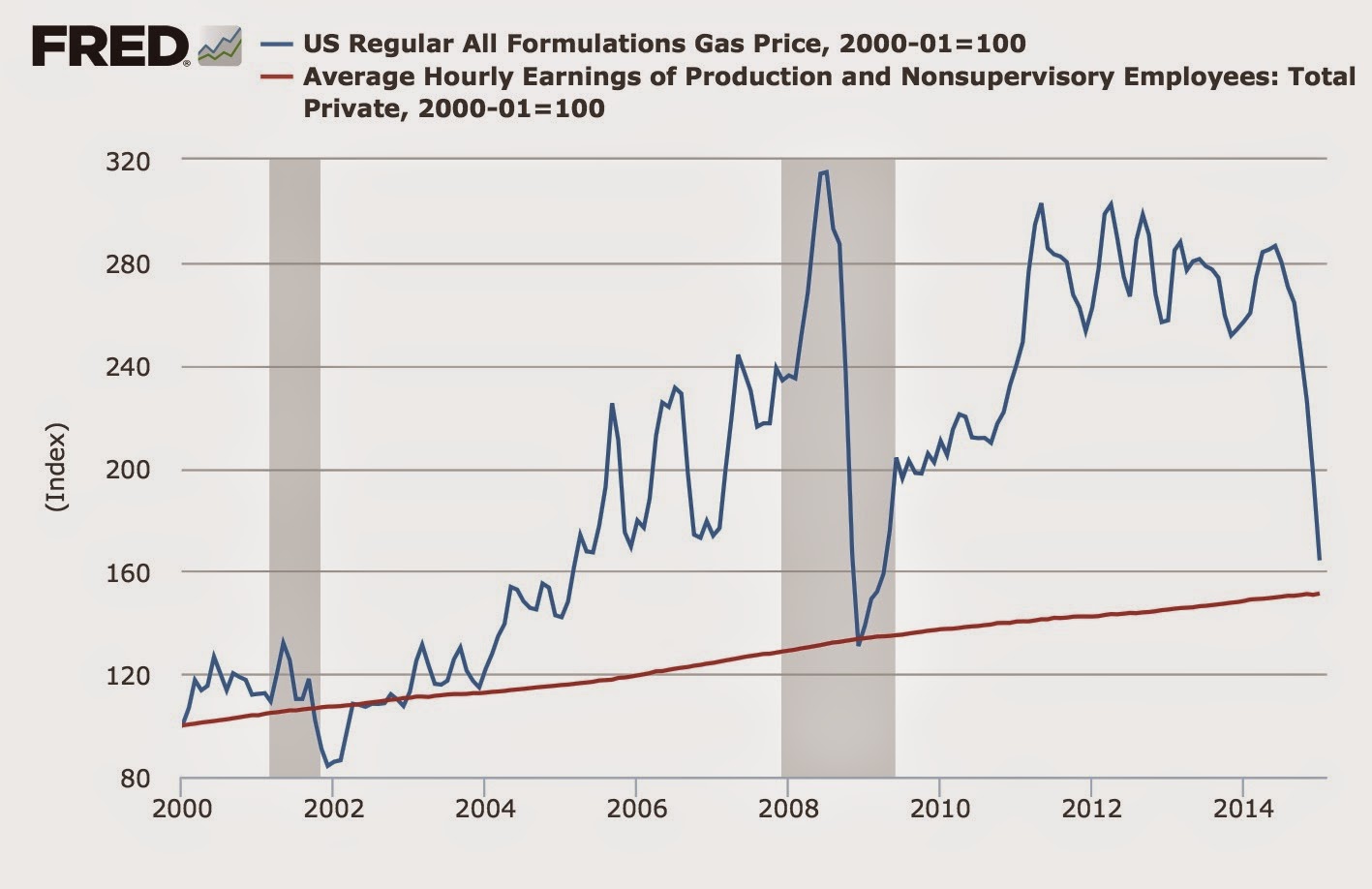 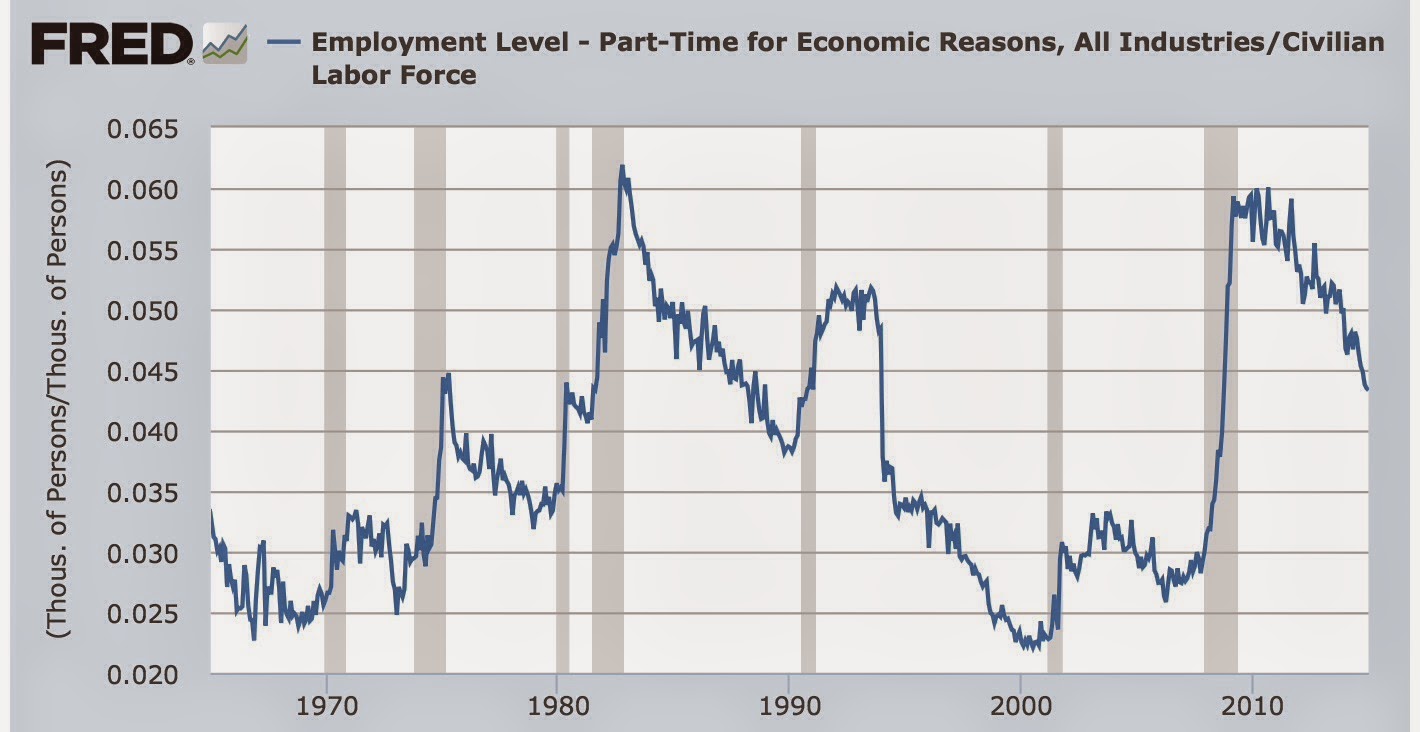 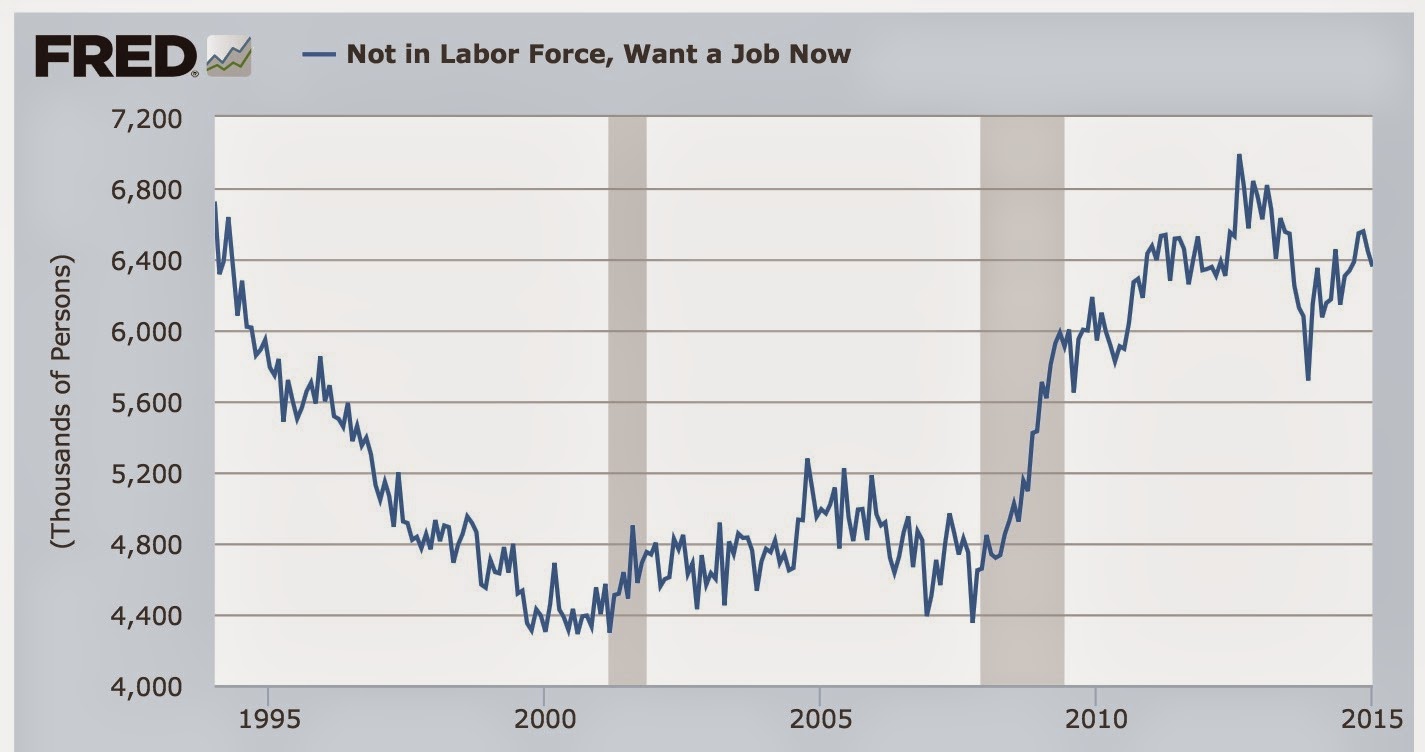 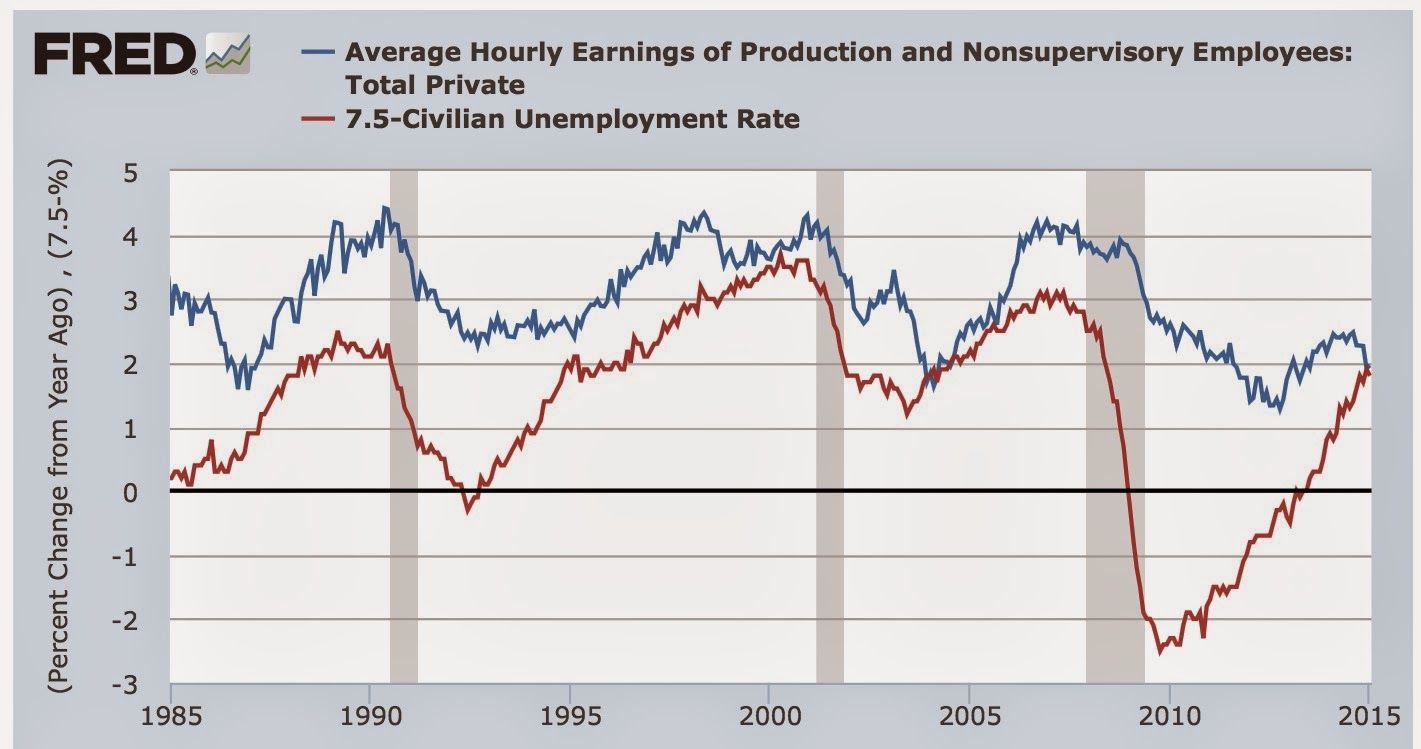 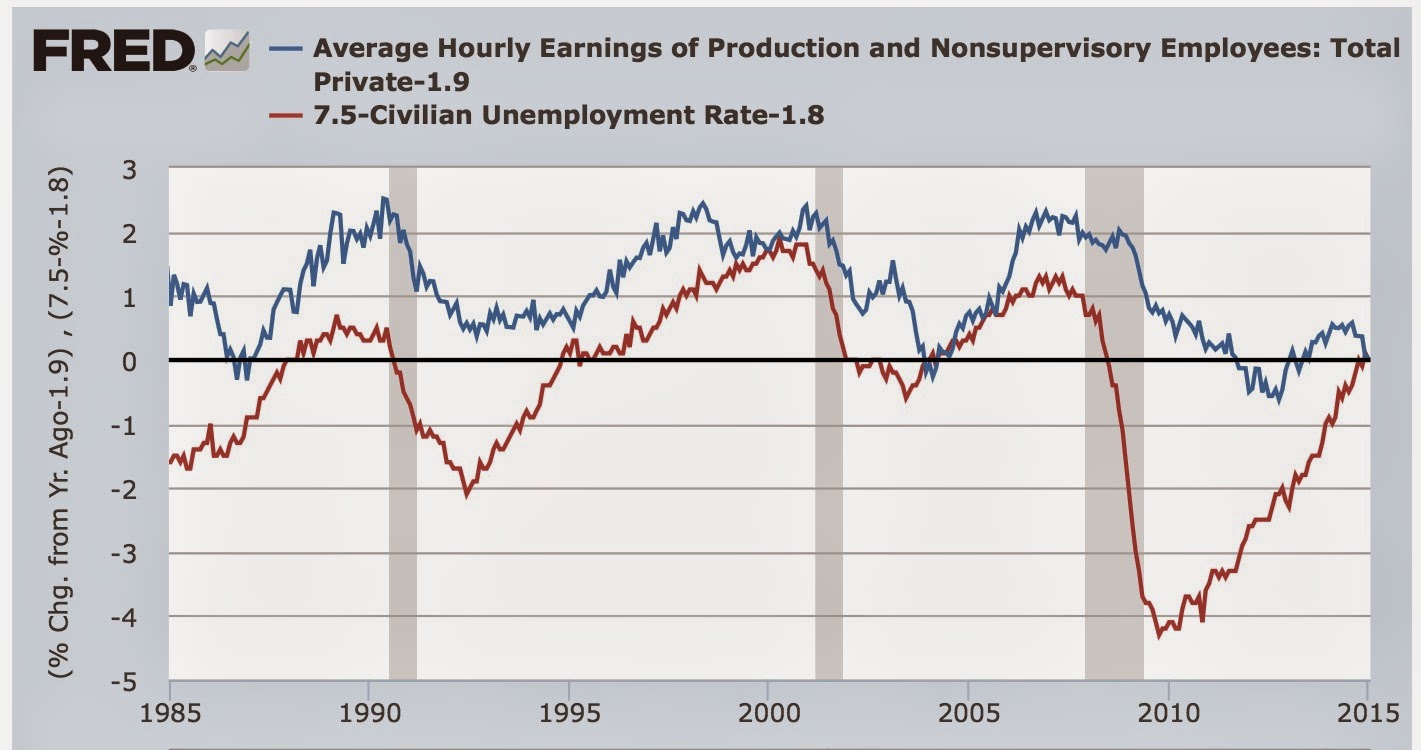 Compare our present expansion with the previous three.  In the 1980s and 1990s, by the time we improved to 5.7% unemployment, nominal wage growth was approaching 3% YoY.  On the other hand, the 2000s expansion had similar numbers to the present - in fact, YoY growth in nominal wages was still declining. Nominal wage growth only approached 3% YoY as the unemployment rate fell to 5%.  If that is the pattern we are following, then even with if the declining trend in the unemployment rate continues, we won't see a marked improvement in wage growth until the second half of this year.
Posted by New Deal democrat at 8:00:00 AM

International Economic Preview For The Week Of February 9-13