Weekly Indicators for May 1 - 5 at XE.com

Despite some flat or faltering monthly data, we are down to only 3 negative high frequency indicators.
Posted by New Deal democrat at 8:34:00 AM 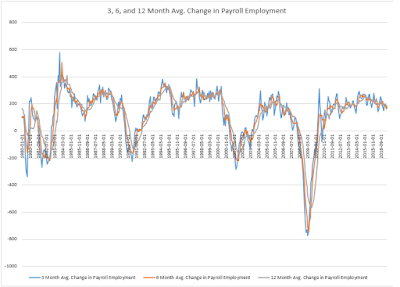 Scenes from the employment report


As I described in my detailed post on the April jobs report, below, almost everything moved in the right direction, and significantly so.  Let me lay out a few graphs to show the longer-term stronger and weaker points.

In the good news department, the U6 underemployment rate has been falling at a good clip in the last few months, and at 8.6%, is about 0.6% from representing a reasonably "full" employment situation:

Part of the U6 calculation is those employed part time for economic reasons.  This isn't down to normal yet, but continues to make good progress:

What is particularly good news is that both the U3 and U6 un- and under-employment rates are falling, even though people in the prime working age demographic are coming off the sidelines in substantial numbers:

The only other times in the last 30 years there has been a 1%+ increase in prime age labor force participation (red line above) were 1988 and 1995.

This *relatively* stout increase in participation is probably an important reason why nominal YoY wage gains for nonsupervisory workers have stalled:

Finally, we still have about 1 million or more people who aren't even bothering to look for work, but would like a job now:

This equates to roughly 0.7% of the prime age population.

In sum, we still need to move this +0.7% off the sidelines and into actual employment, and also add another +0.6% or so from underemployment to complete employment before we can say that the the economy is operating at "full employment." And we are almost 8 years out from the beginning of this expansion, and probably a lot closer to the beginning of the next downturn.  This is simply not an economy that in secular terms is working for the average American.
Posted by New Deal democrat at 9:25:00 AM

April jobs report: a blowout -- except (sigh) for wages

Trump specifically campaigned on bringing back manufacturing and mining jobs.  Is he keeping this promise?

This was an excellent report in almost all respects. Not only were the headlines very positive, but so were most of the internals. Hours rose, aggregate payrolls rose, and the employment to population ratio continue to rise as well. People are coming off the sides maybe not in droves but pretty vigorously -- and they are finding jobs. Involuntary part-time employment is declining sharply.

There were a few pockets of softness, in short-duration employment, which hasn't made a new low in 18 months, and those outside of the labor force but who want a job, which also hasn't made meaningful progress in nearly 4 years (although recently it has declined sharply as well). The labor force participation rate also declined this month.
The other soft spot remains wages, which are only up +2.3% in nominal terms for nonsupervisory workers. This is probably in part due to the YoY increase in prime age participation (up over 1% from ages 25-54 in the last year), which means more competition for available jobs.

So, while this month is very good news, we are still at least 0.5%, and probably more like 1%, from reasonably "full" employment, and wages are still really soft. I will repeat, as I do every month now, that the biggest danger I see in the next downturn, whenever it hits, is that we have the first actual wage deflation since the 1930s.

Postscript: Is this employment report an affirmation of Trump and the GOP? Yes -- if by that you mean that they haven't really done anything to affect the economy as of yet, and so it continues on autopilot.
Posted by New Deal democrat at 8:20:00 AM

Holding Trump to account on manufacturing and mining jobs: setting the benchmarks


Tomorrow is the April employment report, and at this point we can begin to hold Trump and the GOP Congress at least somewhat (but not fully for about 3-6 more months) accountable for the trend. For example, by this point 8 years ago, Obama and the Democratic Congress had passed the stimulus program, and the hemorrhaging of jobs, while continuing, gradually lessened before completely turning around 9 months later.

On the campaign trail last year, Trump made some pretty specific promises to bring back both manufacturing and mining jobs. Those promises were a major part of his economic appeal to the working class. So, beginning tomorrow, it's time to start holding him to account.

Today let's set the benchmarks. As noted above, the economy finally started to add jobs at the beginning of 2010. So let's calculate how many jobs were gained or lost in the Obama recovery, as a monthly average, for those 7 years.

Here is the Obama record on manufacturing jobs annually beginning in 2010:

Now here his the Obama record on coal mining jobs annually beginning in 2010:

For Trump to do better than Obama, he needs to add 11,000 manufacturing jobs a month, and simply not lose any jobs in coal mining.

The accounting starts tomorrow.
Posted by New Deal democrat at 8:00:00 AM

Monthly update on housing and cars

First of all, sorry for the lack of posting this week. Occasionally real life intrudes, and so it did for the last few days, demanding my full-time (and more!) attention. Posting should return to nearly normal.

If the consumer economy were really in trouble, the first two places I would expect to see that manifesting is in housing and cars.  Now that the latest monthly results have been reported, we have an updated look.