Weekly Indicators for September 22 - 26 at XE.com

This week's post is up at XE.com.  A little more deceleration from summer's strongly positive data is evident.
Posted by New Deal democrat at 8:34:00 AM

As you probably already know, 2Q GDP was revised higher again, to 4.6%  This equals the best quarterly reading since the economic recovery began 5 years ago.

Back in June I wrote that the strong rebound in the Weekly Indicators I track were forecasting such a result:


By no means do I claim any expertise in calculating GDP, but if the strong YoY readings I have seen in the last couple of months in my weekly column show up in Q2 GDP, then I wonder if a +4% or even +5% Q2 GDP is in the cards.

So, as I say from time to time, you're reading the right blog.

A couple of closing comments:  on the negative side, even with this revision, the average GDP growth for the first half of the year was only 1.25%.  On the positive side, when we track the YoY%
change in GDP growth, it appears that there has been a slowly rising trend since 2011: 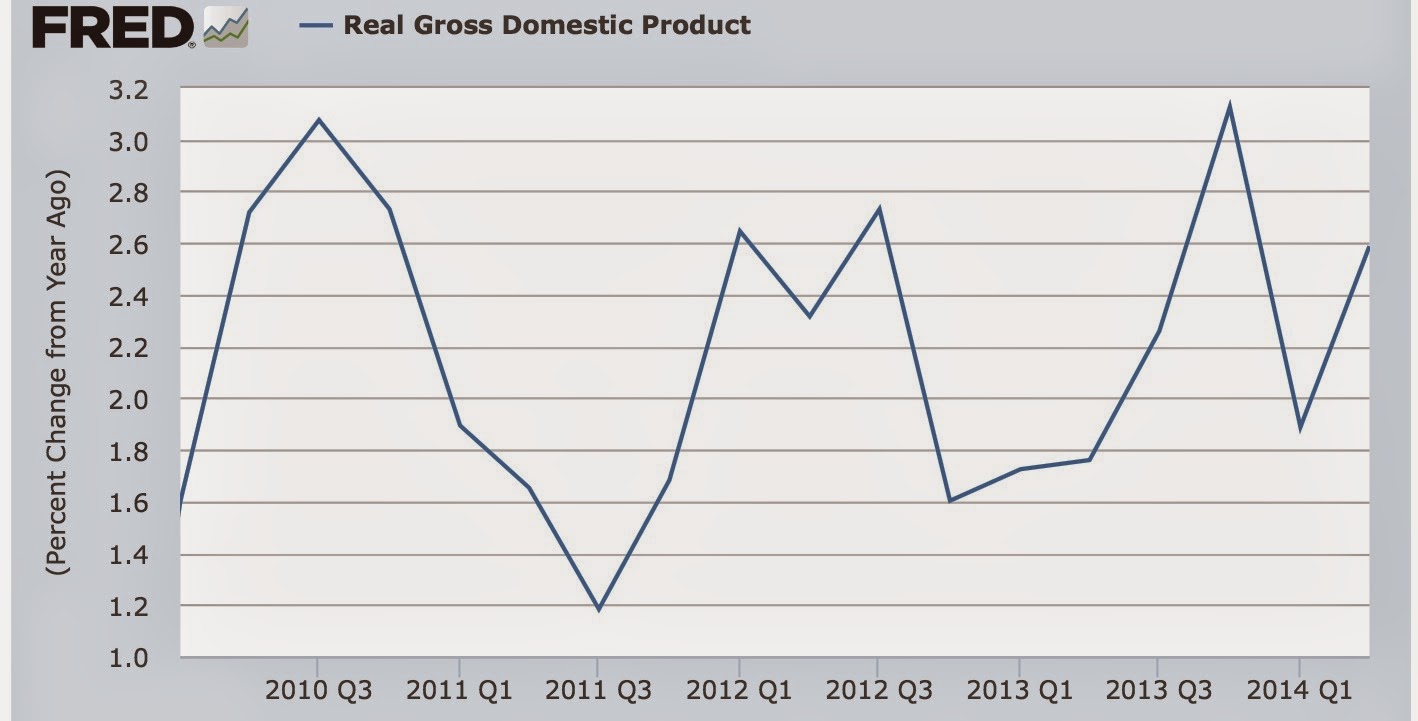 It's still worth noting that before 2000, 3% or higher GDP growth was the norm. 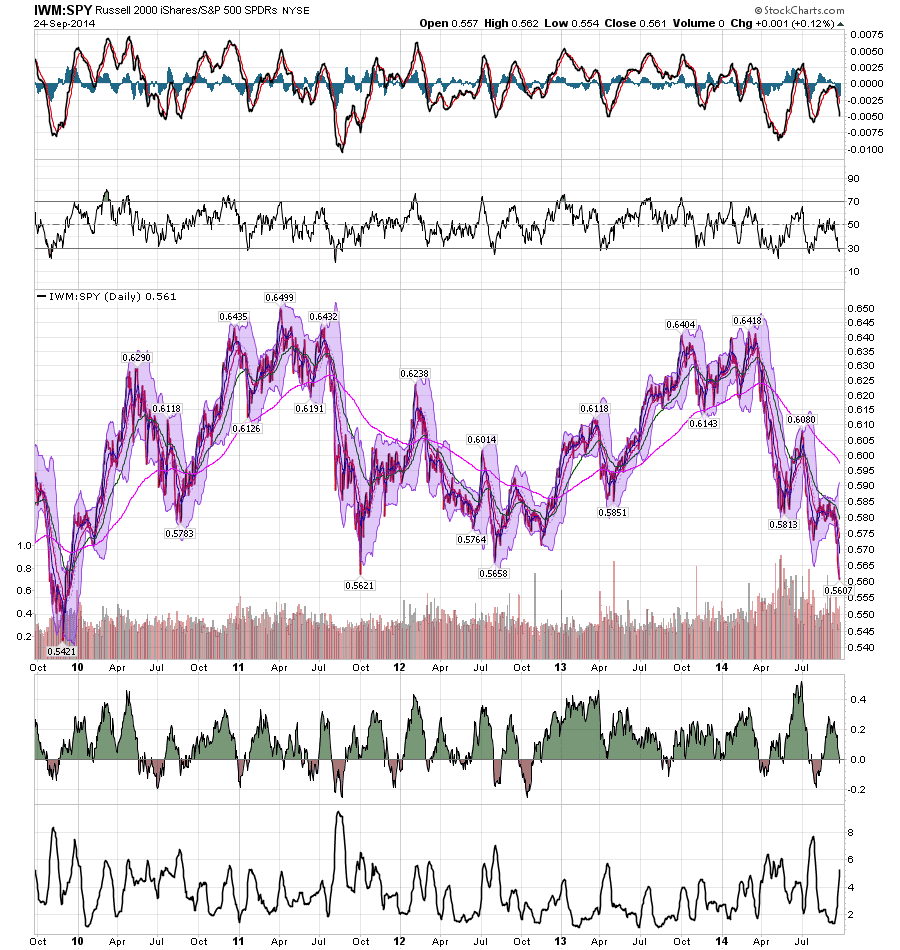 The chart above shows the ratio of the IWMs (Russell 2000) to S&P 500 (SPYs).  Since the beginning of the year, his ratio has been declining, indicating a declining risk tolerance on the part of traders.

New home sales best since 2008 -- until next month's revision

I have a new post up at XE.com, about this morning's blowout new sales report, as of now the best since 2008.

Contain your enthusiasm, and bookmark this post for one month from now when the revisions come out.
Posted by New Deal democrat at 12:56:00 PM 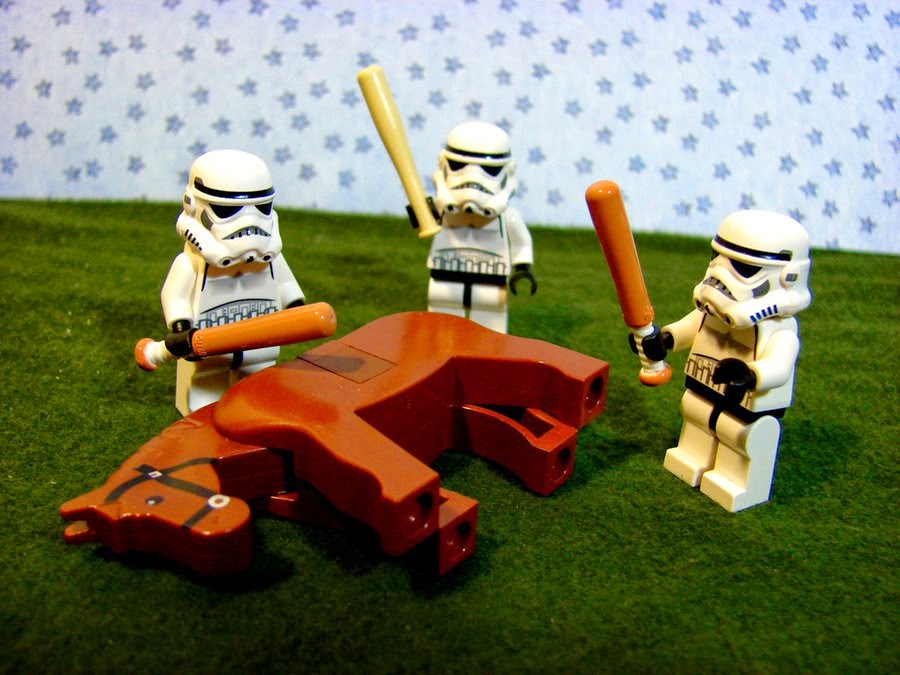 It has now been a full three years since ECRI announced that the US was "slipping into recession" "now" and in fact "it might have [already] started."  The full catalogue of ECRI's pronouncements can be found in my post one year ago on the two year anniversary of their epic faceplant.

Still, the quantitative and sequential long leading/short leading/coincident/lagging indicator approach they inherited from their founder, Prof. Geoffrey Moore is one of obvious merit. In 2011, they made the human error of reading the temporary air-pocket caused by the debt ceiling debacle as something more lasting.

Last year I made a plea that they consider a "recession 2.0" watch. That watch would be premised on the idea that, even if their existing call is wrong, the new data when it occurs will justify a recession call totally independnent of their pre-existing 2011 recession call.

This is the approach ECRI seems to have adopted, no longer focusing on attempting to justify their 2011 call, but simply looking forward from the data now.  I approve.
Posted by New Deal democrat at 8:33:00 AM

Historically, the market is not overbought, but is clearly expensive.  The S&P 500 PE ratio is 19.93 while the dividend yield is 2%.  And the price to book value is 2.81.  The PE ratio is pretty stretched above the median level (14.5 verses 19.4).  All of these numbers tell us what we pretty much already know: we're pretty far into this bull market; we're not going to find any cheap companies.

The IWMs (Russell 2000) continues to be the index to watch for "real" market sentiment. 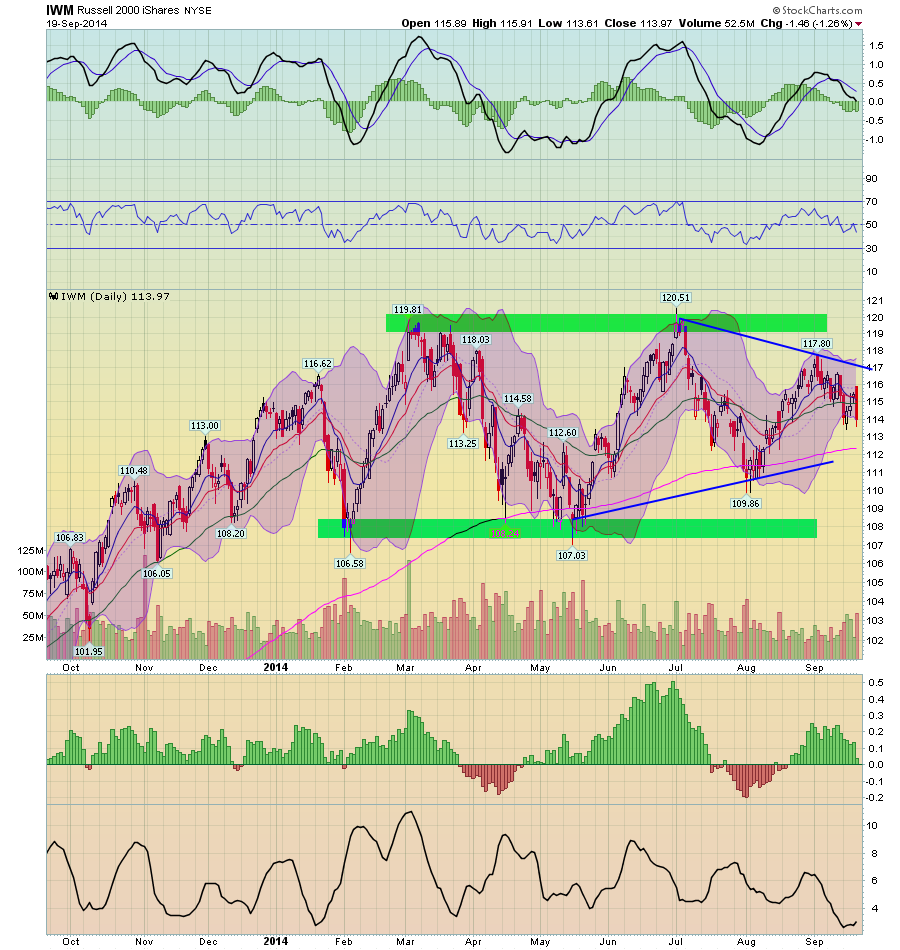 The market has been consolidating since the Spring with a high in the upper 119s/lower 120s and low of 106s/107s.  In addition, a prices are consolidating in a triangle pattern, with trend lines connecting the lows of May and the highs of July.  The MACD his been trending lower since the July highs as well as has the RSI.  We need to see a strong move above the 120 level or below the 106/107 level to get a better read on what this market really wants to do.

And so long as we're on the IWMS, let's take a look at important moves in the 5 minute weekly chart, comparing the SPYs and the IWMs. 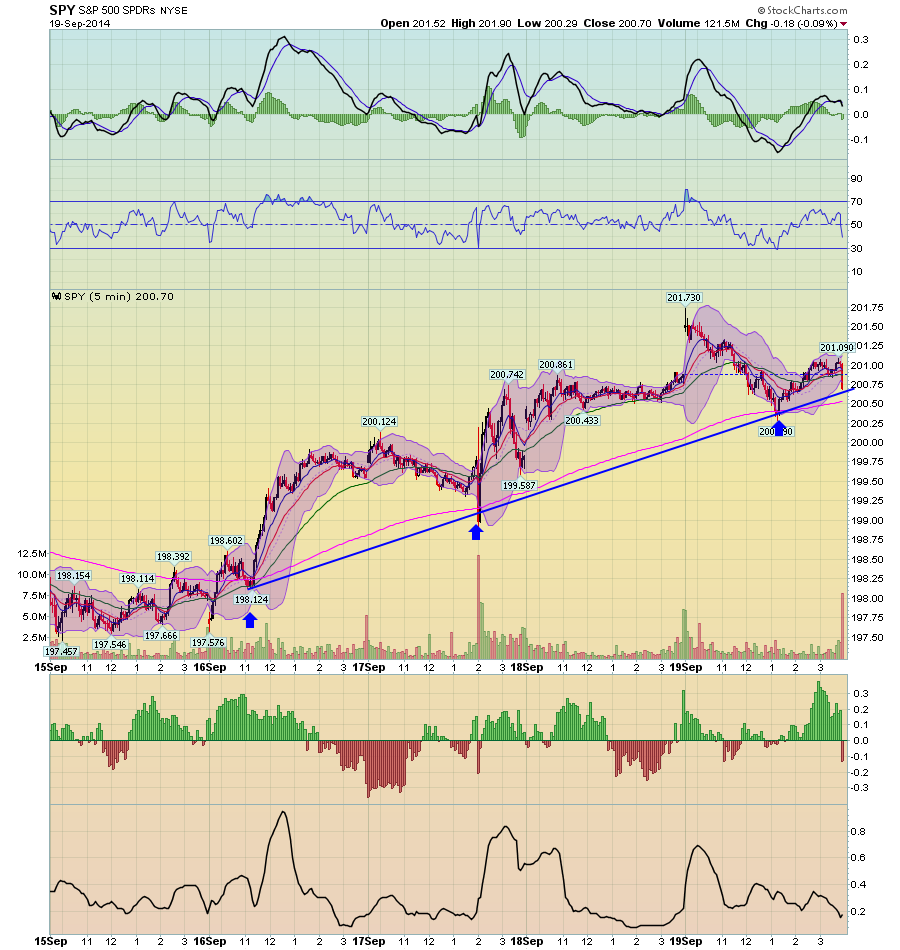 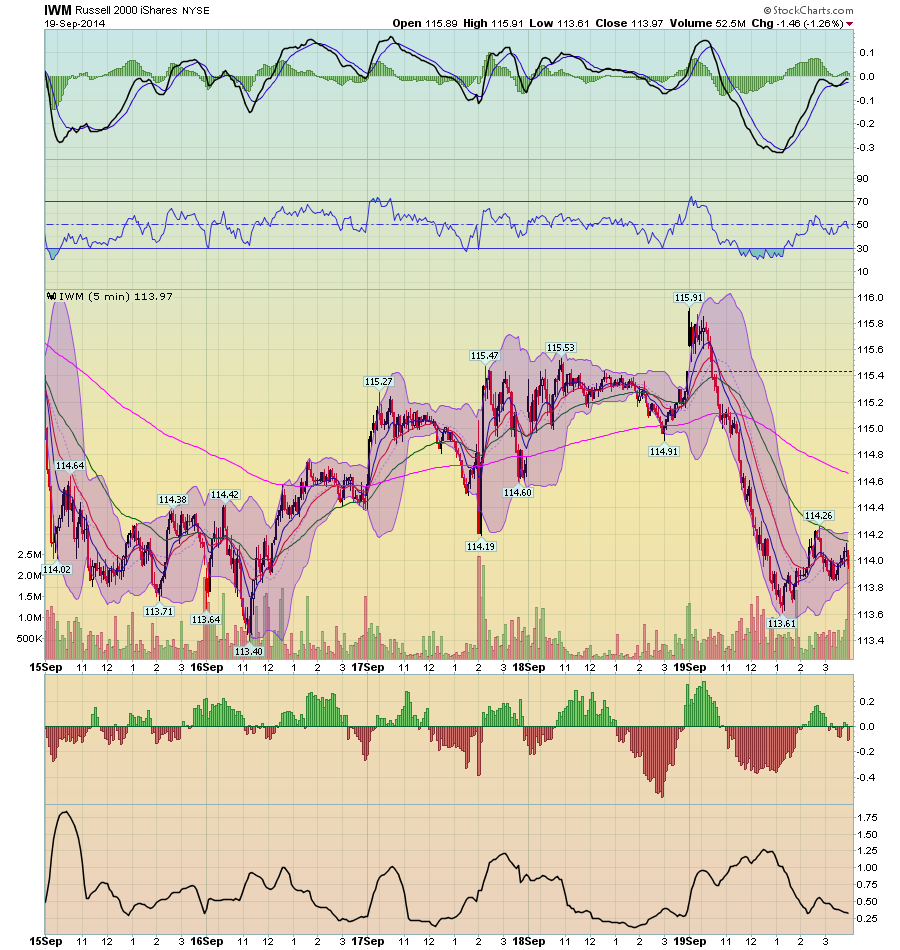 ﻿
In contrast, note the sharp sell-off in the IWMs on Friday, and compare that to the SPYs sell off.  The IWMs moved through the 200 minute EMA and continued lower until they were near the weekly lows.  Only then did they rally.  But the rally was only a bit stronger than a dead cat bounce, hitting resistance at the 50 minute EMA.  And, the 200 minute EMA  moved lower on Friday, in contrast to the SPYs.
Let's continue this comparison/contrast between the SPYs and IWMs by looking at the 30 day charts: 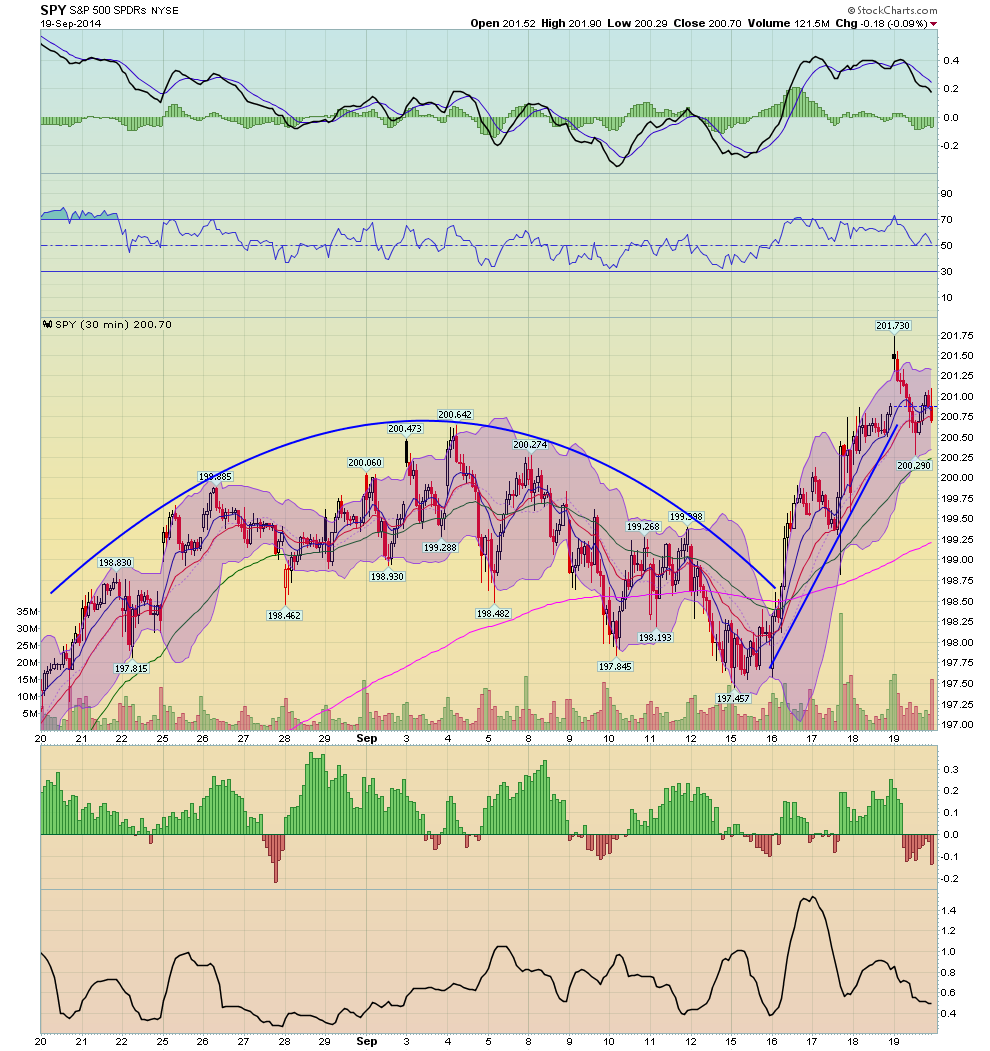 The 30 minute SPY chart can be broken down into two patterns, with the first being a price arc lasting for the first ~2/3 of the chart, as prices rose from the 197.25 level to the 200.6 level and then fell back to the lower 197s.  But last week, in anticipation of the Fed's statement, the market rallied for the better part of the week.  On Friday the market gapped higher, but then traded a bit lower. 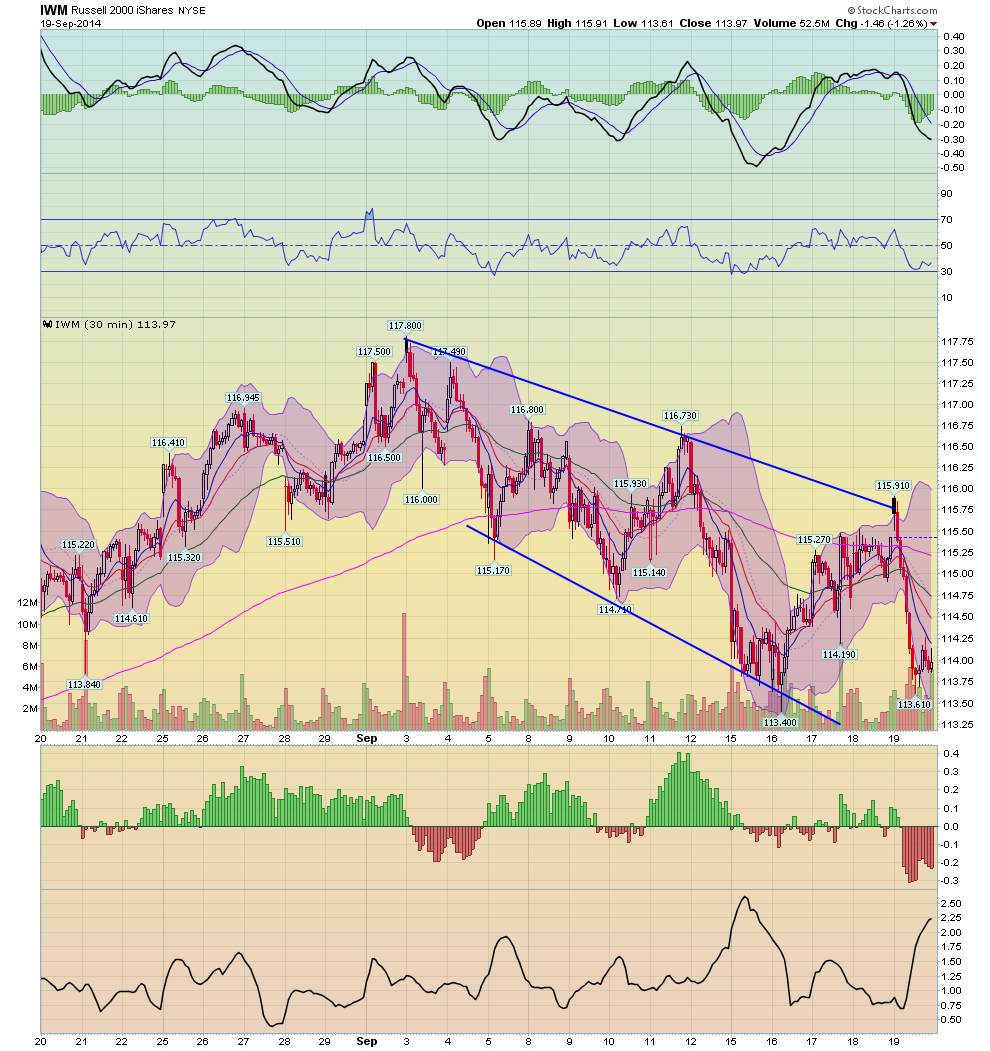 Compare the SPY price chart to the IWMS, which have been in a downward trend printing lower lows and lower highs since the beginning of September.  ﻿This is a pretty disciplined sell-off, meaning the bull/bear balance is only slightly balanced towards the bears.  But it also indicates that risk appetite is weaker than we'd expect, especially if we're anticipating a stronger move higher.
Finally, let's look at the weekly SPY chart: 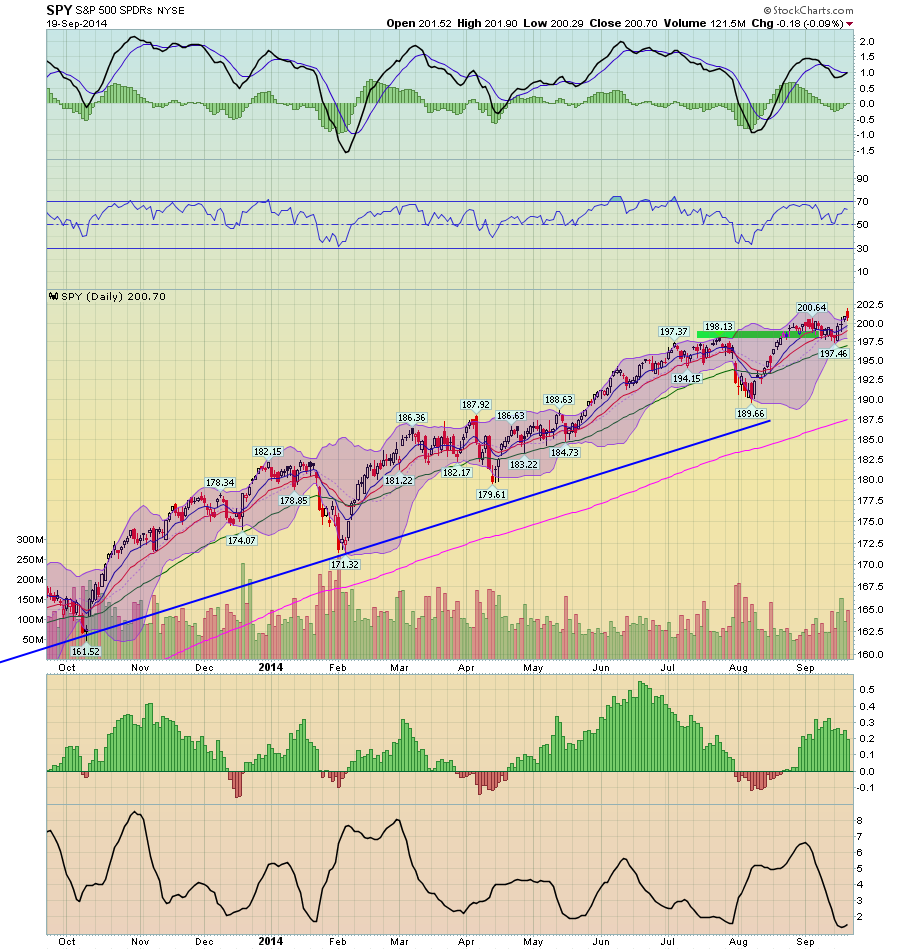 The overall annual uptrend is intact.  Prices consolidated over the past few weeks, but moved through upside resistance on Thursday.  The MACD is about to give a buy signal, and the RSI has room to move higher.  This chart is pretty bullish.  But remember the overall environment discussed above.  The market is expensive and there is clearly a diminishing risk appetite that will hold back gains.  Overall, we need more fundamentally bullish news such as corporate earnings growth, stronger employment numbers or overall GDP growth to keep moving consistently higher.
﻿
Posted by Unknown at 2:00:00 PM

A thought for Sunday: the boring devil of an economy you know


I have always wanted to give readers "value added" -- not just report on the data like you can read at 100 different sites, or expound on a worldview with (intentionally or unintentionally) cherry-picked data.  I think I'm pretty good at the economic version of what Wayne Gretsky famously called "skating to where the puck will be," and presumably you do too or you wouldn't be reading me!  Since it's Sunday so I can kick off my shoes and pontificate without having to document everything with data. I thought I'd update my view of the bigger picture, since it is something I haven't done in awhile,

1.  There is no political will to do anything to assist the economy, e.g., infrastructure repairs and upgrades, assistance to the middle/working classes.  Back in 2009, Bonddad and I jointly called for the creation of a new WPA to help ameliorate the worst unemployment situation in 75 years.  It become pretty clear by 2010 that none of the things an activist government might have done were going to happen, beyond the 2009 stimulus.  I haven't seen the point in arguing in favor of any progressive economic agenda items that not only aren't going to happen before 2016, they almost certainly aren't going to happen before 2020 as things stand now.

The best we can hope for in the foreseeable future is that Washington does no further damage to the average American's well being, with further spasms of austerity (e.g., cutting off extended jobless benefits) or downright recklessness (threatening to refuse to pay the US's bills).

The slow growth is the result of a number of factors:  the global race to the bottom, the ever-increasing concentration of wealth, continuing advances in automation, the secular increase in the price of Oil, and an aging population not only in the US but throughout the developed world (older folks don't buy nearly as much new stuff as younger folks who are making a new home and raising children).

3. While we are probably past the middle of the cycle, this is hardly shocking 5 years after the economy started to improve.  The typical spending patterns I would expect to see as the cycle wears on have happened - e.g., a slow decline in real consumer spending, and a general plateauing in the purchase of vehicles.  But that doesn't mean The End is Near.  In fact, one of the noteworthy things I've noticed in the last few months is the virtual disappearance of Doomer commentary.  It's so bad I actually have to go over and read Zero Hedge to make sure it still exists.

So let me tell you what I think reasonably could change the present dynamic for better or worse in the near future.

4.  What would make the economy come closer to "escape velocity?"  Is there anything that is reasonably likely to happen that could give the economy a second wind?  I see two candidates:

5.  On the other hand, what are the most likely trends that would cause an economic downturn?

At the moment, house prices are still increasing, but not nearly to new highs, and there is very little home equity withdrawal going on, so that is not a source of consumer funds.  On the other hand, stocks have been making new highs all this year.  This appears to be having a pronounced wealth effect among the affluent to wealthy households that own stocks, and is fueling consumption (although none of that is "trickling down" to the bottom tiers).

In conclusion, unitl one of the above scenarios finally tips the balance, growth will wax and wane.  I still think there will be deceleration in the remaining part of this year.  An uptick in the first part of next year looks more likely than a continued deceleration.
Posted by New Deal democrat at 8:30:00 AM