There were a number of important indicators that were nominally lower or flat for March that were up in real terms (including a big pop in wages), thanks to the effects of stalling gas prices on the consumer price index for March.

At the beginning of the year, I identified 5 trends that bore particular watching, primarily as potentially setting the stage for a recession next year.  Now that we have the first 3 months of data, let's take a look at each of them.
#5 Gas Prices
One potential pressure point on the economy is gas prices, which appear to have made a long- bottom in January of 2016. As they began to rise, consumer inflation has increased from non-existent to almost 3%.So the issue is, will they rise even further and drive inflation even higher?
So far this year, that has not been the case. Typically it has taken a 40% YoY increase in gas prices to shock the consumer.  While gas price increases did briefly approach that point, they have backed off considerably:

#4 The US$
Another potential pressure point on the economy is a big increase in the relative value of the US$, which was part of the shallow industrial recession of 2015.  The $ started to rise again after the November election.  Here the story is more mixed:

The resilience of the housing data has been the most positive surprise of the year.
#2 The Fed Funds rate vs. consumer inflation
If consumer inflation rose past the magic 2% Fed target, would the Fed chase it?  The Fed's preferrred measure is personal consumption expenditures, but consumer inflation YoY as of March was up +2.8%.  The Fed did duly hike interest rates:

The expectation seems to be that unless there is some surprising slowing, several more interest rate hikes are in store.  So far the yield curve (left graph below) isn't misbehaving (light red is last August, dark red is now): 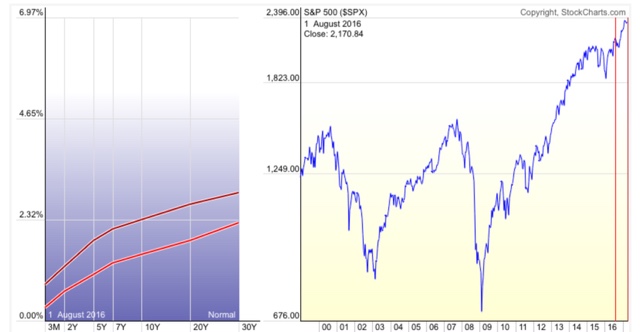 But it will be difficult to avoid a compression if not an inversion in interest rates should the Fed stay on its current course with several more hikes.
#1 Real retail sales vs. real average hourly earnings
The final graph comes from my "alternate" recession forecasting model which turns on consumers running out of options to to continue increasing purchases (i.e., no interest rate financing, no wage real wage increases, and no increasing assets to cash in). The long term relationship has been that sales lead jobs, and jobs lead nominal wage increases, but real sales vs. wages are somewhat more nuanced. In the inflationary era, through the early 1990s, YoY wareal wage growth actually slightly led sales. In the deflationary era that dates from the alter 1990s, if anything the two are a mirror image, but in every case but 2001 (where real wage growth just decelerated rather than declined), both have been negative going into recessions:

Focusing on the last 20 years makging the deflationaary era, at present with inflation up, real wages  are actually down YoY at this point:

I would expect to see both sales and wages stall out before the onset of the next recession.  So far, sales are holding up.
Bottom line: with the exception of the US$ against major currencies, and the consumer inflation rate, for now the signals from the data series I have highlighted are all still green.


Time for the monthly update of the Labor Market Conditions Index and JOLTs report.  Both of these give more in-depth data on the jobs market.  The reported lags one month, so this week's reports were for February.  While both of these have some merit as leading indicators, the former is recently constructed and back-fitted, so this is the first "real-time" business cycle it is reporting on.  The latter is less than 20 years old, and covers only one complete labor market cycle.  Bottom line: while both are useful, have grains of salt handy.

First, let's take a look at this morning's JOLTs report.  While most people focus on openings (blue in the graph below), it is not really "hard" data, since companies can advertise openings solely for the purpose of collecting resumes.  They might also not be receiving applicants because the pay they are offering is too low.  Thus, I prefer to focus on actual hires (red).  Anyway, here are both:

Both have trended up in the last couple of months, although not strongly. Overall, the trend in both has been sideways for about the last 18 months, reminiscent of 2005-06.  Like so much else, late cycle but not indicative of any imminent downturn.

The trend in quits looks a little more positive:

Turning to the Labor Market Conditions Index, this has been weakly positive or even slightly negative since the beginning of 2016:

As constructed, it has typically had negative values for about a year before any recession, and usually at least to -5 before one is imminent.  So no recession this year is indicated.

Oddly, FRED only shows the value of the m/m "change" in the index.  Doug Short has the history of the absolute values: 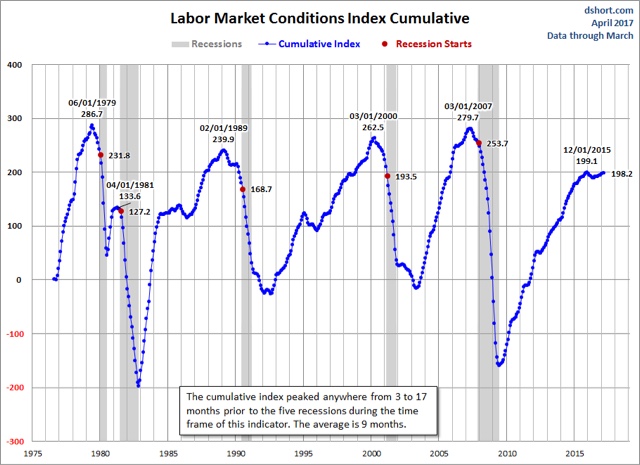 Note in the 1980s and 1990s, there were brief downturns without there being any recessions.  This coincided with Fed tightening and loosening within an expansion. What we've been seeing from this index looks once again like late cycle, but with no downturn imminent.

If Hot Air Had Any Journalistic Integrity, They'd Be Printing a Retraction

Jazz Shaw of the Blog Hot Air has routinely campaigned against the minimum wage.  Like most non-educated commentators, he uses a simple supply and demand model to support his assumption.  His logic works something like this: increasing the minimum wage means the cost of labor increases; increasing cost = declining demand.

Unfortunately, this model does not fully capture all the nuances of the minimum wage.  Alan Krueger was one of the first economists to note that increasing the minimum wage has macroeconomic benefits, the most of important of which is to increase income.  And consumers in the lower range of income are far more likely to increase spending in proportion to an increase in their wages.  (BTW: this is Keynesian 101: it assumes the marginal propensity to consume among lower incomes is higher).  You can read the full study here.

Now we have yet another study -- this time from the National Employment Law Project -- that finds the same thing.  The entire study is here.  But the following fact drives a stake through Mr. Shaw's argument: 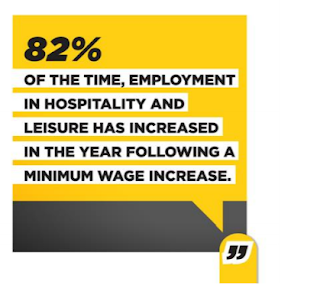 If Hot Air had any policy regarding retractions or corrections, they would print one.  Or, they would print their research that contradicts the above referenced papers.  But they won't do either because they have no ethics nor supporting research.  And while they have opinions, those opinions are clearly not supported by data.

Prime working age employment up, participation up (finally) - now how about wages?


The March jobs report finishes the first quarter, which make it easier to update some labor participation trends, which, along with wages, has really lagged in this nearly 8 year old expansion.

In order to eliminate the issue of the huge Baby Boom generation retiring, and to a lesser extent college and graduate students, we have some good data on the prime age 25-54 demographic.

Historically, labor participation continues to decline after a recession ends, and picks up after the employment to population ratio does.  Put another way, people come off the sidelines and enter the workforces once the unemployment rate declines significantly.  Here's the long term trend, comparing the YoY% change in each:

Now let's zoom in on this expansion:

As you can see, the employment-population ratio for prime age workers bottomed in 2010-11 while participation continued to decline until 2015!  Meanwhile the YoY change in the prime age employment to population ratio, shown in the first graph above, bottomed out near the end of the recession in 2009, while the labor force participation rate continued to decline until early 2011, almost 2 years later.

It is disconcerting that so long after the end of the Great Recession, participation is still lagging.

But if participation has been lagging (but finally improving) wages have lagged even more.

Let me start with a reminder that there appears to be a complex interaction between participation and wages.  In general, wages pick up a little after participation. BUT, if participation increases unusually rapidly, it will tend to drive down wage growth, as it did in the later 1970s and 1980s:

We have had a more rapid increase in participation in the last two years than at any time since 1989 with the exception of 1996 (red in the graph below), and that has tended to keep wage growth depressed:

It's counter-intuitive, but the history of the last half century suggests that wage growth will pick up as this increase gets absorbed. We'll see whether, at long last, labor finally gets a significant share of the increased wealth during this expansion.
Posted by New Deal democrat at 11:50:00 AM

International Week in Review
Posted by Unknown at 6:23:00 AM