Let's look at some macro level data (which does not include the latest employment report): 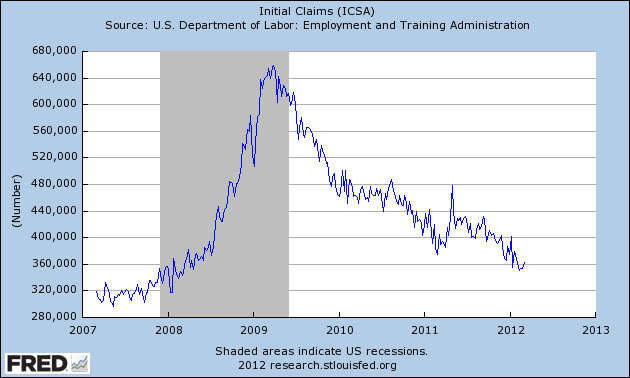 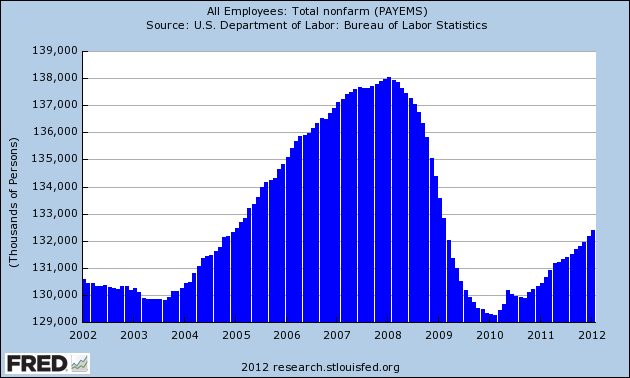 Total establishment jobs have been steadily moving upwards since about the middle of 2010.  While there is still a great deal of progress to be made, things are definitely on the right track. 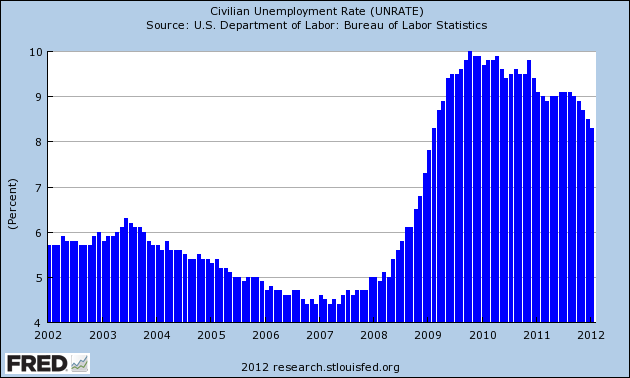 The unemployment rate, which at its highest point was at 10%, is still far too high, but is moving in the right direction.

Let's break the establishment picture down into goods producing, service and government jobs: 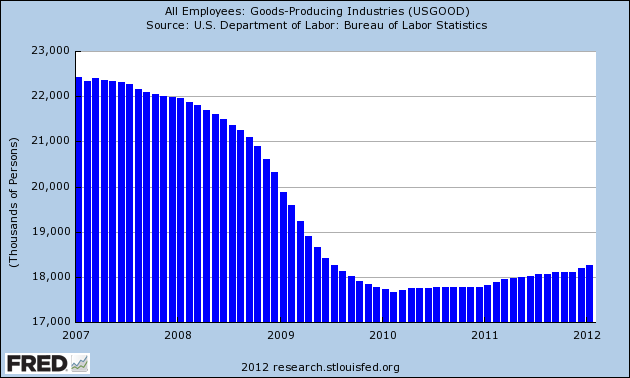 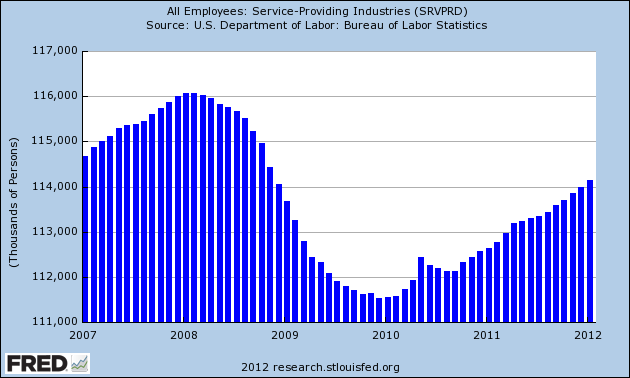 Service sector jobs are clearly where most of the job growth has been over the last two years. accounting for a little over 2,000,000 jobs added. 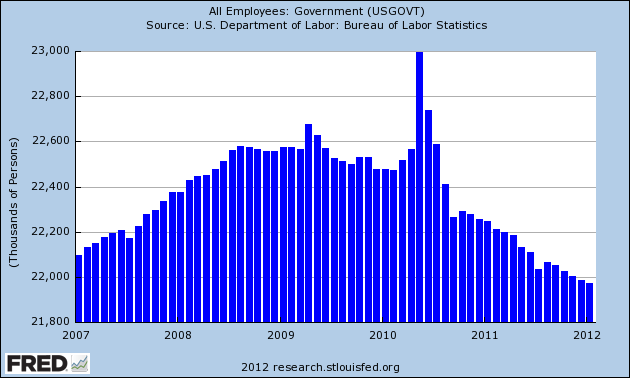 Note that government jobs continue to decline.  As I've stated before, I think this is the main reason for initial claims being at high levels for an extended period of time.

Now, onto the BLS report:


Nonfarm payroll employment rose by 227,000 in February, and the unemployment rate was unchanged at 8.3 percent, the U.S. Bureau of Labor Statistics reported today. Employment rose in professional and businesses services, health care and social assistance, leisure and hospitality, manufacturing, and mining.

First, overall these are good numbers.  We're over 200,000 in job growth and we're seeing broad based job growth.

The overall unemployment rate is clearly moving lower.  I've blocked off the establishment job growth chart into three areas.  At the end of 2010 and beginning of 2011 we see four of seven months increasing by over 200,000.  Then we see the rest of last year with sub-par growth.  This was caused by two events: Europe and high gas prices.  Over the last three months, we're back to where we were at the end of 2010/beginning of 2011.  The good news is Europe is less of an issue (at least for now).  Gas remains the wild card.

Let's turn to the household survey.


The number of unemployed persons, at 12.8 million, was essentially unchanged in February. The unemployment rate held at 8.3 percent, 0.8 percentage point below the August 2011 rate. (See table A-1.)

The number of long-term unemployed (those jobless for 27 weeks and over) was little changed at 5.4 million in February. These individuals accounted for 42.6 percent of the unemployed. (See table A-12.)

Both the labor force and employment rose in February. The civilian labor force participation rate, at 63.9 percent, and the employment-population ratio, at 58.6 percent, edged up over the month. (See table A-1.)

The number of persons employed part time for economic reasons (sometimes referred to as involuntary part-time workers) was essentially unchanged at 8.1 million in February. These individuals were working part time because their hours had been cut back or because they were unable to find a full-time job. (See table A-8.)

In February, 2.6 million persons were marginally attached to the labor force, essentially unchanged from a year earlier. (The data are not seasonally adjusted.) These individuals were not in the labor force, wanted and were available for work, and had looked for a job sometime in the prior 12 months. They were not counted as unemployed because they had not searched for work in the 4 weeks preceding the survey. (See table A-16.)

Overall, these are also good numbers.  First, note the rate of labor under-utilization is steady.  That's means that, at minimum, we're not getting any worse.  The LPR increased (much to the consternation of right wing "economic" commentators) as did the number of employed.  In fact, the household survey's employment numbers have been incredibly strong over the last few months. showing very strong gains.

Let's turn to the establishment survey:

In February, employment in leisure and hospitality increased by 44,000, with nearly all of the increase in food services and drinking places (+41,000). Since a recent low in February 2010, food services has added 531,000 jobs.

Construction employment changed little in February, after 2 consecutive months of job gains.
Over the month, employment fell by 14,000 in nonresidential specialty trade contractors.

Overall, employment in retail trade changed little in February. A large job loss in general merchandise stores (-35,000) more than offset an increase in January (+23,000). Employment in motor vehicle and parts dealers continued to trend up in February.

Government employment was essentially unchanged in January and February. In 2011, government lost an average of 22,000 jobs per month.

Again -- we see broad based gains.

Finally, we go to wages and hours worked:

Here, we'd like to see more improvement.  However, with a high unemployment rate, we're not going to get a lot of supply side related issues on wages or hours.

1. Like everybody else, I'm impressed with the upward revisions to December and January.  You don't get upward revisions like this in a weakening economy.  I suspect today's number will be upwardly revised as well.

2.  The manufacturing workweek, a leading indicator, ticked up another 0.1 to 41.0 hours.  Factory workers are working more hours than at any time in more than a decade.  This is a white hot number.

3.  The index of aggregate hours worked increased from 95.5 to 95.7.  Aggregate hours continue to outpace payroll reports, but are probably already beginning to be translated into a faster pace of increased jobs.

4.  The labor participation rate increased, even with more people entering the workforce.  This number is no longer bouncing along the bottom, but has significantly improved over the last half year or so.

But the most signficant overlooked number, in my opinion, is in the household report: