Weekly Indicators for February 6 - 10 at XE.com

Two leading indicators, one long, one short, turned a little more to the dark side this past week.
Posted by New Deal democrat at 9:08:00 AM

In the last several years, I have written a number of posts documenting the stagnation in average and median wages, followed by their improvement due to the steep decline in gas prices, for example here and here.  Since bottoming a year ago, gas prices have turned positive YoY, most recently up about 25%. Q4 2016 data on wages has been released, giving us a chance to take an updated look.

Let's start with nominal wages.  The first graph below shows the YoY% growth in each of the four measures:

While each is noisy, the overall trends are clear. First, in this cycle as in the last, wage growth declined coming out of recessions, then rose as the expansion continued.  Second, secularly there has been an undeniable slowdown in wage growth, which was 4-6% in the late 1990s peak, 3-4% at the 2000s peak, and so far in this expansion is no better than 2-3%.  I believe this is in part due to how weak the employment situation was for so long into this expansion, but also secularly due to shifts in bargaining power, as employers learn over time that employees can be retained with lower and lower annual increases in compensation.

Next, let's zoom in on the last 5 years:

Again, through the noise you can see that YoY wage growth was about 0.5%-2% in 2011-12, but has slowly improved to 2-3% in 2016.  That's the good news.  The bad news is, none of these measures of wage growth show any accretion of the gains during the entire last year: despite a tighter job market, nominal wage growth *remained* at the +2% to +3% YoY level throughout the year.

Now let's turn to the real, inflation-adjusted measures. Our first graph starts out normed to 100 for each measure in 2001.

With the exception of real compensation per hour (purple), none of the measures made any real improvement during the 2000s expansion. After a spike during the Great Recession due entirely to the collapse of gas prices at that time, real wage growth declined into the 2013 time frame, and rose significantly since -- again having much to do with the late 2014- early 2016 decline in gas prices.  Note the divergence between the mean measure of the average hourly earnings (blue) and median measure in the employment cost index (red), showing that gains have been skewed towards the upper end of the income distribution.

Finally, let's look at the YoY% real growth in the four measures:

Here the picture is not good at all.  After growing 2-3% in real terms during 2014-15, in 2016 real wage growth decelerated to only 0.5%-1.5% across the spectrum of measures.  Since gas prices were still declining in Q1 2016, it is likely that real wage growth YoY as of the end of this quarter will have almost completely stalled.

In summary, our broad measures of wages showed continued nominal and real growth in 2016, but nominally failed to show any further acceleration despite a tightening job market, and in real terms decelerated sharply and are on the verge of stalling altogether.  If my read on the labor market is correct -- i.e., we are in late cycle and YoY job gains will continue to decelerate -- and if inflation driven by gas prices and housing continues, the prospects for further meaningful wage growth for the broad mass of American workers during this cycle are dim.

The Senior Loan Officer Survey for Q4 was released on Tuesday.  I take a close look at what it shows in a post up at XE.com.
Posted by New Deal democrat at 8:00:00 AM


I continue to be unimpressed with the JOLTS Survey. Too many observers are, in my opinion, focusing on the soft, least important metric, "job openings," and paying too little attention to the hard numbers of actual hires and quits. Why? Because it is well-known now that many companies use phantom openings as a means to chum the waters looking for resumes.

To explore, let's look at job openings compared to the Undereemployment rate.  As the rate of job openings increases, we would expect to see a correlative decrease in underemployment.

There does appear to be a broad correlation between the two, when we measure the rate of change in each YoY:

But while the direction may be the same, in this expansion there have been a lot more job openings than there have been actual hires from the ranks of the underemployed.  To show you, in the below graph I've normed the data to show that in the last cycle, when the Underemployment rate was at 10%, job openings were at a 2.5% rate:

Turning to the specifics of the just-released December report, here are job openings (blue),  hires (green), and quits (red) since the inception of the series:

What should jump out at you is the flattening peak over the last year.  This is made more evident when we look at the same data YoY (averaged quarterly to cut down on noise):

All three metrics show deceleration,  and one - hires - is actually *down* YoY.  This is equivalent to what the JOLTS survey looked like in early 2007, 9-12 months before the onset of the last recession.

To be fair, when we focus on monthly data over the last year, it is clear that as to Quits, at least, the negative number may have been the result of an outlier reading in December:

In the one and only complete cycle since the series began, hires and quits peaked first, while YoY job openings held up until nearly the end.  This time around, it appears openings may have turned before quits.

Bottom line: hiring increasingly shows late cycle deceleration, and now quits *may* be following, although that has not translated into increased discharges yet.  Indian Summer continues for now.


A big relatively unnoticed concern over the last year has been the end of deflation due to the end of the decline in gas prices.  Coupled with really tepid wage growth, this is going to affect consumers, who are 70% of the US economy.

Gas prices aren't a headwind yet.  They have increased about 25% YoY.  In the past, it has taken a 40% or more spike YoY to create real downward pressure on the economy:

In January 2016, gas prices declined by about 4%, whereas this year they increased by about 3%.  This tells me that the NSA change in consumer prices should be about +0.3%, and the SA change about +0.1%.  That will bring the YoY change in the inflation rate to 2.3%.

Since nominal nonsupervisory wages are up 2.5% YoY (red in the graph above), this means that they likely have only increased about +0.2% in the entire last 12 months. The graph for real wages through December is below:

That real wages have stalled does not mean that the economy is on the cusp of rolling over, since consumers have other methods of coping, which will be the subject of another post.  But it isn't helpful at all.
Posted by New Deal democrat at 8:00:00 AM

Above is a chart of the "economic uncertainty index.  Here is a link to its components and methodology. 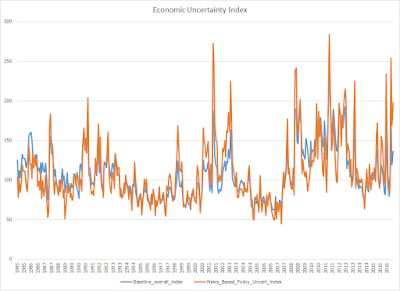 On one hand, it's not surprising that we're seeing a spike in this indicator.  The U.S. has a new president who is very unconventional.  But he also ran as an outsider who could spur the creation of 25 million jobs in 8 years.  Yet so far, it appears his actions are causing economic friction.  For example, today the Washington Post reported that 97 tech companies have filed a brief against Trump's travel ban.  Think about the uncertainty the travel ban injects into business decision making.

From business' perspective, there are several positive policy developments.  Trump is gutting Dodd-Frank, which will lower the cost of complying with regulations for financial companies.  And there is continued talk of a corporate tax code revamp, which, at the very least, will increase net income at the macro level.

But considering what a wild card the president is, I have to wonder if we'll continue to see this index at high levels for the foreseeable future.