My Weekly Indicators piece is Up at XE.com.  No major changes from last week.
Posted by New Deal democrat at 1:33:00 PM

Well, the May new home sales report is out.  The good news is, it did not confirm last week's negative reports in housing permits and starts.

An inversion of the yield curve has always signaled at very least a steep slowdown, and usually an oncoming recession. With the Fed hiking short term rates, where do we cut and now?

Below are two graphs, using the Dynamic yield curve tool from Stockcharts.com. In both cases the dark red line is the yield curve as of several days ago (post-hike). The light red line is the previous yield curve from the beginning of this year (first graph) and from last month (second graph): 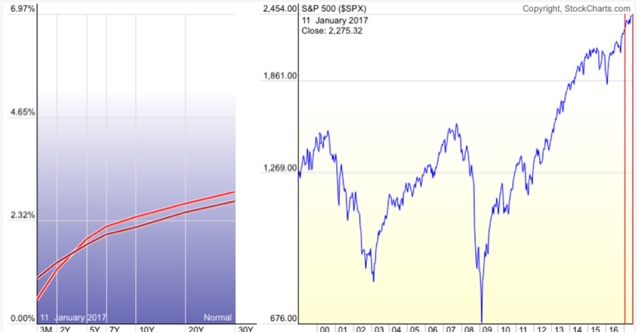 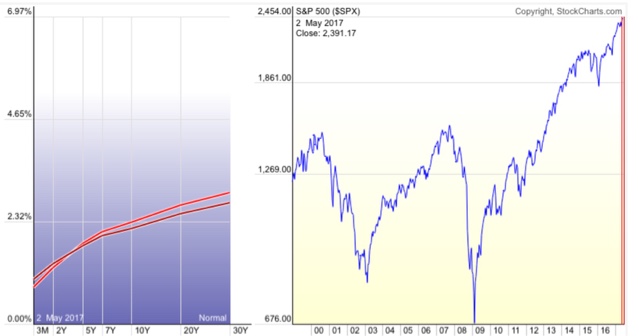 Note that the curve is pivoting around a point between the 2 and 5 year yields, at about 1.5%.

At this point, the yield curve is still positive, but if the trend continues, another two rate hikes should be enough to invert at least part of the curve.
Posted by New Deal democrat at 8:59:00 AM

It's a slow economic news week, but while we are waiting for new home sales Friday, we did get existing home sales today.

It was a good report. Not only was there an increase month over month, but it was the 3rd highest number for this entire expansion:

Even better, the three month moving average made a new high for this expansion.

But contain you enthusiasm, because even though existing home sales are about 90% of the market, they are the least economically important (because of all the activity that goes into building a new house).

The bad news is that prices made a new all time high, and inventory remains very constrained.

Absent housing, consumer inflation is running at only a little over 1%. The Fed raising rates is not going to bring on new inventory, and only make the inventory that does exist more expensive for mortgage borrowers.

So now we wait for Friday.

A further look at the housing slowdown

As promised, I have a further look at last week's poor housing permits and starts numbers, and especially in the context of interest rates.

May industrial production: no change in trend


This was a post I meant to put up Friday, but was pre-empted by the important housing news.

May industrial production came in unchanged. But that didn't stop Doomers, who had been silent about April's big increase in manufacturing, from trumpeting its 0.4% decline (go ahead, just try to find their acknowledgement of April's good number. You won't.).

So, let's put industrial production in perspective. First, here is the overall stat:

The uptrend since a year ago is still intact.

Next, let's break it down by manufacturing (blue) and mining (red):

The uptrend in each of these since a year ago also still looks intact.

Here is a bar graph of the m/m change in manufacturing:

The 0.4% decline is well within the range of normal monthly volatility.

So there's nothing in the May report which causes me to think that any economic downturn is imminent.

My weekly Posts Are Up At XE.com

International Week in Review
Posted by Unknown at 9:47:00 AM


It's Sunday, so I take a break from nerdy econ analysis and speak my mind.

Last November 9 we woke up to a living nightmare. The next four years were bound to be awful. The only question was, how awful?

The very tiny silver lining as of now is that, so far, it has been about as limited an awful as it could reasonably be.

The simple fact is, those things that the Executive could worsen all on his own, he is doing so.  But those things that require Legislative action or Judicial approval have either not materialized or have been stopped in their tracks.

The Executive has almost unlimited freedom of action in foreign policy, so it was a foregone conclusion that China and Russia were going to seize the opportunity to expand their power and influence, and they are doing so. Taiwan is already suffering diplomatically, and it isn't a good time to be one of the Baltic States either. The EU is looking aghast at Trump's view of NATO, and will probably vivify their moribund "European Defense Force" at least until 2021.

It is also pretty clear that Trump means to erase Obama from the history books, if for no other reason than Obama humiliated him at the 2011 White House correspondents dinner. So every Executive Order or program undertaken by Obama is being systematically obliterated. This includes deferral of action against illegal immigrants/undocumented workers. There's not much that can be done there, but even so, the Courts have occasionally stepped in, and Trump himself seems to want to allow the Dreamers to stay.

It was also always going to be a bad time to be a Muslim in the US, but even there, the Judiciary has stepped in, stopping Trump's travel ban.

And where Trump needs Legislative action, with the exception of the appointment of Gorsuch to the Supreme Court, so far there has been a big fat goose egg. I figured that Congress would repeal Obamacare in toto by January 31, and get around to the "replace" part approximately never.  Instead, due to Trump's own insistence on a replacement, as of now there is no repeal at all (the House bill is, right now, only a bill).

There's no tax cut for billionaires. There's no raiding of the SS and Medicare trust funds. The privatization infrastructure scam hasn't even gotten a hearing in Congress. And on and on.

Bottom line: there has been no legislation of significance out of the Trump/GOP Congress whatsoever. None. Zilch. Nada.

And we are over 30% of the way from the last Congressional elections in November 2016 to the next ones in November 2018. If they can manage this same record just twice more, we are almost home (maybe).

We are also 10% through Trump's four year term. In four weeks we'll be 1/8 of the way through.

As the lyrics of "Unchained Melody" say, "Time goes by, so slowly..." but time is passing and there will be an end.  In the meantime, so far things are as "least awful" as we could reasonably have hoped.