Among the entire array of indicators, only 3 were negatives this week.
Posted by New Deal democrat at 9:07:00 AM

We now have all of the February housing sales data.  With the exception of the least important series, the trend in each continues to move in the positive direction.

Variations on the Phillips Curve: unemployment and underemployment

This is part of a longer post I wanted to write, and if FRED didn't play so poorly with iPad I would put it all up.  But, having finished with my cursing, let me put up a truncated version now and follow up with another one sometime in the next week.

This picks up on my post from several days ago in which I noted that a fuller explanation of the cycle of wage gains should take into account the labor force participation rate for prime age workers.  So I thought I would show the differences in how the Phillips Curve (the tradeoff between wages and unemployment) looks depending on how completely we look at it.

Let's start with the unemployment rate (bottom scale) vs. YoY nonsupervisory wage growth (left scale) since the series started in the 1960s:

It's pretty clear that there are two regimes, higher vs. lower wage growth (top vs. bottom).  And if you were looking for a clean relationship in which lower unemployment equals higher wage growth, it ain't there.

In each case, once unemployment gets low enough, increased wage growth does kick in.  But before that, we see wage growth falling as unemployment increases during the recession -- and continuing to decrease in the earlier part of the recovery thereafter while unemployment remains relatively high (over 7% or so).

Here's the same scatterplot for the U6 underemployment rate:

The traditional Phillips Curve gained prominence during the post-WW2 era when unemployment remained relatively low for nearly 30 years.  Now we can see that it is only part of the story.  It only holds true when the unemployment and underemployment rates are low enough. At higher un(-der)employment  rates, whether going into or coming out of recessions, wage growth decelerates even if unemployment or underemployment are decreasing.
Posted by New Deal democrat at 12:36:00 PM

A look at yield curve compression

Since the mid-1950s, an inverted yield curve has been perhaps the single most deadly harbinger of a recession in the next 1-2 years.  The most typical measurement has been the spread between 10 year and 2 year treasuries:

Typically these inversions have happened because the Fed raised interest rates in an effort to tame inflation deemed to high. Thus, because we are in a very low inflation and interest rate environment, I suspect this version of the yield curve is one of the most likely long leading indicators to fail to signal before the next economic downturn.  Most notably, the yield curve between short term and long term bonds never inverted at all between 1931 and 1954, as indicated by calculating the spread of the archival "long term government securities" data with 3 month treasuries:

My suspicion is -- and here unfortunately I do not have any old data to compare with -- that a compression at closer points along the yield curve is likely to be a more accurate signal in this environment.  To show you why, let's take a look at the spread between 30 year and 10 year treasuries (blue in the graphs below), 10 year and 5 year treasuries (red), and 5 year and 2 year treasuries (green).

The first thing I want to point out is that in advance of all recessions in the last 40 years, yield curve inversions happened across the board.  All three measures inverted.

Secondly, a compression of all three measures on the order of +0.5% or less was associated with stock market corrections (in the case of 1987, a crash!), but not an outright recession in the near future.

Finally, the most likely measure to invert, including a number of "false positives" for recessions, was the 30 year minus 10 year measure.

With that in mind, let's focus on the last 5 years:

We can put this information together by calculating the average spread among the three measures, by taking each value, adding them together, and dividing by 3.  When we do so, here's what we get:

No matter how you look at it, at least compared with the last 40 years, no aspect of the yield curve is signaling any danger now.

But if we suspect that it is not necessary for the yield curve to outright invert before the next recession (noting how little of an inversion there was in 2006 before the 2008 recession), then at least we can raise the caution flag in the event that either one or both of the following two things happens: (1) all three term measures declined below +0.5%; and/or (2) the average of the three term measures declines to +0.3% or less.

It is certainly not a perfect work-around.  Although the data series are different, no compression at all between long term and 3 month securities occurred before the 1945 demobilization recession, nor before the severe 1938 recession (which appears to have been caused fiscally rather than by Fed action).

But even so, if we think that this low interest rate and inflation environment will function more like that of the 1920s-early 1950s, then measuring yield curve compression across maturities will at least keep us on our toes.


Wage growth for nonsupervisory workers nominally has been stuck in the +2.3% to +2.5% range (or worse) for three years.  Why?

Over the weekend I was cleaning out some old graphs, and came across this one from the Atlanta Fed, suggesting that the Phillips Curve (the tradeoff between unemployment and inflation) is very much alive, with the tweak that the amount of wage growth follows a decline in the unemployment rate with a one year lag: 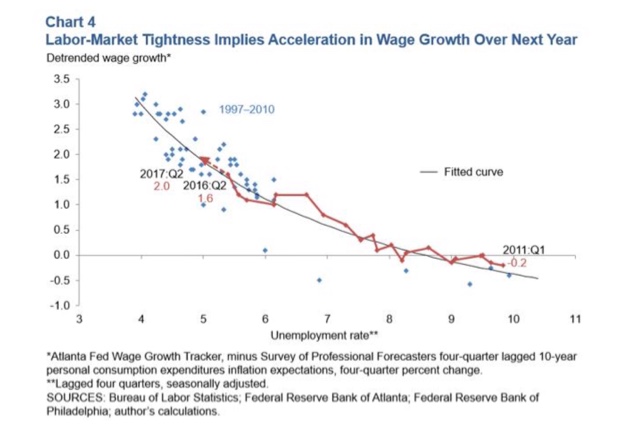 The red line is the progression of the Phillips Curve since the beginning of 2011. The dotted line indicates that the Altanta Fed's model was calling for a significant acceleration of wage growth between the spring of 2016 and spring this year.  [NOTE: all of the discussion in this post is about nominal, not inflation-adjusted wage growth, which has an awful lot to do with the volatility of gas prices.]

As noted above, wage growth has been stuck at between 2.3% YoY and 2.5% YoY with some (mainly negative) exceptions since the end of 2013.

Using the U6 underemployment rate to capture the broader picture doesn't change the outcome:

So, what's going on?

I suspect that the change in the labor force participation rate (i.e., that portion of the population actually in the job market, whether employed or unemployed) is the answer.

When I use the labor force participation rate for the prime working age population (ages 25-54) (blue) and measure that YoY vs. wage growth, even going all the way back over half a century to 1964, here's what I get:

With the very significant exception of most of the 1980s, the trend in prime age labor force participation appears to lead the trend in wage growth by one to two years.

What is most interesting is that in the era of labor force bargaining power (up until about 1982), a big increase in the labor force lead to a considerably larger amount of wage growth. Once labor's bargaining power was broken during the early part of the Reagan Administration, the big secular  increase in labor force participation did not show up as wage growth inflation, but rather as more job growth with outright *decreases* in the average hourly wage.

Note further that since the late 1980s, twice an increase of +0.6% YoY in prime age labor force participation has led to nominal wage growth of +4.0 YoY about one year later.

What is interesting is that over that entire time, average employment gains over each period have not varied that much.  What *has* happened, especially notably with those of prime working age, is a temporary pause in the decline in early 2014 and 2015, coincident with the first stalling and then decline in wage growth, and then a surge of participation in 2016, especially during the first half of the year.


To put this in perspective, the participation among the prime 25 - 54 age group plateaued beginning in 1989 (after the secular rise due to women entering the labor force):

So here is the YoY change in the participation by those in prime age since that time:

This surge in competition for new jobs acted to depress wage growth.

If the long-term graph comparing wage growth and the prime age LFPR is correct, however, and particularly if the same pattern of the late 1980s and 1990s is followed, then the surge in the LFPR does portend a significant acceleration in wage growth for nonsupervisory employees -- finally -- later this year.  That the U6 underemployment rate has declined significantly again in the last 3 months is supportive of that suggestion.