Weekly Indicators for December 12 - 16 at XE.com

As usual for this time of year, there is lots of seasonal volatility. That being said, the recent surge in positive readings for coincident and short leading indicators came to a halt.  Maybe it's just noixe, we'll see.
Posted by New Deal democrat at 9:47:00 AM

Tell Me Again How Oil Extraction Is the Panacea for Employment Growth?

Let's assume a 4-1 multiplier effect -- for every 1 oil extraction job created, 4 additional jobs are created.  That would only be a total of 320,000 jobs -- about 2-3 months of job gains at the current pace of creation.

There's just not much here from an employment perspective.


This is one of those days where the St. Louis FRED is slow adding the new data, so no snazzy graphs, BUT ...

This morning's housing data was a positive, even though it generally retreated from last month.

1. Single family permits made another post-recession high.
2. Total permits were over 1200/month for 3 months in a row, the first time that has happened in 9 years.
3. With the exception of the 3 month period including June of 2015, which saw big distortions due to multifamily permits issued in NYC to be included in an incentive program, this was the highest 3 month average for permits in 9 years.

The only negative was that actual housing starts retreated, and the 3 month average was no better than run of the mill for this year.  Since I favor the less volatile permits metric, and discount the NYC distortions, on balance this month was a significant positive.

I expect positive readings to continue for the next several months as last July's post-Brexit lows in interest rates continue to show up in new housing.  The negative whipsaw from the increase in rates since the US presidential election will start later.
Posted by New Deal democrat at 10:41:00 AM

Yesterday's Fed rate hike and this morning's CPI both support the idea that 2017 is likely to feature typical late cycle inflation -- being chased by the Fed.

A Conservative Commentator's Technical Analysis of the SPYs 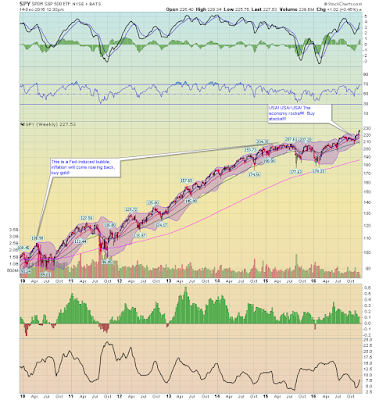 
At the beginning of this year, I identified graphs of 5 aspects of the economy that I particularly wanted to watch.  Now that the year is ending, let's take one final look back.

The Fed attempted to embark on a tightening regimen last December.  The question became, would the yield curve compress or, worse, invert, an inversion being a nearly infallible sign of a recession to come in about 12 months.  It turned out that the weakness in the world economy plus Brexit put the Fed on hold (until now) and only caused a moderate compression at the long end -- which has now reversed:

The bottom line is that the recession fears based on an allegedly compressing yield curve were unfounded.  Alll year long he yield curve remained quite positive when seen in a historical perspective.  Presumably the steepening since the US Presidential election, as traders consider a stimulus that may be inflationary, will sideline the clams of DOOOM from this particular metric.

Here there was a big change, even with the surg-ette since the election:

Against all currencies, the US$ remained in a range of unchanged to +3% YoY  - a  more  typical if still elevated range.  Against major currencies, the US$ actually was down YoY for most of this year..   This was good news.  It may be changing in 2017.

An elevated ratio of business inventories to sales means that businesses are overstocked.  This has frequently but not always been associated with a recession.  I have been using the wholesalers invenotry to sales ratio, since it has fewer secular issues.  This was perhaps the  most bearish graph of all one year ago, as it was in a range that frequently coincided with recessions.  It made a peak early this year, and declined slowly thereafter -- until the October report released last week:

The decline from peak accurately indicated that the "shallow industrial recession" of 2015 was ending.  Even better, decomposing sales (blue in the graph below) vs. inventories (red) shows us that sales have increased smartly while inventories continue to decline - a bullish sign typically seen in the first year after the end of a recession:

While 2015 saw a big improvement in involuntary part time employment, this trend completely stalled this year, with the sole exception of last week's report for November:

We are still at least 1,500,000 above a "good" number.  Worse, this kind of stall is something that we see as a cycle is approaching its peak.  This failure to make further progress is a big concern about the labor market going forward.

The single worst part of this economic expansion has been its pathetic record for wage increases. Nominal YoY wage increases for nonsupervisory workers were generally about 4% in the 1990s, and even in the latter part of the early 2000s expansion.  In this expansion, however, until recently nominal increases  averaged a pitiful 2%, meaning that even a mild uptick in inflation is enough to cause a real decrease in middle and working class purchasing power.
There is increasing consensus that the primary reason for this miserable situation has been the persistent huge percentage of those who are either unemployed or underemployed, such as involuntary part time workers as discussed above.

This expanded "U6" unemployment rate ( minus 10%)  is shown in red in the graph below, together with YoY nominal wage growth (blue) (minus 2%):

In the 1990s and 2000s, once the U6 underemployment rate fell under 10%, nominal wage growth started to accelerate.  U6 has been under 10% for close to a year,, and while there has been some mild improvement off the bottom for wage growth, it has never even come close to 3% YoY

More than anything, the US needs real wage growth for labor, and the present nominal reading of  2.4% still isn't nearly good enough.  With the expansion in deceleration mode well past mid-cycle, it is not clear at all how much further improvement we are going to get before the next recession hits.

To close out 2016, three of the concerns -- the yield curve, the inventory to sales ratio, and the overly strong US$ -- abated at least in part.  The tow concerns I had about workers and their wages, however, both remain elevated, and are not encouraging, particularly if the next recession should happen within the next couple of years.
Posted by New Deal democrat at 12:24:00 PM