Weekly Indicators for December 4 - 8 at XE.com


- by New Deal democrat
My Weekly Indicators post is up at XE.com.

The big trend is in the near term forecast, while the general underground movement is in the long term indicators.
Posted by New Deal democrat at 10:17:00 AM 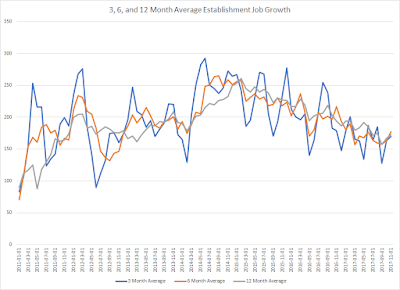 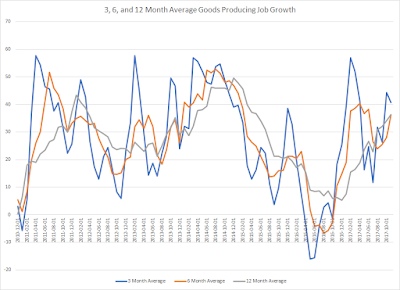 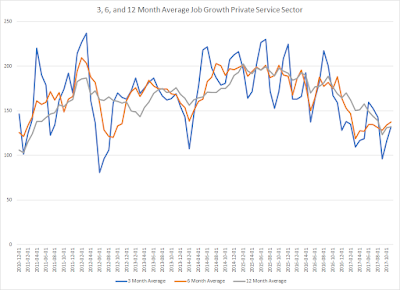 A look at the short leading indicators - December 2017

What will the economy look like over the next 3 to 6 months?  I take an updated look over at XE.com.
Posted by New Deal democrat at 9:01:00 AM

The University of Michigan's long-run inflation expectations (top chart) and the 10-year CMT-10 year TIPS rate (bottom) chart are both declining.  The University of Michigan's estimate has always been a bit high; it was 3-3.5% in 2012-2014 and has moved lower to 2.5%.  The bond market measure is lower but probably more accurate.  Either way, both have moved lower by about 50-65 basis points in the last 3-4 years, which has important ramifications for Fed policymakers. 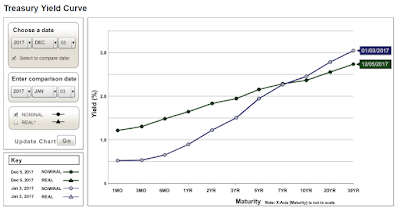 Since the beginning of the year, the curve has definitely flattened, with most of the movement coming in the short-end of the curve.

A video introduction of the new Richmond Fed President.

And Explanation of the New Bond Market Conondrum

Why is the short-end rising and the long-end falling?

An astute progressive critique of the Trump Administration from ... CNBC?!?


John Harwood of that well known lefty outlet, .... ummm, CNBC .... writes this morning that "Trump has Forgotten his 'Forgotten People':"

He forgot them on health care. Jettisoning his campaign pledge to "take care of everybody" regardless of income, he proposed cutting federal health subsidies for the hard-pressed blue-collar voters who put him into office.

He forgot them on financial regulation. Abandoning talk of cracking down on Wall Street executives who "rigged" the economy to hobble the working class, he seeks to undercut the Consumer Financial Protection Bureau ....

And he forgot them on taxes. Discarding his vow to reshape taxation for average families at the expense of rich people like himself, he's working with Republican leaders to hand the biggest benefits to corporations and the wealthy.

To the contrary, his budget includes big cuts to Social Security disability program. Meanwhile his much-vaunted infrastructure plan has 'failed to materialize."

But, Harwood points out:


The president hasn't forgotten everything. In lieu of big financial benefits, Trump has steadily given "the forgotten people" one visceral commodity[: ]  affirmation of shared racial grievances.

I think this is a good summary of Trump's domestic policies as revealed by the past year.  On social issues, he has governed exactly as he promised during his campaign, issuing a de facto ban on Muslim immigration, unleashing ICE against Latinos, and fulminating against protesting black NFL players.

But on economic issues he has behaved exactly like a standard issue country club republican.The requirement that the GOP enact a "replacement" for Obamacare? Gone. Preventing the offshoring of manufacturing jobs? Gone. Enacting at least something like a tariff at the borders? Gone. Actually *doing* something about the opioid crisis, which is strongly correlated with areas of economic distress (as opposed to lip service)? Nothing.

On the one hand, the events of the last 40 years have pretty thoroughly disproved the belief of the young Governor Bill Clinton of Arkansas that moving to the center on economic issues would enable democrats to enact progressive social policies. Clinton himself was thrown out of office after his first term, during which he made those remarks to David Broder. To the contrary, for many working class voters social issues are a filter through which a vote-seeker must pass before they will listen on economic issues. Whether intentionally or not, in a strictly partisan sense Trump is behaving in way that is smart (probably a total accident, I know).

On the other hand, Mitch McConnell just gave an interview claiming that the economy will be helped in 2018 by the tax "reform" that is on the verge of being enacted.  But since the average gain to the bottom 80% of households is going to be on the order of $100/year (or $2/week), and since people react much more strongly to the incurring of actual losses (like the loss of the deduction for state taxes, let along what terminating the mandate is going to do to health care costs; and since the decelerating long leading indicators suggest the underlying economy will be weaker at the end of next year compared with its strength now; I suspect events will not unfold next November in accordance with his hopes.

The latest ISM reports are out and both show broad strenght.  The new orders and production component of the manufacturing report were very strong (up +.6 to 64 and +2.9 to 63.9, respectively).  The anecdotal comments were very bullish: 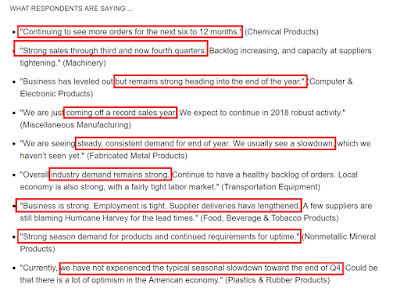 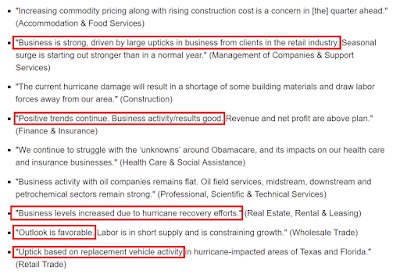 Both of these indciate strong future GDP growth, which we also see in the latest Nowcasts from the Atlanta and NY Fed: 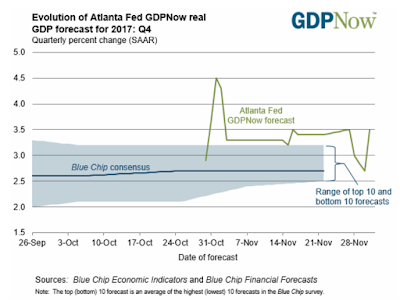 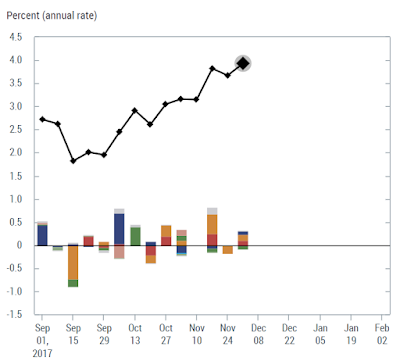 The short-end of the corporate market has risen from 1.91% at the beginning of September to 2.34%.  That's a pretty sharp move for shorter-dated debt.

The 3-5 year section of the corporate market has risne from 2.36%-2.76%.  But current levels are still below previous interest rate highs. 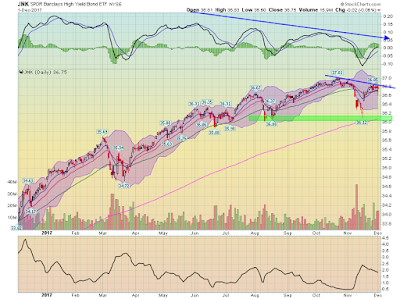 The JNK ETF is consolidating in a triangle pattern 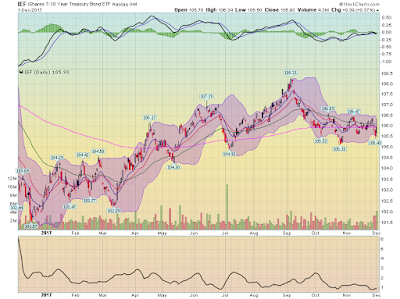 My Weekly Columns Are Up At XE

US Economic Week in Review