One of the great benefits of having multiple equity averages is that they almost always confirm each other; for example, when the SPYs rally, the QQQs follow suit which implies the markets are most likely moving higher.  But this week we have a fascinating situation: the QQQs rallied, the SPYs moved sideways and the IWMs fell.  This essentially gives everybody from the most bullish to the most bearish something to base their opinions on.
Let's start by looking at the SPYs: 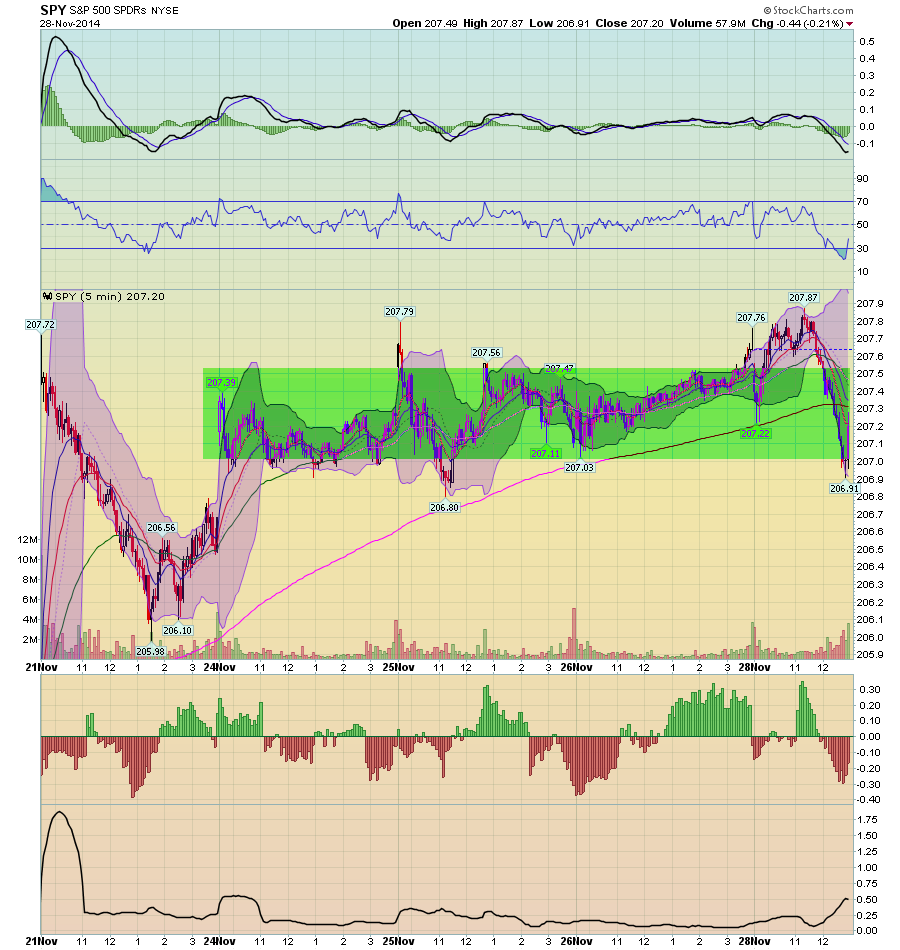 First of all, remember this was a holiday shortened week with a shortened trading session on Friday.  But for most of the week prices remained in a narrow area between ~207 and 207.5.  Prices moved higher on Friday, but then trended lower for the last half of the trading session. 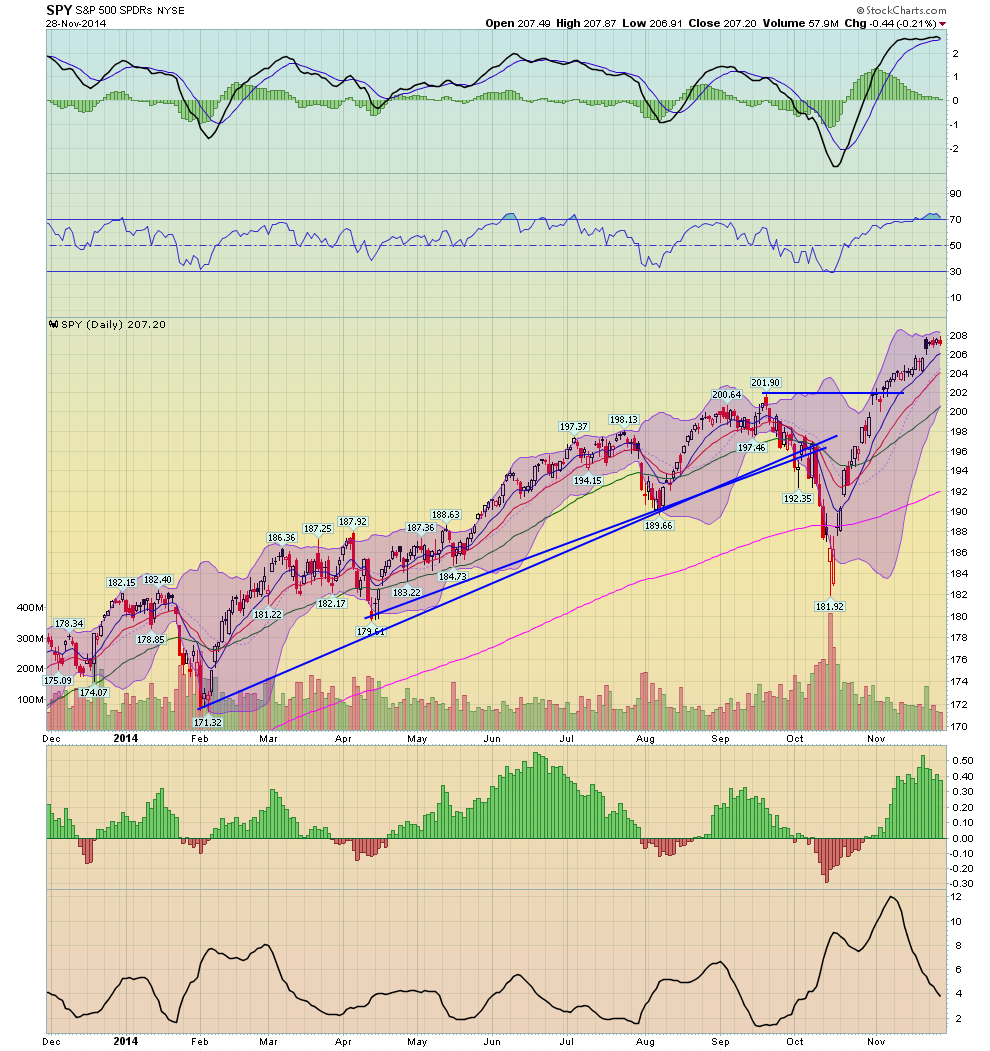 The daily chart shows prices gapping higher a week ago Friday in reaction to the ECB and PBOC adding stimulus followed by prices moving sideways. 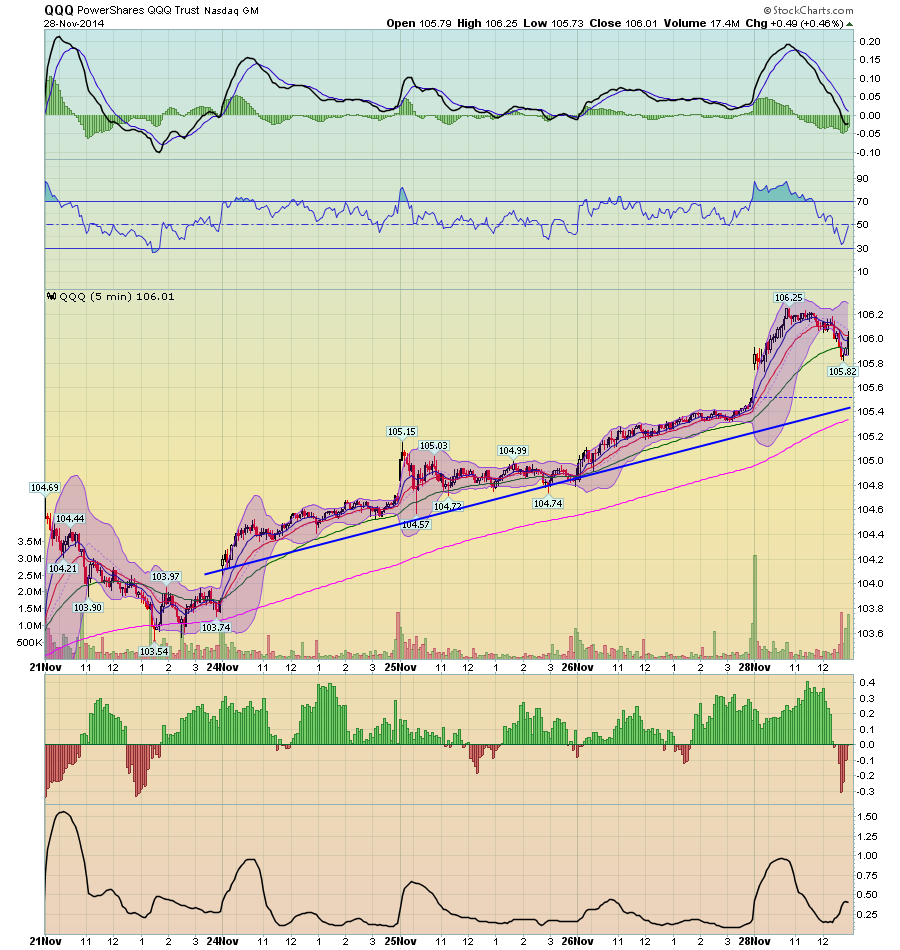 In contrast we see the QQQs, which moved higher for the first half of the week, gapped up on Friday's OPEC news and then sold off to a price near their open on Friday. 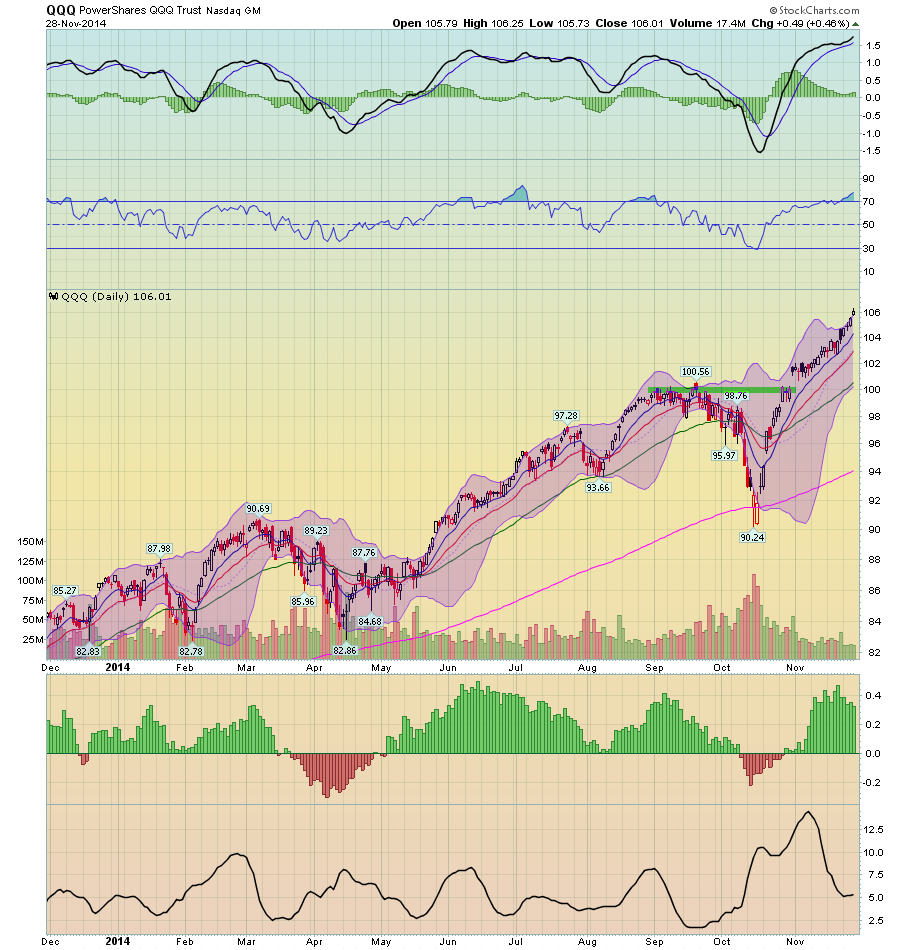 But on the daily chart prices clearly remain in an uptrend. 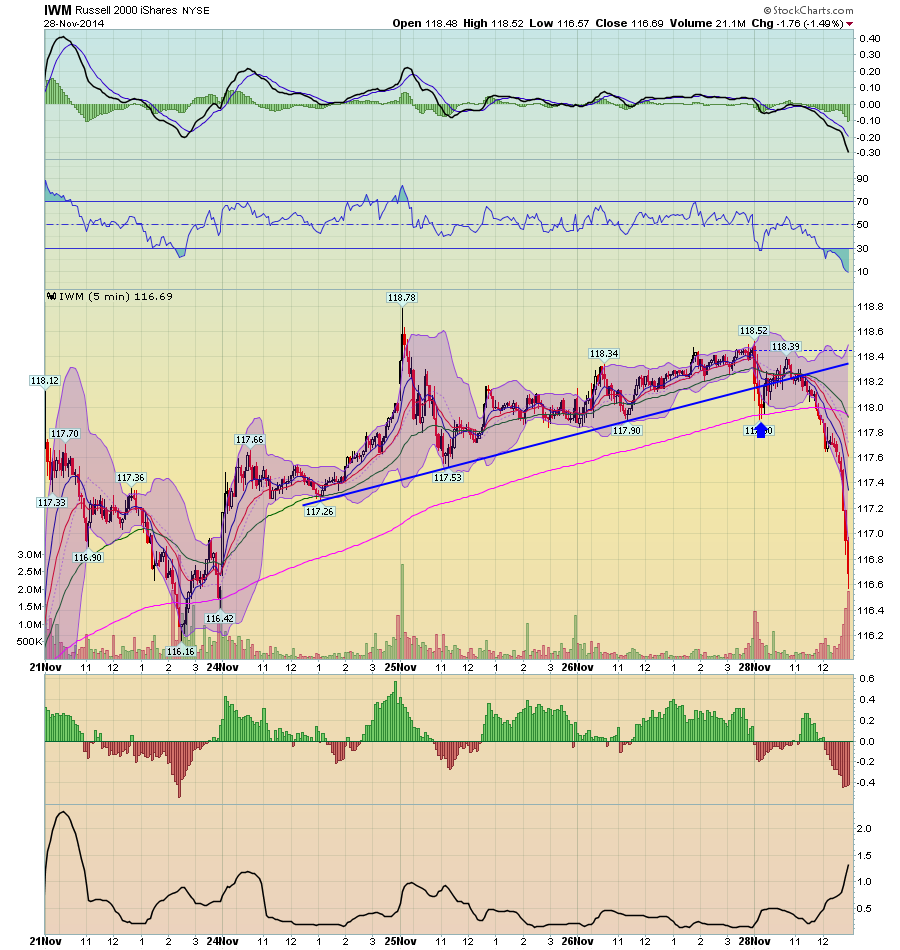 The IWMs mirrored the QQQs for most of the week, printing a slow by solid rally.  However, on Friday, prices sold off sharply, closing near their lows for the shortened trading week. 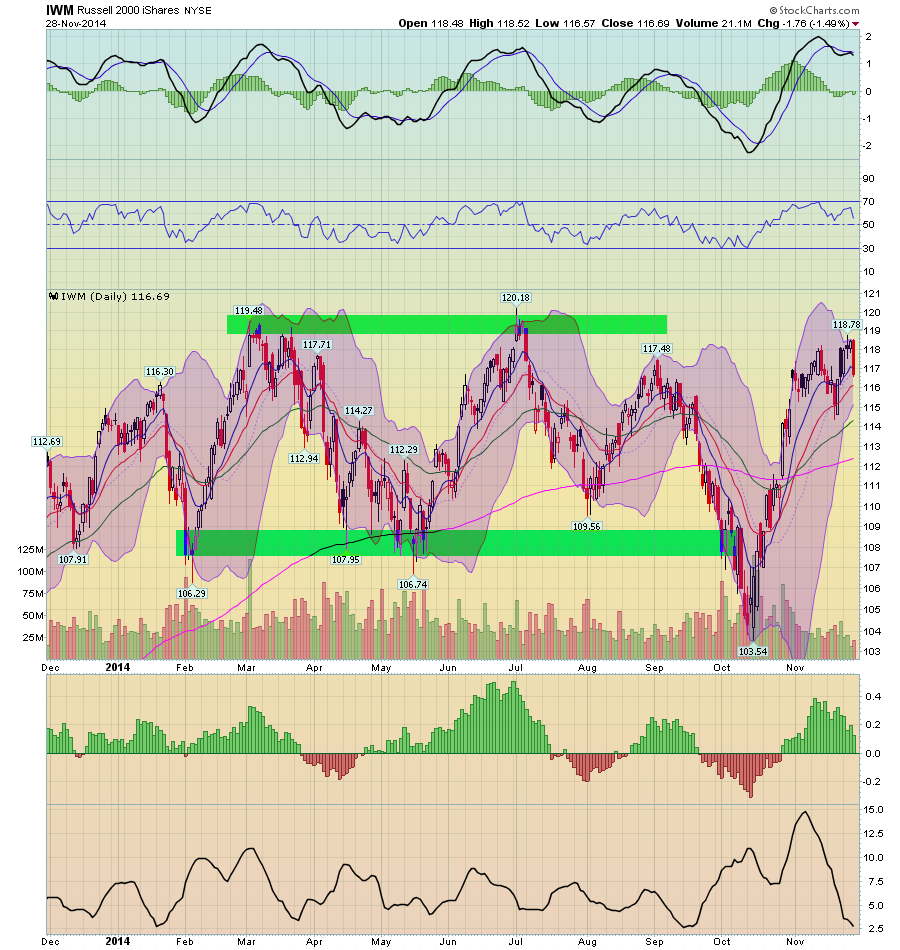 The daily IWM chart shows the sharp price drop on Friday.
So -- what does all this mean?
Let's begin the analysis by noting that odd things are more likely to happen in a holiday shortened week because there are fewer traders in the market.  And the sharp sell-off on the IWMs was most likely caused by no one wanting to hold a position over the weekend as a result of chaos in the oil market.  Assuming that to be the case, the most logical conclusion is the QQQs are driving the market higher and they will pull the SPYs and IWMs up over the next few weeks.  This makes more sense considering the overall stimulating effect of lower oil prices on the economy as a whole (which was also confirmed by the transports gapping higher on Friday as well).
But at the same time, we're still dealing with the limiting factor of a fairly expensive market as shown by this table from the Wall Street Journal: 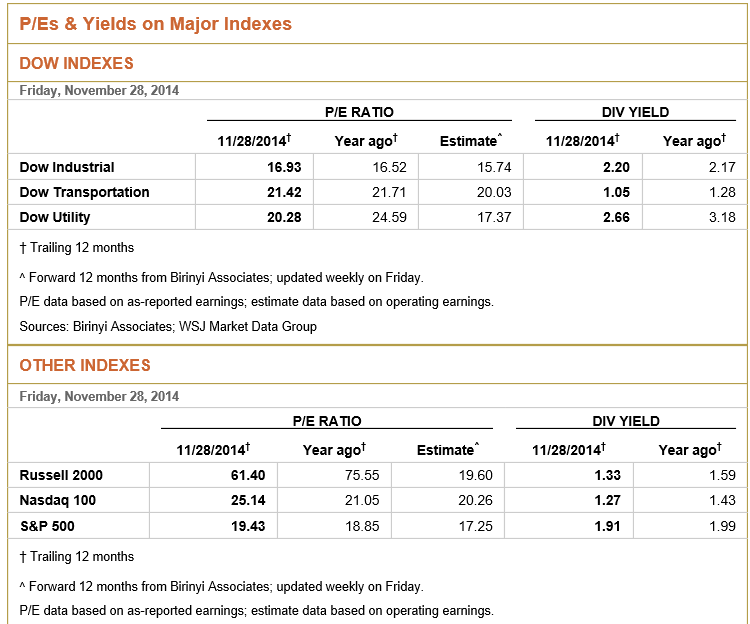 The Dow is at 17 while the S&P is at 19.4 and the NASDAQ is at 25.  All three of these readings are high from a historical perspective and limit upside advances.
Posted by Unknown at 10:10:00 AM

Weekly Indicators for November 24 - 28 at XE.com

There was more than one very sharp positive.  But a few cracks appeared in the facade as well.
Posted by New Deal democrat at 9:03:00 AM

Happy Thanksgiving - and an economic fact to be thankful for

Here is a little wonky economic thing we can be thankful for.  Since the end of WW2, Typically real GDP growth (blue) outstrips job growth (red) by about 2% on an annual basis: 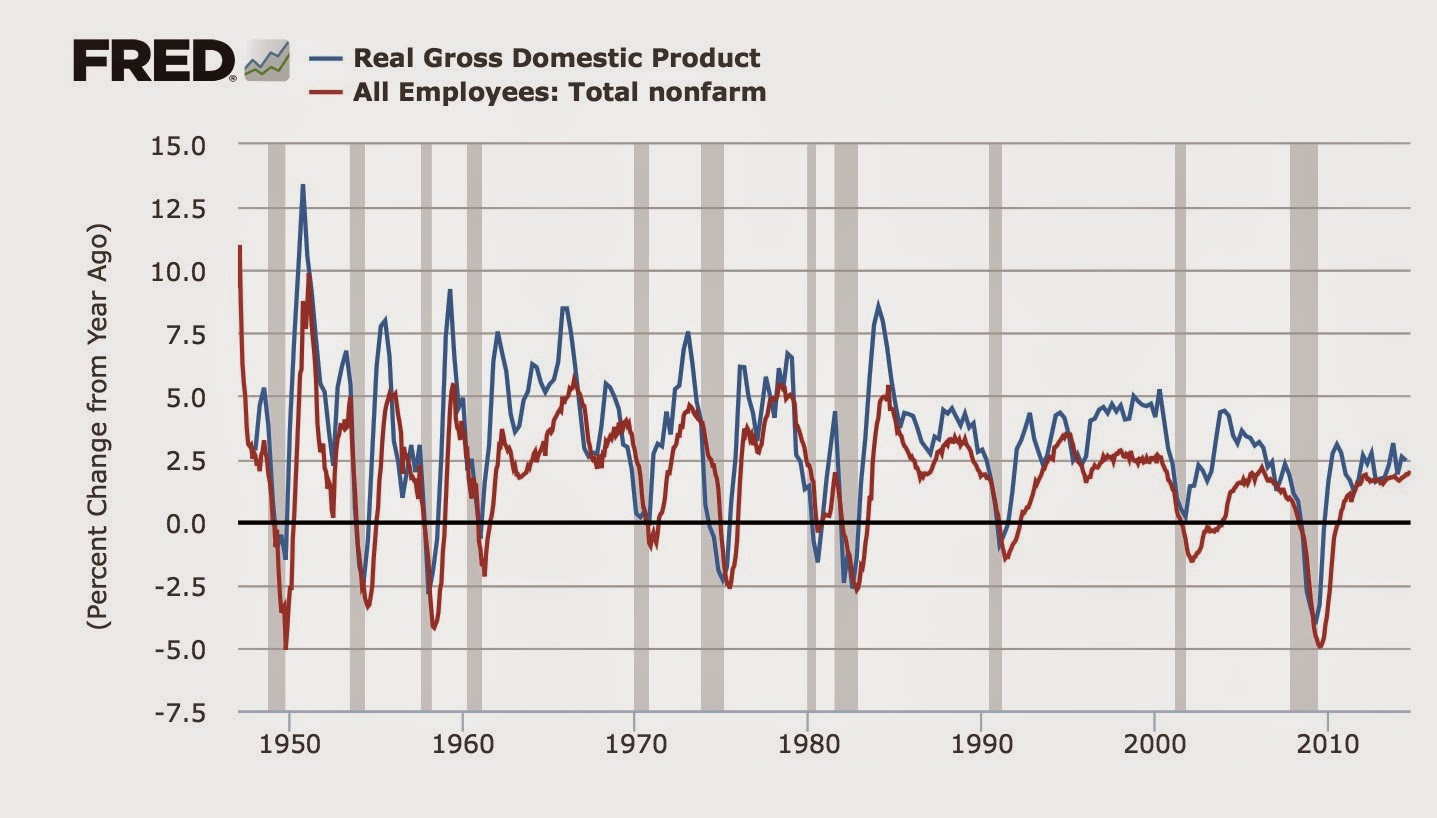 But in this expansion, GDP growth has only exceeded job growth by about 0.5%.

If the usual relationship held in this expansion, we would only be adding about 50,000 jobs a month instead of 200,000 jobs a month. We would have added 1,800,000 fewer jobs in each of the last 3 years than we actually have.  That is something to be thankful for.
Posted by New Deal democrat at 8:50:00 AM

A note about the housing market for October

A slew of housing data for September and October was reported yesterday and this morning.  I'll try to have a long, more involved piece either on Friday or Monday, but in the meantime let me give you a few comments.

To begin with, let me reiterate that I pay so much attention to this market because it is the single most leading sector of the economy.

When interest rates increased by about 1.5% in mid-2013, I forecast that the housing market would stop growing and would even turn down this year.  That it did, making a trough at about the end of last winter.  Since then it turned up, but only at a very low rate.  Generally multi-unit properties are being construted at a slightly faster rate than single family homes, which have stagnated.  Meanwhile prices generally have continued to appreciate, although there are signs that these too may actually have turned down earlier this year before starting to appreciate again.

The latest data continues that trend.  Last week we already found out that while the more volatile housing starts number was deemed slighly disappointing, housing permits (which tend to be about a month ahead of starts) made a new post-recession high.  Today single family home sales were reported equal to their post recession high, made a little more than a year ago.  For the last few months they have been generally slightly positive YoY.  The less important existing home sales were positive YoY for the first time in many months yesterday.  Pending home sales declined from September, but were also have turned postive YoY.

All of the house price numbers are positive YoY.  The Case-Shiller index, however, has failed to make a new seasonally adjusted high since April.  It did increase month over month.  The median home prices of both new and existing home sales appear to have both re-accelerated after making a trough during the third quarter.

Mortgage rates continue to decline, with 30 year rates under 4% again.  This tells me that home sales will continue to improve, and are likely to improve a little more vigorously, in the months ahead.  And because housing is such a leading sector, this has made me increasingly optimistic about the economy, jobs, and wages next year.

The BEA's revised release for 3rd quarter GDP included its calculation of corporate protifts, which rose 1.5% over the 2nd quarter, and once again made an all time high.

This is both good news and bad news.

The good news is that corporate profits, deflated by unit labor costs, also made a new high. This is a long leading indicator, meaning that it usually starts to decline one year or more before a recession starts. This in turn means that more jobs should continue be added to the eonomy over the next year.  Companies with shrinking profits do not hire new workers; companies with increasing profits do.

The bad news, of course, is that corporate profits continue to monopolize virtually all of the monetary gains since the economy started to expand in the second half of 2009.  Wages are still not sharing in the bounty.

I'll have more at XE.com later, and I'll post a link  UPDATE:  Here's the link.  I discuss this release in the broader context of the economy. It is virtually across the board good news.
Posted by New Deal democrat at 8:08:00 AM

Gasoline "Breaks on through to the Other Side"...

This is from Gas Buddy this morning:

The price of gas has fallen to $2.82 a gallon.  That is lower than at all times in the last 4 years.

Remember that for every $0.10 gas prices decline, after you factor in the typical mileage driven for a vehicle, times the number of drivers in the US, that is something like another $36 billion a year that consumers can save or spend on other goods.

Update:  Here are a few statistics to help understand how much the US consumer is saving on gas.

The average vehicle in the US is driven 11,318 miles/year:

The average gas mileage in the US fleet is about 24 miles per gallon:

There are about 250 million vehicles in the US:
http://www.latimes.com/business/autos/la-fi-hy-ihs-automotive-average-age-car-20140609-story.html

That's about 9 billion gallons of gas per month total in the US.

Gas now is about 35 cents a gallon cheaper than it was last November. That means about $3 billion dollars this month that can be saved or spent elsewhere.
Posted by New Deal democrat at 7:44:00 AM