The consumer portion of the economy continues to benefit from lower gas prices, while the producer side continues to suffer from higher interest rates.

As usual, clicking over and reading will bring you up to the virtual moment on the data, and reward me a little bit for my labor. Speaking of which, enjoy the last days of summer over this Labor Day weekend!

I have written a number of times since February that the short leading indicators have signaled that we should expect weaker monthly employment reports, with both fewer new jobs and a higher unemployment rate. That was completely *not* the case in July, In August, would the decelerating trend kick in again?

That it did. Since February the 3 month average in new jobs has decelerated from over 500,000 to 378,000. And this month the unemployment rate increased to a 6 month high.

Here’s my in depth synopsis.
HEADLINES:
Leading employment indicators of a slowdown or recession
These are leading sectors for the economy overall, and will help us gauge whether the strong rebound from the pandemic will continue.  These were mixed:
Wages of non-managerial workers
Aggregate hours and wages:
Other significant data:
SUMMARY
This report was positive, but much more mixed than last month’s report. The overall employment gain continued strong by historical standards, with gains in manufacturing, construction, and high paying professional and business jobs, as well as temporary positions. The hard-hit leisure and hospitality sector also continued to recover. The labor force participation rate also increased. Although the YoY pace of wages decelerated, it was still strong.
But there were lots of disappointing and outright negative indicators as well. Full time jobs decreased; the household gain was driven by part time employment. Average hours in manufacturing, which lead manufacturing jobs, declined to a 12 year low, and are down -0.5% YoY, a change in line with past steep slowdowns and recessions. Aggregate hours, a more finely grained measure than the number of jobs, were completely flat. Revisions to past months were negative, re-asserting a pattern that has been in place most of this year.
Most of all, both the unemployment and underemployment rates rose. As I have written a number of times in the past several months, I have been expecting this, as it was telegraphed by the rise in initial jobless claims.
My take is that this report is in line with a weakening jobs picture, although the headline number of gains remained historically strong.
Posted by New Deal democrat at 8:15:00 AM

A respite in manufacturing in August, continued decline in construction in July

As usual, the new month’s first data is for manufacturing and construction. Here’s a look at each.

The ISM manufacturing index, and especially its new orders subindex, is an important short leading indicator for the production sector. In August, after two months of showing slight contraction, the leading new orders subindex improved to 51.3, indicating expansion. The overall index also continued to show expansion, with a reading of 52.8 for the second month in a row:

This index has a very long and reliable history. Going back almost 75 years, the new orders index has always fallen below 50 within 6 months before a recession, and in three cases did not actually cross the line until the first month of the recession itself - although the recession did not begin until after the total index fell below 50, and in fact usually below 48.

This print means we are not out of the woods, but on the other hand aren’t in a recession now.

The decline in residential construction spending, while substantial, is less than its 2018-19 decline, and was nowhere near the -40.1% decline it suffered before the end of 2007.

While residential construction spending lags other housing data, such as permits, starts, and sales, it has the virtue of being much less noisy. Over a period of several months, it is almost pure signal. And what this tells us is - unsurprisingly at this point - the housing decline is real, and will likely be reflected as a negative component of Q3 GDP.

Initial jobless claims, which had been in an almost relentless uptrend from the end of March until several weeks ago, declined again this past week.

I mainly put this down to the decline in gas prices since early June relieving the system of some stress. This also puts a recession on hold for the immediate future.

And now, for something completely different .. .. ﻿

Yesterday the Case Shiller and FHFA house price indexes were updated through June (technically, the average of April through June.
Because the Case Shiller index is not seasonally adjusted, the best way to show them is YoY. Here are YoY% changes for the last 2 years of each (although the FHFA *is* seasonally adjusted, and increased only +0.1% for the month to a new record):

Remember, my rule of thumb for non-seasonally adjusted data is that the peak is most likely when the YoY gain declines to only 1/2 of its maximum in the last 12 months. By that standard, although both decelerated to 12 month lows, at +18.0% and 16.2% respectively, this is not much below their recent highs of 20.6% and 19.3% earlier this year.
Also, the FHFA has a tendency to turn slightly ahead of the Case Shiller index, and the FHFA YoY gains appear to have peaked in February, slightly ahead of Case Shiller.
Anyway, these two indexes are telling us - with a delay - that prices did not peak during the spring.
Remember that the median price for new homes appears to have peaked in April (below data *is* seasonally adjusted):

Through July, YoY% increases in OER have continued to accelerate. They may have more to go, or they may be close to their peak YoY. But I do not expect any meaningful downturn in OER, which plus rents contribute a full 1/3rd of the entire value of the CPI, aside from contributions from lower gas prices I see very little relief in the official inflation measure for months to come.
Posted by New Deal democrat at 9:41:00 AM

﻿I have been writing since early this year that, because of the pandemic, there have been several million fewer persons looking for work, leaving a huge number of unfilled job vacancies, particularly in the face of a roughly 10% higher jump in demand. This gives employees the upper hand, as there are almost always higher paying jobs on offer for which they can apply. I‘ve also posited that the dynamic would only slow down once some employers throw in the towel, and the number of job openings signficantly declines.

By now, it is almost certain that openings peaked in March. So the question becomes, how much do they have to decline before the reverse game of employment musical chairs stops?
This morning’s report showed that job openings increased, by 1.8%, for the first time since March, to 11.239 million. They remain down -5% from March, and only 4.2% higher YoY (the lowest YoY reading since February 2021). Here’s the 2 year trend:

With the positive exception of increased job openings, this report showed more deceleration in all the other facets of the job market. I read this as the game of reverse musical chairs slowing down, but that employees still have the upper hand.
Remembering that this report is for July, and August data will start with the jobs report on Friday, although we had a great number last month, I suspect that was something of an outlier, and that we are going to see a significant slowdown in job gains compared with earlier this year, and quite possibly a small increase in the unemployment rate, as well as a slight slowdown in nominal wage gains.
Posted by New Deal democrat at 9:29:00 AM

There’ll be lots of economic news starting tomorrow, but for today let’s pause and take a look at the energy situation.

Here’s a look at oil prices in the past year up through yesterday from CNBC: 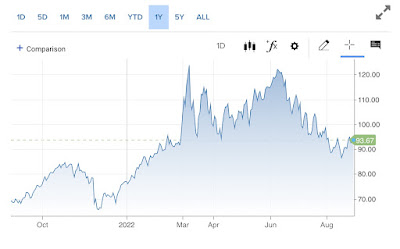 And here’s a look over the same time period from Gas Buddy:

Here’s a close-up of gas prices for the past month:

Gas prices follow oil prices with typically a delay of several weeks. Oil prices peaked in early June, and gas prices at mid-month. Oil prices appear to have started stabilizing at the beginning of August, and gas price declines slowed down a couple of weeks later.
Finally, here’s the comparison of oil prices and gas prices (through last Wednesday, averaged weekly. Since there are 42 gallons in a barrel of oil, I’ve divided oil prices by 42 to show the mark-up at retail:

With oil apparently stabilizing in the $90/barrel range, I expect gas prices to stabilize about where they are now, in the vicinity of $3.70-$3.90/gallon nationwide. This is only a short term forecast as to gas, and a nowcast as to oi.; I am not forecasting where oil prices will go from here.
But this is still very good news for consumers compared with the last 6 months.
Posted by New Deal democrat at 9:24:00 AM