The indicators in the short leading and coincident timeframes have improved. In other words, if it were left to its own devices, the economy “wants” to get better.

But we are still at the mercy of the pandemic, and the federal and State responses to it. And on that score, I don’t see any meaningful progress that is going to be made in the next 5 months.
Posted by New Deal democrat at 8:00:00 AM

I am still highlighting these because of their leading nature for the economy overall.  These were very positive:

A special note: as expected, there were outsized seasonally adjusted gains in education of 245,000, as layoffs that normally happened in July didn’t, because they happened in earlier months. There were also 27,000 census hires.

Based on some weekly data, it had been feared that there might be a significant decline in jobs this month. Instead, there was another - if smaller - rebound. Even excluding the 301,000 gain in all government jobs, the gain was 1.462 million jobs. Needless to say, this was very positive.

Gains in construction and manufacturing hours were particularly impressive, as were professional and business services. Even with those gains, however, aggregate hours and payrolls are now down from peak about what they were, percentage-wise, at the worst of the Great Recession.

The distortion in average hourly earnings continues to show that the lower class of workers is still suffering the brunt of the economic consequences of the pandemic, and desperately need continued aid.

While this report was certainly very good in *relative* terms, in absolute terms the  economic devastation has continued. The increase this month was only 10% of the total percentage loss from peak of total employment. In other words, the “V” shaped jobs recovery some were hoping for has stopped materializing. Because initial jobless claims stalled out in 4 of the past 5 weeks, and nonfarm employment tends to lag this trend by a month or two, the outlook for continued job gains next month is very problematic.

Initial and continuing jobless claims: back to being “less awful”

Continuing claims (red, right scale), reported for the prior week, also made a new pandemic low of 16,107,000.

All of these remain at far worse levels than even at their worst during the Great Recession. Further, that there are still 1 million *new* layoffs a week almost 5 months into the pandemic indicates that longer term damage is being done to the economy, I.e., if there were a vaccine tomorrow, there would be no “V-shaped” immediate recovery back to pre-pandemic levels. Almost all of which has been totally unnecessary, and has been caused by incompetent leadership at the very top.

But after about a month of stalling, on a very very very relative basis, I will take this “good” news.
Posted by New Deal democrat at 9:01:00 AM 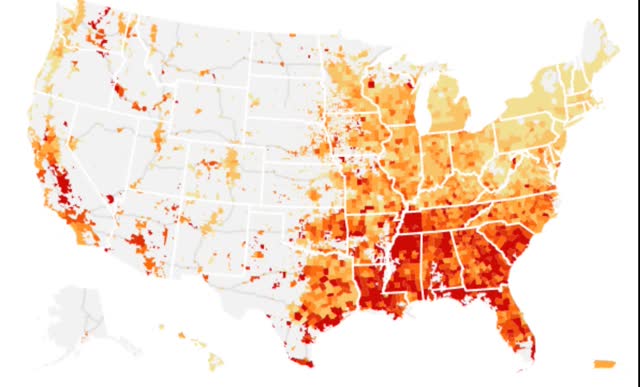 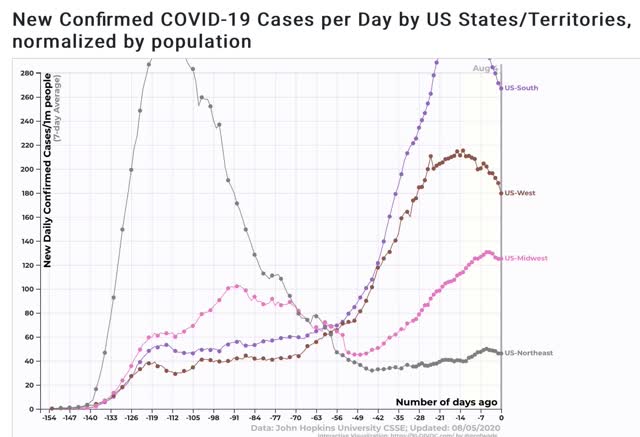 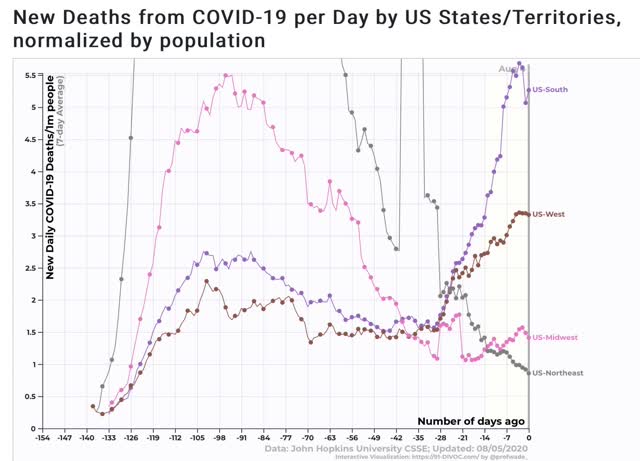 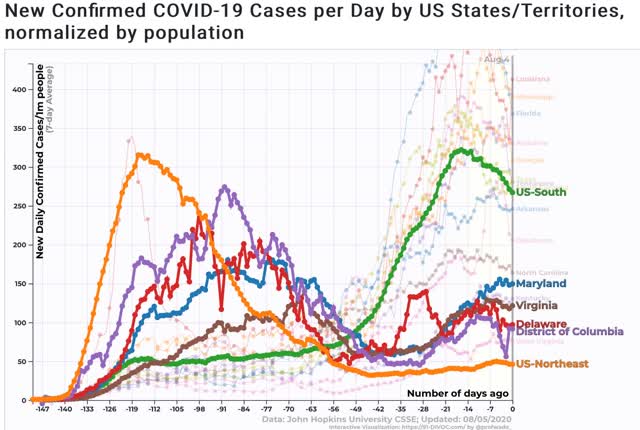 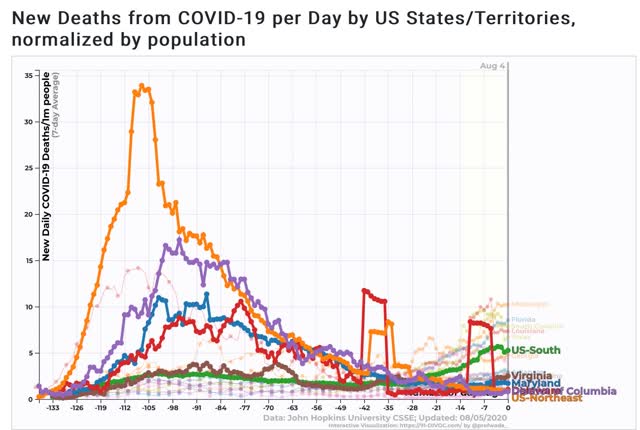 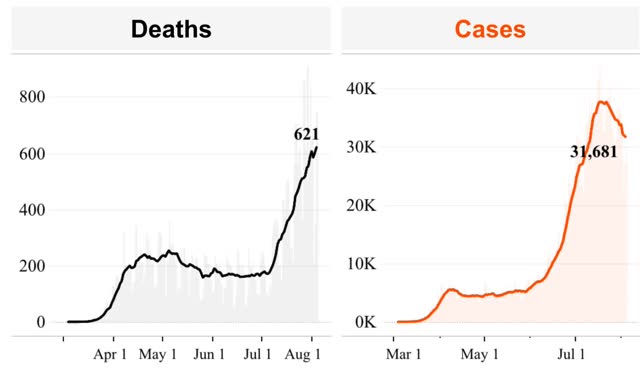 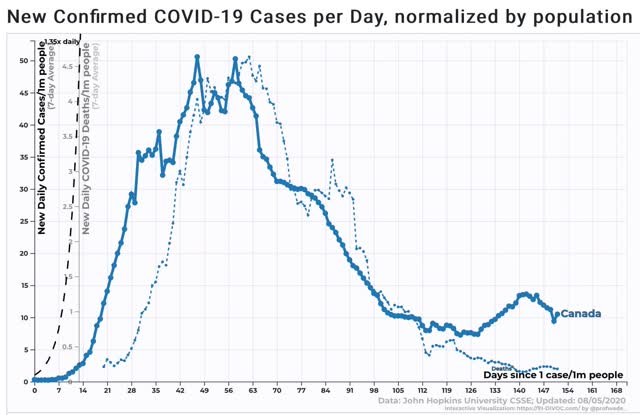 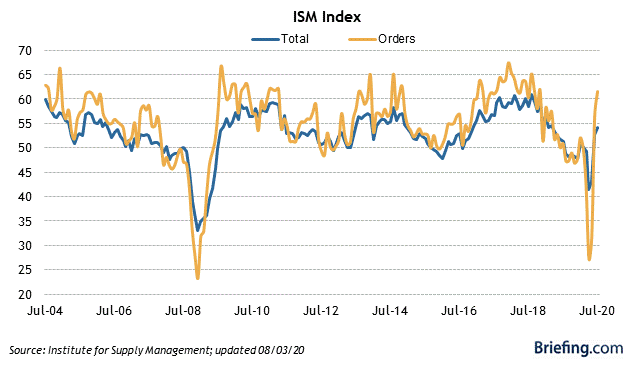 The 2020 Presidential and Senate elections nowcast: reverting towards the mean

The theme this week is that Trump’s approval is reverting to the mean, and so are the Presidential polls. 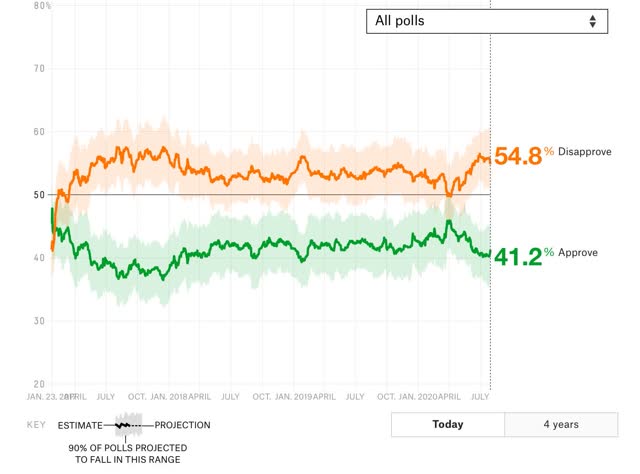 For most of the past month, Trump approval has been languishing at 40%, equivalent to the worst levels of his Presidency. But as always been the case before, his partisans come back to approving him after the immediate moment has passed.

This is reflected in the Presidential polling. To refresh, here is how the below map  works:

Here is the updated map through August 1: 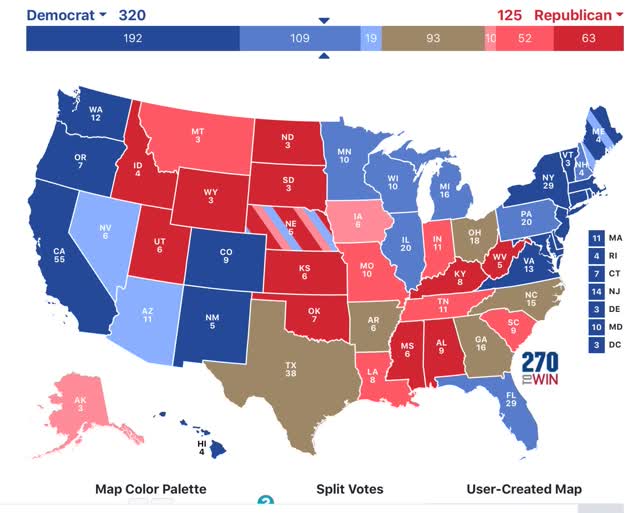 While there have been no outright flips, note that North Carolina has gone back to being a toss-up. Nevada plus several States in the midwest are less strongly pro-Biden. Meanwhile South Carolina and several other States in the Deep South have turned more pro-Trump.

Even so, as has been the case for nearly a month, if Biden simply wins the States in which he leads by 5% or more in the polling, he would win the Electoral College, without even winning a single “toss-up” or “lean Biden” State as shown on the map.

Here is what the 2020 Senate map looks like based on the same metrics, with the following changes:
- where there is no polling in the past month, I have used the most recent poll
- where there has been no polling at all this year, I am using the Presidential polling as the best guess. 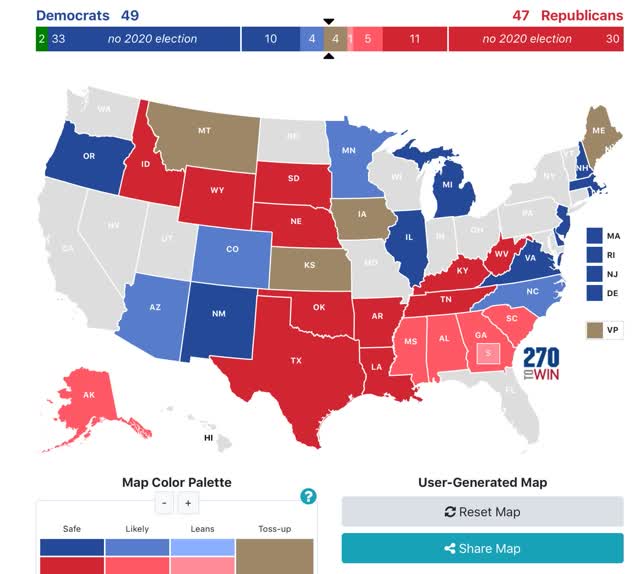 Note that there has been no polling at all this year in the following States: Oregon, Idaho, Wyoming, South Dakota, Nebraska, Louisiana, Arkansas, Rhode Island, and West Virginia.

Most importantly, note that Maine has tightened back to a toss-up. This is likely to be the race that determines whether or not the Democrats achieve a majority in the Senate.

I am quite concerned about what reversion to the mean will do in Senate races. In the Presidential race, I continue to believe that Trump has until Labor Day - about 5 weeks - to pull off a miracle as to the pandemic. More likely we will start to see outbreaks in schools among teachers and students, and then their parents, by about September 20. Hospitalizations based on those outbreaks will start to increase in early October, and deaths in late October, just in time to be the last big story before Election Day.