Weekly Indicators for February 24 - 28 at XE.com

My Weekly Indicator column is up at XE.com.

Something more than the unusually cold winter weather may be behind the weakness in the data that we've seen since the first of the year, but I want to give the matter some more thought.
Posted by New Deal democrat at 9:30:00 AM

This morning the final monthly report on housing, pending home sales, was reported by the NAR.  The index was up 0.1% m/m from December, but down -9.4 YoY:

(graph from Wall Street Journal
So, with January 2014 in the books, how do we stand?  Below are two graphs.

Both of these graphs show the clear deceleration in the housing market over the course of 2013, to the point where 3 of the 5 monthly reports have turned negative YoY.  The strongest metric is new home sales, which while only up 2% YoY, in January rose to the highest level in over 5 years.

Bill's forecast of 20% annual growth will take a real reversal of momentum, although there are some individual months where there are some easy YoY comparisons.  Obviously I am expecting some further deterioration, concentrated between now and mid-year. 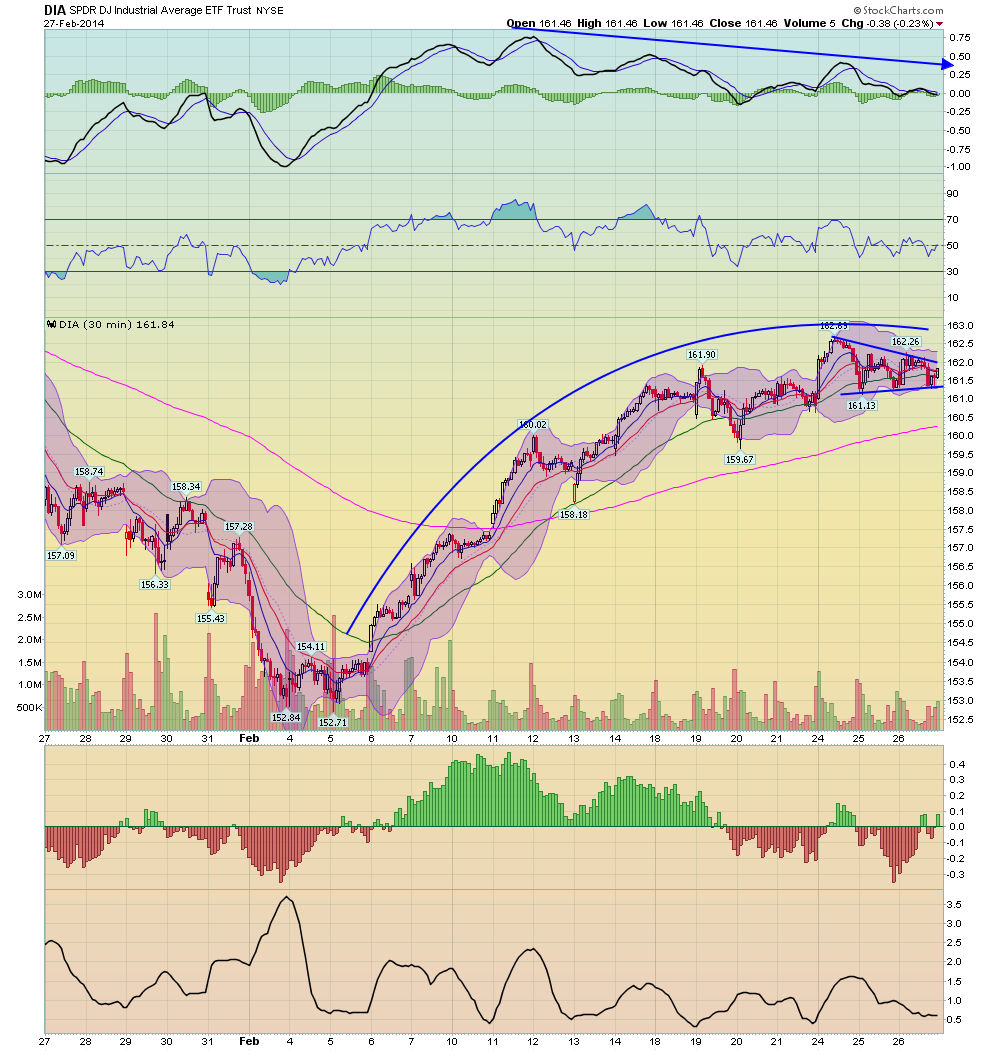 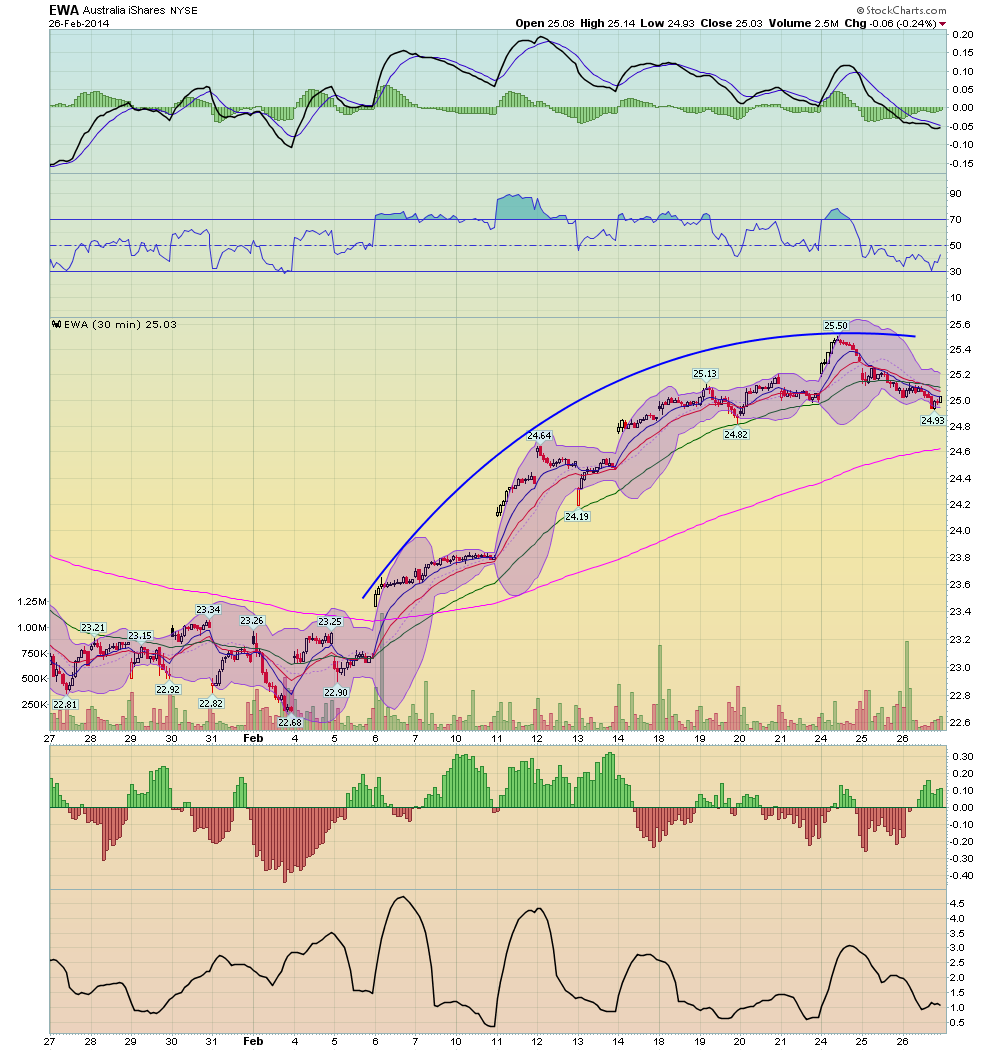 Above are the 30-minute charts for the Dow Jones, Australian and European ETFs.  All three have several common technical features.  We see a rally from the sell-off in early February, followed by a leveling off of prices over the last few trading sessions.  Also notice all three have a declining momentum picture as evidenced by the lower moves of each respective MACD.
﻿
Posted by Unknown at 7:13:00 AM 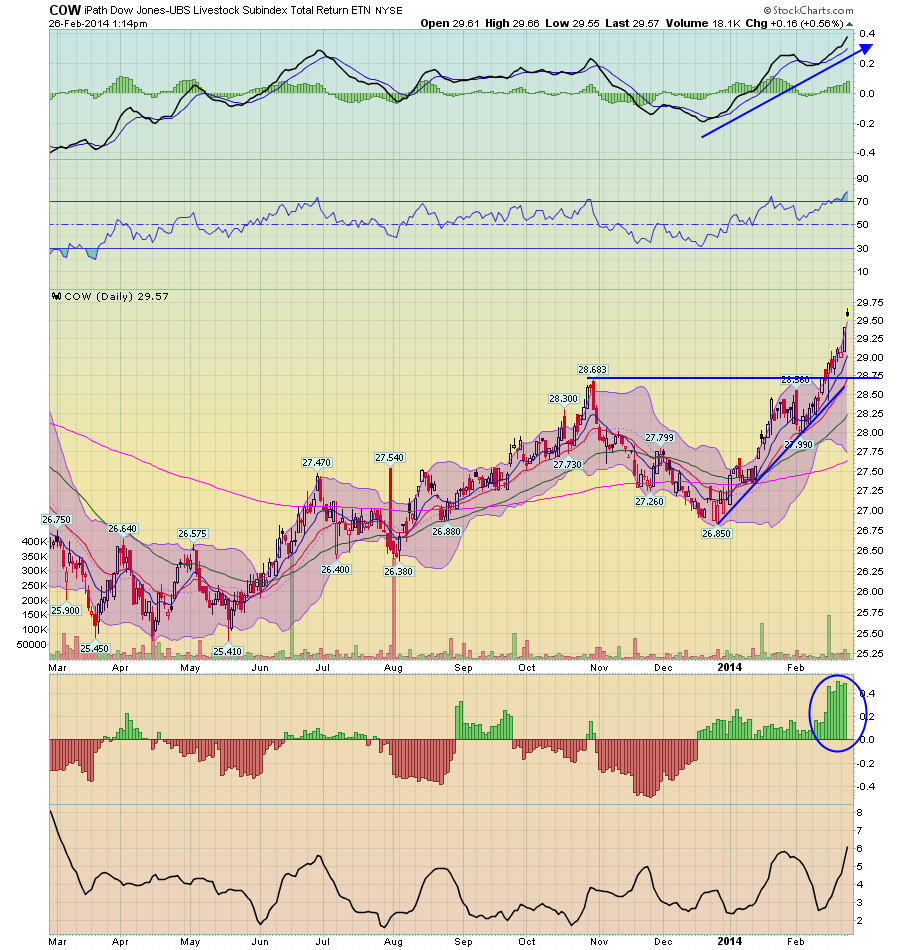 Above is the daily chart of the cattle ETF.  Since the beginning of February it has rallied a little over 10%, rising from 26.7 to ~29.7.  In the last few trading sessions we've also seen a big spike in the CMF, indicating a strong net inflow into the ETF.

The big reason for the rally is the drought conditions in Australia and Brazil, as highlighted in this piece from the Financial Times.
Posted by Unknown at 12:18:00 PM

Housing bulls finally got a piece of good news this morning in the January new home sales report.

But the YoY% change is still close to the lowest in 2 years.  I'll have more later at XE.com and I'll update this post with a link.

UPDATE:  Here's the link to my extended discussion at XE.com.
Posted by New Deal democrat at 9:30:00 AM

USD/JPY Consolidating In a Triangle Pattern

How concerned should we be about the recent downturn in sales? 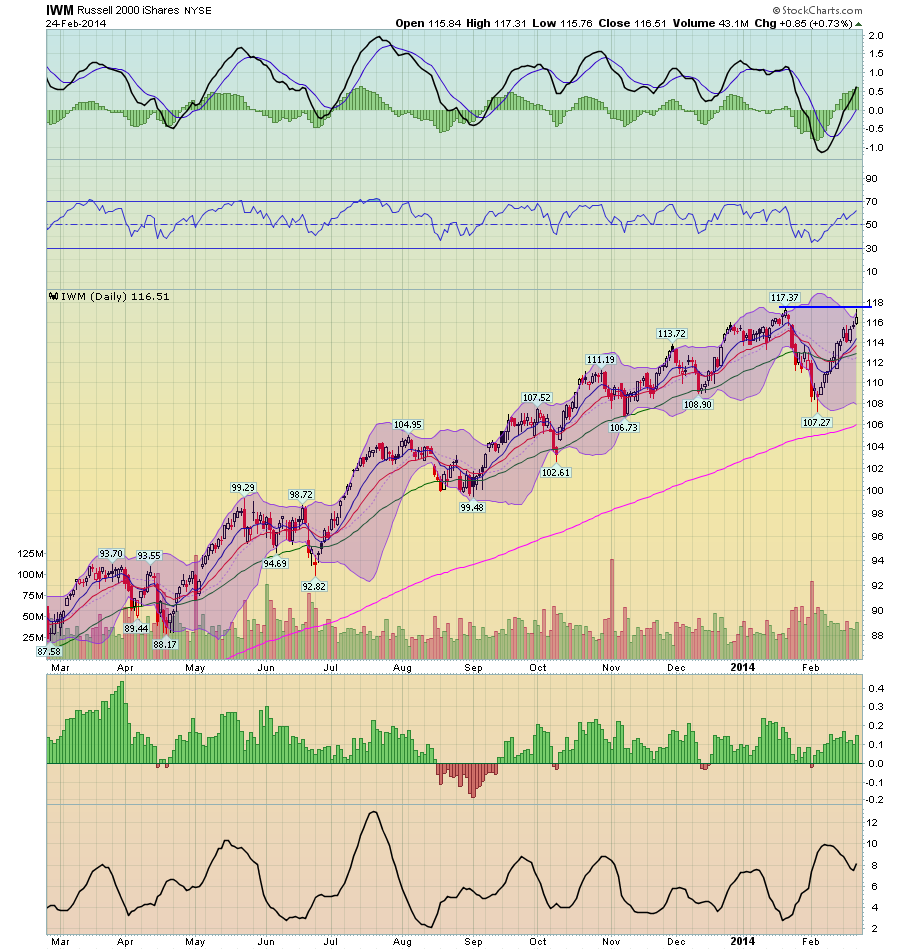 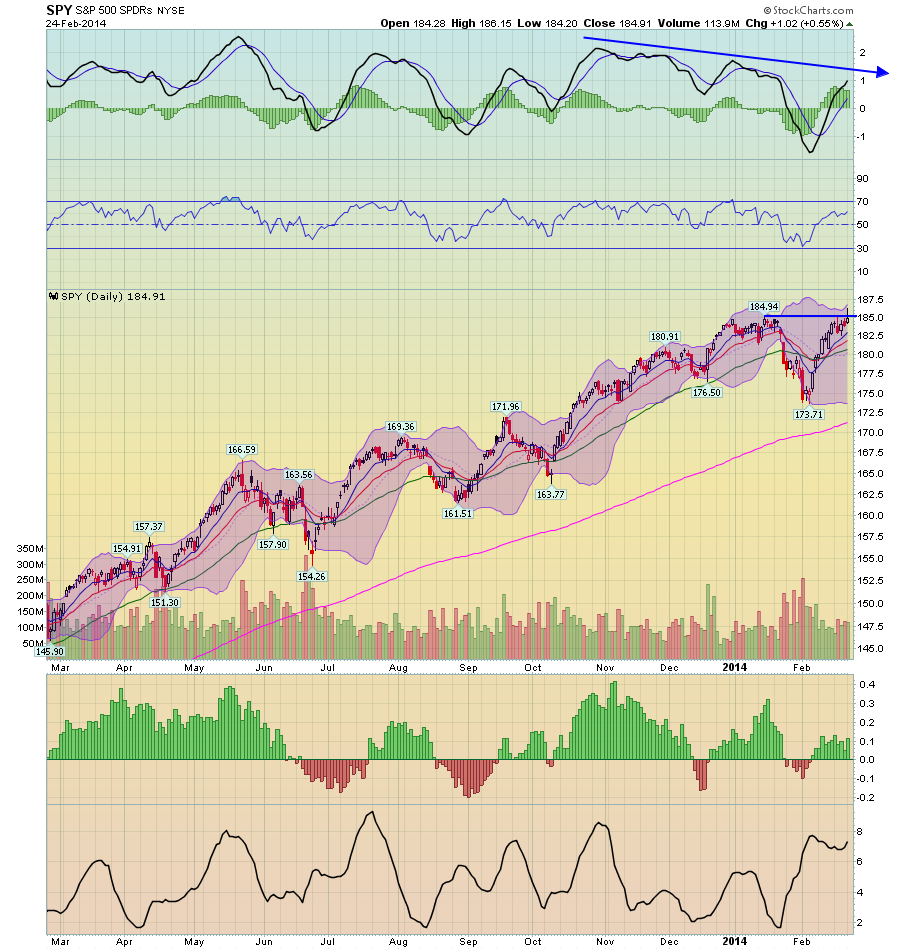 ECRI now claims we're in the longest recession since 1929-32

I haven't addressed the badly blown recession call by the formerly highly-regarded ECRI since its 2 year anniversary last September.  I'm updating my commentary now because, as of February, ECRI's fictitious recession, which they claim started in July 2012, is 1 year and 8 months old.  That makes it longer than 1973-74, longer than 1981-98, even longer than December 2007 - June 2009.  In fact if their claim is to be believed, this is the longest recession since the "great contraction" of 1929-32.
Forget government statistics, which ECRI notes can be revised significantly.  Private statistics which don't get revised like railroad traffic, truck tonnage, steel production, the ISM manufacturing and services indexes, temporary hiring and consumer purchasing as measured by the ICSC, Johnson Redbook, and Gallup, have all nearly relentlessly risen throughout this period.
ECRI's original mistake was a very human one:  the interpretation of a downturn in their indexes.  You may recall that they originally said that a recession was "unavoidable" even by concerted government action, and was imminent if it had not already begun, back in September 2011, just after the debt ceiling debacle.  During that time almost all economic statistics dropped like a rock, as consumers and businesses froze while they waited to see whether the US government would actually default on its debts, and if not, what altered landscape any proposed "grand bargain" might bring about.
As a result, the ECRI Weekly Leading Index and Weekly Coincident Index, which had each been as high as about +7 early in 2011, and had already dipped to 0 in the WLI and about +4 in the WCI at the time the debt ceiling debacle began,  dropped to about -7 and +3 by the time of their September recession call.  He's a graph of both of the them for the year 2011: 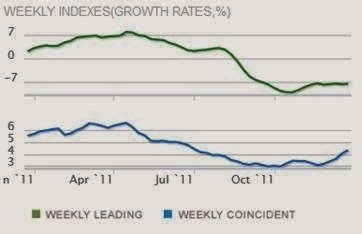 ECRI simply misinterpreted the fallout from a transitory political crisis as an organic economic development.
By stubbornly refusing to admit error, they have undercut if not outright contradicted  their own earlier thesis that the US economy was entering what they called "The Yo Yo Years." Their thesis was that GDP was not capable of meandering about 2% for very long.  It would either spike into expansion or downward into recession.  These Yo Yo expansions and recessions would happen with increasing frequency.  Instead GDP has generally meandered at around 2% +/-1.5% for 3 years now.
And instead of more frequent, if brief, expansions and recessions, they are stuck trying to defend a recession call going on 3 years old, with a seies of ad hoc references to the declining data du jour.
Their most recent missive, in fact, appears to be a flat-out contradiction to a position they took only 2 years ago.
Earlier this month, in an article entitled "Failure to Launch," ECRI touted their Weekly Coincident Index again, showing that the change in their coincident index had dropped precipitously from the end of November until the end of January:

That's pretty straightforward.  Everybody who follows economic data knows that such a deterioration has taken place.
The part that appears disingenuous, however, is the preceding part of the index, which shows the growth rate climbing throughout the rest of the year, and spending the 8 months between April and November almost entirely above 4%.
Now take a look at this graph of ECRI's coincident index that was supplied to Mike Shedlock a/k/a Mish in March 2012 (annotations are Mish's): 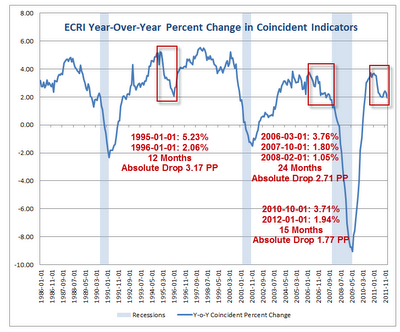 Here's the very specific claim that ECRI made at the time:

The latest USCI growth rate is 1.94% (which can be rounded off to 1.9%). In January 1996, it had dropped only to 2.06% (which can be rounded off to 2.1%). This was certainly not below current readings. Of course, no recession followed.
In 1998, the USCI growth came nowhere near current readings, so the question doesn’t arise. It wasn’t until January 2001 that it fell below 2%, and the recession began two months later.
.... If you look at all the occasions in the last 50-plus years when USCI growth fell to 2.0% or below ..., it is clear that recessions began around those dates....
In sum, it is precisely accurate to claim that y-o-y USCI growth has never dropped to current readings in the past 50-plus years without a recession ensuing.

And what the 2013 Weekly Coincident Index supplied by ECRI itself shows is that, to the contrary, all the time for the last year that ECRI has been claiming we are in recession, the Weekly Coincident Index was also well above that allegedly crucial "2" level.
In other words, ECRI's position now appears to be in blatant contradiction to the position they took in March 2012.  The Coincident Index did not continue to fall, but instead at virtually all times thereafter has been higher -- just like after January 1996.
One final thing.  It's pretty clear that one of the components of the Coincident Index is personal income. That's what explains the upward spike in December 2012, and the downward equivalent spike in January 2013.  At the time of ECRI's "Failure to Launch" commentary, the YoY comparison was with the December 2102 upward spike.  On March 3, January personal income will be reported, and the YoY comparison will now be with January 2013's downward spike.  I confidently predict that ECRI will not publicly update its Weekly Coincident Index once that data is reported.
In summary, ECRI appears to have descended to the level of Zero Hedge in trying to salvage their reputation.  Sad.
Posted by New Deal democrat at 10:30:00 AM 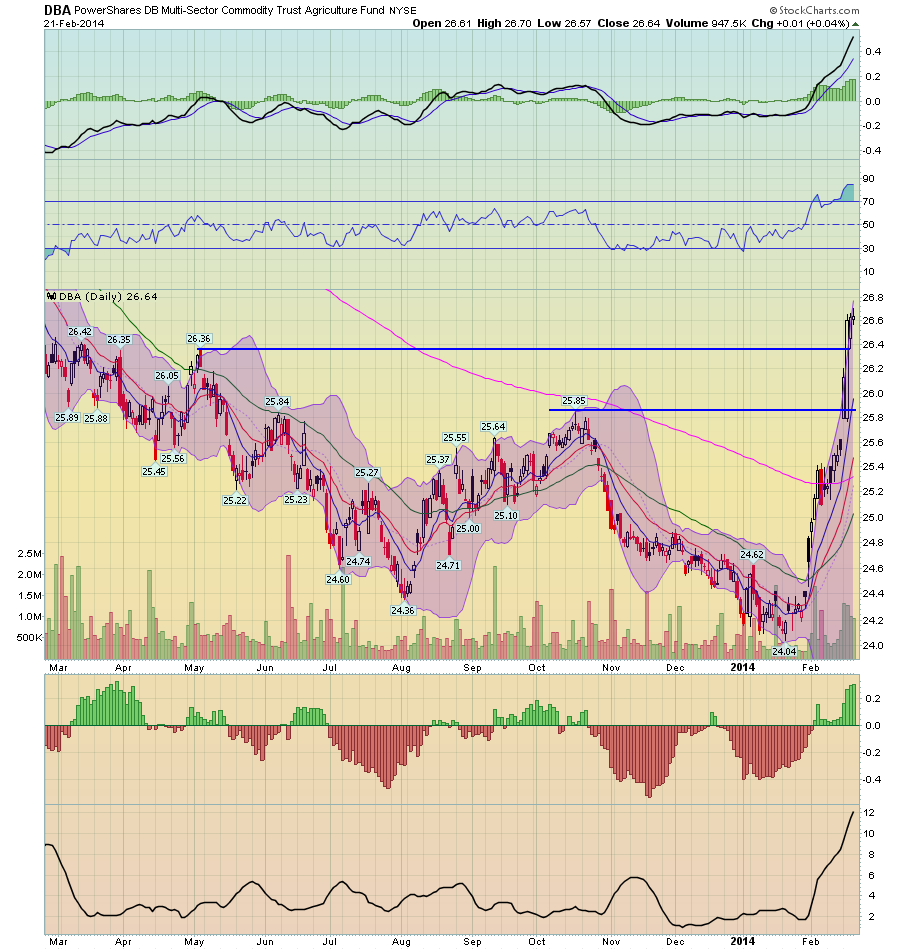 Above is a chart of the DBA -- the agricultural ETF.  Since late January, it has risen from a low of 24.4 to ~26.6 -- an increase of about 9%.  The primary reason is the driest growing season in Brazil in the last 60 years, which has effect both softs (coffee) and grains (soy beans). 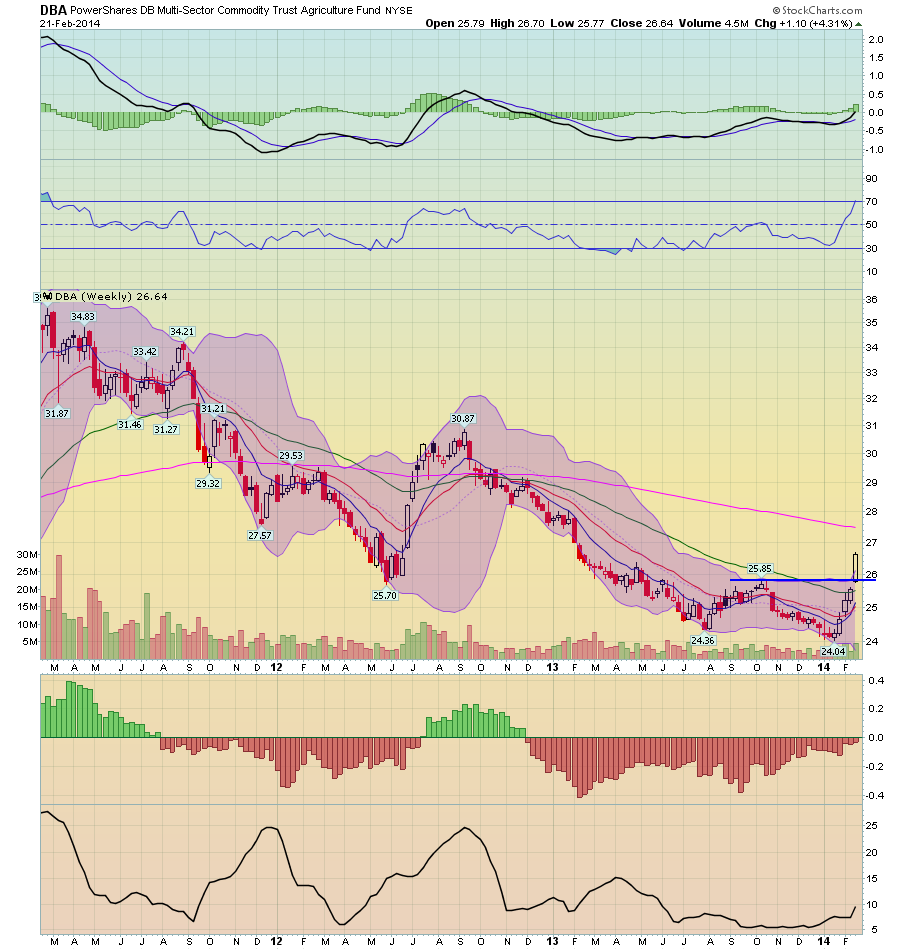 The weekly chart places the move in a more historical context.  Prices have been bottoming for most of 2013, Falling from a price spike in 2010-2011.  Over the last few weeks, the weekly chart has printed some very strong price bars, moving prices through the 10, 20 and 50 day EMA.  Also notice that the MACD and CMF are in a position to become far more bullish in their overall measurements.
Posted by Unknown at 7:17:00 AM