Weekly Indicators for January 9 - 13 at XE.com

How close are we to "full employment"?

Paul Krugman ignited a small kerfluffle this week when he suggested that we are close enough to full employment that any fiscal stimulus would lead to "crowding out."  Jared Bernstein disagreed.

I think Bernstein is correct.  We aren't yet at full employment.

An even better way, I think, is to look at two perennially lackluster employment series:  "Not in the Labor Force, but Want a Job Now" and "Part Time for Economic Reasons."

In the below graphs I show how they compare with the official unemployment rate during this expansion vs. the prior two expansions (the "part time" series only goes back to 1994).

Here is Not in Labor Force, but Want a Job Now:

In other words, to get to the best years of even the weaker 2000s expansion, we would need 1 million people who want a job to enter the workforce, plus another 1.5 million part-timers to find full time employment.

As of last month, the civilian labor force was 159,640,000 people.  Thus we need a little over 1.5% improvement in the employment situation (2.5 million of 160 million) to get to what constituted full employment in the last two expansions.

Corporate profits, as a long leading indicator, tend to lead stock prices, which are a short leading indicator. I've updated this analysis through year-end 2016,  This post is up at XE.com.

As an aside, I will post my forecast for the second half of 2017 once Q4 GDP, which will include the long leading indicators of private residential investment and proprietors' income, is reported in two weeks.
Posted by New Deal democrat at 8:30:00 AM

In case you hadn't already noticed, that big decline in gas prices you saw at the pump has come to an end.  At the moment gas prices are up about 20% YoY.  Thus gas prices are one of my five graphs to watch in 2017.

Which means, this is a good time to revive a back-of-the-envelope calculation I used to do when gas prices of $4 would act as a choke collar on economic growth.

From February through November, consumer prices rose +1.9%. An additional +0.2% will make that +2.1% for 10 months -- above the Fed's 2% target.  So unless we have a big miss in the next employment report, I expect the Fed to chase this inflation with a rate hike.
Posted by New Deal democrat at 8:53:00 AM

My forecast for the first half of 2017

My forecast for the economy through the middle of the year is Up at XE.com.
Posted by New Deal democrat at 10:30:00 AM

China has a GDP of a little over 11 Trillion dollars while Taiwan's is 523 billion.  China is over 20 times as large as Taiwan.  It simply isn't large enough to leverage against China.

We see the same thing when we look at the most recent trade information from the Census Bureau: 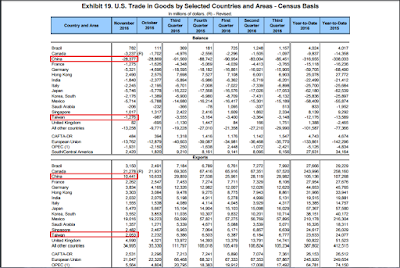 Trying to use Taiwan against China is a fool's errand from the start.
Posted by Unknown at 5:45:00 AM

With just over a year remaining on Janet Yellen's current term as chair of the Federal Reserve, comments from three of her potential successors at this this weekend's annual American Economic Association meeting are noteworthy. Glenn Hubbard of Columbia University, along with Stanford University’s John Taylor and Kevin Warsh, are all seen by Fed watchers as potential future chairs should President-elect Donald Trump decide not to re-nominate Yellen. All three criticized the U.S. central bank for trying to do too much, and suggested interest rates would be higher if they were in charge.

There are two reasons Taylor should not lead the Fed:

1.) He is the leading proponent of having the Fed use mechanical rules to determine policy.  Taylor authored the "Taylor Rule," an equation that he believes should completely govern the Fed's interest rate policy. The rule is very useful as a basis for policy discussion.  Despite that benefit, Taylor's argument assumes his equation is infallible -- that it will always be correct in any circumstance.  That assumption is incorrect; nothing, especially in economics, is that simple.  There is always "another hand" that should offer policy guidance.  And binding the Fed's hands would have prevented them from engaging in the extraordinary measures during and after the Great Recession.

2.) Taylor continually compared the Obama recovery to the Reagan recovery, an economic apples to oranges comparison.  The Federal Reserve caused the recession preceding Reagan: They increased interest rates to wring inflation out of the economy -- a policy that worked brilliantly.  Once rates started to move lower, the economy faced little to no structural headwind to naturally slow economic growth.  Perhaps just as important, Reagan's tenure began just as the baby-boomers were beginning their peak earnings time in life.  This started a long period when the labor force participation rate increased, adding additional stimulus to the economy.

Obama's recovery was preceded by an entirely different precursor: a debt-deflation recession and recovery.  This is an entirely different economic scenario then that faced by Reagan and one that leads to a far slower recovery.  In a post-debt deflation economy, consumers are burdened by debt values that, ins some cases, are higher than asset values, leading to slower spending as consumers allocate additional resources to paying down debt rather than other goods.  The de-leveraging process can take years, acting as a slight to large drag on economic growth.  And unlike Reagan, Obama faced a declining LFPR as the baby boomers started to retire, which also lowered GDP growth.

Taylor has yet to acknowledge either fact in his analysis.  There are two possible reasons for his oversight.  1.) He is unaware of the difference between the recoveries.  Given Taylor's stature, this is highly doubtful.  But it this is the reason is is automatically disqualifying because it belies a profound ignorance of economic history.  2.) He is aware of the differences, but for political reasons refused to acknowledge them.  This is the more likely reason.  Taylor is a University of Chicago economist; he is inherently biased against government action and activist policy.  However, if this is the reason, it is also disqualifying because it indicates he is more interested in political outcomes than positive economic outcomes.


In the last week I have described 5 relationships that bear particular watching in 2017.

#5 is the price of gas.
#4 is the value of the US$
#3 is mortgage rates and residential construction
#2 is inflation and the Fed funds rate.

The overall theme is that 2017 is likely to be a rather typical year of late cycle inflation, possibly also featuring a trade war.

The number one graph I am looking at this year is how consumers are affected by, and deal with, this late cycle inflationary environment.

In the absence of special factors, like spouses entering the workforce in the 1980s, or the housing bubble of the early 2000s, when real wages stagnate, so does real consumer spending (as expressed by real retail sales per capita) with a bit of a lag (red).

Here are the same two graphs expressed as a YoY%:

When not just one but both stagnate, that is a signal for an oncoming consumer recession.


During this entire expansion, nominal wages for nonsupervisory employees have not grown faster than 2.6% YoY. Since we are still adding jobs faster than the labor force is growing, there ought to be at least a little further improvement than that.  But in the last 9 months alone consumer prices have increased by 1.9%, causing real wages to stagnate (blue in the graph below).

For 2017 I don't see any special factor at play, unless there is a tax cut that applies to middle and working class earners enough to boost spending.

So the #1 graph for 2017 is real wages and real conusmer spending:

Here is the same graph YoY:

I will be following this to see whether real wages stagnate or decline, and if so, does real spending follow suit, laying the groundwork for the next recession.
Posted by New Deal democrat at 8:30:00 AM

US Equity and Economic Week in Review
Posted by Unknown at 2:51:00 PM