This week particularly highlighted the bifurcation between those parts of the US economy most exposed to the global slowdown, and those most focused on domestic consumption.
Posted by New Deal democrat at 8:17:00 AM

The more leading numbers in the report tell us about where the economy is likely to be a few months from now. These were very positive.

Only two things held this report back from being Totally Awesome! The first is the headline 140,000 private jobs created, but as most readers probably already know, August numbers have had a history of major upward revisions.  The second - sigh - once again is wage growth, which despite a 5.1% U3 unemployment rate is unable to crack 2%.  This is terrible and continues to bode ill for the next recession whenver it may come.  I still expect this situation to improve once the broader U6 unemployment rate, which fell again this month, finally falls below 10%.

Everything else was damn near, well, awesome. Not only did both unemployment rates fall to new lows, so did short term unemployment (a leading indicator), and those not in the labor force but want a job now fell to a new post-recession low save for one month.  Involuntary part time workers did go up, but still are at the second-lowest number since the recession. The manufacturing workweek improved Manufacturing and mining employment did fall, but were more than offset by gains elsewhere. Both aggregate hours and payrools also made a new post-recession high.

US consumers power past poor manufacturing

I have a new post up at XE.com, contrasting the slowdown in US manufacturing vs. the strength of the US consumer economy.
Posted by New Deal democrat at 10:13:00 AM

A real puzzle about real wages


This morning the National Employment Law Project (NELP) released its annual update on real wages during the recovery.  Their findings are a puzzle to say the least.
Virtually every other measure of real wages shows a bottom in late 2012. (Real wages declined from 2009-12 as the price of gas went from $14.0 to $3.90, hence inflation outstripped miserly nominal wage growth): 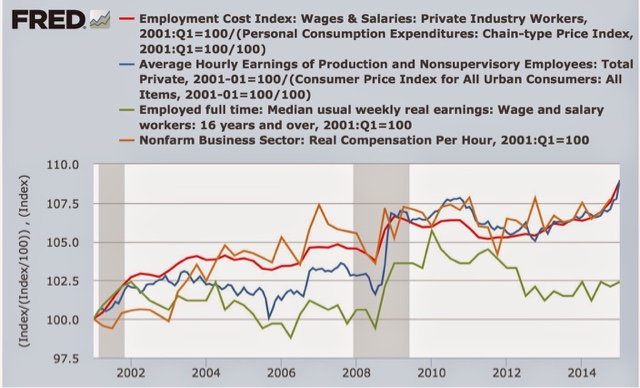 In contrast, here is the NELP graph of real occupation wage changes from 2009-2014: 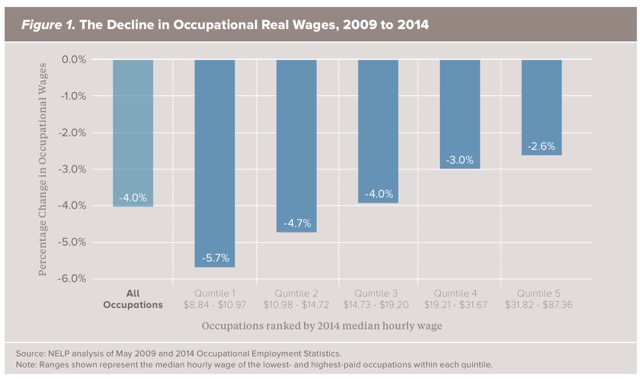 Note that the OES is calculated through May of each year, so the latest report misses the effect of the big decline in gas prices in the last 12 months.
It is virtually gospel that as the labor market improves, so should wage growth. In other words, wages could be down from 2009, but up from 2012 or 2013. So I went back and compare the NELP's latest report with earlier reports.  Here is what I found:
From 2009 through 2013: 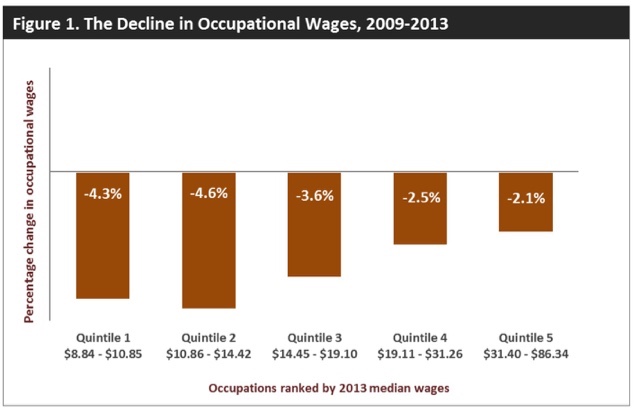 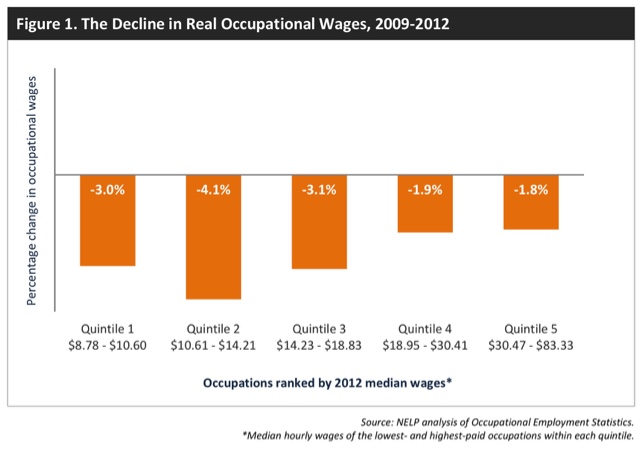 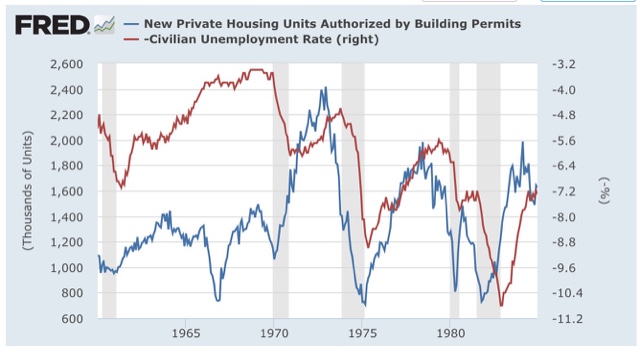 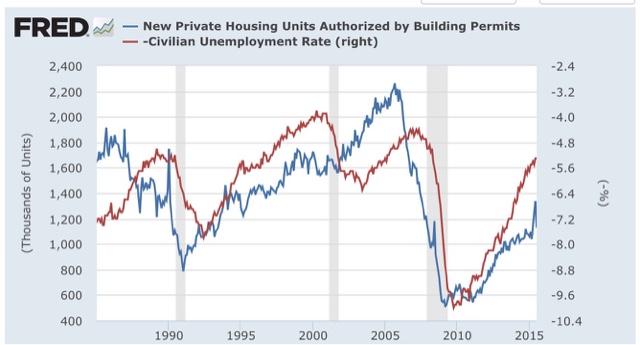 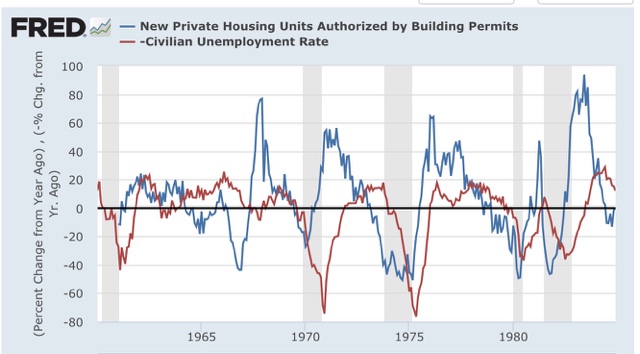 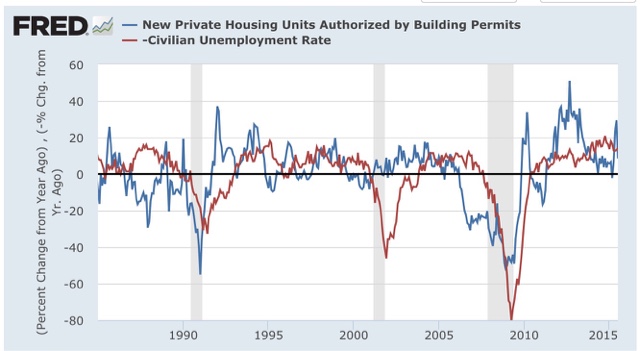 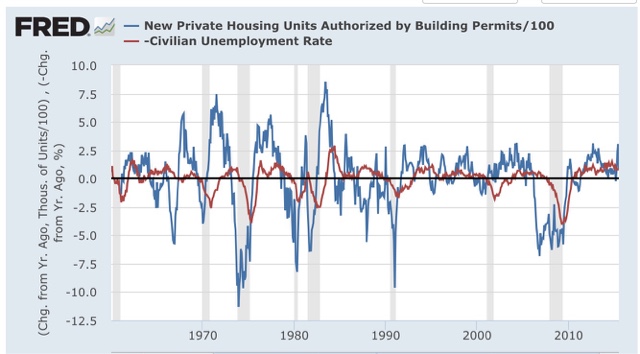 Here is a close-up of the last 5 years: 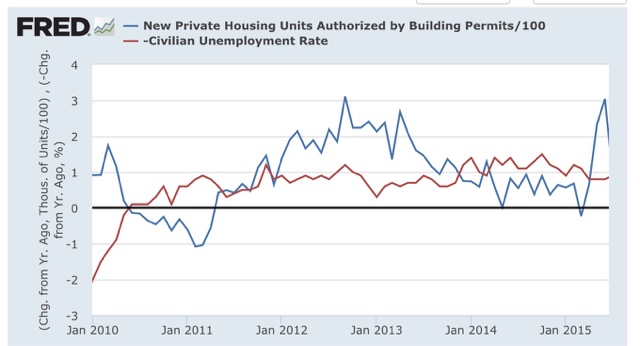 While the same general leadling/lagging relationship is apparent, this measure highlights how unusual 2014 was.  Permits increased YoY generally all year, but only slightly, i.e., by less than 100,000.  In the last 50 years there have been only 2 similar periods, 1962, 1968 (somewhat), and 1986 (shown in the graphs below). 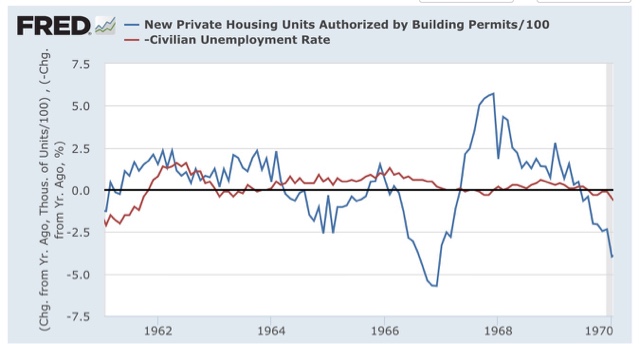 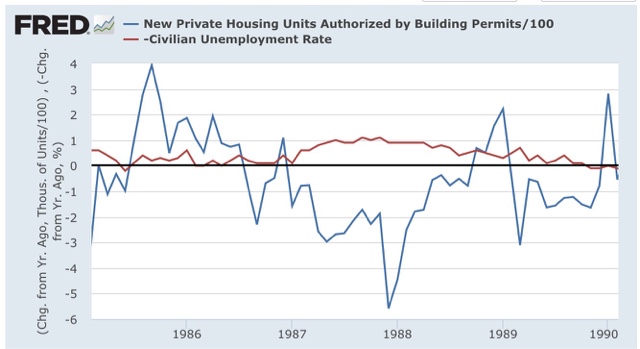 So why is it that most economic writers appear to think the defining element of a labor market recovery after a recession is the number of jobs created? Isn't the better measure the amount of cold, hard cash it is delivering to workers?  That, dear reader, is measured by real aggregate wages, and that, I believe, is the best measure of labor market recoveries.

So let's compare the increase in real aggregate wages -- the total wages paid to all nonsupervisory workers, adjusted for inflation, from their bottom in each recession.  Since that was 5 years and 9 months ago for our current recovery, that will be our measuring stick.  This is calculated as follows: average hourly earnings for nonsupervisory workers, times average hours worked, times the number of jobs, and then divided by the consumer price index, with the result indexed to 100 at the bottom.  Here are the results:

The interactive FRED graph of real aggregate wages can be found here.

An interesting aside is that the "Reagan recovery" of the 1980s is either great or mediocre depending on where you measure.  In the first 14 months, real aggregate wages grew 7.9%, or a blistering .56%  a month! In the last 69  months, however,  they grew only 9.3%, or a miserable .13% a month.  Had I measured back from the end rather than forward from the beginning, the current labor market recovery would be stronger.

But because it is longer lasting, however,  after 69 months the current labor market recovery  has a better record than the short-lived recoveries of the 1970s and the brief 1981 recovery as well.   By this  measure it only  lags the 1990s recovery as well as the 1960s, and, depending on whether you measure forward from the beginning  or back from the end of the 1980s recovery, the current recovery is slightly worse, or significantly better than that labor market recovery.  Should the current recovery last another 24 months, it will probably surpass the Reagan recovery by either measure.

The bottom line is that the record  of this labor market recovery is mixed: poor monthly growth due to nonexistent labor bargaining power; but good total growth based on its persistence.
Posted by New Deal democrat at 7:30:00 AM