Here is my basic thesis of the market, which I expressed last Monday:


Essentially, the markets have moved through key resistance areas.  But in doing so, they have advanced very strongly and are now in a slightly overbought position.  My thoughts are a correction of 5%-10% is more and more likely, although this correction will hardly be fatal unless the fundamental backdrop significantly changes.

And as I noted on Friday, the IWMs were a market to watch as they were right at support.  On Friday, they broke that support: 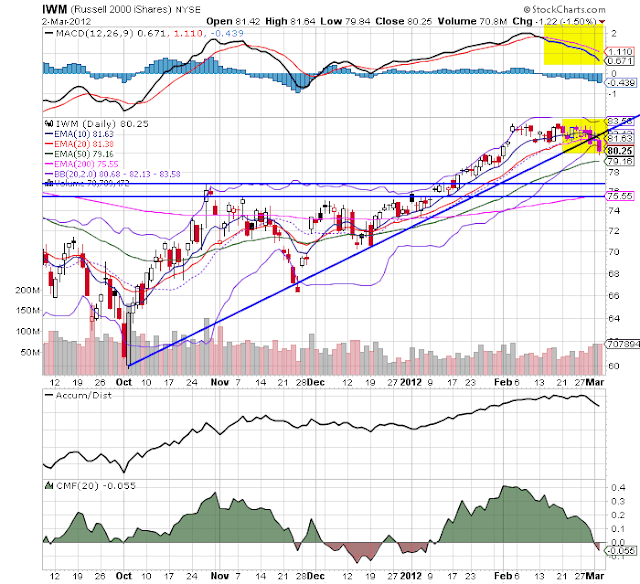 Also note the pick-up in volume over the last three days as prices approached support and then broke it.  On this chart, we see support at the 79 level and again at the 77 level. 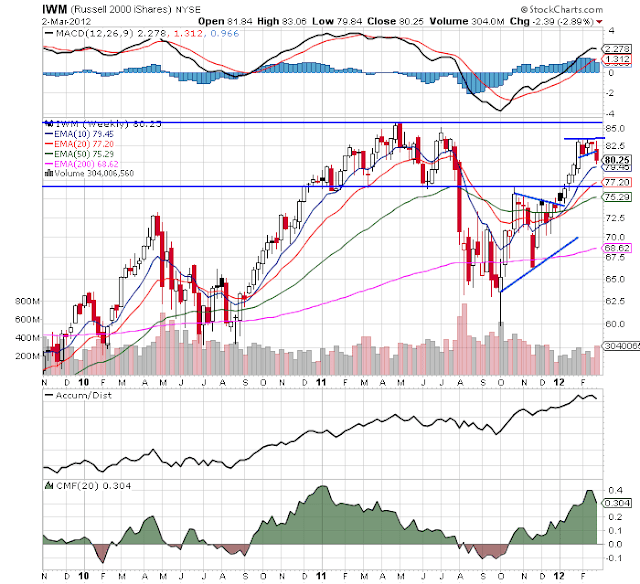 The weekly chart shows the price action with some appropriate distance.  IWM prices rallied strongly from a triangle consolidation at the end of last year and, for the last three weeks, have been consolidating.  Last week we see prices drop through support. 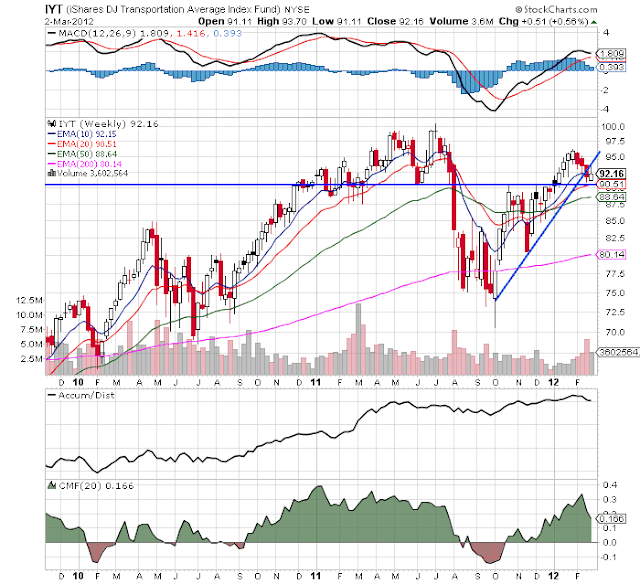 The lack of confirmation by the transports has been a big concern of mine, and was one of the reasons why I began to think the market was moving towards a correction.  The above weekly chart places those thoughts in more detail.  Prices have broken an uptrend and are now moving toward support.  However, this is hardly a fatal sell-off; it's more of a "traders taking profit" situation. 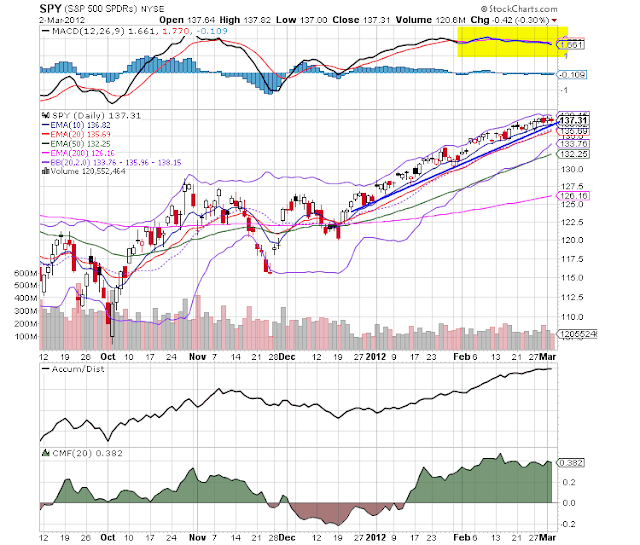 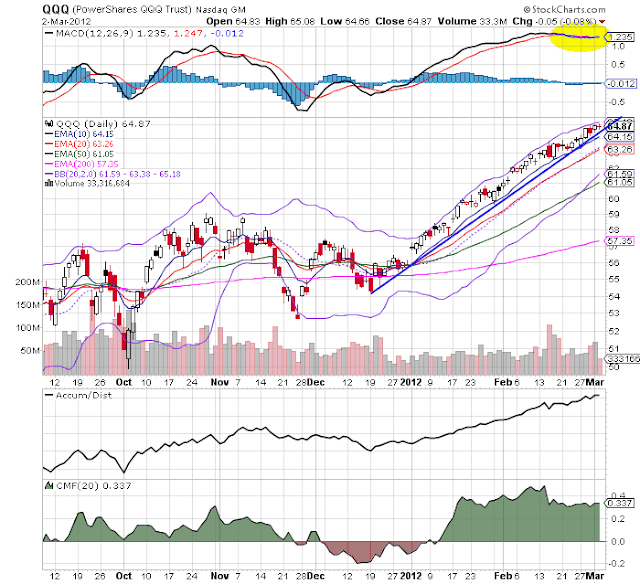 As the above two charts of the SPYs and QQQs show, the other averages are still firming in an uptrend. 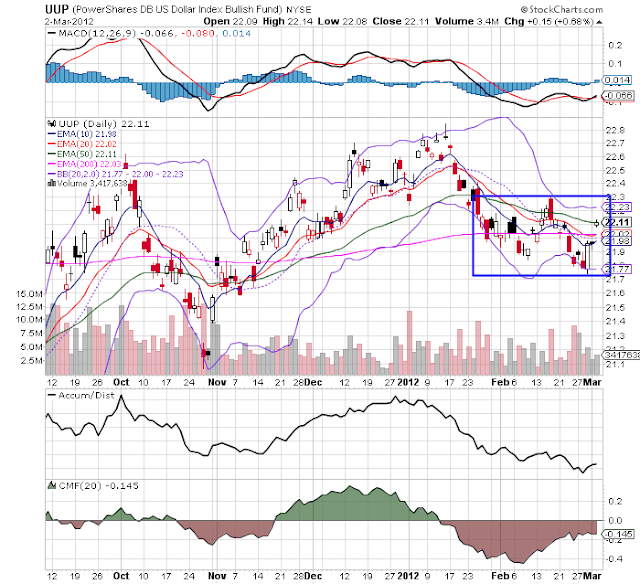 The dollar has been fluctuating around the 200 day EMA for the entire month of February.  In addition, 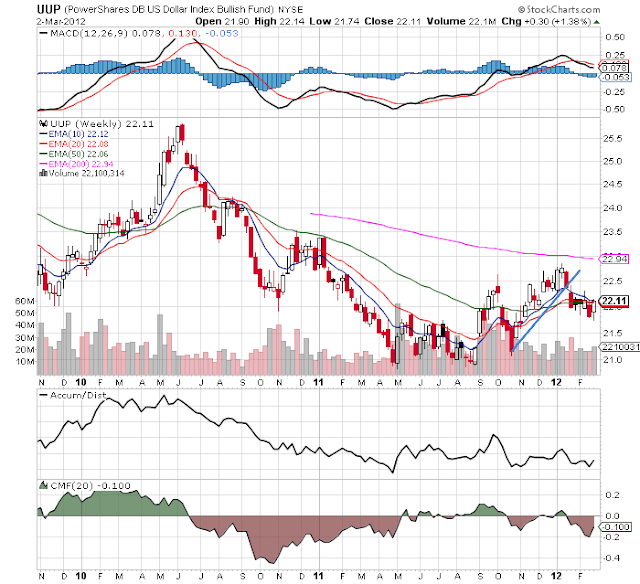 The weekly chart shows us that the dollar is at the bottom of a two year price range.  It rallied at the end of last year as a safe haven alternative to the euro, and has since fallen off.  But, we haven't seen a cliff diving chart by any stretch of the imagination.  In short, the dollar's long-term prospects are pretty rudderless right now. 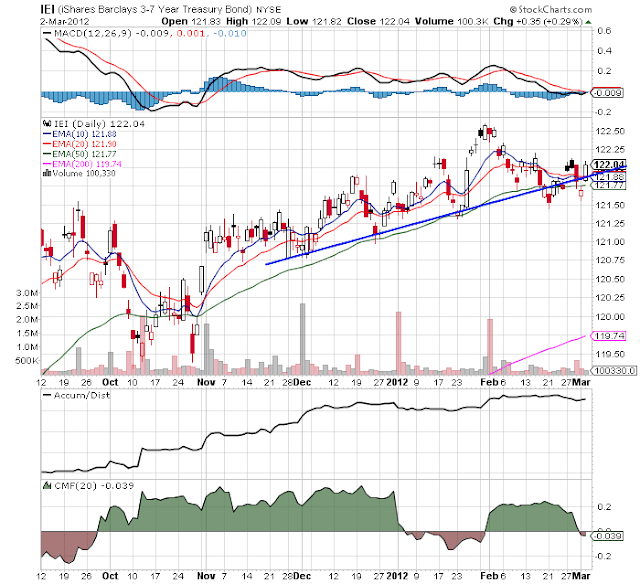 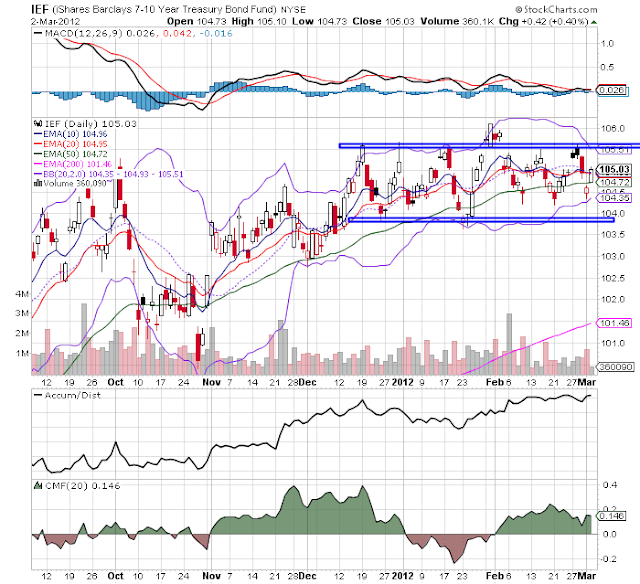 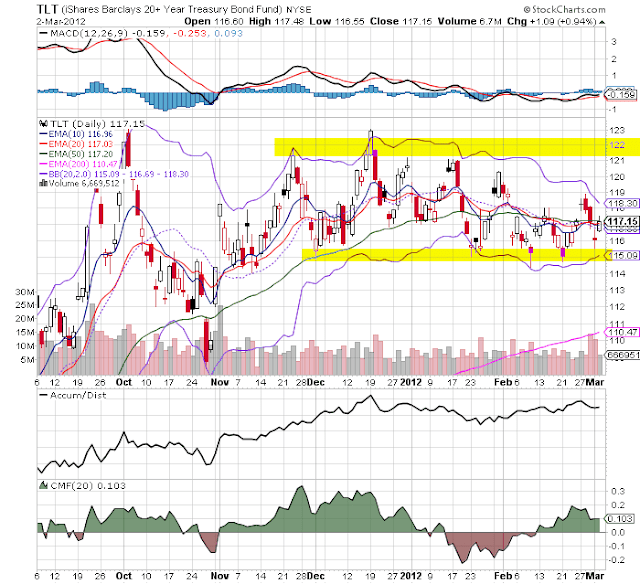 Last week, I noted that the IEIs had moved through support.  They reversed that move on Friday. Additionally, the IEFs and TLTs are still in a trading range.  While some of this is due to the Fed's purchase program, that's not not the entire reason for the range.  There is still a safety bid in the market keeping prices high -- and that bid is keeping money from the stock market.

UPDATE: Regarding the Fed's purchases relative to others, consider this from Bloomberg:


For all the concern that the $10 trillion market for Treasuries is dependent on Federal Reserve purchases to absorb a continually expanding supply of debt, the amount held by investors outside the U.S. has grown even more.

Foreigners increased their holdings of U.S. government debt by $1.84 trillion to a record $5 trillion since the Fed began the first round of Treasury purchases in May 2009, taking their stake to 60.5 percent of the securities not held by the central bank, government data show. The Fed added $1.18 trillion during that period, to $1.65 trillion, or 16.8 percent of the total, from 7.6 percent. 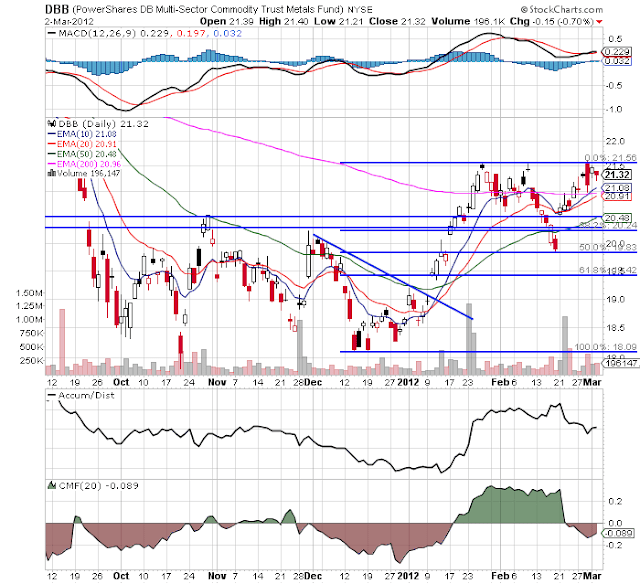 Industrial metals are still below price levels established in mid-January.  We need to see a move through this level it know if the bulls are back in charge of this market.

What we see is a continuation of the basic situation I outlined a few weeks ago.  The equity markets slowly correcting; they're simply in an overbought situation.  In addition, there is little fuel for a further rally as the treasury market is still at high levels.  Finally, the industrial metals chart shows there is still decent demand, so a recession probably isn't right around the corner.