US Equity Market Review For the Week of October 20-24

Since mid-September, the US markets have been in a downward trajectory.  Until the 2nd week of October, this sell-off was contained; it consisted of discplined moves lower with counter-trend trades driving the market back up.  However, the week of October 13-17 saw a large sell-off on high volume as the markets sold-off in the ~5%-6% range.  This created an oversold situation at the beginning of this week, leading to a reverse trend rally as traders saw undervalued securities. 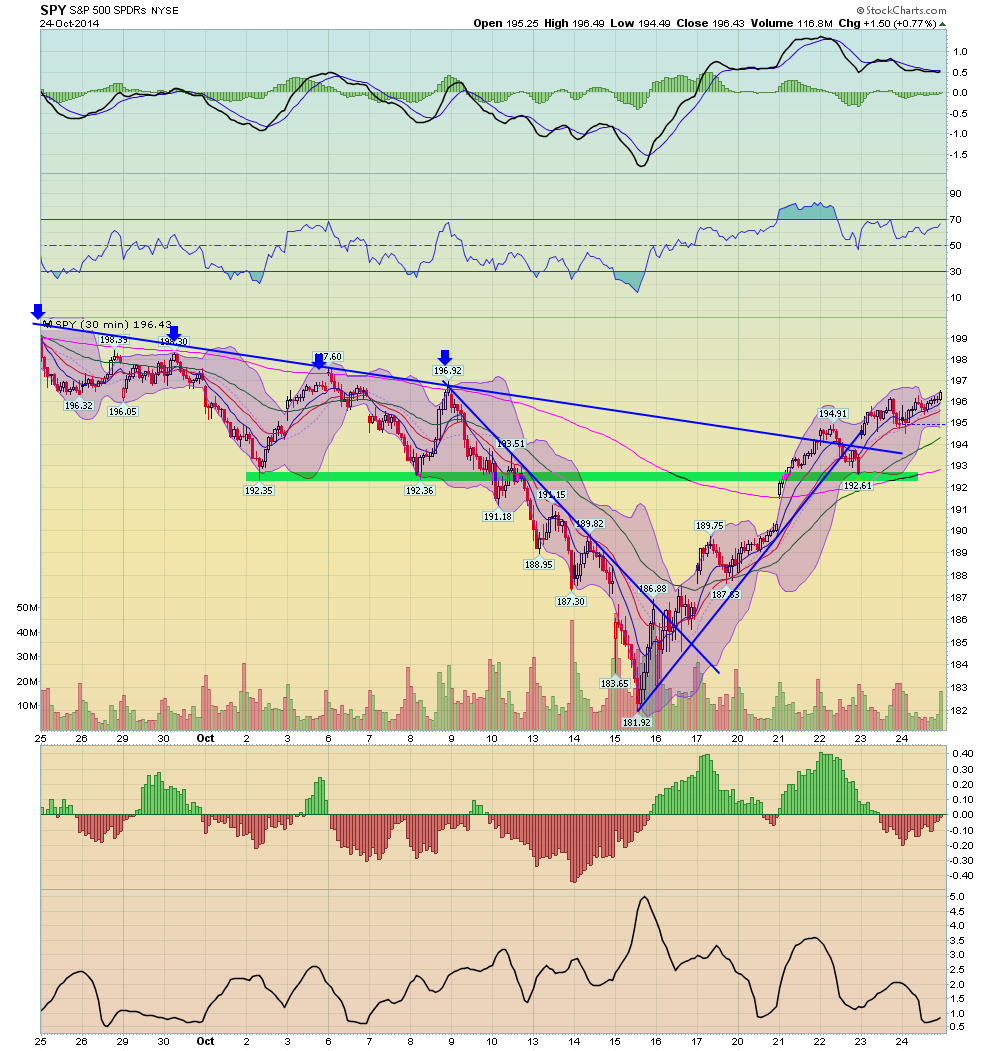 This situation is best seen in the 30 minute SPY chart, which shows that the sell-off actually began on October 8 when the market hit a peak of 196.92, which also represented the 200 day EMA.  Prices them moved into a solid downtrend, with declining momentum and increased volatility.  The decline eventually totaled 7.6%.  The rally actually started on Wednesday the 15th, as prices broke the downtrend line on the 16th and then traded sideways on the 17th.  The big move up came on Tuesday with prices printing a gap higher at the open followed by a continuing rally for the rest of the day.  For the rest of the week, prices meandered higher. 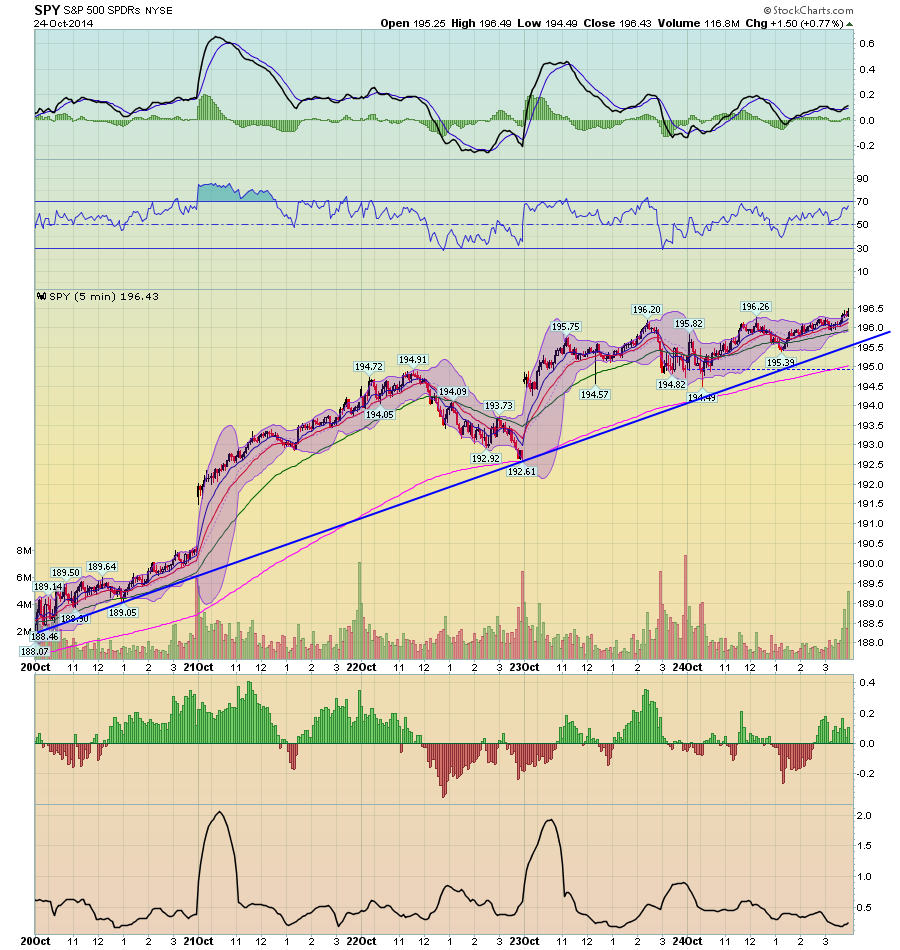 ﻿
The 5-minute weekly chart shows a continued uptrend lasting for entire week.  The big move higher was on Tuesday,  where we see the gap higher followed by a solid rally that lasted through the early morning on Wednesday.  Prices also gapped higher on Thursday, but they couldn't keep their momentum through the close.   On Friday we see a meandering rally as prices inched higher at week end. 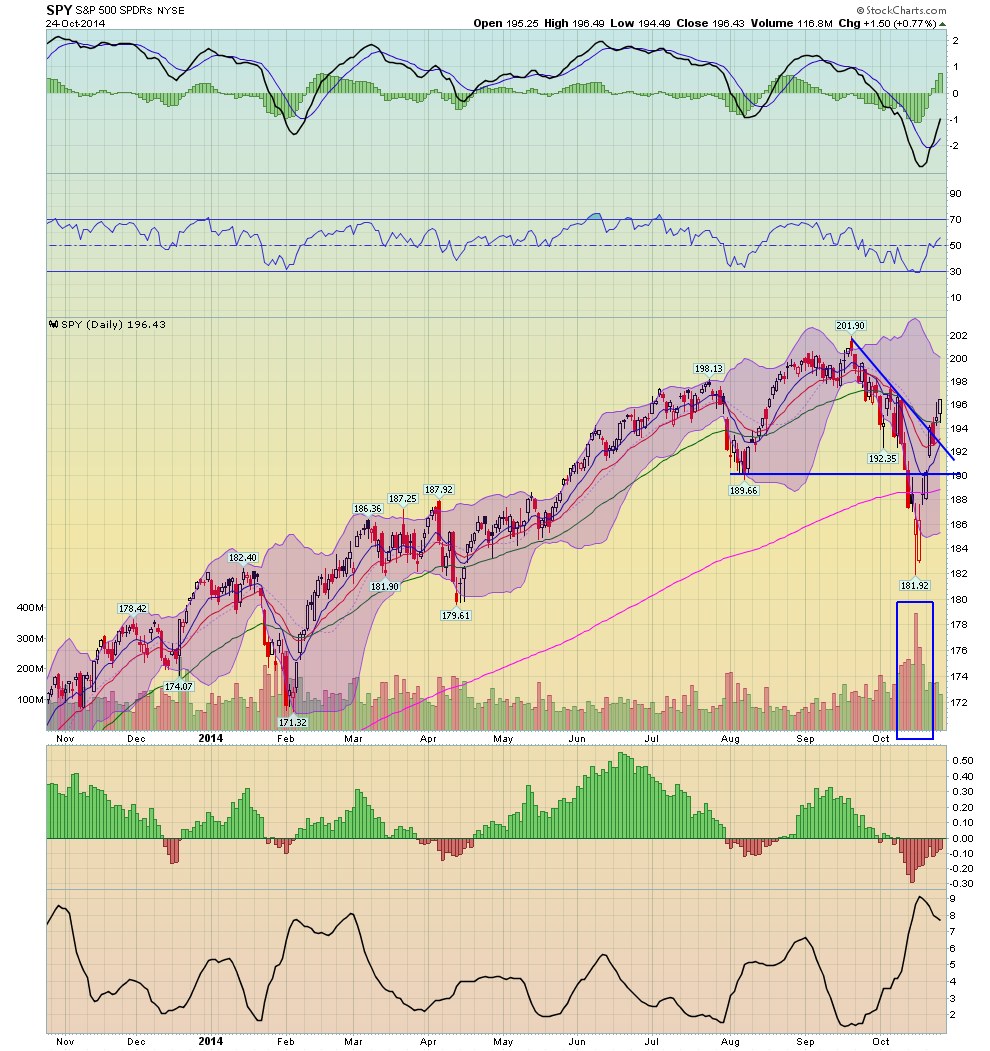 The daily chart places everything in perspective.  The biggest event of the last month was the dip below the 200 day EMA on high volume.  But last week there are several gaps higher as prices move through all the EMAs and resistance, albeit on weaker than desires volume. 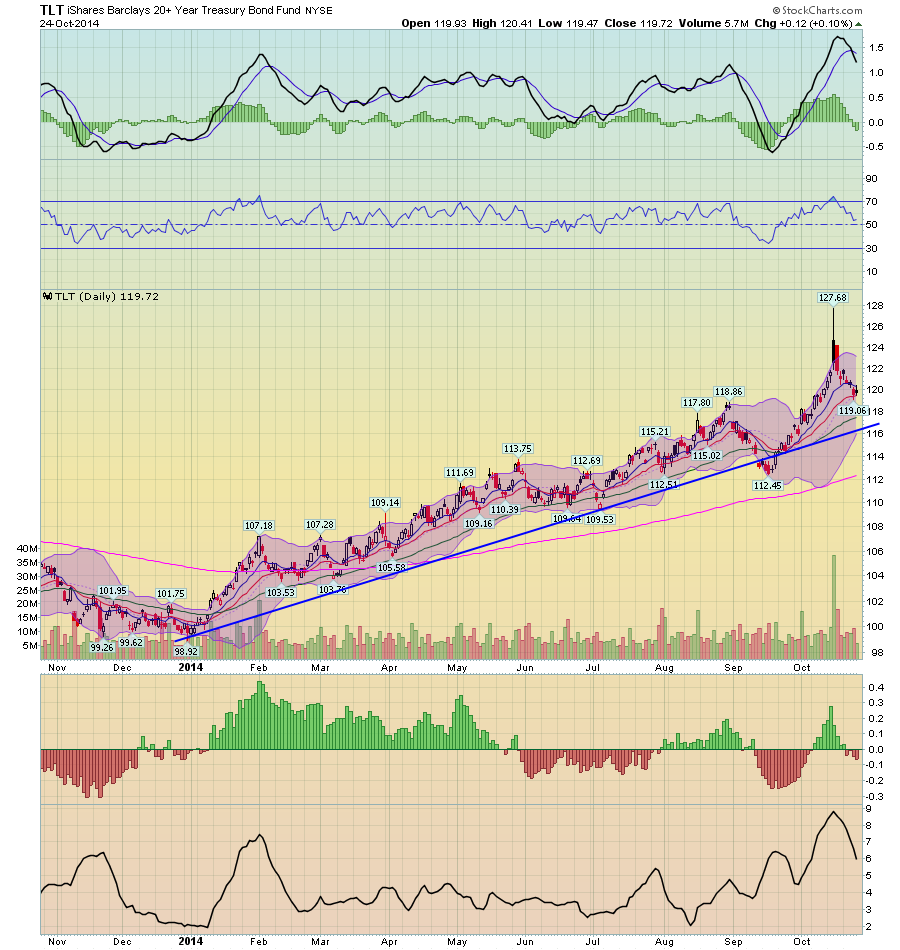 But I'm not at all convinced we're in for a continued rally, largely because of the treasury market. As the above daily chart of the TLTs shows.  Yes, prices did move lower last week, which would be expected as traders moved assets from bonds into equities to take advantage of the rally.  But there is still a year-long uptrend in place, which prices have broken once only to rebound within the same week. 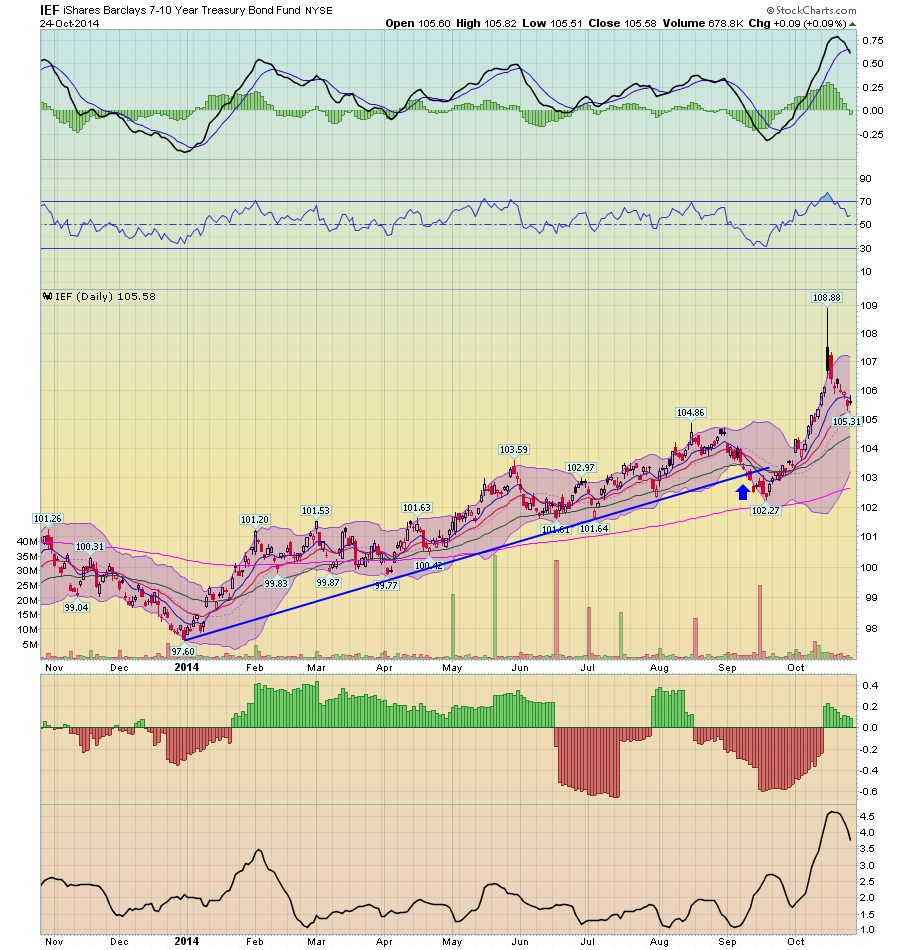 And the same technical situation exists on the shorter end of the curve.

Given the price action and overall macro environment, I'm thinking we'll see the following through the end of the year: 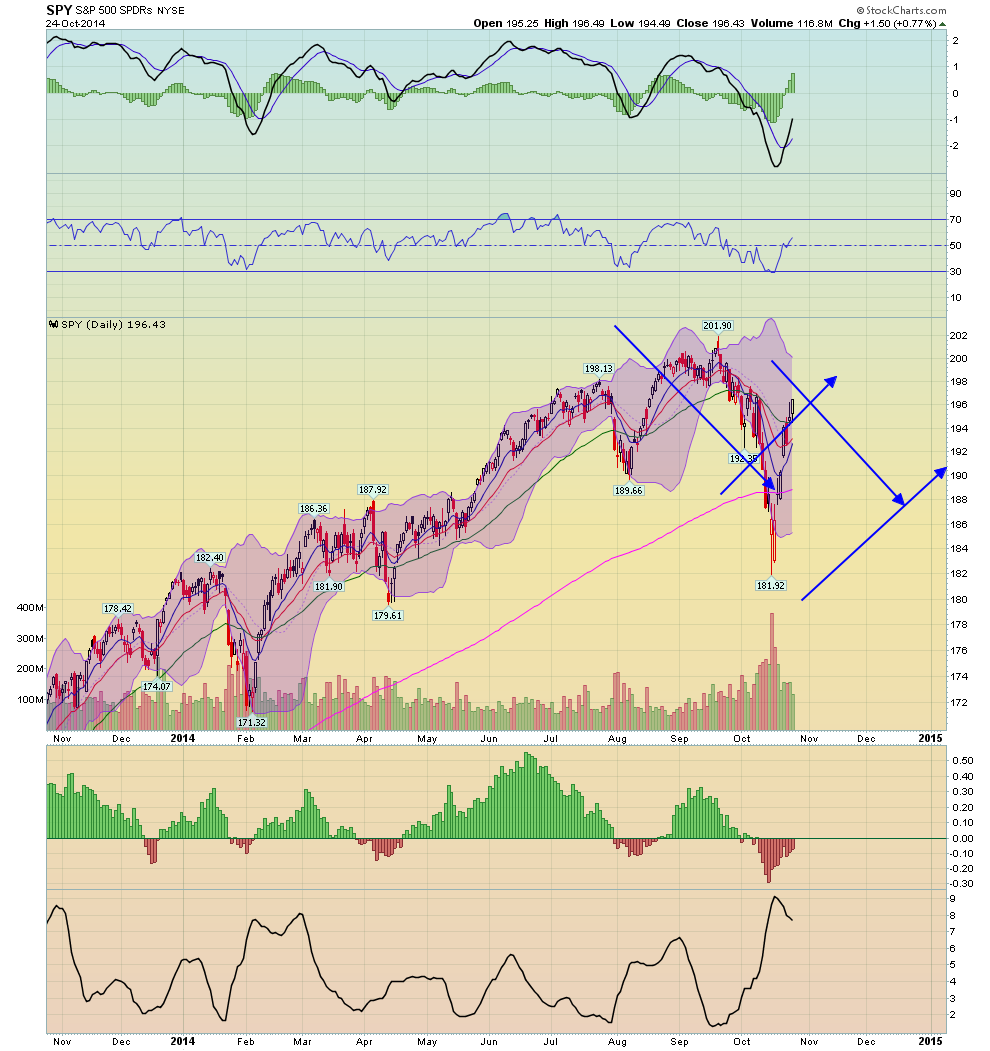 As I noted in the international news round up, there was an absence of bad news last week, not a plethora of good news.  That's not a recipe for a strong rally.  And there have been some pretty negative earnings news, including Amazon, IBM, McDonalds and Coke.  Here's Josh Brown on the topic:

IBM, Coca-Cola and McDonalds are three of America’s largest corporations and most well-known brands. They are true multinationals in every sense of the word and they dominate their industries both at home and abroad. They are numbers 23, 58 and 106 on the Fortune 500 list, respectively. Together, they make up 12 percent of the Dow Jones Industrial Average’s total weighting.

This is not to say all the news has been bad; as with any earnings season, there have been some upside surprises as well.  But given the degrading international situation, the lens through which we look at events has darkened a bit, making traders more likely to see things negatively.  And that's the primary reason why I think we're in for a slow but disciplined grind lower through year end.