Have new home sales made a bottom?

Hopefully you are recovering from your turkey coma today. Here’s a little late commentary on Wednesday’s new home sales report.

New home sales are noisy, and heavily revised, which is why I prefer housing permits, and especially single family housing permits, as a source of information.
But . . . on the other hand, new home sales tend to be the very first housing metric that turns. In fact, during expansions they often peak so early that they are more of a mid-cycle indicator than a long leading indicator. Here’s the comparison of new home sales with single family permits from the 1970s through the Great Recession:

Sometimes the two series peak and trough simultaneously, but not that often (1977, 1985, 1998, 2005) new home sales hit their peak a few months before permits.
Why is that of note? Here is the current expansion:

As per my comment above, new home sales peaked first. But also look at the far right side of the graph. New home sales bottomed in July and are currently at their level from last spring, while permits are still heading south.
Beware revisions, but new home sales may be signaling a bottom for the housing market, which might be correct if long term interest rates are in the process of peaking now, despite the Fed continuing to raise short term rates.
Median new home prices are not seasonally adjusted, so the only good way to look at them is YoY. Remembering as always that sales lead prices, here is the YoY% change in each:

Again, very noisy, but the overall YoY trend in prices is down. The 3 month average gain over the past year has declined from over 22% to under 12%, suggesting that new home prices are on the cusp of turning down in absolute terms.
On a more general note, notice that, having made a recession warning, I am now on the lookout for the indicators that will tell me how long and deep the recession might be, and when it might bottom out. Watching for a peak in long term interest rates is an important part of that process.
Posted by New Deal democrat at 8:39:00 AM

Jobless claims have a poor week, rising to multi-month highs

While one week like this shouldn’t set off any alarm bells, initial claims has been one of the increasingly few positive short leading indicators. Recently it has been more neutral, but it would only take about another 25,000 increase in the 4 week average to over 250,000 for this to turn fully negative, consistent with the “recession warning” I have written about several times in the past week.
At this point all 3 of my primary indicator systems - the long and short leading indicators tracked by the Conference Board and ECRI (pace Prof. Geoffrey Moore), the high frequency weekly indicators, and the “consumer nowcast” - are all signaling recession ahead.
On the bright side, manufacturers new orders rose 1.0% in October, and “core” capital goods rose 0.7%. This is one of the two components in the Conference Board’s Index of Leading Indicators that is still positive.
Also, new home sales will be released later this morning. I’ll update this post with a line or two later.
Posted by New Deal democrat at 8:17:00 AM

I have a new post up at Seeking Alpha, in which I lay out all of the short leading indicators, and conclude that the conditions have now been met for a recession to begin at any point in the next 6 months.

There’s one graph I intended to use which didn’t make it through to the final published piece. Here it is: 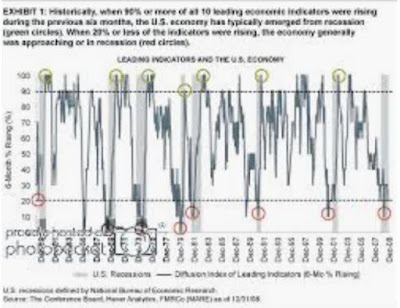 Typically recessions have only begun when 8 of the 10 components of the Index of Leading Indicators are down compared with their levels 6 months previously. And so, I go through the list . . . .

July +7.8%*
Aug +10.2%
Sep +1.2%*
Oct +12.2%
Nov +3.7% (to date)*
*= less than YoY% change in CPI
I’ll get back to this chart further below.
In the meantime, consider that the monthly household report is prepared from a sample of 50,000. The monthly establishment report is prepared from a sample over 100,000+. But tax withholding is a full and complete report of what every taxpayer/employer in the US remits daily to the Department of the Treasury.
As a result, total tax withholding receipts should come fairly close to mirroring aggregate payrolls, especially for non-supervisory workers, in the household jobs report. The one important difference is that even bosses pay withholding taxes, up to $147,000 of salary, on Social Security, and also on Medicare without any income limit. With that in mind, here is a graph of the YoY% change in aggregate payrolls for both non-supervisory workers and all workers for the past year:

Note that beginning in April, the YoY trend starts to decelerate markedly.
Back in August, Investors Business Daily highlighted the below graph of the monthly 10 week YoY% change in tax withholding to date: 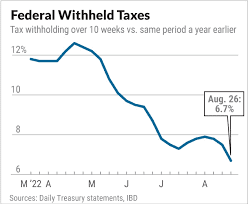 Note that, just like aggregate payrolls, with a one month delay it peaked and had declined ever since.
IBD hasn’t updated since, but the values are easy enough to calculate. As of the end of September, the 10 week YoY% change was 4.2%. As of the last daily report last week, the increase was only 3.7%.
Note that beginning in July in the IBD graph, and the updated information for the 10 week totals, and the monthly totals from July and September in the monthly chart above, *all* of the YoY% increases in tax withholding are less than the rate of inflation.
In other words, since July *even in the aggregate* non-supervisory workers at least are making less, adjusted for inflation, than they were at the same time in 2021.
Further, per my rule of thumb for non-seasonally adjusted YoY data, when the YoY% change declines by more than half, which in the IBD metric it did by September, the data has likely made its absolute peak and started to turn down in absolute terms (i.e., if we could seasonally adjust it).
Over the weekend I took a look at how tax withholding performed in the year leading up to and during the 2001, 2008, and 2020 recessions. In each case, I found that when tax withholding declined on a YoY% basis to a level of 1% or less above CPI, that coincided with a variance of one month with either weak jobs reports of less than 100,000 jobs gains, or even outright job losses, in either the household or establishment aspects of the jobs report.
Now here are the m/m gains/losses in the household and establishment jobs reports for the last 12 months:

What tax withholding data is strongly suggesting is that the actual job losses in the household reports in June and October were signal, not noise, and that there is a strong likelihood that the establishment numbers are going to be revised downward in the future as more complete data is updated.
Posted by New Deal democrat at 9:34:00 AM

﻿As we start Thanksgiving week, let’s take a look at the current state of COVID.

The Alphabet Soup of variants (most of which are direct descendants of BA.5), primarily BQ.1&1.1, has largely displaced their parent, which is down to 24% of all cases: 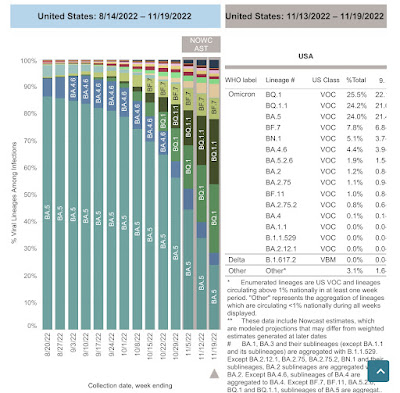 Typically new waves have peaked when the displaced variant is down to 10% or so of all cases, which should be the case with BA.5 in two or three weeks.
This is noteworthy, because as we will see below, the Alphabet Soup variants have not yet caused any real wave at all.
In the below graphs, I’m going to show the entire 2.5 year history of COVID as to each for comparison purposes.
Here’s BIobot’s waste particles data (dark line) vs. confirmed cases (light line): 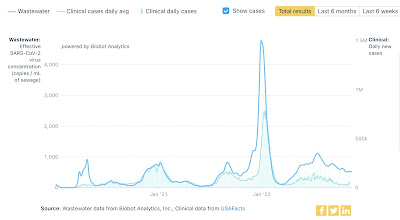 Since the end of last year, many people have relied on home tests and not bothered with confirmation, so the “real” number of cases is roughly equal to the peaks of the first 3 waves of the pandemic. This makes sense since each new variant has been more immune-evasive than the previous variants.
Regionally, we do see the likely beginning of a winter wave in the West, and also perhaps in the Midwest (but not the Northeast at all!): 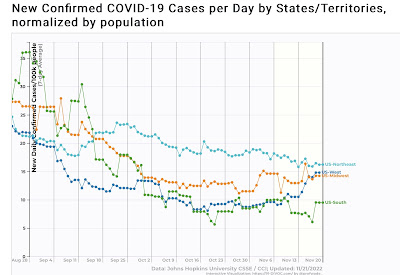 Despite this, hospitalizations are not elevated at all: 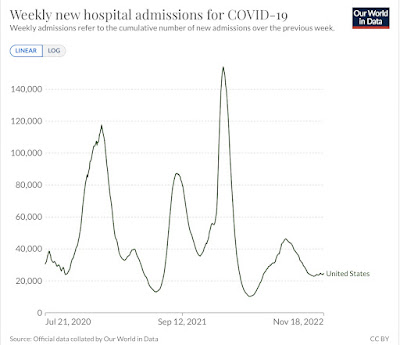 And deaths (thick line), when compared with cases (thin line), are near their all-time lows: 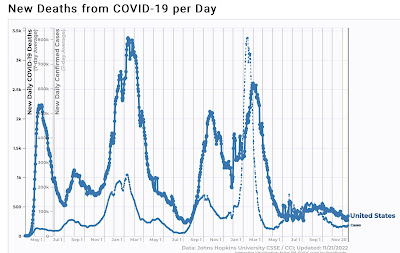 This has not gone unnoticed. Dr. Eric Topol, in his substack, calls the BQ.1.x variants the first displacing variants not to cause a new wave, pointing out that:
“in New York State, which has the highest level of BQ.1.1 in the US, there continues to be no sign of hospital admissions increasing. If anything, that rate is decreasing.” 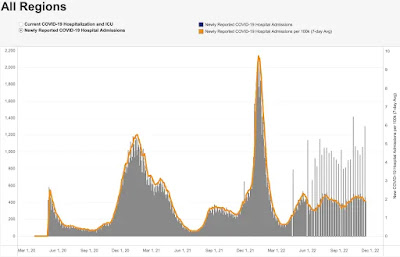 He concludes:
“It would be tempting to interpret the lack of impact of BQ.1.1, relative to its immune evasion properties, as we’re out of the woods. A population-level immunity wall has been built up over 3 years, with all the infections and vaccinations. Further, our T-cell immunity from these exposures, which isn’t assessed with these neutralization antibody assays, is helping us defend against variants. The optimistic viewpoint is that there’s little more that the Omicron family can throw at us which will be much worse than what we’ve already seen. That we’re done, going endemic, that the acute phase of the pandemic with big waves is over.
“Not so fast. As Daniele Focosi reminded us this week, the SARS-CoV-2 mutation rate has increased by 30% in the past year. There still could be room within Omicron, and especially the XBB recombinants, to pose a significant threat. Moreover, there’s the dismal prospect of a whole new family of variants to emerge (e.g. Sigma) that are distinct from the mutation cascade we’ve seen from Omicron for over a year.”

For now, I’m gong to go with the more optimistic scenario. As to XBB, that was responsible for a wave in Singapore, that quickly came and went all in the month of October: 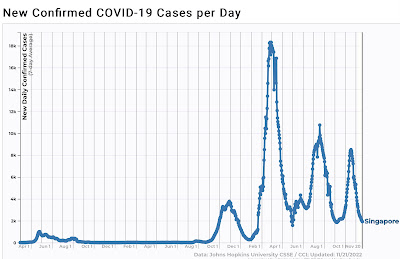 And no new lineage has managed to displace Omicron for the past full year.
In the meantime, I would still mask up in all public indoor spaces, not just for COVID, but to avoid this year’s bad flu outbreak as well.
Posted by New Deal democrat at 9:21:00 AM