With Delta definitely receding, it appears it had no meaningful impact on the consumer economy. What *is* continuing to happen, however, is that transportation bottlenecks are continuing to drive up related prices to levels not seen in a decade or more.

As usual, clicking over and reading should bring you up to the virtual moment, and reward me a little bit for the effort I put into amalgamating the data.

Housing is a long leading sector of the economy, and new home sales, while very noisy and heavily revised, tend to lead all of the other housing indicators. [Note: FRED hasn’t updated its charts with this morning’s information, so graphs below do not show this month].

This confirms what single family permits (red), which are much less noisy, suggested in last week’s report on starts and permits.
The number of houses for sale (which lags the number sold) also turned up, to 378,000, the highest level since October 2008 (gold in the graph below):

This was a YoY increase from July, but below the 22% pace of April and May.
Although I pay much less attention to existing home sales, which were released Wednesday, because they have much less of an effect on the economy, there is a special issue in that data because inventory collapsed in 2020 as few people were willing to put their houses on the market.
New listings in August were actually higher than one year ago, while total listings are still almost 25% lower than in August 2020. A more important comparison is with 2019, the year before inventory collapsed. In that regard, new listings in August were only -8.7% below two years ago, while total listings were less than 1/2 of that level. Below are total and new listings for existing homes, both normed to 100 as of that month:

As mortgage interest rates declined from their early year spike, new housing sales and construction have bottomed and have begun to increase. Meanwhile price increases, which lag sales, are decelerating albeit still at a very high level due to lack of inventory of existing homes. Finally, that inventory issue is slowly correcting itself. We can expect new listings of existing homes to be higher YoY within several months, and then the issue becomes how long until inventory increases all the way back to 2019 levels.

Jobless claims hold steady, as the Delta wave continues to roll out

Every day brings a bit more evidence in support of the forecast that the Delta wave is rolling out, at roughly the same rate as it rolled in. Meanwhile, this week’s report on  jobless claims pulled back a bit from last week, but kept the low trend intact.

Now that all emergency pandemic assistance programs have ended, watch to see if continuing claims decline precipitously in the next several weeks. Obviously they didn’t this week.

Here are both the 4 week average of initial claims and continuing claims from 1983 through the end of 2019 (both normed to zero as of this week’s numbers) for comparison:

As is easily seen, both numbers continue in typical mid-expansion ranges.

If the 4 week average of new claims drops below 325,000 - I.e., if the numbers drop into completely normal strong expansion territory - I  may discontinue weekly pandemic coverage of this metric. If Delta rolls out as sharply as I increasingly suspect it will, that may happen within the next two months.

Coronavirus dashboard for September 22: the Delta wave rolls out?

At last it appears that the Delta wave may be receding, as for now the US is on a definite downslope in cases. As of yesterday the US recorded 135,000 cases, a 31,000 decrease from the peak only 20 days before: 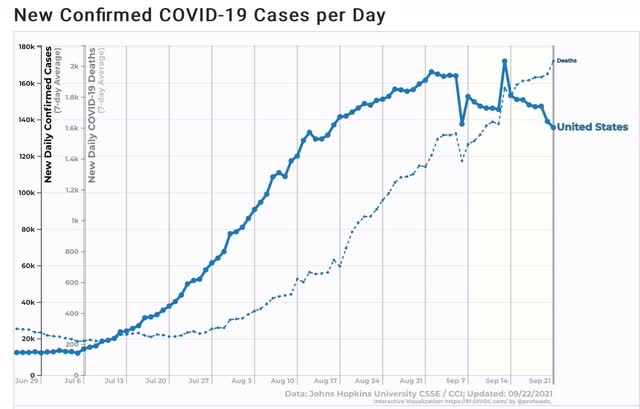 Deaths have continued to rise, but may peak out below the 2400 level I identified previously as the low end of the range for a likely top by the end of this month.
A look at the regional breakdowns shows that the Northeast and Midwest have continued to rise, albeit slowly, and may or may not be peaking. The West has declined, mainly driven by California. But the big news is that in the South, where Delta hit early and severely, cases have declined by 30%: 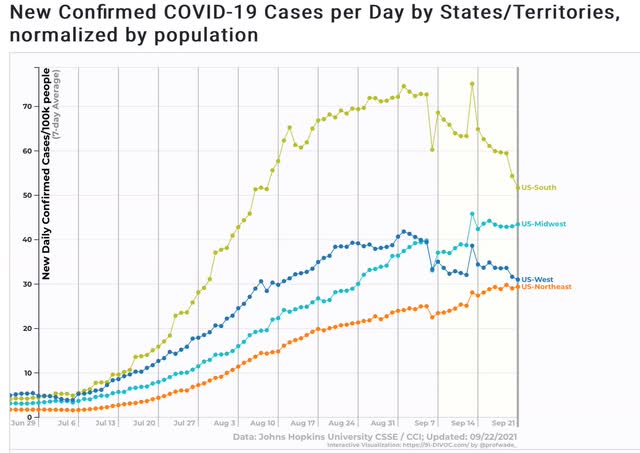 Further, when we look at the 10 worst jurisdictions for cases, only South Carolina is from the Deep South. Aside from Guam, we have 3 States - KY, TN, and WV - from the Appalachians, and 5 - AK, ID, MT, ND, and WY - sparsely populated States in the northern West: 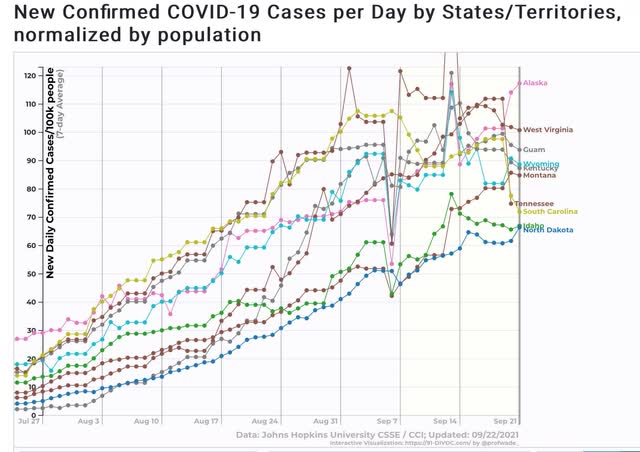 Needless to say, all of these States are among the lowest vaccinated.
An issue is whether the opening of the school year in the North will drive cases to a new peak. Since schools have been open over 2 weeks, and given the fast transmissibility of Delta, we ought to be seeing not just an increase, but an acceleration of that increase, within the next week, if school spread is enough to cause a renewed Delta wave.
In that regard, let me just show cases and deaths in Israel, which has a similar vaccination profile to the US, with a similar anti-vaxx religious component: 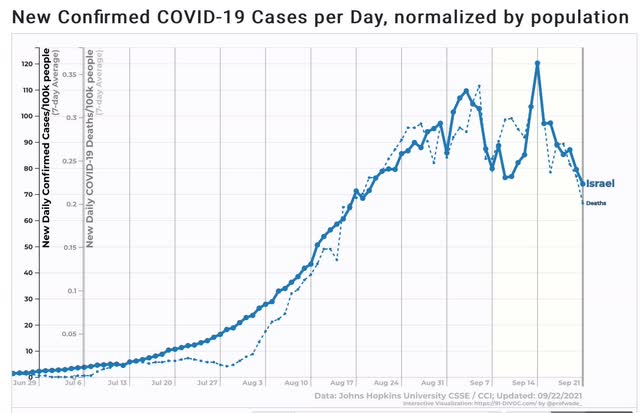 Cases and deaths are both down about 1/3rd from their recent peak there, even with schools open.
An even better example is India, where the Delta variant first struck: 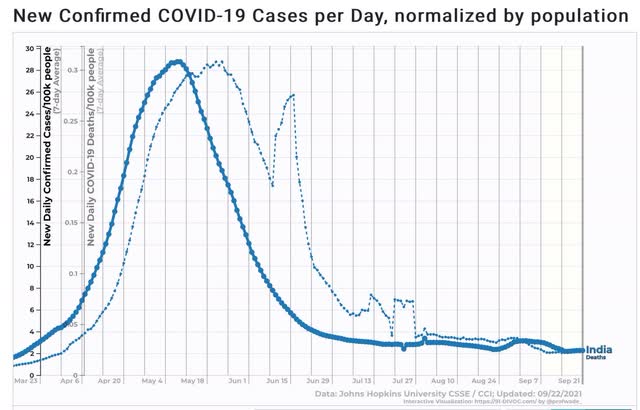 Cases and deaths have totally reverted to background rates, declining by more than 90% from peak - and I hear tell that there are schools in India, so that doesn’t seem to have precluded the decline.
If by the end of this month we don’t see a big increase from the reopening of schools in the North, then I expect the Delta wave to continue to ebb until cold weather arrives.
Posted by New Deal democrat at 11:26:00 AM

This morning’s report on August housing permits and starts shows that the stabilizing of mortgage rates in the past few months has now stabilized housing construction.

Last month I noted that the YoY comparisons were going to become much more challenging, given the boom in construction late last year. With the stabilization of construction, both measures of permits as well as starts remained above their levels of one year ago:

As mortgage rates declined from 3.7% to 2.7% throughout 2020, single family housing permits increased over 30% from roughly 950,000 annualized to 1,270,000. After the increase early this year in mortgage rates to 3.2%, housing cooled, but in the past 4 months rates have settled in the 2.85%-3.0% range, and housing can be expected to resume a moderate increasing trend in response. This in turn suggests that the economy, which tends to follow housing with a 1 year+ lag, after a period of cooling early next year, will also stabilize later on.
Posted by New Deal democrat at 8:15:00 AM

Let’s take a look at the affordability (or not!) of housing, since there is no economic news of note today.

Last week the Census Bureau released their annual report on median household income for the US, covering 2020. Since this is the best measure to gauge housing affordability, rather than average wages or income, this is a good time to update this information.
Median household income declined in the US last year due to the pandemic, and the tsunami of unemployment that accompanied it. Still, at $67,521 it was still 40% higher in nominal terms than it was at the peak of the housing bubble in 2006, when it was $48,201:

Below I compare house prices measured by the FHFA house price index and the Case Shiller national index, deflated by median household income (dark and light blue) and by average hourly wages (red and violet) as a monthly proxy. The results are normed to 100 as of the peak of the housing bubble in 2006:

Note that, because “average” wages are skewed higher than “median” wages, house prices appear more affordable in average hourly wage terms than in median household income terms. Specifically, in 2020 FHFA prices deflated by median household income were only 5.3% below their peak in 2006, and similarly deflated Case Shiller prices were 13.5% below theirs.
While median income for 2021 won’t be reported for another year, we do have both house price indexes through June of this year, and they are up a further 17.4% and 17.7% since mid year of 2020:

If median household income from 2020 were held constant (it won’t be, there will be an increase this year because of the big gains in employment), in both cases “real” house prices would be higher than their bubble peak!  But even if nominal median income increases this year back to where it was in 2019 just before the pandemic, house prices would at least be very close to their all time record as a multiple of household income.
But if house prices compared with household income are close to or at an extreme high, the situation is quite different when we look at monthly mortgage payments, because interest rates have declined so much in the past 15 years.
At the peak in July 2006, mortgage rates were 6.76%. In June they were only 2.98% (red, right scale):

While house prices as measured by the FHFA index have gone up 54.6% in that time, the monthly mortgage payment to finance that house increase went up less than 1%! And remember, the median household has had a 40% increase in income to finance that less than 1% increase in mortgage payments.
The bottom line remains that, if you can afford the down payment on a house, even at these extreme levels, the monthly mortgage payment is not near an extreme at all. This is probably while the “affordability index” of the National Association of Realtors is equivalent to its poorest level in the past 10 years, it is still nowhere near as low as it was at the peak of the housing bubble (when it was below 100, not shown):

I think seriously derailing the housing market to where it might spark a recession is only going to take place if there is another year of huge price increases, or else a hike of 1% or more in interest rates, or both.
Posted by New Deal democrat at 10:23:00 AM