Weekly Indicators for September 5 - 9 at XE.com

Last week I noted some wobbles in the recent paradigm of positive leading indicators, negative coincident indicators.  This week the wobbles continued to fluctuate in various directions.
Posted by New Deal democrat at 8:26:00 AM

A few months ago I posted a "road map to the next recession."  So are we closer or futher away?  Hint:  Thank you, Brexit!!!

So, what does this mean for interest rates? In the context of a strong economy with good momentum, it makes sense to get back to a pace of gradual rate increases, preferably sooner rather than later. Let me be clear: In arguing for an increase in interest rates, I’m not trying to stall the economic expansion. It’s just the opposite: My aim is to keep it on a sound footing so it can be sustained for a long time.5

History teaches us that an economy that runs too hot for too long can generate imbalances, potentially leading to excessive inflation, asset market bubbles, and ultimately economic correction and recession. A gradual process of raising rates reduces the risks of such an outcome. It also allows a smoother, more calibrated process of normalization that gives us space to adjust our responses to any surprise changes in economic conditions. If we wait too long to remove monetary accommodation, we hazard allowing imbalances to grow, requiring us to play catch-up, and not leaving much room to maneuver. Not to mention, a sudden reversal of policy could be disruptive and slow the economy in unintended ways.

Reports from the twelve Federal Reserve Districts suggest that national economic activity continued to expand at a modest pace on balance during the reporting period of July through late August. Most Districts reported a "modest" or "moderate" pace of overall growth. However, Kansas City and New York reported no change in activity, and Philadelphia and Richmond noted that, while still expanding, activity slowed from the previous period. Contacts across the twelve Districts generally expect moderate economic growth in coming months. Overall consumer spending was little changed in most Districts, and auto sales declined somewhat but remained at high levels. Tourism activity was flat from the previous report but above year-earlier levels. Sales of nonfinancial services gained further momentum. Manufacturing activity rose slightly in most Districts. Activity in residential real estate markets grew at a moderate pace, but the pace of sales was constrained in a few Districts by shortages of available homes. Commercial real estate activity expanded further. Demand for business and consumer credit varied across Districts but appeared to expand at a moderate pace overall, with stable credit quality. Agricultural conditions were mixed, with price declines largely offsetting growing volumes. Overall demand for energy-related products and services weakened. 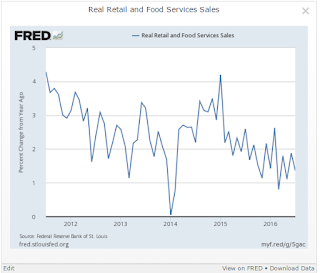 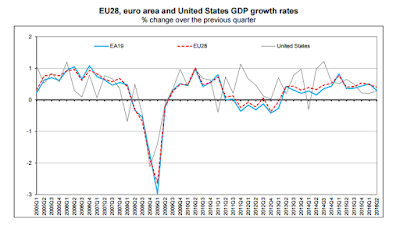 Notice the drop in exports and imports over the last 4 quarters.  In contrast, household spending the business investment have been stead for the EU 19.

EU Markets are Improving Relative to the SPYs 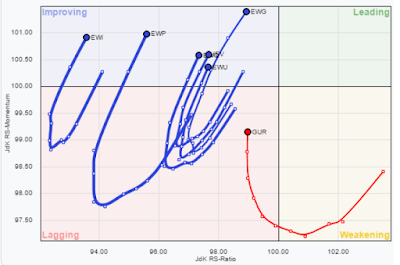 The surprisingly sharp drop in yesterday’s release of the ISM Non-Manufacturing Index for August has unleashed new worries that the US economy is weakening as it heads into the final months of 2016. It doesn’t help that the Federal Reserve’s broadly defined Labor Market Conditions Index (LMCI) dipped back into negative territory last month. Neither of these soft numbers present a smoking gun for arguing that the US is slipping into a new recession, but the news raises more doubts about the wisdom of raising interest rates at the Fed’s monetary policy meeting that’s scheduled for Sep. 20-21. 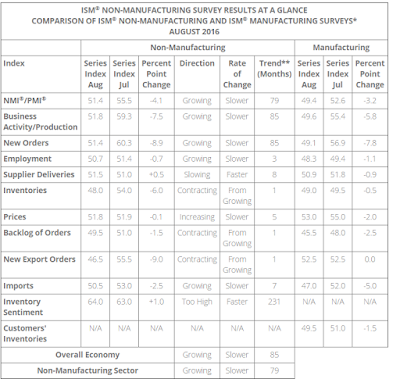 Eight years after the housing bust drove an estimated 30 percent of construction workers into new fields, homebuilders across the country are struggling to find workers at all levels of experience, according to the National Association of Homebuilders. The association estimates that there are approximately 200,000 unfilled construction jobs in the U.S. - a jump of 81 percent in the last two years.

The ratio of construction job openings to hiring, as measured by the Department of Labor, is at its highest level since 2007.

"The labor shortage is getting worse as demand is getting stronger," said John Courson, chief executive of the Home Builders Institute, a national nonprofit that trains workers in the construction field.

The impact is two-fold. Without enough workers, residential construction is trailing demand for homes, dampening the overall economy.

And with labor costs rising, homebuilders are building more expensive homes to maintain their margins, which means they are abandoning the starter home market. That has left entry-level homes in tight supply, shutting out may would-be buyers at a time when mortgage rates are near historic lows.

Financials Margins of the 20 Largest Homebuilders by Market Capitalization 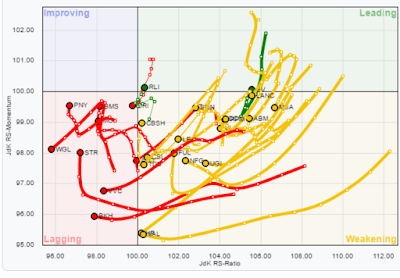 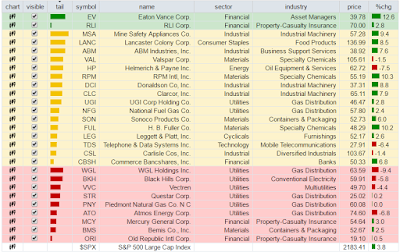 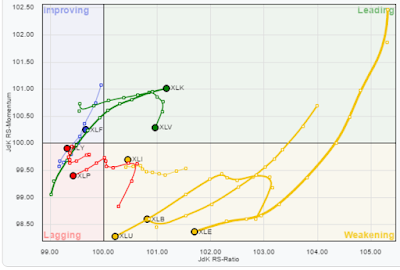 Right now, technology and financials look attractive relative to the SPYs.  Financials are especially attractive due to the high possibility of an upcoming rate hike. 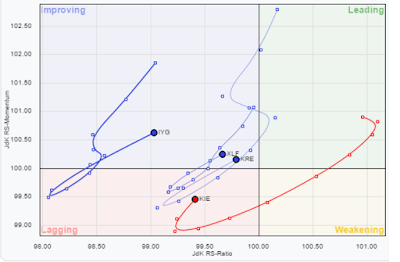 International Week in Review
Posted by Unknown at 7:06:00 AM