Weekly Indicators for May 2 - 6 at Seeking Alpha

Over the past few months, indicators across all timeframes have deteriorated. With increasing interest rates, and another Fed rate hike, that trend continued, and spread to credit conditions in a significant way.

As usual, clicking over and reading will bring you up to the virtual moment, and will bring me some lunch money.

I got a late start on this report today. I’ll add a much more detail shortly, but for now, be advised in summary that while the establishment report was strong, with mainly positive internals, the household report was very weak, with some very weak, albeit mainly still positive, internals.
To be continued . . .
——-
UPDATE:
Just as one month ago, I was most interested in three main issues:
1. Is the pace of job growth beginning to decelerate?  (Not in the establishment survey, *definitely* in the household survey)
2. Is wage growth holding up? Is it accelerating? (It is still strong, but decelerated slightly)
3. Are the leading indicators in the report beginning to flag? (Not yet, at least not significantly)
We still have 1.2 million jobs, or 0.8% of the total to go to equal the number of employees in February 2020 just before the pandemic hit. At the current average rate for the past 6 months of 552,000 jobs added per month, that’s 2 months from now
Here’s my in depth synopsis of the report:
HEADLINES:
Leading employment indicators of a slowdown or recession
These are leading sectors for the economy overall, and will help us gauge whether the strong rebound from the pandemic will continue.  These were positive:
Wages of non-managerial workers
Aggregate hours and wages:
Other significant data:
SUMMARY
This report had a decidedly split personality. The Establishment report, which asks employers about their hiring, continued to hit on almost all cylinders, with both the total number of new jobs, and the growth of jobs in the leading sectors, continuing to increase at a solid clip. Although the YoY pace of wage gains decelerated a little, it still increased solidly as well. The only downsides were the decline in the manufacturing workweek, and more importantly, the slight downward revisions of the past two months.
The situation was completely different in the Household report, which asks individuals what their employment situation is. This month - and the previous two months as well - increased at a rate that didn’t even keep pace with the growth in the adult population. The unemployment rate held steady, but the underemployment rate rose, and the labor force participation rate declined. The number of persons working full time also declined significantly.
At turning points, the household report generally leads the establishment report. So the softness in the household report raises a caution flag. I have been expecting the sharp deceleration in consumer spending to show up in hiring, and this month’s household report may be the first sign of that happening.
Posted by New Deal democrat at 8:12:00 AM

The “job openings” component of the March JOLTS report released on Tuesday, indicated that there was no abatement in the number of employers participating in the new game of employment “musical chairs.” But the graph above shows a slight trend of increased new layoffs, which might just be noise. Or maybe not.
Posted by New Deal democrat at 7:50:00 AM

The two most important purchases ever made by most consumers are (1) their houses, followed by (2) their motor vehicles. Indeed, according to Prof. Edward Leamer‘s forecasting model, ever since the end of World War 2 almost all American recessions have been preceded by, first of all, a decline in new home purchases about 6-7 quarters before, followed by a decline in the purchase of new motor vehicles about 9-12 months before.

By all reasonable accounts, the US economy Boomed last year, with real GDP up 5.5%, industrial production up 3.4%, manufacturing up 3.9%, and employment up 4.7%.
So one would think that the production of houses and motor vehicles would approach prior expansion peaks. Well, let’s take a look.
The below graph shows houses where permits have been issued, but construction has not yet started (blue), and sales of cars and light trucks (pickups and SUV’s)(red):

As of one month ago, 300,000 new houses had been authorized but not yet started. Light motor vehicle sales were 13.4 million. That’s 40% more houses than usual, and 25% fewer light vehicles than on average.
In short, supply constraints (e.g., lumber and semiconductors) have seriously impacted the production of the two most important consumer staples.
Unsurprisingly, the prices of both have skyrocketed, up about 20% since the end of 2020:

This is a very simple explanation of the most serious economic problem in the US right now.
Posted by New Deal democrat at 8:23:00 AM

March JOLTS report: the game of musical chairs in the jobs market intensifies to all-time highs

In March, as this morning’s Census Bureau JOLTS report shows, the game of musical job chairs in the jobs market has actually intensified to all-time levels. Specifically, both job openings and quits made all-time highs, and total separations during their entire 20 year history were only higher in March and April 2020.

As a refresher, some months ago I introduced the idea that the jobs market was like a game similar to musical chairs, where employers added or took away chairs, and employees tried to best allocate themselves among the chairs. Because of the pandemic, there are several million fewer players trying to sit in those chairs, leaving many empty. As a result, wages have continued to increase sharply, as employers attempt to attract potential employees to sit in the continuing big number of empty chairs.

I’ve followed up by positing that the game of musical chairs will only slow down once some employers throw in the towel, and the number of job openings signficantly declines. As noted above, in March the opposite happened.
To the numbers . . .
Layoffs and discharges (violet, right scale in the graph below) rose 51,000 to 1.405 million, a 6 month high, versus their record low of 1.262 in December. Total separations (blue) rose 239,000 to 6.321 million (graph starts in June 2020 for reasons of scale):
[Note: FRED inexplicably hasn’t updated with today’s data yet. I’ll update this post once they do. In the meantime, below I’ve copied similar graphs from other sources/] 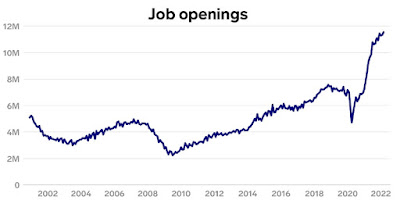 On a historical level, layoffs still continue to be very low.
Meanwhile, job openings (blue in the graph below) rose 205,000 to 11.549 million, a new all-time high. Previously openings had appeared to be leveling off after gradually increasing to repeated record highs. Voluntary quits (the “great resignation,” gold, right scale) rose 52,000 to 4.536 million, also following a period of apparent leveling off. Actual hires (red) declined 95,000 from February’s revised all-time high of 6.832 million to 6.737 million: 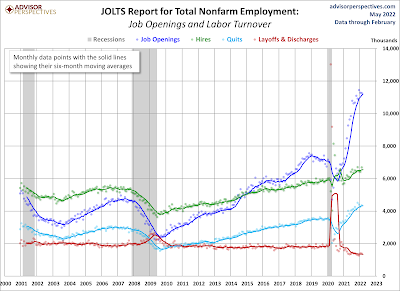 In summary, and to reiterate, the message of these numbers is that the competition by employers to attract employees has only intensified. Because of the continuing yawning gap, wages have continued and should continue to soar. As shown in the below graph of job openings divided by actual hires (blue, right scale), where 1.0 represents the level at which the number of openings and hires are equal, in the last 18 months this ratio has repeatedly made new all-time highs.
Thus I expect this Friday’s jobs report to show that wages continue to rise at a very strong pace, even though the slowing in consumer spending growth points toward weaker monthly gains in the number of jobs.
Posted by New Deal democrat at 12:27:00 PM

Manufacturing and construction start out the month with positive prints

As per usual, the new month starts with updates on manufacturing and construction.

The ISM manufacturing index, and especially its new orders subindex, is an important short leading indicator for the production sector. This remained positive, but there has been a definite slowing in the past two months.

In April the index declined from 57.1 to 55.4, and the new orders subindex also declined from 53.8 to 53.5, the lowest reading since 2020. As noted above, these remain positive, since the breakeven point between expansion and contraction is 50: 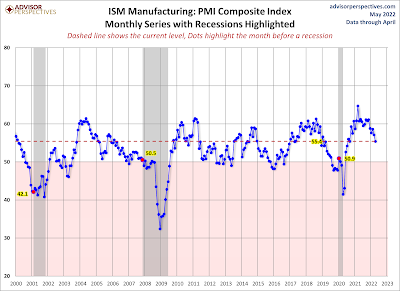 This forecasts a continued expansion on the production side of the economy through summer - but nowhere near the red-hot and even white-hot pace of last year.
Meanwhile, construction spending for March rose 0.1% in nominal terms for overall spending including all types of construction, while the leading residential sector also rose 1.0%, both thus making new highs:

While total construction spending has declined by more than the -10.4% it did before the Great Recession, the decline in residential construction spending, while increasingly substantial, remains nowhere near the -40.1% decline it suffered before the end of 2007. In general this series has been helped considerably by the fact that the cost of construction materials has stopped rising, at least for now.
Together, these two reports point to continued growth, albeit at a slower pace, in manufacturing and construction* in the next few months.
*recalling that it takes awhile for the downturn in mortgage applications and sales to filter through into actual construction.
Posted by New Deal democrat at 10:02:00 AM