Real M2 has already turned into a negative. Now M1 is also declerating sharply.
Posted by New Deal democrat at 7:52:00 AM

Is the secular economic season beginning to change (Part 2)

The selloff of a month ago may well be the harbinger of a fundamental change in the relationship between bond yields and stock prices, one that is likely to persist for the next 10 years or so, as  part of a very long term interest rate cycle that has tended to last about 60 years.

A note about residential spending

Today is one of those days where a whole slew of data gets reported. I wanted to add a quick note about residential construction.
Residential construction spending has the virtue of being "where the rubber meets the road" in the housing market, and further, while it lags permits, it is the least volatile measure of all, even compared with single family permits. Here they are measured YoY:

If housing signals recession, we will see it first in permits (and new home sales), but residential construction should confirm the negative reading months before any downturn actually begins.

Great news on job security, but on income line workers can hold back on breaking out the champagne

Some really good news this morning, but a note to hold your horses on the celebration of at least one aspect of that news.

Initial jobless claims, which I've called the single most positive data point in the entire economy, posted nearly a 50-year low at 210,000. On a population- or labor force-adjusted basis, it is an all time low.

Bottom line: people may not have great jobs, but the jobs they have are more secure now than they have been at any point since the 1960s.  That's great news.

There was good news in personal income and outlays as well, with a strong +0.5% increase in income, and a pop in the savings rate from 2.5% to 3.2%.

BUT ... the big positive news looks like a one-time jump based on the payment of bonuses, and also the decline in tax withholding in January due to the tax law changes passed by Congress.

Here's the important note from the Commerce Department:

Also noteworthy is that monthly tax withholding, based on the Commerce Department's $115 Billion annual estimate, boils down to just shy of $10 Billion per month, or about 5% of  current withholding. That will continue, so the YoY comparisons will continue to be good, but this is a one-time pop on a m/m basis. Keep in mind that other provisions of the tax changes, especially real estate and state tax provisions, may offset most of this improvement, but won't be shown in the personal income and outlays reports.

So while line workers' jobs may be very safe, there may actually not be significant net improvement in their take-home pay. Great overall news, but unless you get bonuses as a manager, you may withhold popping the cork on the champagne.

Are housing costs beginning to bite?


Housing prices continue to increase, with both the Case Shiller and FHFA house price indexes yesterday showing YoY gains in excess of 5%. Meanwhile mortgage rates hit a new 4 year high again yesterday at 4.58%.  Are the increased purchase and monthly carrying costs of housing beginning to have an effect?

It certainly looks that way when you look at existing home sales, growth of which has nearly flatlined in the last 18 months (note this is the absolute number,not the YoY change):

But YoY% growth for new home sales, while very volatile on a m/m basis, since late 2014 has generally continued at about 5% YoY:

The Fed does keep track of real estate loans for housing, but this is a cumulative measure, so what we mainly see is growth of 50% in outstanding loans (!) during and in the immediate aftermath of the bubble, with very subdued total growth since:

Is the sideways movement in this figure since October meaningful, or just another pause?  Impossible to tell.

Which brings me to purchase mortgage applications, reported weekly by the Mortgage Bankers Association.  Here is Bill McBride's graph from earlier this morning: 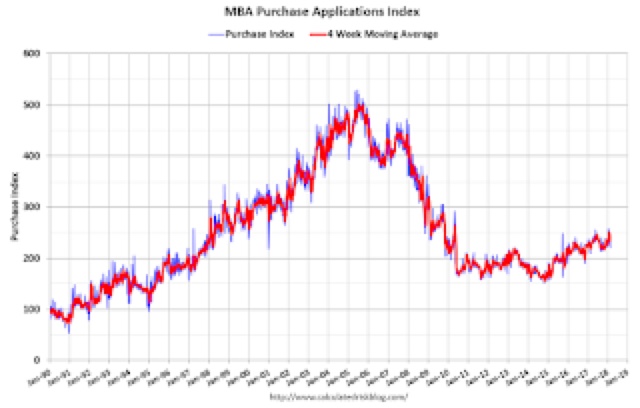 Just a quick eyeballing of the graph seems to show a little slowing down recently, but unfortunately we don't have YoY comparisons.

But I do track this data as part of my "Weekly Indicator" watch. I've noticed some softness recently, so I went back to crunched a few numbers on a preliminary basis. I sampled the first week of each month in the last 6 months of 2017. The average YoY% increase in applications was 7%. Since the slowdown started in the latter part of December, however, the YoY% increase has slowed to an average of about 4.5%.

We had a similar pause in early 2017, and that resolved positively. It's too early to know if the recent slowdown in purchase mortgage applications is signal or just noise. But it certainly bears closer watching. At some point increased mortgage rates and/or increased prices must slow or stall the market.
Posted by New Deal democrat at 9:23:00 AM

Is the secular economic season beginning to change? (Part 1)

This recent 10% correction contained an element that made me go back and look at a long-term forecast I made nearly 8 years ago. The economic "season" may be beginning to change.

With the release of New Home Sales, we have a more complete look at the status of housing in January.

Two months ago, I suggested that you restrain your enthusiasm for a blowout number to the upside. Today, the opposite is also the case: ignore the Doomers' inevitable gloom about a big disappointment to the downside.

In case it isn't clear from that longer term look at the trend, here is the last 18 months:

With a few pauses along the way (most of 2014 and 2017) due to temporary increases in interest rates, housing has plodded along at about 5% gains per year. This is most clear from single family permits, which are the least volatile measure of the three.

Because of their great volatility, new home sales are best viewed as a 3 month moving average. Here they are only down slightly (644k) from their expansion high one month ago (650k).

Meanwhile, median prices also declined this month, but the increasing trend is intact.

Let's also compare with January's housing permits (red) and starts (green) for all types of housing:

Here again the pause for most of 2017 with the recent new expansion highs are plainly visible.

Going forward, I certainly expect the recent spike in interest rates to again take a bite out of sales as, sooner or later, will increased prices. As in 2014 and 2017, it will be a few months before it shows up in this data.  But for now, despite the downside new home sales number today, the recent positive trend in housing is still intact.
Posted by New Deal democrat at 10:00:00 AM

A "woke" bumper sticker on a redneck pick-up truck 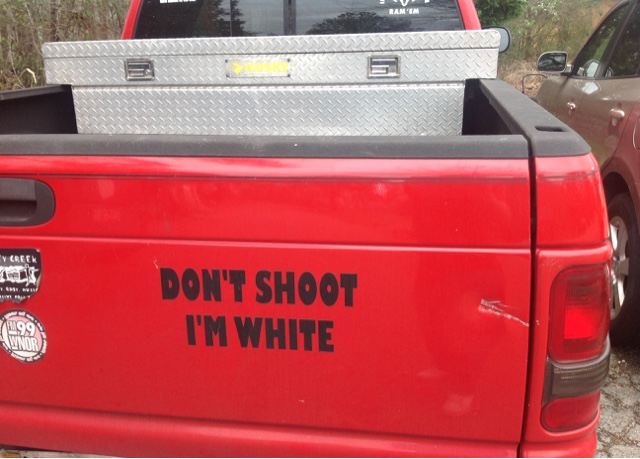