Consumer credit increased 4.4%: the  entire increase is the result of non-revolving credit.  While some of this is most likely for items such as cars and houses, also expect yet another increase in student loan debt to be at least partially responsible.  See this story from Reuters for the implications.

Producer Prices increased .3%.  The reports details were very non-inflationary: core rates didn't increase, while the year over year number came in at 1.4%.

Import prices were tame as well:  Import prices have recorded little change the past 2 months, after decreasing 1.8 percent over the prior 4 months. The recent decline contributed to a 0.4 percent drop in import prices for the year ended in August. The decrease from August 2012 to August 2013 was led by lower nonfuel prices, which more than offset higher fuel prices.

Retail sales increased .2% month over month and 4.7% year over year.  Probably the best news in this report was from the auto sales sector, which continue to show consumers buying cars at solid rates.

Let's look at two charts on the data: 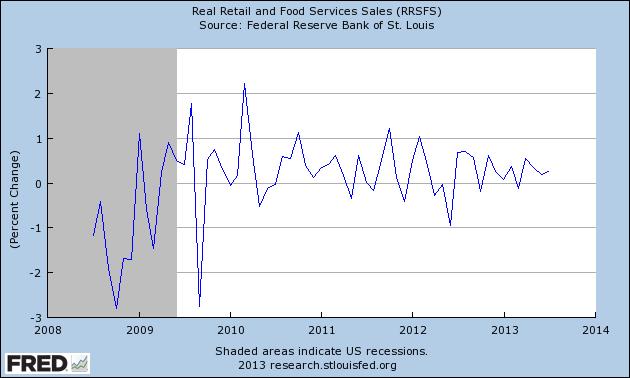 First, the month over month rates of change are not setting any records, but they have been consistently positive, printing between 0% and 1% over the last year-year and a half. 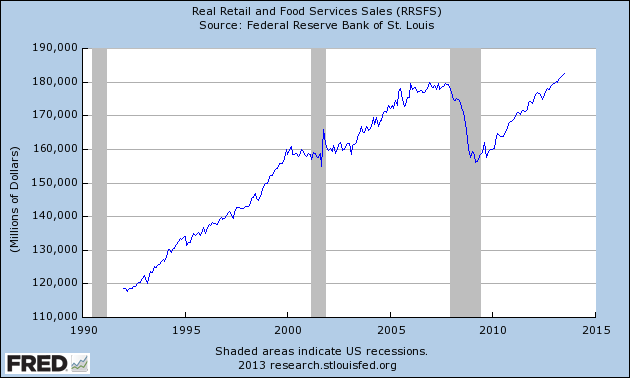 Second, retail sales are now at higher levels than before the expansion.

But for me, this is the best chart from teh real retail sales data: 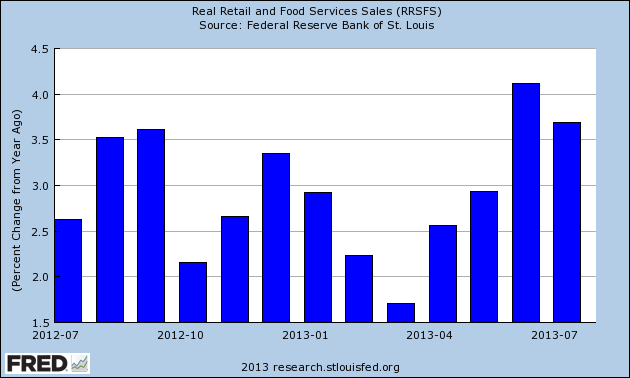 The year over year percentage change in real retail sales has printed between 1.6% and 3.7% over the last 12 months, with most of the readings printing about 2.5%.

NFIB report on small business was more or less unchanged.  However, this report has on an overall basis been very weak for the duration of this expansion.  Here's a chart of the macro level reading: 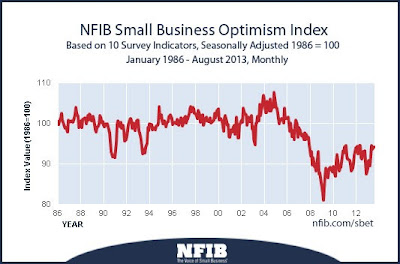 Conclusion: there wasn't enough data this week to draw a major conclusion on the economy.  The good news was prices are clearly contained.  This will allow the Fed to taper their asset purchases as needed or viewed appropriate.  While the NFIB news was disappointing, this is the same result the survey has printed for this expansion.  The best news was retail sales, which continue to show purchasing by consumers at a consistent rate. 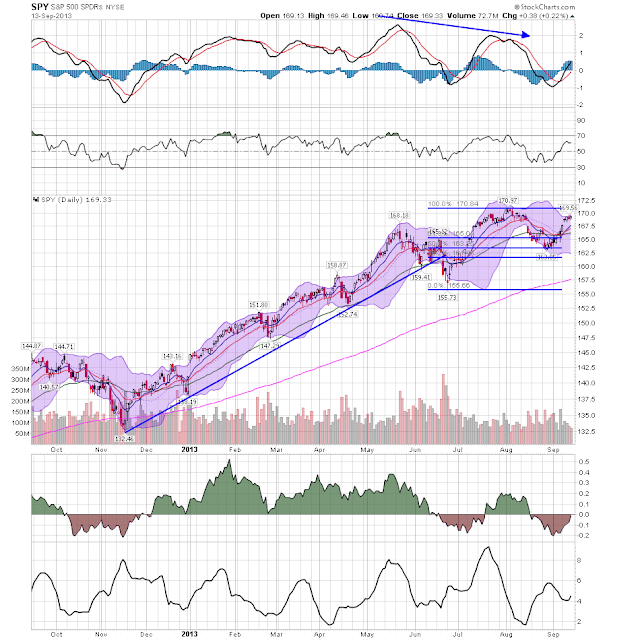 The daily chart still points to an overall consolidation.  Price printed at the 170.97 level in early August, which is the year high.  Last week, prices gapped higher, but their advance stalled in the 169/169.5 area.  Momentum is weakening and volume in flow is neutral at best. 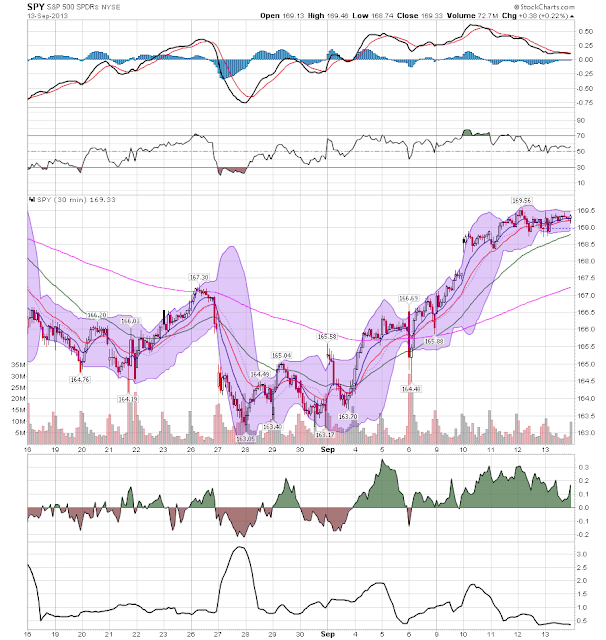 The 30 minute chart puts last week's price action in a bit more detail.  Prices rallied on Monday and gapped higher on Tuesday morning.  But they remained near unchanged for the remainder of the week, stuck in the 169/169.5 area. 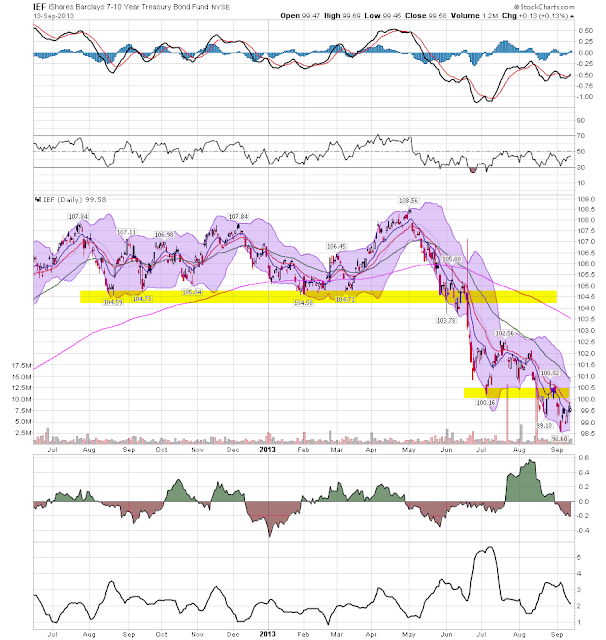 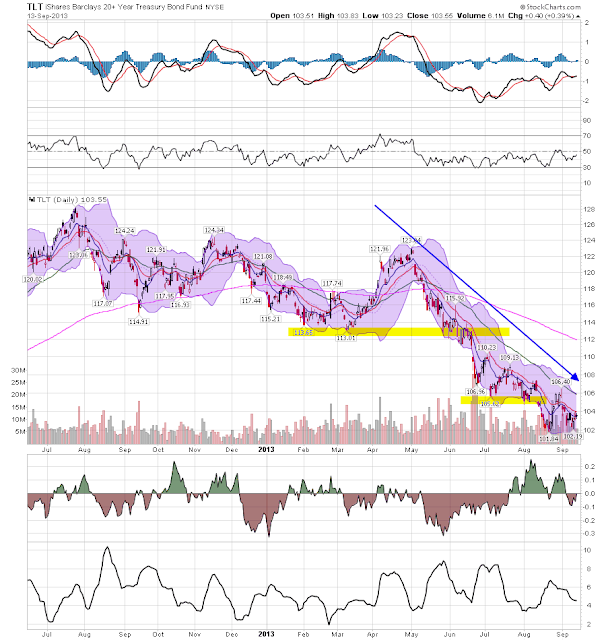 The treasury market is still trying to find a low.  The belly of the curve (the IEFs, top chart) fell through support at the 100 level in mid-August, while the TLTs moved through the 105 level at the same time.  Both markets are now trying to consolidate losses.  The chart indicators are all very negative; all the shorter EMAs are moving lower and prices are using them as resistance.  Both chart have negative momentum and weak volume readings.