Peru Still Attractive As An Investment

Despite the recent Latin American Sell-Off, the region as a whole is still in decent economic shape.  Peru is a prime example of this.  In their most recent policy announcement, the Central Bank of Pery kept rates at 4.25%.  Here is how they described their economy

The Board of the Central Reserve Bank of Peru approved  to maintain the monetary policy reference rate at 4.25 percent.

This decision is based on that economic growth in the country is close to the economy’s potential level of growth, inflation expectations remain anchored within the target range, the rate of inflation has been affected by temporary factors on the side of supply, and international financial conditions are still uncertain, even though some positive signals have been observed in the developed economies.

Let's start with their GDP growth:

Their overall annual growth rate is printing between 4.6% and 6.9% over the last nine months.  We should be so lucky.

And inflation is clearly under control. 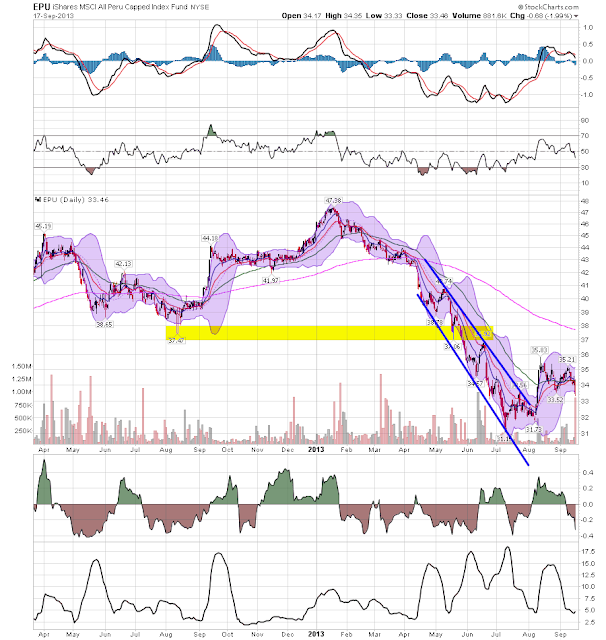 The Peruvian market fell sharply during the late spring and summer, as the market sold-off in reaction to the announcement of the Fed's potential tapering.  However, prices broke out of their channel in early September, rallying through the shorter EMAs.  now prices are weakening a bit, probably to test lows.