The Federal Reserve shocked the world Wednesday with the decision to, well, keep doing what they've been doing for a year now. That is, the central bank is buying $85 billion in bonds every month, and will keep buying $85 billion a month for now.

So the money will keep flowing, the "taper" is postponed for another day, and the stock market is euphoric. But why? One reason is that interest rates have risen in global financial markets in the past few months, in part due to Fed signaling about the taper, which may slow growth. But for another key answer, walk out the front door of the Fed's headquarters on Constitution Avenue, turn left, and walk 20 blocks until you run into the United States Capitol.

And indeed, Ben and the Fed went on to blame Congress.  First, they noted, "Household spending and business fixed investment advanced, and the housing sector has been strengthening, but mortgage rates have risen further and fiscal policy is restraining economic growth."  And that is exactly what we've seen, as shown by this chart from the BEA: 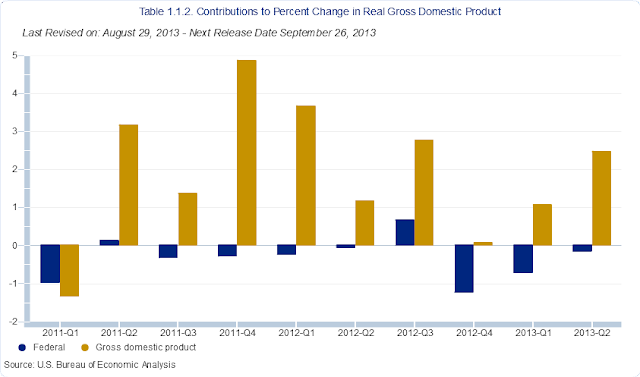 Over the last 10 quarters, government spending has subtracted from growth in all but two quarters.

The Fed goes on to say:

Taking into account the extent of federal fiscal retrenchment, the Committee sees the improvement in economic activity and labor market conditions since it began its asset purchase program a year ago as consistent with growing underlying strength in the broader economy.

Here's the bottom line: Washington and its constant shenanigans are detracting from overall growth.  It's that simple.