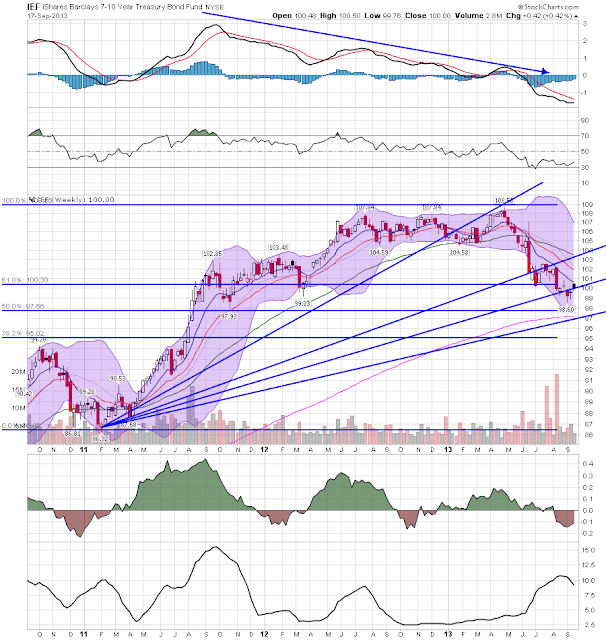 The above chart shows that the belly of the curve (7-10 year treasuries) have been selling off since the mid-spring.  Prices for the ETF have dropped from 108 to 100, leading to a rise in interest rates.  Overall, we're seeing a large sell-off from foreign investors:


Worries over the end of the Federal Reserve’s bond-buying programme spurred foreign investors to sell US Treasuries at the fastest pace on record in June.
Figures released from the Treasury on Thursday showed that outflows of longer-term US securities, which include government debt as well as equities, reached $66.9bn in June. Foreign investors sold $40.8bn worth of Treasury bonds, the highest monthly sell-off on record, according to data from the so-called “TIC report”.

Here is a chart of the 10-year treasury rate from the St. Louis Fed: 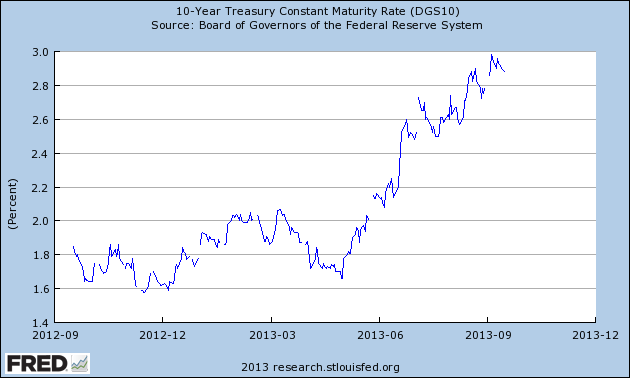 Rates have risen over 100 basis points in the last 6-7 months, which is bleeding through to the mortgage market.  This rate increase is hitting the home buying market:

“While builder confidence is holding at the highest level in nearly eight years, many are reporting some hesitancy on the part of buyers due to the sharp increase in interest rates,” said NAHB Chairman Rick Judson, a home builder from Charlotte, N.C. “Home buyers are adjusting to the fact that, while mortgage rates are still quite favorable on a historic basis, the record lows are probably a thing of the past.”

“Following a solid run up in builder confidence over the past year, we are seeing a pause in the momentum as consumers wait to see where interest rates settle and as the headwinds of tight credit, shrinking supplies of lots for development and increasing labor costs continue,” noted NAHB Chief Economist David Crowe.
Posted by Unknown at 7:29:00 AM