The last five years have not been kind to conservative economic thought.

First,  inflation has in fact been very tame despite the numerous prognostications from conservative pundits about how the Fed's stimulus would lead to Weimer Republic style inflation.  Art Laffer made this bold prediction in the WSJ on June 11, 2009; other conservatives jumped on the hyper inflation bandwagon (and some are still holding onto the theory).  Unfortunately, inflation has not born out their predictions.  In fact, it's been very tame: 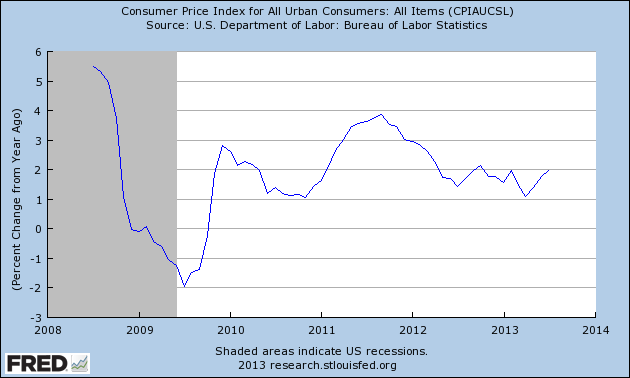 And then there is the uncertainty trope.  There was an argument floating around that legislative changes were causing so much uncertainty that businesses were frozen in place.  This is a patently ridiculous argument on the surface as the future is always uncertain.  Following the logic to its natural conclusion,  every two years the US' political climate would essentially prevent businesses from doing anything as a result of the House's election cycle.  Someone went to far as to construct an "uncertainty index" to show that this was in fact a real phenomena.  Mike Konczal over the the Next New Deal has shown that not only is the uncertainty index bunk, it's also at low levels right now meaning uncertainly isn't holding us back.

And finally there's the austerity argument.  First, the intellectual backing of this argument -- the Reinhart and Rogoff paper -- was shown to have a spreadsheet coding error that cast doubts over their conclusions.  And then the IMF issued a paper showing that austerity was in fact a mis-guided policy.  And finally there were the actual results that showed growth did not result from austerity policies; in fact, economies shrank when they were implemented.

As professor Krugman has repeatedly pointed out, the real solution to this recession would have been a massive stimulus from the government to stimulate short-term demand.  While this would have resulted in increased debt in the short-run, it would also have led to increased growth which would have stabilized and then lowered the debt/GDP ratio over a 5-10 year period.  As I've pointed out, the logical step would have been a massive infrastructure build which would have put most of the blue collar unemployed to work and solved the problem of our crumbling infrastructure.

This is hardly a revolutionary concept; a simple reading of the Paul Samuelson economics text would have led to the same conclusion.  But that involves the government, which is so anathema to some people that they will (and have) cut off their economic nose to spite their face.

However, what's really important here is this: conservative economic thought (think University of Chicago and the like) has been dead wrong in their predictions for the last five years.  And not just slightly off, but 100% wrong.  Think about that track record the next time they start to talk about the future.
Posted by Unknown at 11:30:00 AM