Let's start with with this chart of overall Australian GDP:

The annual growth rate peaked at 4.3% five quarters ago and has been falling ever since.  Remember that ultimately Australia is going through a re-balancing; as China reorients its economy to one driven more by consumer demand rather than export growth, countries that sent raw materials to China's manufacturers will also see slower growth.  Australia has been a prime economic beneficiary of China's boom and is therefore having to readjust.

First note that interest rates in Australia are still quite high relative to other countries.  The RBA of Australia lowered interest rates last Spring to 2.75% in an attempt to increase growth, but they still have a great deal of room overall (they lowered rates to 2.5% which is not reflected on this chart).

From the latest central bank minutes:

The national accounts for the March quarter were released the day after the June Board meeting and confirmed the Bank's expectation that GDP had continued to grow at a pace a bit below trend in recent quarters. Members noted that consumption was weaker than had been implied by the relatively strong pick-up in retail sales in the March quarter, while business investment declined and dwelling investment was flat. Exports increased further in the quarter, particularly resources, while imports fell sharply in line with the decline in mining investment.

This has been the case with Australia for the last year: below trend growth.  This is to be expected as the economy reorients itself.

Survey-based measures of business conditions improved in May, but were still a little below long-run average levels. Over the past few months, measures of sentiment had improved for some industries, including construction and business services, and declined slightly for other industries, most notably mining and manufacturing. While the volume of resources exports had risen further, and was expected to continue to grow with the addition of new capacity for bulk commodities, the decline in commodity prices over the past year or so had weighed on the resources sector. Members noted that while mining investment remained at a high level, planning and development work related to future projects had declined significantly since the previous year. Even so, given the considerable volume of firmly committed work, mining investment was likely to remain high for some quarters.

Members were briefed that the Bank's liaison suggested that the near-term outlook for non-mining business investment remained modest, in line with a range of other indicators and survey measures. At the same time, however, the depreciation of the exchange rate over the past two months was expected to provide more supportive conditions for the tradable sector.

Labour market conditions remained somewhat subdued. While changes in employment had been volatile from month to month, year-ended growth, at a little over 1 per cent, continued to be below population growth. Overall, unemployment had been on a gradual upward trend over the past year or so, even though the unemployment rate ticked down to 5.5 per cent in May. Average hours worked declined further in May and were at a two-year low. Over the past few months, employment growth had been strongest in New South Wales and South Australia. Employment had been flat to declining in Queensland and Western Australia, consistent with a decline in demand associated with mining-related activity in those states. Forward-looking indicators of labour demand implied only modest growth in employment in the months ahead.

The comments above still point to an economy that is changing its basic composition.  While investment from raw materials firms is still strong, there is a every indication that investment will drop in the near future.  This weakness is bleeding through to other parts of the economy, leading to "modest" growth overall.

The greatest concern is the rising unemployment rate, which has increased from 5.2% last June to 5.7% in the most recent report.  This has led to a moderate reading in consumer confidence, which, while positive, is just barely so. 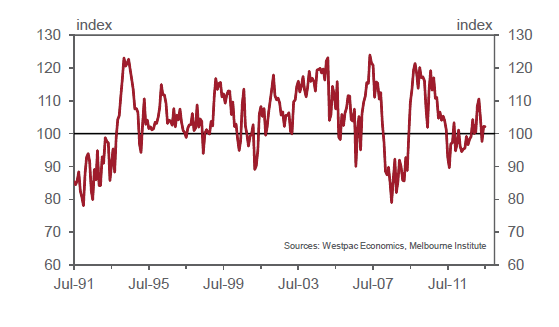 It has also contributed to weaker retail sales over the last 12 months.  These stalled in the 2H12 and have just barely grown over the last three months. 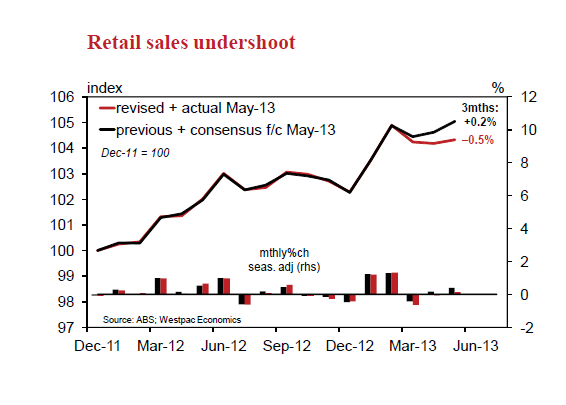 It is this slow pace of economic growth that led the Reserve Bank of Australia to drop interest rates 25 basis points this week:

At its meeting today, the Board decided to lower the cash rate by 25 basis points to 2.5 per cent, effective 7 August 2013.

In Australia, the economy has been growing a bit below trend over the past year. This is expected to continue in the near term as the economy adjusts to lower levels of mining investment. The unemployment rate has edged higher. Recent data confirm that inflation has been consistent with the medium-term target. With growth in labour costs moderating, this is expected to remain the case over the next one to two years, even with the effects of the recent depreciation of the exchange rate.

Let's turn to the Australian ETFs. 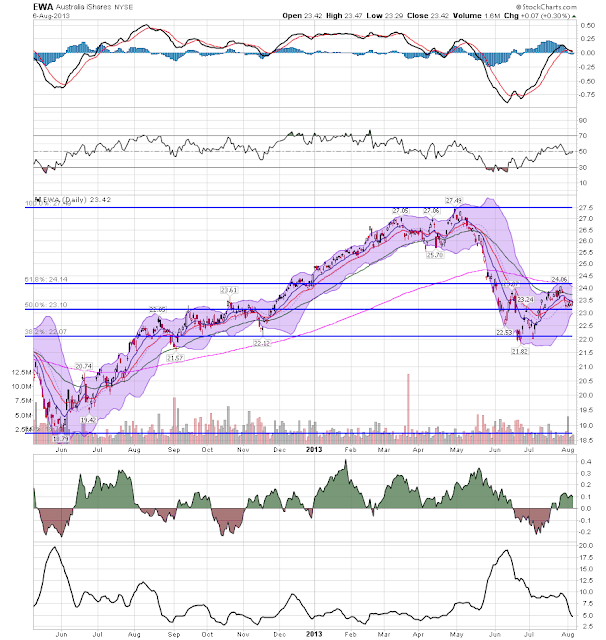 The Australian ETF strating dropping in May, eventually hitting the 38.2% Fib level (from the June-May rally) for support.  Now prices are consolidating between the 38.2% and 61.8% fib level.  The overall magnitude of the drop from peak to trough was a little over 20%.  The move also brought prices below the 200 day EMA. 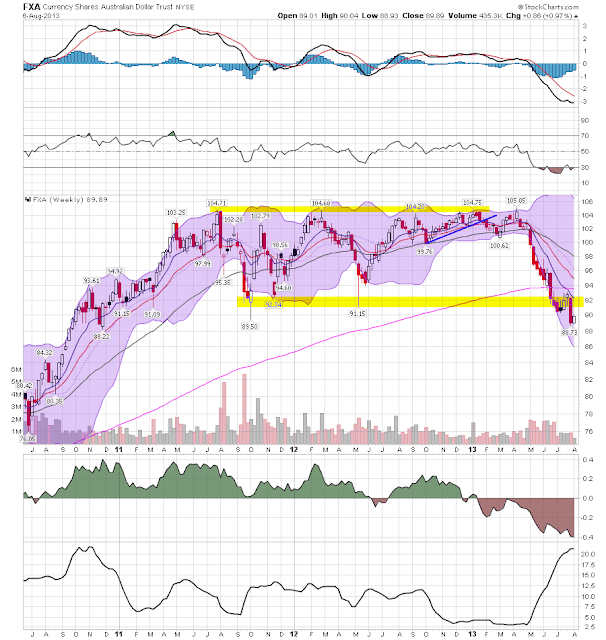 The Australian dollar ETF has also fallen about 17% and is currently right below key long-term support levels.  Prices are also below the 200 week EMA with all the shorter EMAs moving lower.  The underlying technicals are also weak, with a negative MACD and CMF reading.

Going forward, there is little to suggest a pick-up in economic activity.  The real threat to the economy is from the downside as the re-balancing weighs on growth.