First, thanks to NDD for covering the employment report on Friday.  I want to add my inflation-adjusted two cents to the conversation.

As I noted last week, the overall employment situation is still weak.  Aside from the leading indicators (which are strong) confidence is low, employers are tentative in their actions and the labor force is horribly underutilized.

This report adds to the overall impression that we are still in an economic malaise.

First we have the downward revisions for the preceding two months, totaling 26,000.  While this is not a vast amount of people, it is still a downward move, which is never good news.

The decrease in hours and pay is also troubling.  Some of this is to be expected as the economy is expanding so slowly as to indicate fairly depressed overall demand. Also adding downward pressure to wages is the still high unemployment rate, indicating employees just don't have much negotiating leverage.

Let's look at some inner details of US employment growth since the end of the recession: 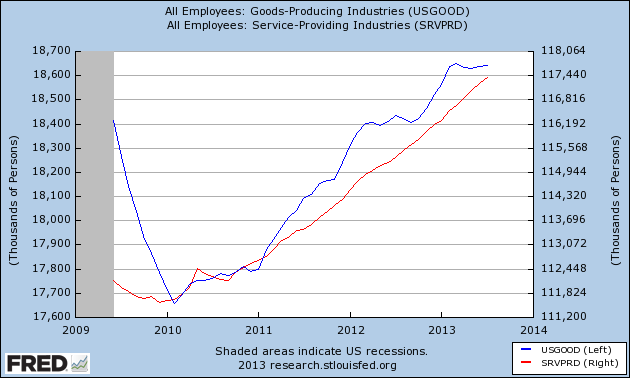 The above graph shows goods producing (with a left side scale) and service jobs  (with the right side scale).  Notice the overall of trajectory of both has been more or less the same, that is, if we were the measure the slope of both the numbers would be pretty close.  There is a vast difference in the actual amount of the increases; the goods producing has added about 900,000 while the service sector has added about 5.6 million jobs.  This shouldn't be surprising, as the manufacturing sector is now far more automated, thereby needing few workers. 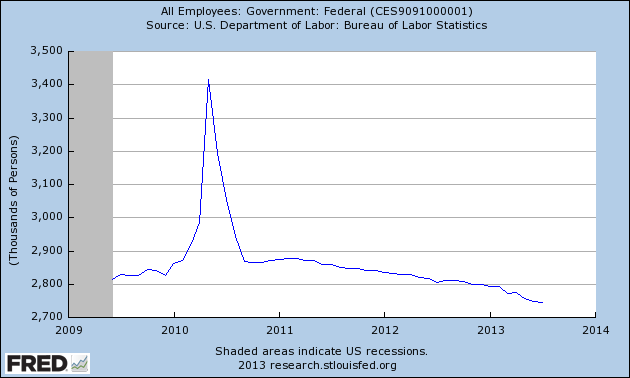 Total Federal employees have decreased from a little over 2.8 million to about 2.75 million. 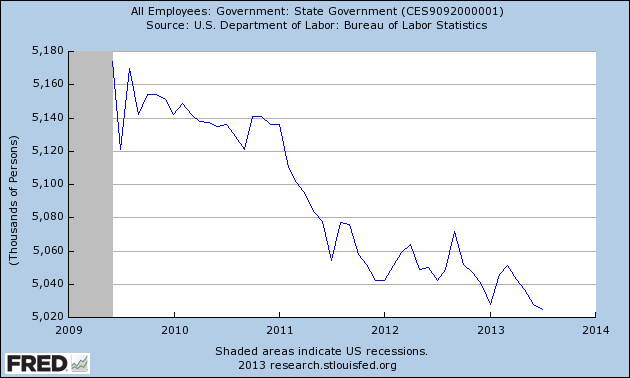 State government employment has also dropped from about 5.140 million to 5.040 million. 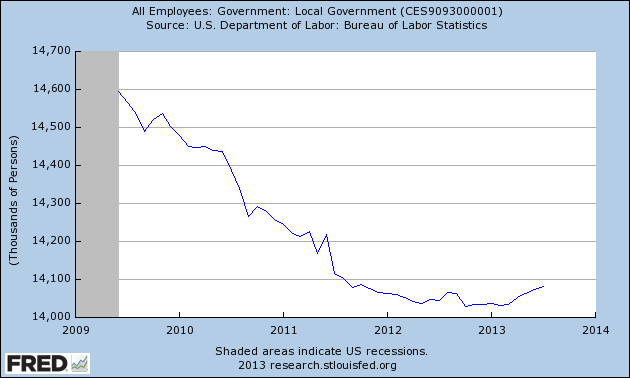 The biggest drop in government employment has occurred at the local level, where we've seen a loss of about 500,000 jobs.

Put in a different way, the shedding of government jobs has been a big reason for the drop in employment during this recession

Finally, what most concerns me is the lack of any concern for this situation on the part of policymakers.  There is simply no effort to do a single ting to increase jobs in a meaningful way.