Seniors in the workforce: it's primarily about longevity, not DOOM

One of the latest Doomer arguments is that the increase in people age 65 and over in the workforce proves that retirement age workers are under great stress. There is a significant element of truth to this: as we'll see below, there is evidence of that stress in the data. Indeed, I personally know of a number of older workers who would have very much liked to be retired by now, but haven't because their plans took a huge hit in the great recession. Others are still employed because they and/or their spouse isn't yet eligible for Medicare, and so they are working strictly for the medical insurance.

But in my discussions with these people, once I scratch beneath the surface I also find that there is another dynamic: many will admit that they actually could retire if they wanted to, but want to hit a particular financial target, and it is simply hard as a psychological matter to step away permanently from the continuing income. Furthermore, they are healthy, their work is intellectually engaging, it is a means by which to interact socially with people all day long, and it keeps them from being with their spouse 24/7 and the discord that frequently results.

In short, they continue to work because they can.

Usually, when the Doomer argument about older people working is trotted out, it is accompanied by graphs that start at about the onset of the great recession, showing how there has been a marked increase in those 65+ still in the workforce. While unfortunately a lot of the data about those 65+ in the workforce only begins in the last 5 or so years, there's enough longer term data to debunk the argument that the great recession is the cause, or at least the primary cause, for the increase. I should emphasize that there's no "smoking gun," but the data looks persuasive.

Let's start with a graph of those employed at age 55 and over. This data series goes back over 60 years: 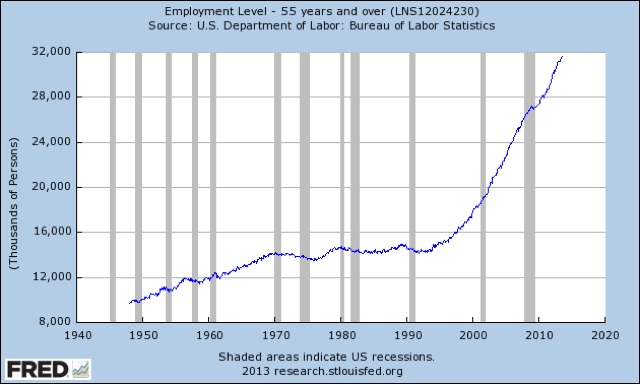 Note that the first Boomer didn't hit age 55 until the year 2000, and yet the big increase in the trend started over half a decade before then. Since the big upturn started in the early 1990's, the number of those 55 and over in the workforce has more than doubled. And it includes the era of the tech boom in the late 1990's so it certainly wasn't about financial privation then.

Another set of data from the Census Bureau that goes back to the 1980's, breaks down the workforce by age over 55. If a person is continuing to work after 65 due to financial setbacks, then as time goes on we would expect an increasing percentage of those people to retire as they finally make their target, at age 67, or 70, or 72.

Instead, the opposite is the case. All of those participation rates started to rise before 1990, but the relatively younger cohorts started first. Here's what has happened since (h/t Doug Short): 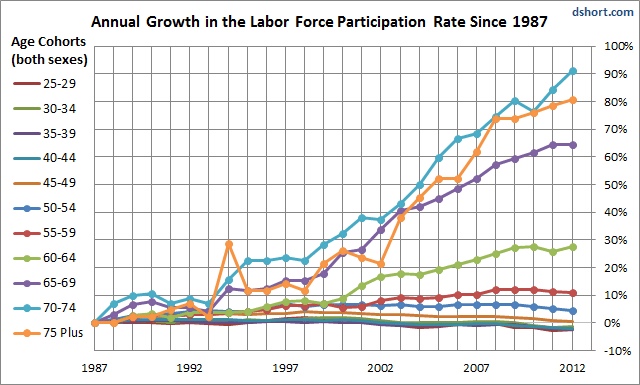 Almost perfectly, the older the 5 year cohort, the bigger the percentage increase in the participation rate (if we measured from the mid 1990's, when the over 75 cohort first started to meaningfully grow, that would show much higher relative growth than any other group). This is the opposite of people finally hitting their financial target and retiring. While there is no smoking gun, this certainly appears to support that thesis that the primary driver is improved healthy longevity.

Finally, if the over 65 age contingent is increasing primarily because of an increase in healthy life expectancy, we would expect to see that the participation of people with no disability is increasing more than that of people with a disability. On the other hand, if privation were not an issue, then we might not see any increase at all among those over 65 with a disability continuing to work (some might still work for social reasons). If the two increase at similar rates, that would suggest that financial privation is the primary driver. So if we could break down what percentage of people over 65 are working with or without a disability, that should give us a good indication how much of the increase is because of financial privation, and how much is due to increased healthy longevity.

And as it happens, the BLS does exactly that, although unfortunately the data only begins during the great recession, so it is not as persuasive as it might otherwise be, because we don't have any "control" period. Here it is (normed to zero for comparison purposes at the recession bottom, which does not affect the slope at all. Also, since the data is not seasonally adjusted and is noisy month over month, I have averaged it quarterly): 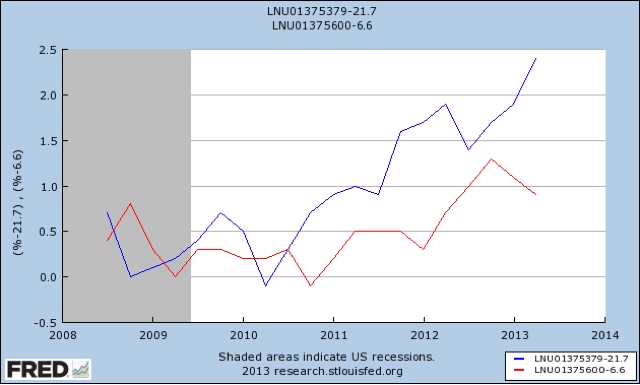 The graph shows that, through June 2013, the percentage of people working at over age 65, even with a disability, has increased by about 1%. But the percentage of workers over age 65 without a disability has increased by about 2%. This is more evidence that while there has been an increase in older workers in the workforce due to financial setbacks, the primary driver is longevity.