Market/Economic Analysis: US; A Mixed Bag Of News

Let's start by looking at the economic news from last week;

Texas manufacturing continued to expand, albeit at a slower pace:

Texas factory activity continued to expand in July, according to business executives responding to the Texas Manufacturing Outlook Survey. The production index, a key measure of state manufacturing conditions, fell from 17.1 to 11.4, suggesting output growth continued but at a slower pace than in June.

The Case Schiller home price index continued to move higher, as shown in these two charts 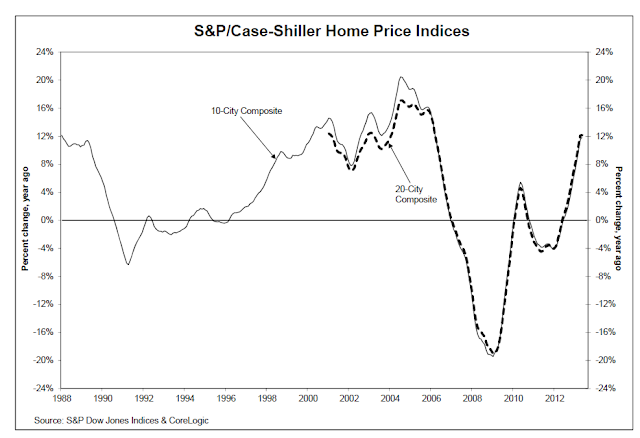 The year over year percentage change continues to move higher, coming in at a 12% clip in the latest reading. 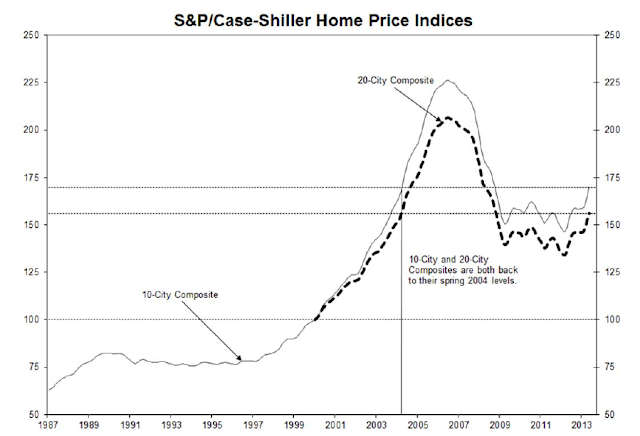 However, the overall level of prices is still contained.

GDP increased 1.7%.  This is a just barely positive number, as overall growth has been weak for the last three quarters.  I'll touch more on this number this week.

While vehicle sales were down 1.8%, they are still coming in at a very strong clip.

The ISM purchasing managers index showed a strong gain.  This was probably the best number to be printed this week:

The employment report was good as it showed an increase of 162,000.  However, the internals were not encouraging.  Now, this could have simply been a bad month, as this data series is very noisy.  But there were enough question marks in the report to raise some red flags.

Consumer confidence dropped a touch, moving from 82.1 to 80.3.  I'm placing this reading in the neutral column not only for the drop, but because of the very low historical reading this data series has displayed for the duration of the expansion. 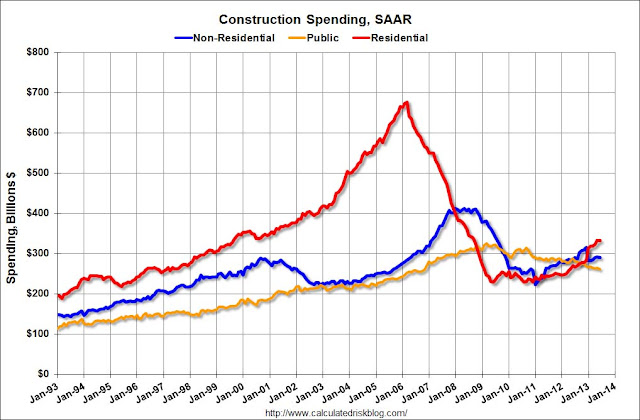 Real disposable personal income decreased .1% in June.  This number has grown at weak levels for the last three months coming in at .2% in April and .2% in May.  At some point we need this number to improve in order to increase PCEs and provide consumers with the fuel they need to continue buying "stuff."

Conclusion: For obvious reasons, the employment report was the big attention grabber last week, raising questions about the health of the recovery.  Adding to the concern was the weak reading in DPI, the third straight quarter of very weak GDP growth, and the low level of construction spending.  But on the good side, US manufacturing printed a very strong number, which may be a harbinger of better numbers in the third quarter.  Also note that auto sales are still strong, proving the US consumer is still resilient. 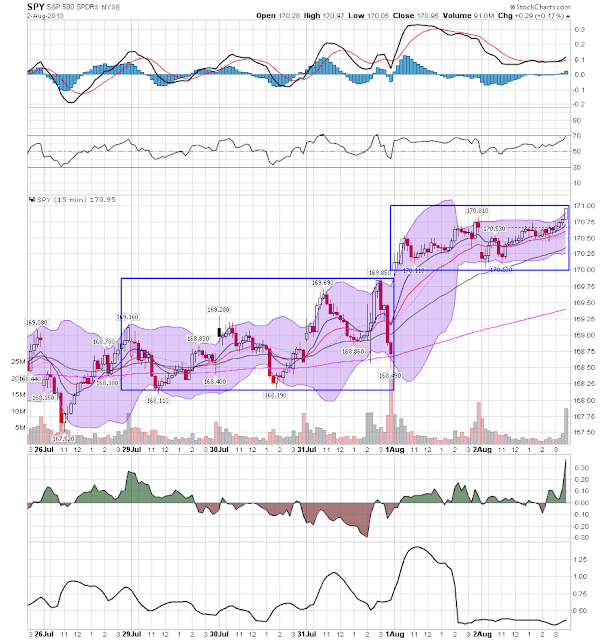 Last week's SPYs were really the tale of two different trading ranges.  On Monday-Wednesday prices traded between a range 168-170, while on Thursday and Friday prices inched higher and traded between 170 and 171. 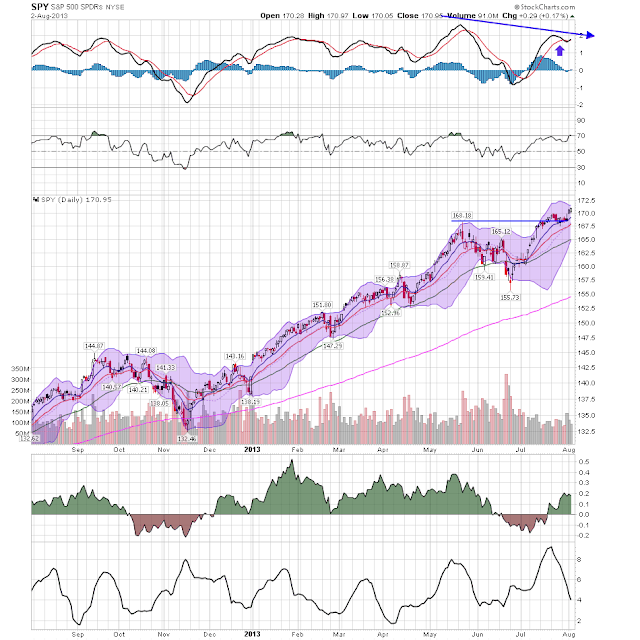 On the daily chart prices continue to move higher, although on weaker volume.  This is to be expected in August.  Also note the declining volatility and weakening MACD reading. 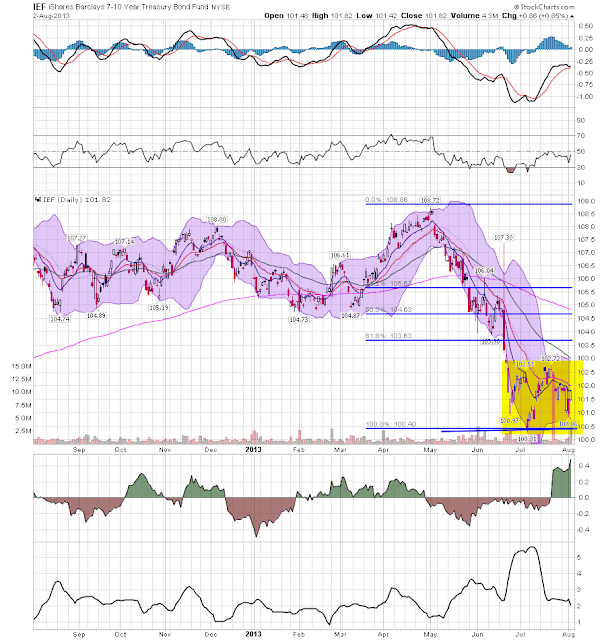 The IEFs are still consolidating after the post Fed tapering announcement.  The 100-103 level still holds for the recent consolidation range. 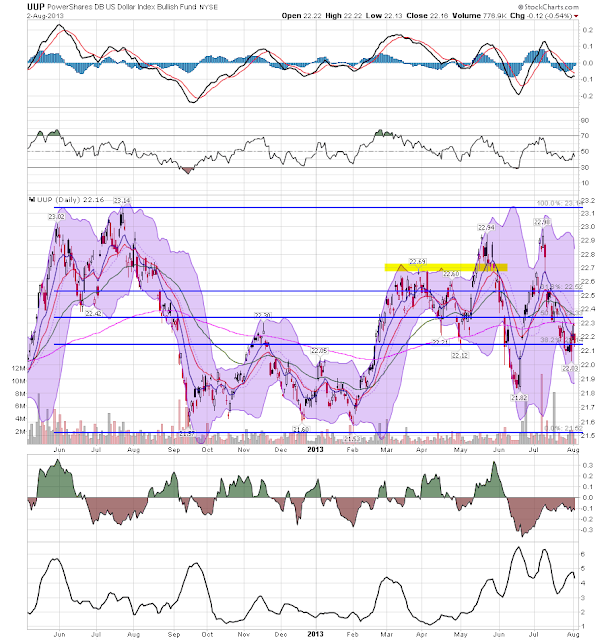 The dollar is still trading in a range.

The week ahead: we're entering the first full week of August, so barring a cataclysmic economic development, I'm not expecting much to happen.