Will the Second Half Print Strong Growth?

There's a lot of very conflicting information on the US economy right now.  On the negative side we have the sequester and the potential for yet another government shutdown or threat thereof.  Wage growth is weak, higher interest rates are hurting the housing recovery and the employment situation is marginal at best.

But two reports last week hint at a far stronger economic environment in the second half.  Let's start with the ISM manufacturing report.

What is particularly encouraging here are the internals; new orders jumped 6.4 points and the overall production index increased 11.6 points.  Usually these numbers increase in far smaller increments. Also of importance is the fact that 13 of 18 industries are reporting an higher activity.  Let's take a look at the anecdotal comments from the report:
The vast majority of the comments are positive; only computer and electronic parts, transportation equipment and chemical products are slow.

Here's a graph of the overall data: 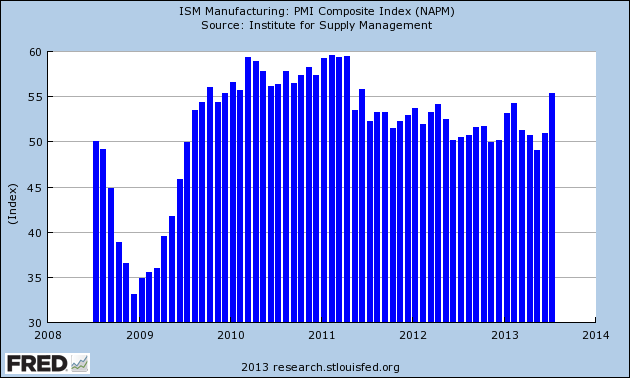 The chart above shows the overall trend for manufacturing was decreasing for about a year, with several recent readings below the 50 line the delineates between expansion and contraction.  However, the latest reading is incredibly strong relative to the recent trend.

Let's turn to the services index:

As with the manufacturing index, we see large increases in the internals with large jumps in overall activity and new orders.  Employment did drop, but it was still in positive territory.  And the breadth of the increase is impressive with 16 industries reporting growth.

Let's turn to the anecdotal part of the report:
As with the manufacturing report, the overall tenor of most comments is positive. We see a negative contribution from political and regulatory developments along with concerns related specifically to the hotel and restaurant industry.

Here's a graph of the data: 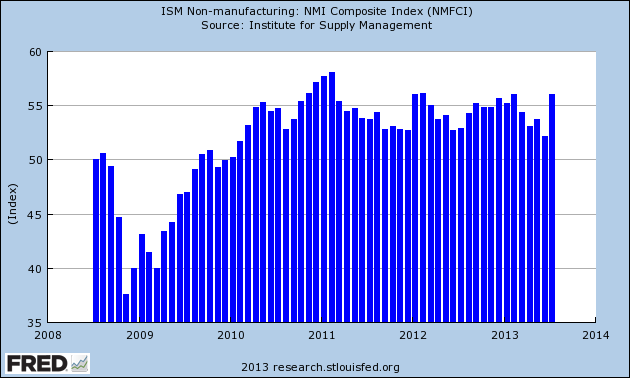 The service industry has been far steadier over the last few years, consistently printing numbers above 50 with little indication of a move into contraction.  However, the latest print is very strong.

Let's combine the above information with this statement from Dr. Ed:

My “Second Recovery” scenario is playing out nicely this year as rising auto and new home sales boost manufacturing and the overall economy. Railcar loadings of motor vehicles rose to another cyclical high in mid-July. This series is highly correlated with auto sales. The same goes for railcar loadings of lumber and wood products, which is highly correlated with housing starts.

Auto sales numbers have flown below the headlines for the last few years, but the overall pace has been continually increasing: 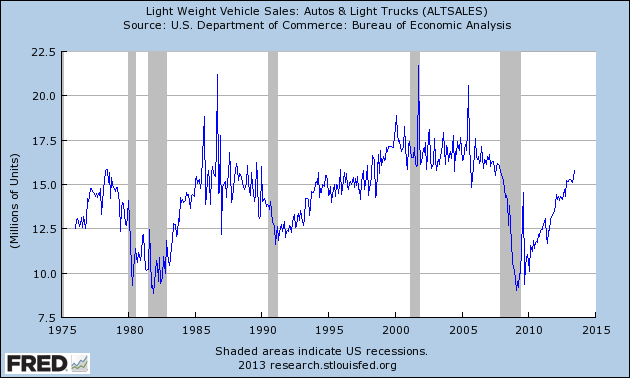 Now auto sales are just below the average level they maintained during the last expansion.

The housing story may be starting to fade as higher interest rates may be slowing sales of both new and existing homes.

In reality, I remain very sanguine about the economy.  Every time it looks like we're about to kick into a higher gear, we see an extraneous event perpetrated by the the Republicans in Congress that hinders growth.  It started with the near default of US debt two years ago followed by the S&P downgrade, was followed by last year's sequester and will probably continue this year with yet more high level conservative budget stupidity.   And while the recent ISM numbers are very encouraging, they are in fact only one month worth of data and need to be understood as just that.  It's just as possible that next month we'll be disappointed with a far weaker than anticipated read.

However, the numbers printed above highlight that -- yet again -- the economy appears to really want to grow faster.  Both primary sectors of the economy are printing strong numbers and auto sales are solid, indicating there is a certain level of consumer confidence in the market.  And while housing may be weakening due to higher interest rates, it's highly doubtful it will crater anytime some.  It's also possible that as the market adjusts to the new "higher" levels, they'll realize they aren't in fact that high and will still attract buyers in the market.  And finally, with the UK mending and the EU probably coming out of recession, it's likely that we'll see a rise in export orders which will obviously help the US economy, albeit it around the fringes.

But, frankly, I'm expecting another round of Washington stupidity after the August recess that will put the kabash on the whole thing.