OK, first things first: my co-blogger Bonddad posted the wrong comparison yesterday in criticizing an article about part-time jobs. It is, in fact, correct that according the household survey that if you measure from the beginning of the year through July, 97% of the net jobs created were part time. But it is an extremely misleading comparison, and especially as it has been used to argue over the longer term data. If Bonddad made a mistake, at least the data he used showed the real trend, and he didn't resort to dishonest, misleading comparisons like the post he was criticizing.

Employment bottomed in December 2009. From that time through the end of 2012, a three year period, according to the household survey, 5,339,000 jobs were created. Of those, 5,299,000 were full time. A grand total of 40,000 were part time. That's not a typo. During the three year period ending last December, on net 99%+ of all jobs created were full time. Here's the graph, comparing the total number of jobs created from the establishment survey (red) with the net full time minus part time jobs number (blue) from the household survey. 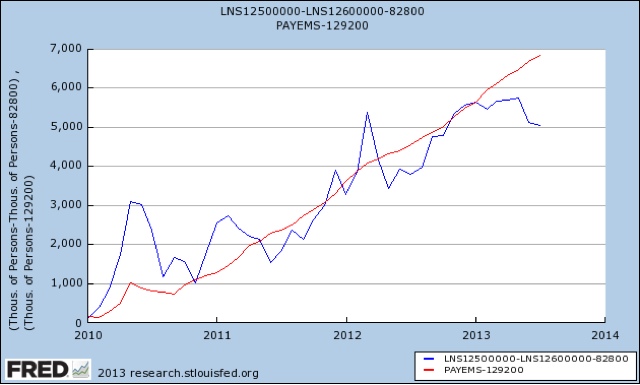 If you don't believe me, the raw data on full time and part time jobs can be found here and here

Through May, there were still many more full time (370,000) than part time (197,000) jobs created in 2013. Then, in June, the bottom dropped out, as 240,000 full time jobs were lost, while 360,000 part time jobs were created. It is entirely because of that one month that full time vs. part time jobs comparison looks so poor measured from the beginning of this year.

Beyond that, even though the household numbers are seasonally adjusted, it looks like there is some unaccounted seasonality still left in the numbers. As you can see in the chart below, there has been a pattern ever since the recession whereby full time jobs ramp up through May, and then decline (or at least decelerate) through August, before rising again. In fact, through August of 2011, full time jobs were actually negative as measured from the first of the year (all numbers in 1,000's):

There is really no significant difference this year from 2010 or 2011. In fact, you could have run the same type of headline, measured from the first of the year, with a negative percentage.

But that still leaves us with understanding why there was a drop in full time jobs but an increase in part time jobs in June of this year. It's at least possible that some businesses cut back employees' hours becuase of the impending deadline for insurance under Obamacare. But on the other hand, we know for sure that a large number of federal employees had their hours cut from full time to part time because of the Sequester. The first estimate of these cutbacks was in the neighborhood of 100,000, but Spencer England of Angry Bear has calculated that the Sequester-related cutbacks in the hours of federal employees may have been responsible for all of the losses in full time jobs, and gain in part time jobs, for June.

I'd be remiss if I didn't address several egregiously misleading claims being made about part time jobs. In particular, the Hot Air article by Ed Morrissey criticized by Bonddad yeterday reprints the below graph that Chris Conover of Forbes used to support his claims: 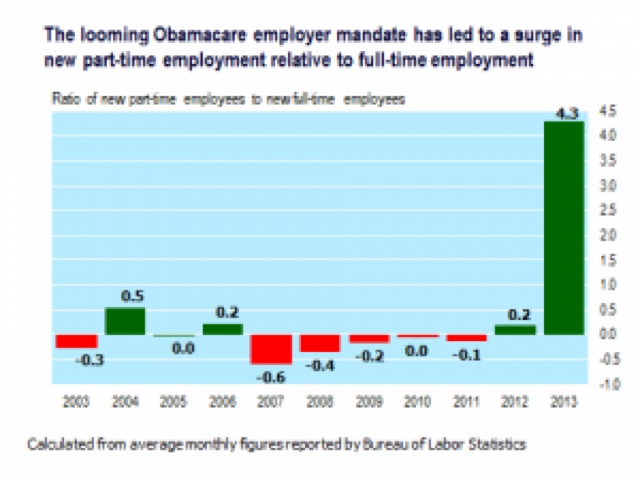 Because the monthly Current Population Survey are so volatile, it is easier to see what is going on by calculating an average monthly figure for each calendar year to get a sense of whether the number of PT or FT is rising or falling. We only have six months of data for 2013, but this method allows us to compare the average monthly count for the year to date with the average monthly count from prior years on an apples-to-apples basis. We can then calculate the ratio of new PT workers in an average month to new FT workers in an average month. Obviously this ratio will turn negative in years that either FT or PT workers have declined on average. So over the past decade, there’s only 4 other years with which to compare the 2013 experience.

In fact, the graph is as misleading as could be. It compares the full years up through 2012 with the first 6 months of 2013. It then dismisses the negative comparisons from the recession years and even 2010 through 2012 I've discussed above as "not applicable."

There is, in fact, an easy way to do a YoY comparison right up to this month that really is an apples-to-apples comparison, and that is to measure July to July. When we do that, look what happens (again, all numbers in 1,000's):

Ultimately, Morrissey/Conover cite the above "evidence" to support their preposterous claim that

[T]here seem to be a lot of people arguing that Obamacare has little or nothing to do with the rise in part-time employment... but if we systematically review the available empirical evidence in an even-handed fashion, the conclusion seems inescapable: Obamacare is accelerating a disturbing trend towards “a nation of part-timers.” This is not good news for America.

Not only does the actual trend refute their claims, but since Obamacare was passed in Summer 2010, unless Obama had a wayback machine with which to scare businesspeople, it couldn't possibly have been responsible for the 3,076,000 rise in part time jobs from October 2007 until July 2009. That was mainly on George W. Bush's watch.
Posted by New Deal democrat at 9:00:00 AM