Yes the Sequester and Federal Policy Is Hurting Growth

Let's review some basic economics.  The GDP equation is C+I+X+G=GDP, where C=consumer spending, I=investment, X=net exports and G=government spending.  Therefore, according to basic math government spending is a component and a necessary component to the economy.  And no, it's not a call for a return to a totalitarian state economy where all decisions are handed down in a 1970s style Soviet state.  But it is a simple acknowledgement that government policy can and usually does play a positive role in economic development.

GDP growth has fallen well below 2% in the last three quarters.   But I think we know the reason for that:  dysfunctional fiscal policy.  Washington has been the obstacle to a normal robust recovery, through a combination of such factors as spending cuts since 2011, the expiration of the payroll tax holiday in January 2013, the sequester in March, and now business uncertainty arising from new time-bombs in the next two months, once again the needless result of partisan deadlock over passing a budget and raising the debt ceiling.  Given all that, it is surprising that private consumption and investment have held up as well as they have. 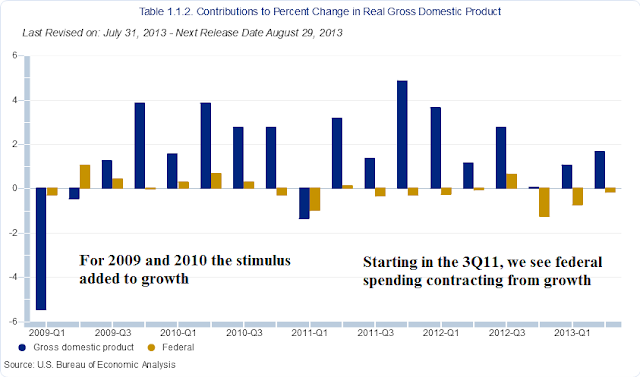 As the chart above shows, government spending added to growth in 2009 and 2010.  While some will may note the contribution was small, it's important to remember that the actual amount of the stimulus was in fact small; of the $800 billion total , approximately half was tax cuts while the other half was actual spending increases.  In fact, the stimulus was in fact too small given the size of the contraction.  Professor Krugman:

In practice, it was even worse, because one of the key elements of the plan — aid to state and local governments — was cut back sharply in the Senate. We ended up with only about $600 billion of real stimulus over that two-year period.

So this wasn’t a test of fiscal stimulus, even though it has played out that way in the political arena: the whole thing was obviously underpowered from the start.

Let's fast forward to 3Q11 when we start to see incredibly stupid budget shenanigans occur in Washington followed by the implementation of the sequester in 4Q12.  Notice for these quarters we see the federal government's contribution take away from overall growth.  And as Frankel points out, for the last three quarters the real effects of the sequester really start to bite in a statistically significant way.