From the latest central bank minutes:


Members noted that the news received on domestic activity over the month was consistent with Australian economic growth being below trend in the June quarter.

Indicators of household consumption had suggested continued moderate conditions overall. Motor vehicle sales grew in the June quarter, but had fallen in July. Retail sales data showed that spending was flat in real terms in the June quarter and liaison pointed to only modest growth more recently. Consumer sentiment had declined since earlier in the year to be close to average levels. Overall, the softer run of recent indicators of consumption was consistent with the somewhat subdued conditions in the labour market. The unemployment rate rose a bit further in June, to 5.7 per cent, while trend employment growth had declined a little over the past few months.

Retail sales have been soft the last few months:

And the unemployment rate has been ticking up:

In contrast, conditions in the housing sector had continued to improve. Auction clearance rates remained high and dwelling prices had increased further in recent months. A number of indicators were pointing to a further recovery in dwelling investment, consistent with the low level of interest rates. Residential building approvals, especially for detached housing, had increased in the June quarter and loan approvals were at their highest level in over three years.

The total number of dwelling unit commitments is increasing

Members did, nevertheless, note that dwelling investment had thus far experienced a muted recovery relative to past cyclical upturns.
Survey measures of business conditions had remained below average and members noted an apparent reluctance on the part of businesses to take on new risks. Non-mining business investment remained subdued and a range of indicators suggested that this was likely to persist in the near term. Mining investment had been at a high level although it looked set to decline over coming years. Consistent with this, imports of capital goods had declined from the high levels in the previous year.

Conclusion: overall, this is an economy that is clearly slowing.  There are no signs of a hard landing, but instead continued weak growth.

Let's take a look at the Australian ETF 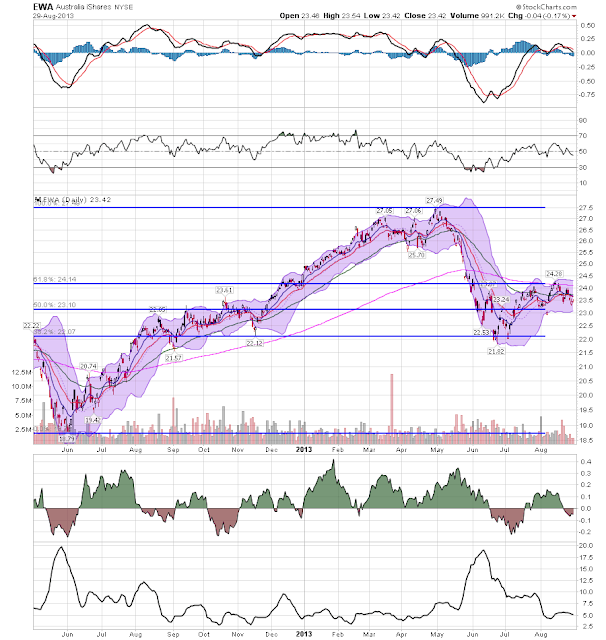 At the beginning of March, we see a sell-off that takes prices all the way down to the 61.8% Fib level, or a loss of about 20% from peak to trough.  Since then, prices have rebounded, trading between the 61.8% and 38.2% Fib level.  Also note the upward resistance provided by the 200 day EMA, indicating we're probably in a bear market. 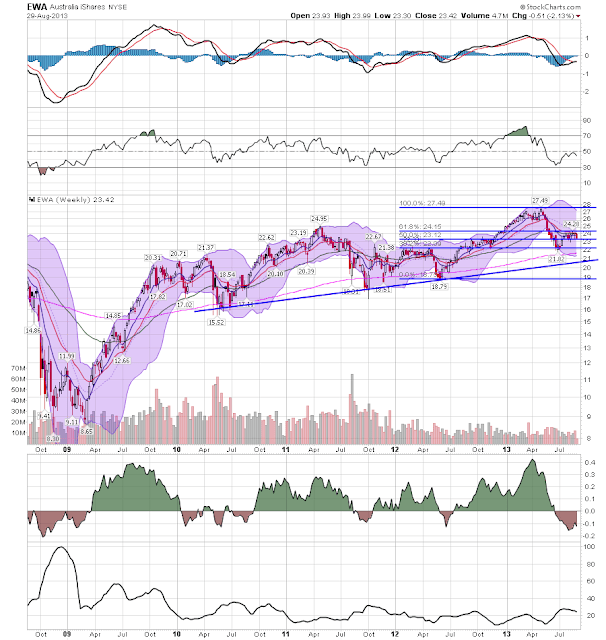 But the weekly chart shows the most recent sell-off has not made a significant dent in the long-term trend of the ETF, which is still up.  This tells us that traders (at least so far) see a slowdown and overall economic re-balancing rather than an outright contraction. 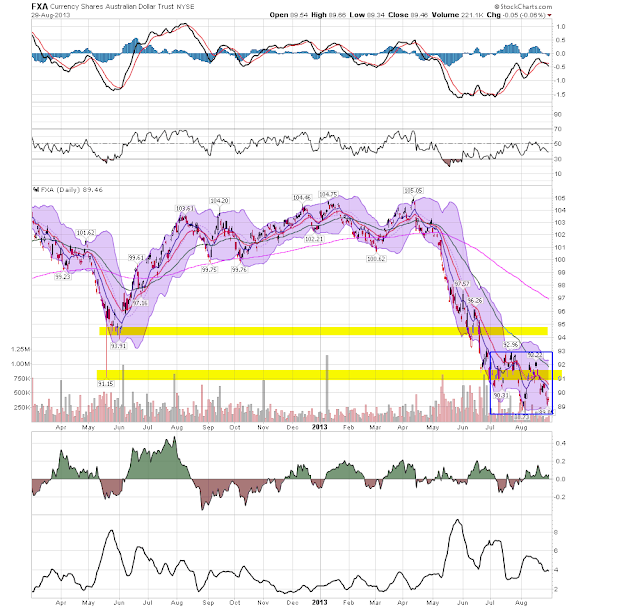 The Australian dollar started to drop in April as the Reserve Bank of Australia started to cut rates.  Overall, the currency has fallen about 15% from peak to trough.  Prices have fallen through two key support areas (one an ~94 and the second at ~91) and are now consolidating losses by trading between ~89 and ~93.