With the release of personal income and spending this morning, we now have all four primary coincident indicators of the economy through July. With the exception of payrolls, they all stalled, with industrial production, real retail sales, and real personal income coming in at zero (actually, within +/-0.05% of 0%).

Below is a graph of all four of the above coincident indicators for the last year. I have presented it at a scale so that the biggest monthly change of each indicator is set to 1.0 (and I've deleted December and January personal income entirely, which featured an increase and then a decrease of over 5% due to moving income forward into 2012 due to the "fiscal cliff"): 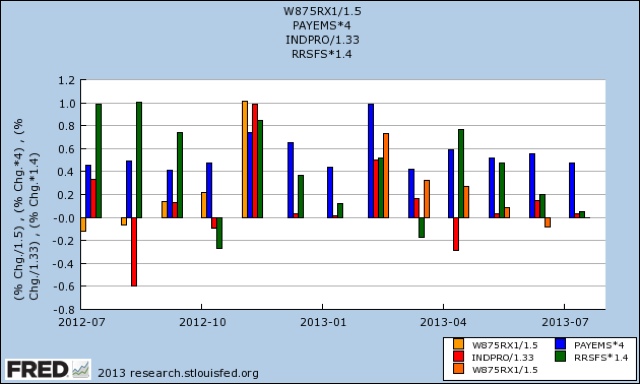 You can see that there has been a distinct tapering off of positive readings in the last three months, and the trend is in decline.

That isn't to say that I expect the decline to continue. If anything, this may be the bottom, if all of the Leading Indices are to be believed. On the other hand, this again shows the negative impact of the Sequester, and certainly suggests that this would be a particularly bad time for fiscal shenanigans in Washington. Of course, that is asking way too much . . . .
Posted by New Deal democrat at 9:00:00 AM