The release of revisions to second quarter GDP this morning give us our first look at Gross Domestic Income and Corporate Profits after Taxes.

Gross Domestic Income is important because it is the other side of the ledger of GDP. Theoretically, the two should always be equal, but because they are calculated from separate data, there usually is a discrepancy. But more importantly, if there is a divergence between the two, it is more likely for GDP to move towards GDI than the other way around. This morning we learned that 2nd quarter 2013 GDI was up 2.5% at an annualized rate, compared with +2.4% in the first quarter. Here is the most current graph through the first quarter: 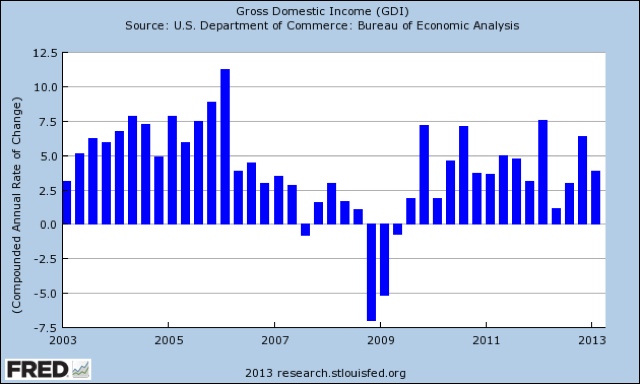 Although this hardly shows strong growth, it also confirms that the economy is still growing, and unlike the initial GDP estimate (also revised upward to +2.5%), it does not show any sign of stalling over the last three quarters.

This morning's release also included corporate profits after taxes and inventory adjustments. This is a long leading indicator. It tends to peak at least a year before the onset of any recession. Although profits declined slightly in the first quarter, as shown in the graph below: 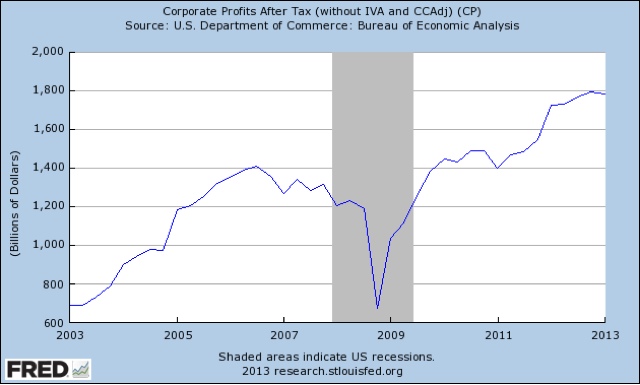 they rebounded strongly in the second quarter to a new record of $1863 billion. Of course, while that may negative recession, it also does nothing to address the glaring inequality between capital and labor's share of income in this country.

The final point is that, while it is welcome that 2nd quarter GDP was revised higher, once again state and federal contributions to GDP were revised lower, and both were outright negative. Federal spending subtracted -1.6% in the second quarter while state and local spending decreased -0.5%. The total subtraction from all government expenditioures was -0.9%. Sequestration and austerity are having a real and negative impact on the economy.

Consider the following chart, culled from the latest GDP report, that shows the percentage change in exports from the previous quarter: 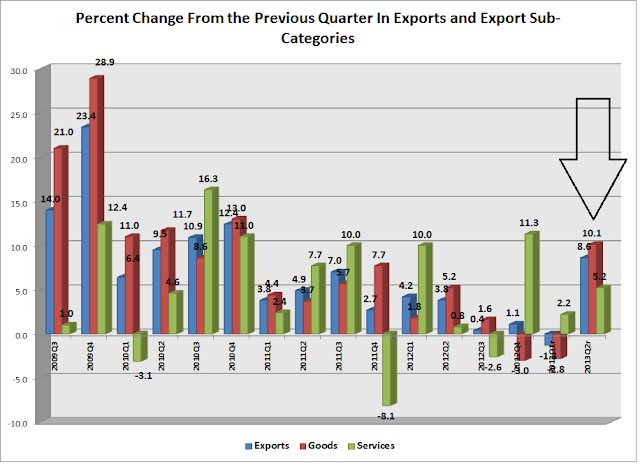 I've drawn an arrow about the latest quarters numbers. Total exports increase 8.6%; shipment of goods increase 10.1% -- the strongest jump since 4Q210.  And the export of services increase 5.2%.  The increase in exports were a primary reason for the upward revision in US GDP:

Recent Census data shows there was a drop in exports at the beginning of the 2Q, but that most categories of exports have increased since April: 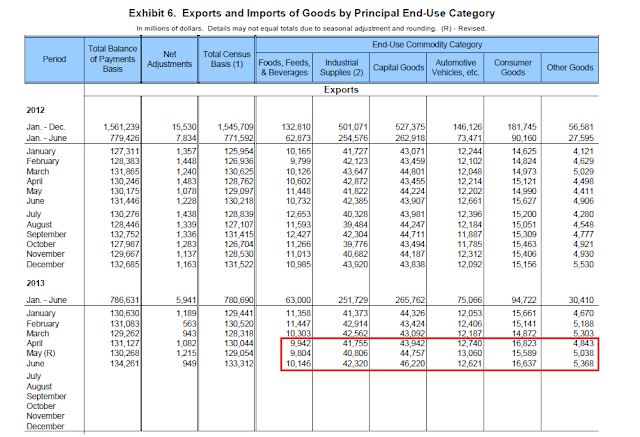