Over the last few months, India's problems have come home to roost.  Their growth has dropped as the result of a bloated domestic government and rather draconian foreign investment rules.  Their current account relative to GDP is large with little sign of getting smaller and inflation is still at uncomfortable levels, thereby boxing in the central bank.  For more information, see here and here.

And the currency continues to slide:

India’s battered rupee was on track for its worst one-day fall in more than two decades on Wednesday, plunging 3.4 per cent in morning trading to breach Rs68 to the US dollar for the first time in a downbeat reaction to a government plan to rescue the floundering economy.

Here's a chart of the rupee ETF that shows two recent breaks of support (see the blue arrow): 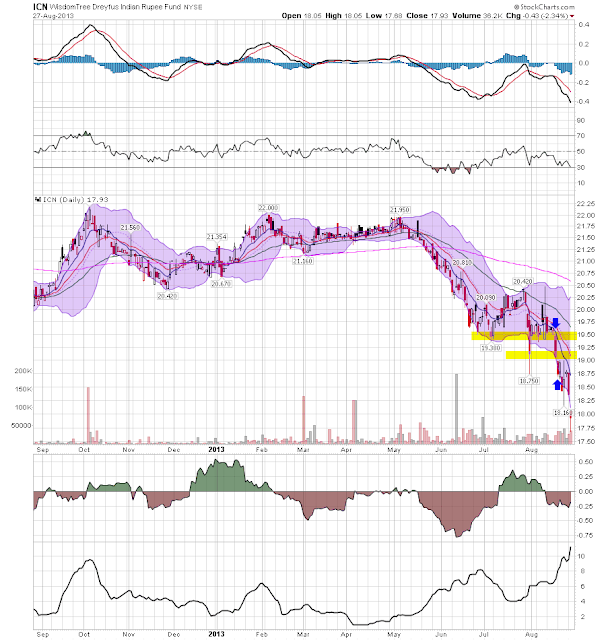 And India is not alone in it's problems.  The latest news out of Brazil is not encouraging.

First, we see the manufacturing sector's reading fell below 50, indicating a contraction:

Reflective of lower foreign business and total new orders, Brazilian manufacturers reduced their output in July. Subsequently, the PMI fell to a 13-month low, and indicated that the country’s manufacturing economy
deteriorated for the first time since September 2012.  Meanwhile, the depreciation of the real reportedly resulted in higher prices paid for inputs, with the rate of cost inflation accelerating to the fastest in over three years and charge inflation picking up to the sharpest in five years.

The seasonally adjusted HSBC Brazil Purchasing Managers’ Index™ (PMI™) fell to its lowest reading in 13 months, posting 48.5 in July, down from 50.4 in the previous month. The latest reading indicated the first deterioration in manufacturing operating conditions across the country since September 2012. Four of the five PMI sub-indices negatively affected the 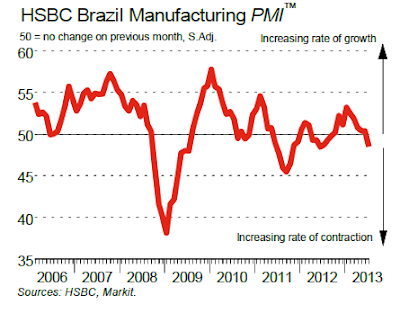 The service sector output continues to fall, although it is currently on this side of an expansion:

The seasonally adjusted Services Business Activity Index fell from 51.0 in June to 50.3 in July. The latest reading was indicative of a marginal increase in
services output, and the joint-weakest in the current 11-month expansionary sequence. Slower rises in business activity were linked by panellists to weaker
gains in new work, an increasingly fragile economy and national protests.

And the country continues to have currency problems, which I first noted last week.   In fact, their central banker had to forgo an appearance at the Fed's Jackson Hole retreat in order to implement a currency plan:

But with Brazil’s currency, the real, sinking rapidly against the dollar, he chose to stay at home, and on Thursday night launched one of the world’s most ambitious responses yet to the present market volatility – a $60bn currency intervention programme.

Let's take a look at the Brazilian real ETF: 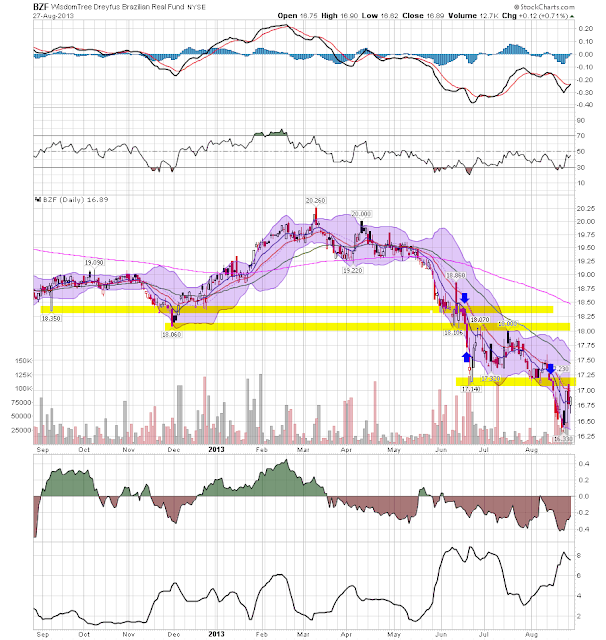 The real has been dropping all summer.  It fell through two key support levels in mid-June and again in mid-August (see blue arrows).  Momentum has been weak for three months, the volume flow has been negative, volatility is high and the moving average picture is very weak. 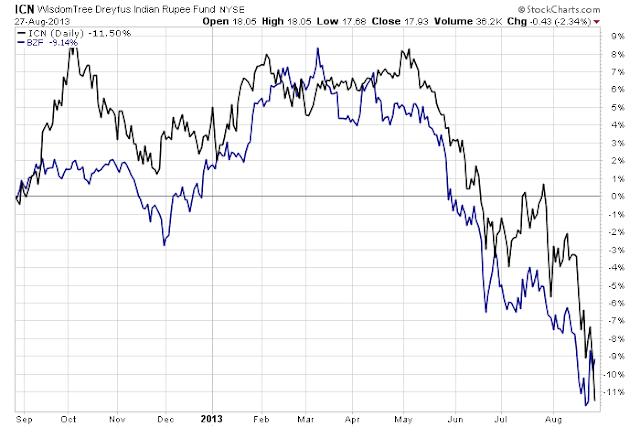