Morning Market Analysis, or It's the "Invest That Massive Dividend You Received To Avoid the Fiscal Cliff Tax Increase" Rally

I have to admit that for the last few weeks I have been utterly perplexed by the markets.  While I understand that markets are not required to always make sense, I still like to have some understanding about what is actually going on.

The problem has been the huge split between the fundamental and technical backdrop.  While the market technicals were bullish (with the exception of breadth indicators) the economic backdrop has not been.  I highlighted this divergence here.  With the exception of China, all regions of the world are either in recession (EU, UK and Japan), suffering from slow growth (the US) or slowing growth (Russian, India and Brazil).  And while the US is in a situation where it could break-out economically thanks to car sales, housing and manufacturing, Washington is doing it's very best to thwart growth with the payroll tax hike and sequester.  Simply put, these are not macro fact patterns that support new highs on equity indexes.  And while traders keep their eyes glued to the screens during a rally, looking for a viable entry point, at some point the lack of strong fundamentals has to come into play.

And then I read this:

He also says the source of January inflows [into the equity markets] may simply be the flurry of bonuses and special dividends paid out in the US ahead of this year’s tax rises. He describes this as “a flood of demand from income that would have normally occurred in January, February and March that needs a home”.

January is historically a strong month for inflows as investors make their annual contributions to IRAs and year-end bonuses are invested. This year there was a bulge in such funds as more bonuses and dividends were paid out before the "fiscal cliff" tax hikes expected at the start of 2013. Let's have a closer look at the data:

(1) Wages and salaries in personal income popped by 0.6% during December. Odds are this number will be revised upwards given that individual income tax receipts collected by the US Treasury jumped 19.8% y/y (the most since October 2011), with the 12-month average up 1.9% m/m.

In addition, consider this chart from Dr. Ed's Blog:

At the end of last year, there was a flurry of dividend payments to avert the effects of the fiscal cliff.  As the blue line shows, this action literally flooded the market with money that has to go somewhere.  So it's currently going into equities.

But at some point, that money will run out.  When this happens, the fundamentals will come back in play.

So, we're in the middle of a liquidity fueled rally with too many dollars chasing too few stocks, leading to the increase in share prices.

With that in mind, let's take a look at last week's SPY action: 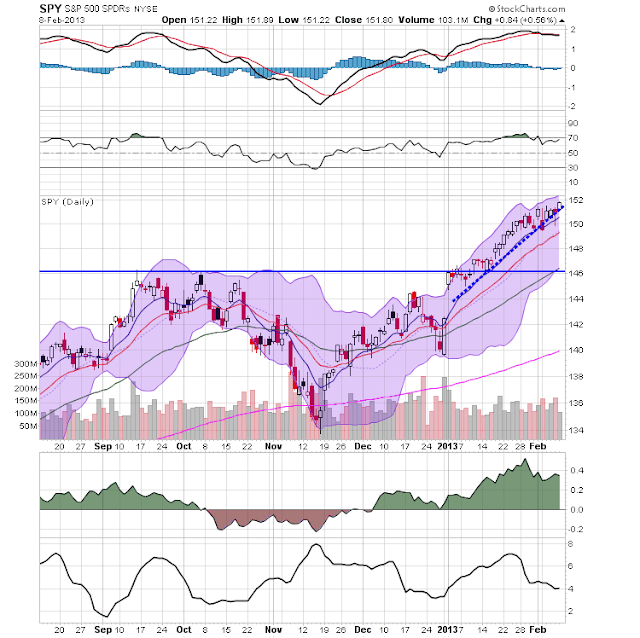 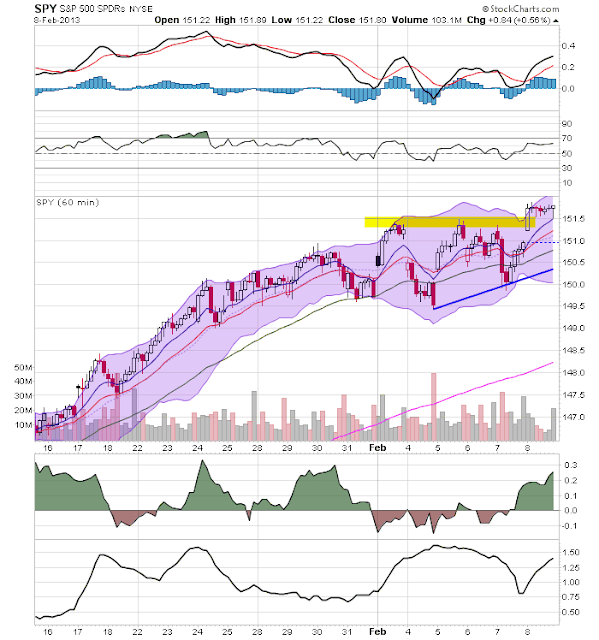 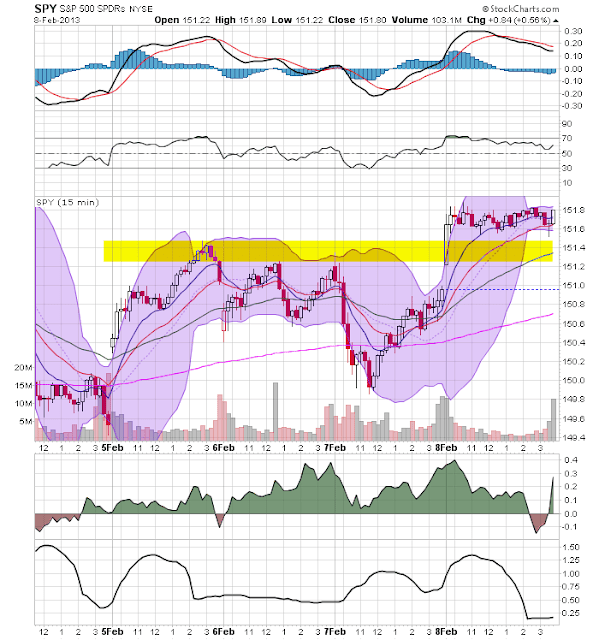 The daily chart shows that the overall bullish trend is intact.  Prices are still moving higher after consolidating last week.  All the EMAs are rising and prices are using the EMAs as technical support.  But notice the MACD which has given a sell signal.

In addition, consider these breadth indicators:

Both the S&P 500 and NASDAQ indexes have a large percentage of stocks trading over the 200 day EMA -- an overbought sign. 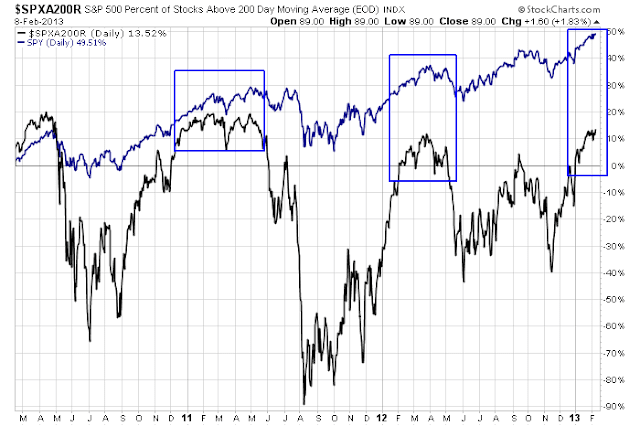 Above is a chart of the last three years price action for both the SPYs and the percent of stocks trading above the 200 day EMA.  I've boxed the areas where a peak in the percent above 200 occurs.  Notice that in all three we see a slowing rise (2010-2011) or outright peak (beginning of 2012).

And finally, consider this from Marketwatch:

Corporate insiders are now selling their companies’ stock at a rate not seen since late last July.
.....
Consider a ratio calculated by Argus Research of the number of shares insiders have sold in the open market to the number that they have bought. Last week, according to the latest issue of Argus’ service, the Vickers Weekly Insider Report, this sell-to-buy ratio stood at 5.77-to-1. And among insiders at companies listed on the New York Stock Exchange, this ratio was even more lopsided at 8.2-to-1.

Making these recent readings even more worrisome, according to Argus Research, is that they came on markedly stepped-up activity among corporate insiders. This increases our confidence that the ratio accurately reflects prevailing sentiment among a broad cross-section of the insiders.

So, to sum up my points above, the current rally is technical in nature.  A bunch of new money flooded the market -- money that had to go somewhere.  But at the same time, the economic fundamentals just don't support this move higher.  Finally, the underlying breadth indicators are weak and insiders are selling into the rally.

This is not a strong bull market that will continue for a long time, barring a a change in the underlying fundamental.