The downturn in Italian manufacturing continued to ease at the start of 2013, as signalled by a rise in the seasonally adjusted Markit/ADACI Purchasing
Managers’ Index® (PMI®) to a ten-month high of 47.8 in January, up from December’s mark of 46.7. A principal factor behind the increase in the
headline number was a much slower drop in output than seen in December. The latest decline in production levels was only modest, and the least marked over the current spell of contraction that began in October 2011.

Data also pointed to an improved trend in new orders placed at Italian manufacturers, which fell at the slowest rate for ten months in January (although still solidly in the context of historical data). That was in part a reflection of a return to growth in new export business, although the rise was only slight.

Despite recording slower declines in both production and new orders, Italian manufacturers cut staffing numbers at a solid and slightly accelerated rate during January. That extended the ongoing spell of net job losses in the sector to a year-and-a-half. Anecdotal evidence highlighted the non-replacement of voluntary leavers as a key reason for falling employment.

January saw Italy’s service sector output contract at a faster rate, as highlighted by the seasonally adjusted Markit/ADACI Business Activity Index – which is based on a single question asking respondents to report on the actual change in business activity at their companies compared to one month ago – falling from December’s post of 45.6 to 43.9 in the first survey period of the year. This latest reading was the lowest since last July, and signalled that the sector’s ongoing sequence of contraction extended into a twentieth straight month.

Reflecting the sustained (and accelerated) decrease in business activity, Italian service providers continued to slash staff numbers during January. Moreover, the decline in employment over the month was the most marked since data collection commenced over 15 years ago.

Behind the weakness in the sector was a further drop in the level of incoming new business, which panel members suggested was in part due to a loss of clients since December. Although slower than in the final two months of 2012, the rate of decline in new work was nevertheless still sharp in the context of historical data.

Here are the manufacturing and service charts, respectively: 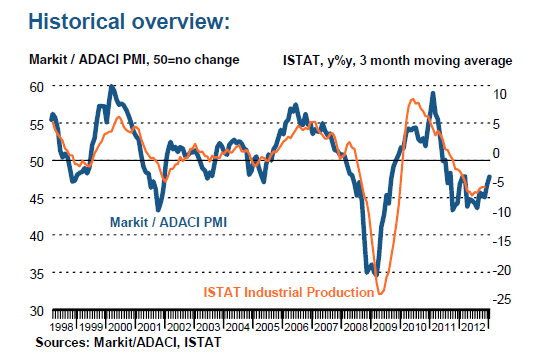 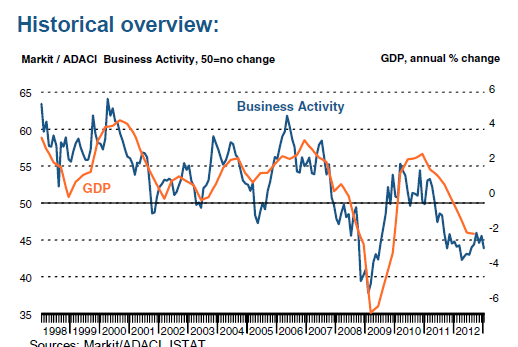 The news here is split.  Manufacturing is getting better -- although still printing the negative range -- while services are contracting at a sharper rate.  Also note that while manufacturing is healing -- as shown by the improvement in new export orders -- manufacturing employment is still dropping as a result of excess capacity.  We'll need a few more months of good data for that trend to change.

Finding country specific data on Italy is an incredibly difficult task.  However, we do have the following chart from the latest EU GDP release: Italy has had four quarters in a row of GDP contraction, indicating the economy is in a recession.  Unemployment has printed at 11.2% for the last four readings.

While there are indications from the manufacturing report that the recession is moderating, the overall PMI is still printing negative.  Services are not in good shape and the economy is still in a technical recession with high unemployment.  I'm not sold on the idea of Italy coming out of the recession just yet.