Let me now explain our assessment in greater detail, starting with the economic analysis. Euro area real GDP declined by 0.1%, quarter on quarter, in the third quarter of 2012, following a contraction of 0.2% in the second quarter. Available data continue to signal further weakness in activity in the fourth quarter and at the beginning of 2013. This weakness reflects the adverse impact of low consumer and investor sentiment on domestic expenditure, as well as subdued foreign demand. However, financial market sentiment has improved and the latest survey indicators confirm earlier evidence of a stabilisation in business and consumer confidence, albeit at low levels. Later in 2013 a gradual recovery should start, with domestic demand being supported by our accommodative monetary policy stance, the improvement in financial market confidence and reduced fragmentation, and export growth benefiting from a strengthening of global demand.

It's standard issue for a central banker in the middle of a recession or slow economy to say that further down the road a gradual recovery will take place, largely as the effects of the central bank's policy announcement take hold.  But, let's look at the overall data to see if that's what is really happening underneath the surface.

First, I've written a fair mount on the EU over the last month or so.  Overall bank funding is improving, but consumer confidence and business confidence are still weak.  An argument could be made that each is stabilizing, but they are both still at low levels.  And from a GDP perspective, I noted the following in December:

That means that of 27 countries in the EU 27, a little under half are in a technical recession. A summation of the preceding points would be that the EU is just not doing that well.

However, let's try and read the tea leaves of the four largest EU economies: Germany, France, Italy and Spain, starting with Germany.

Germany is by far the largest economy in the EU area, accounting for about 27% of the EUs size.  As such, it's performance alone can have a disproportionate impact on the EU's growth prospects.

From the latest German Markit Manufacturing and Services sector releases we get the following:

Germany’s manufacturing sector started 2013 with improved trends in output and new business levels, contrasting with the declines seen through much of last year. The return to growth in production and new work helped lift the final seasonally adjusted Markit/BME Germany Purchasing Managers’ Index® (PMI®) – a composite indicator designed to provide a single-figure snapshot of the performance of the manufacturing economy – to 49.8 in January, from 46.0 during December. This was only fractionally below the neutral 50.0 value, with an acceleration in job shedding the main factor weighing on the headline PMI in the latest survey period. The index has now posted below 50.0 in each of the past 11 months, but the latest reading signalled

January data pointed to resurgent growth across the German service sector, with business activity and new order volumes both rising at the fastest rate since June 2011. Adjusted for seasonal influences, the final Markit Germany Services Business Activity Index picked up from 52.0 in December to 55.7 in January. The index highlighted back-to-back monthly rises in business activity for the first time since May 2012. Moreover, the latest reading was well above its long-run average (52.9) and signalled a robust pace of output expansion that was the fastest for 19 months. The upturn in business activity at the start of 2013 reflected growth in five of the six sub-sectors monitored by the survey, with Post & Telecommunications the exception.

Let's look at the accompanying charts: 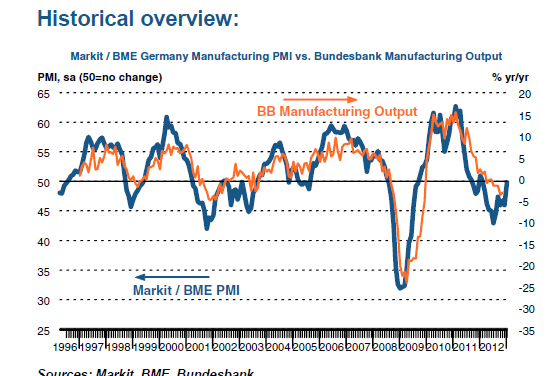 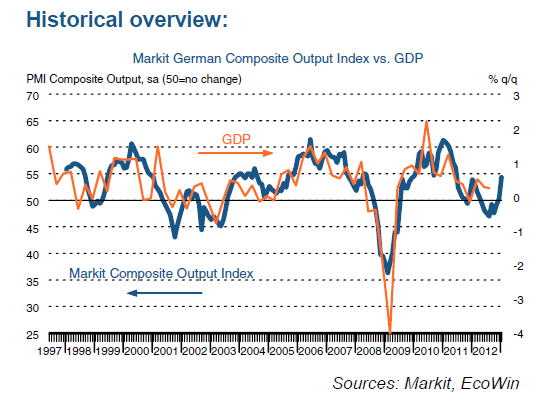 The Manufacturing chart (top chart) shows that this index has been negative for most of 2012.  However it appears to have bottomed around mid-year and is currently rebounding higher, printing just below positive in their latest print.  Overall production in the last report rebounded from a recent sharp decline, and exports -- while still being negative -- improved a bit.

The real standout is the surge in the service PMI (bottom chart).  This index went negative for the past part of 2012, but has since rebounded strongly.  The latest report noted the primary reason for this surge was a big bump in new business, caused by improved customer confidence.  This move was in contrast to the 8 months of new order decline that had occurred in 2012.

Let's turn to German GDP, which was recently released by the Bundesbank: 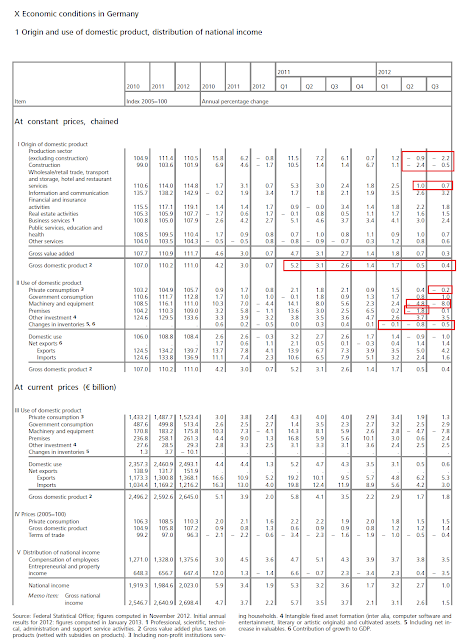 A few points stand out in the data.  First, note the general rate of overall slowdown in the data.  In the first few quarters of 2011 we see annual prints of 5.2% and 3.1%.  By the last few quarters of last year, we're seeing prints of .5% and .4%.  While these numbers are still positive, they are just barely so.  The big reason for the slowdown is the drop in production and construction, which contracted in the last two quarters of last year.  But also note the slowing of retail purchases and inventory depletion.  The bottom line is several key components of the data slowed.  But also note the primary reason for the slowdown -- production -- is probably related to the overall slowing of the EU economy and Germany's export juggernaut.  This means that a healing EU would lead to a growing Germany.

Conclusion: Because of its size Germany has the ability to pull the EU out of its recent slow prints.  The above data point to a brightening picture for this economy, but we're not out of the woods yet.  Ideally, we'd need a new more months of strong manufacturing and service numbers.