The U.S. Census Bureau announced today that advance estimates of U.S. retail and food services sales for January, adjusted for seasonal variation and holiday and trading-day differences, but not for price changes, were $416.6 billion, an increase of 0.1 percent (±0.5%)* from the previous month and 4.4 percent (±0.7%) above January 2012. Total sales for the November 2012 through January
2013 period were up 4.5 percent (±0.5%) from the same period a year ago. The November to December 2012 percent change was unrevised from +0.5 percent (±0.3%).

Let's take a quick look at the data: 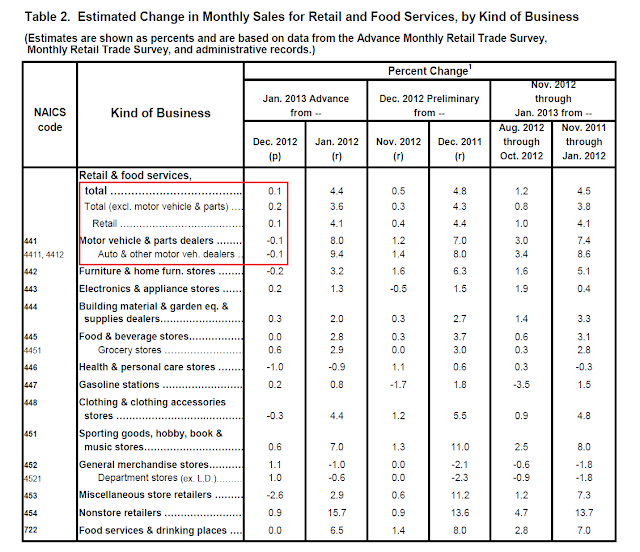 Overall, we see weak retail sales growth in the nacro-data above.  While the year over year numbers are good, the month to month is concerning.  Some of the lack of increase could be the result of the Christmas season pulling into December, leading to a better Christmas with a bit of a January hangover.  Also note the decrease in auto sales -- not at all encouraging.

In January we had the payroll tax increase start to bite.  We could also be seeing the beginning effects of that development taking hold.

NDD here with a few comments:

The general reaction to this morning's retail sales report for January seems to be a sigh of relief, as the number was positive +0.1% month over month. In fact, real, inflation adjusted retail sales probably declined slightly, but we won't know for another week.

Although the BLS does seasonally adjust the retail sales number, January CPI tends to be slightly higher than in most other months, running at an average of +0.3% over the last 10 years. If this year is in line with that average, then real retail sales will be down -0.2% for January. Typically the CPI report and the retail sales report are released within a day or two of each other, but this month we will have to wait until next Thursday for the CPI report.

If you want to see more optimistic data on retail sales, take a look at this graph of Gallup's daily consumer spending report since January 1, 2012:

According to this report, on a YoY basis, consumer spending report has been on a tear since the beginning of December, reaching levels not seen since December 2008 - and staying there. While in 2012 consumer spending declined to a low of $59 on a 14 day rolling basis on February 7, 2012, this year it only fell as low as $74 on January 27. It has since increased back to $88 on February 11, $28 higher YoY for the previous 14 day period. It's been suggested that high income earners who got year end bonuses to beat the tax rate increases are out spending the money, and that certainly looks like a reasonable surmise.
Posted by Unknown at 9:30:00 AM