Let's start by looking at the latest Markit manufacturing report:

The Spanish manufacturing sector remained in contraction at the start of 2013. Solid declines in both output and new orders were recorded again, and firms continued to cut jobs. There was, however, some positive news on the export front as new business from abroad rose for the third time in the past four months.

The seasonally adjusted Markit Purchasing Managers’ Index® (PMI®) – a composite indicator designed to measure the performance of the manufacturing economy – posted 46.1 in January, up from 44.6 in the previous month. Although the latest reading signalled the weakest worsening of business conditions in 19 months, it was still solid.

Total new orders continued to contract at a solid pace, although the rate of decline eased to the weakest since June 2011 as a result of increased new export orders. New business from abroad rose for the third time in the past four months, and at a broadly similar pace to that seen in December.

And the latest Market Services report:

Although the Spanish service sector remained in contraction at the start of 2013, both activity and new business declined at slower rates during the month and confidence among firms with regards to the 12-month outlook improved. That said, employment continued to fall during January, and at an accelerated pace.

The headline seasonally adjusted Business Activity Index – which is based on a single question asking respondents to report on the actual change in business activity at their companies compared to one month ago – rose to 47.0 in January, from 44.3 in the previous month. The latest reading signalled a further solid reduction in activity during the month, although the rate of contraction was the weakest in the current 19-month sequence of decline.

Those respondents that posted a decrease in activity linked this to falling sales amid the economic crisis in Spain. New orders decreased at a solid pace in January, although the rate of decline eased to the slowest since August 2011. Financial Intermediation posted growth of both activity and new business, while the remaining monitored sectors all recorded declines.

Here are the relevant charts: 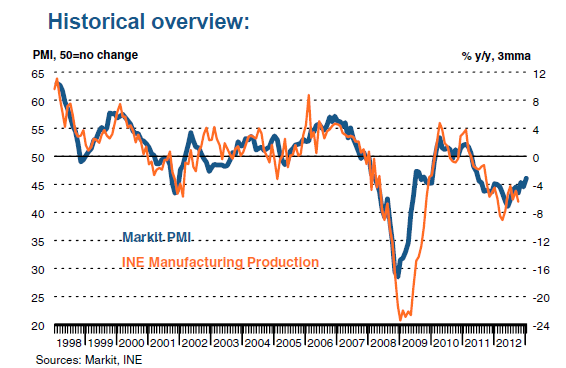 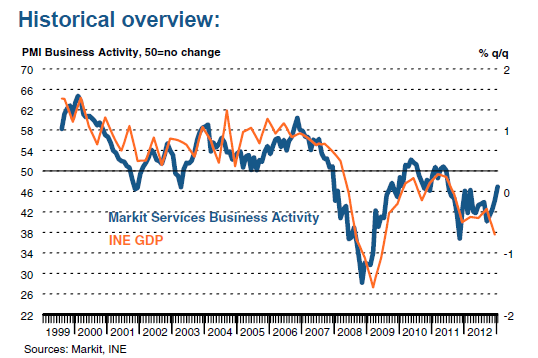 There is nothing positive in the manufacturing report.  The index itself is at very low level -- despite its recent upturn.  New orders and overall production decreased at a "marked" pace.  While new orders from abroad did increase, these are still at low levels.  The only good news is the lack of inflation, which is to be expected.

The service sector at least is seeing a pick-up as evidenced by the sharp jump in the overall index (lower chart).  The overall index and production decreased at a solid pace.  The only good news is that financial intermediation increased, signaling that the banking sector may be healing a bit.

The combined impression both reports give is of an economy still deep in a recession. 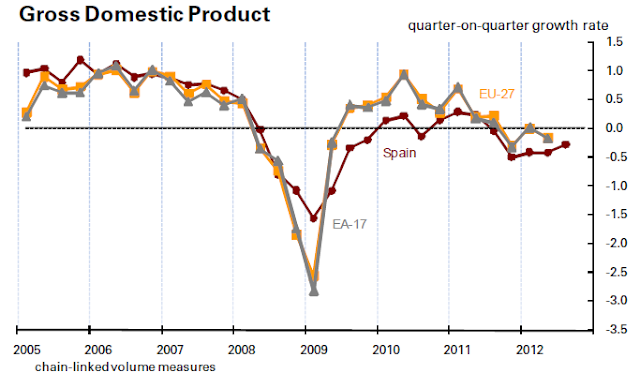 The top chart shows that Spanish GDP has been contracting for 5 quarters -- clearly a recession.  The lower chart shows the Q/Q growth rates of Spanish GDP and its various components.  The key issue here is the incredibly large number of negative numbers across all categories and all time frames.  Put another way, you'd be hard pressed to find any good news in this chart; its simply does not exist.