I wrote this before today's release of the EU's GDP report.  Suffice it to day, France did not bode well in that release, either.

Let's now turn to France -- which accounts for about 21% of the total EU economy -- starting with the Markit Manufacturing and Service surveys:

Operating conditions in the French manufacturing sector worsened during January. The headline Purchasing Managers’ Index® (PMI®) – a seasonally adjusted index designed to measure the performance of the manufacturing economy – dropped from 44.6 in December to 42.9, its lowest reading in four months. The PMI was dragged lower by all five of its components; output, new orders, employment and stocks of purchases all contracted at accelerated rates while suppliers’ delivery times lengthened to a less marked degree than one month previously.

Key to the weaker performance of the manufacturing sector was a steep decrease in the level of new orders placed with French manufacturers. The rate of decline in new work was the fastest since March 2009. Panellists commented that heightened economic uncertainty had resulted in a tough business climate during the latest survey period. Data signalled that domestic demand was again the key source of weakness, as total new orders fell at a considerably sharper rate than export sales.

And we have the services number:

The seasonally adjusted final Markit France Services Business Activity Index – which is based on a single question asking respondents to report on the actual change in business activity at their companies compared with one month ago – slipped to 43.6 in January from 45.2 in December. The latest reading was indicative of a marked rate of contraction that was the sharpest for almost four years. Panellists attributed lower output to difficult economic conditions and declining levels of new business.

Business activity across the French private sector as a whole decreased at a steep rate in January. At 42.7, down from 44.6 in December, the seasonally adjusted final Markit France Composite Output Index – which covers the combined manufacturing and service sectors – signalled the steepest rate of decline since March 2009.

Here are the charts: 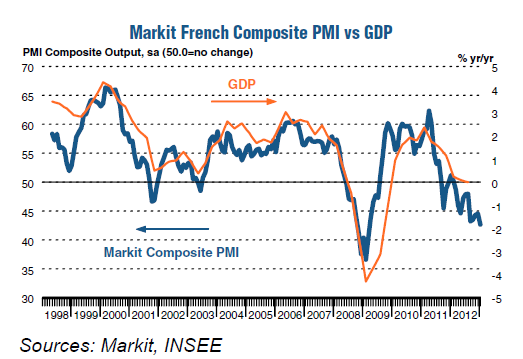 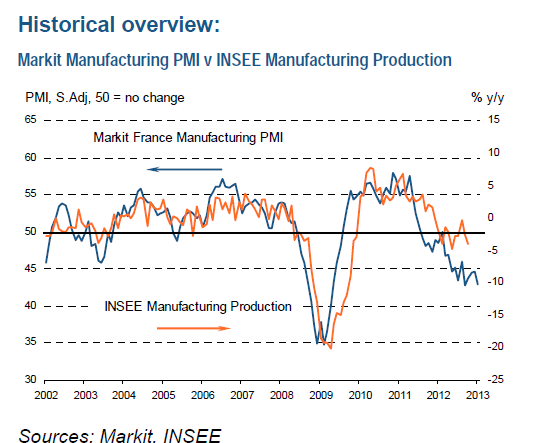 Neither of the respective reports or charts have any good economic news.  The French manufacturing sector (top chart) has been declining for the better part of a year, bringing down overall GDP growth.  As the accompanying write-up demonstrates, the slowdown is broad-based, hitting all five components of the index.  Most importantly, the real issue is the domestic slowdown caused by slowing growth and overall uncertainty.

The service sector chart (bottom chart) has the exact same problem as the manufacturing chart -- an overall rate of decline for the better part of the last year.  Also note there is not upward trend in either chart. 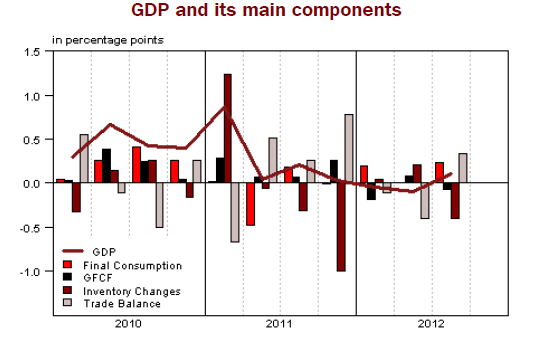 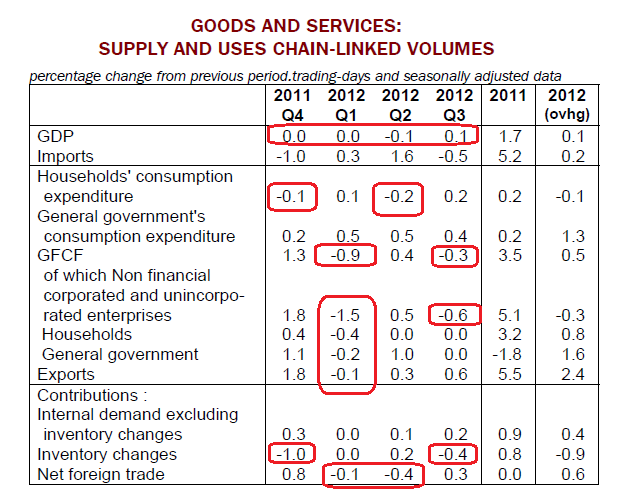 The above chart puts the GDP data into clearer view.  First, the overall growth rate at the macro level has stalled right around 0% for four quarters.  While that's not a technical recession, it certainly is not the sign of an economy that is doing well.  The underlying data shows that a variety of factors have contributed to the overall growth slowdown over the last four quarters.  Inventory adjustments slowed the economy in 4Q11 and 2Q12.  The first quarter of 2012 saw a big hit to net investment, while foreign trade slowed the economy for two quarters.

The above data shows no promise for the French economy going forward.  Instead, we see an economy struggling to print positive growth.