Will China Save Us -- Again?

Chinese economic growth was a primary driver of the world-wide economic recovery from the great depression.  Thanks to a massive stimulus program initiated and implemented by the Chinese (a purely Keynes based program), China went on a massive infrastructure build.  This in turn increased the country's demand for raw materials which drove the economic growth of raw materials exporters like Australia, Brazil and Russia.  In essence, the BRIC countries -- thanks to China's spending -- prevented the world from collapsing into a world wide depression.

However, over the last 18-24 months, the Chinese central bank increased rates and raised reserve requirements in an effort to slow inflation and stave off a real estate bubble.  Here is a chart from the St. Louis Fed system of the Chinese discount rate: 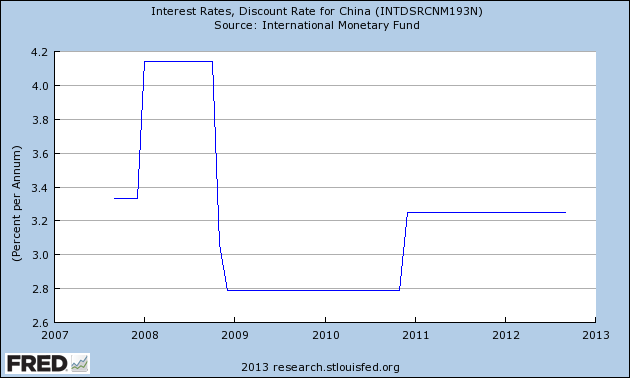 Notice the increase at the end of 2010 from 2.8% to 3.2%.  This had the intended overall effect one would expect from the central bank increasing rates and reserve ratios: the Chinese economy slowed (slow, however, is a relative term, as the economy is still growing at a 7.7% clip).   Just as importantly, inflation slowed:

Note that the year over year percentage change dropped from over 4% in late 2011/early 2012 to the 2.5% readings we see now.  In addition, the current inflation spike is largely attributed to a cold winter which is spiking food costs, a situation which should abate in the Spring.

Finally -- and certainly not to be overlooked -- is the transfer of power to a new generation of party leaders which also occurred last year -- a situation which is not conducive to bold strokes.  I believe that this process has greatly hampered the economic decision making ability of China.  However, with prices now more under control and the transfer of power complete, China appears ready to grow again. Let's take a look at the overall situation to get a better feel for what might be in store for 2013.

One of the most read and perhaps most influential Chinese economic  report is is the HSBC manufacturing index.  Here is the summation from the latest report:

After adjusting for seasonal factors, the HSBC Purchasing Managers’ Index™ (PMI™) – a composite indicator designed to give a single-figure snapshot of operating conditions in the manufacturing economy – posted 51.5 in December, up from 50.5 in November, signalling a modest improvement of operating conditions in the Chinese manufacturing sector. Moreover, it was the highest index reading since May 2011.

Output at manufacturing plants in China expanded in December, and for the second month in a row. Although the rate of expansion was modest, it was the fastest in 21 months. Total new orders also increased but at a faster pace than in November, the quickest since January 2011. Exactly 15% of panellists noted increased order volumes, a number of which attributed growth to increased client demand. Meanwhile, new export orders fell slightly following a modest increase in November. Just over 12% of firms reported lower new export orders in the latest survey period. Fewer export sales were linked to weak demand in Europe, Japan and the US.

Here is a chart of the composite index: 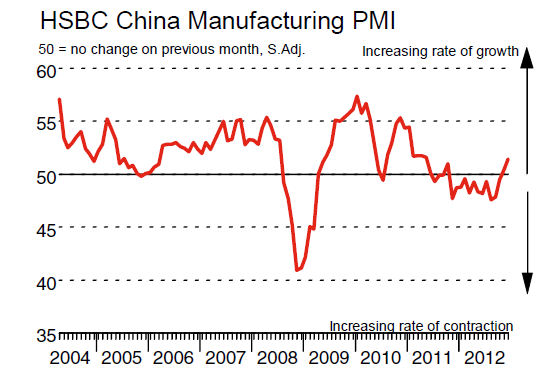 While this index has been right below an expansion reading for about a year, note it never collapsed.  This tells us there was still activity, but it was more subdued.  However, the last two months we've seen an increase about the 50 level, indicating an expansion is now a possibility.

Moving on to the Services index, see the following summation of activity:

The HSBC China Composite PMI data (which covers both manufacturing and services) signalled a modest expansion of business activity during December. Output has now risen for four consecutive months. Moreover, the rate of growth quickened slightly from November to the fastest in the current sequence. The HSBC China Composite Output Index posted 51.8 in December, up from 51.6 in November.

Output increased across both the manufacturing and service sectors during December. The rates of expansion were broadly similar, with both sectors signalling modest growth. However, the rate of expansion in services slowed further, with the HSBC China Services Business Activity Index recording 51.7 in December, down from 52.1.

New orders also rose in both the manufacturing and service sectors during December. Growth of new business in the service sector was slightly faster in December than in November, but remained modest overall. Total new orders in the manufacturing sector also grew at a stronger pace in December, and largely drove the increase in composite new orders,  which rose at the quickest rate since October 2011. 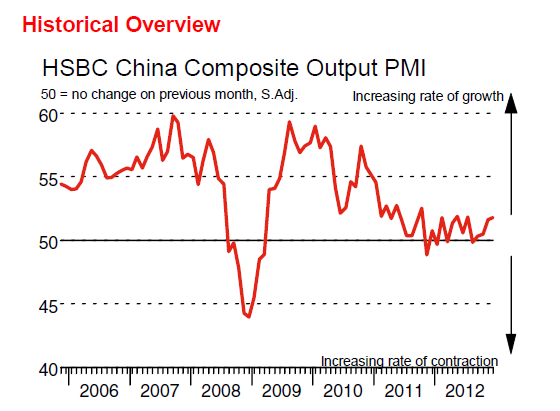 Notice that during the same period when manufacturing was slowing, services also printed more modest numbers.  However, this sector of the economy remained positive in comparison to manufacturing's slightly negative reading.

China is attempting to reorient its economic model from an export-oriented model to a consumer led model.  On that note, the Chinese consumer is certainly doing their fair share as evidenced in Chinese retail sales: 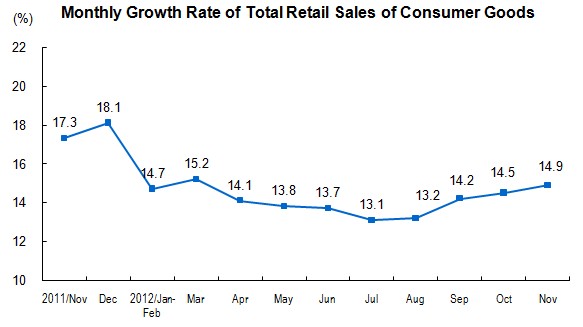 Notice that during the period of the manufacturing slowdown, Chinese retail sales were still increasing at a very fast clip, indicating domestic demand was still very much alive and in decent shape.  Here is the summation from the