This week I am updating my outlook from January. Based on a decline in long leading indicators that bottomed about 12 months ago, I expected weakness but no recession in the first half of the year, followed by stronger growth in the second half, tempered by whatever happened to the price of gas.

In the past two days I've pointed out that neither consumer spending nor refinancing supports the recession thesis being put forward by a few prominent forecasters. Today let's turn to a couple of employment indicators.

Temporary hiring is generally considered a leading indicator. Before employers hire full time workers, they hire temps. Similarly, laying off temps typically happens before regular employees are let go. That is borne out by the below graph of temprary employment: 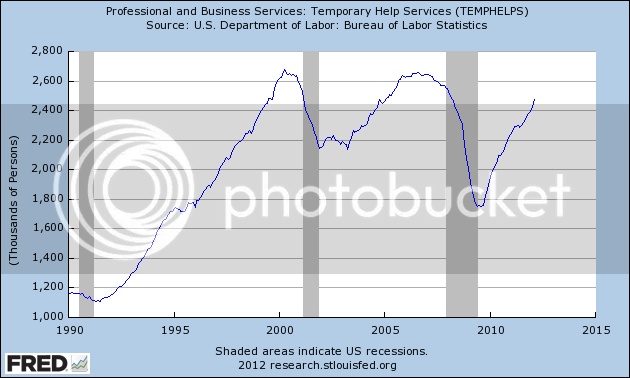 Far from turning down as it did in advance of both most recent recessions, it is still rising strongly.

If you insist on year over year comparisons, here is the same data in that format: 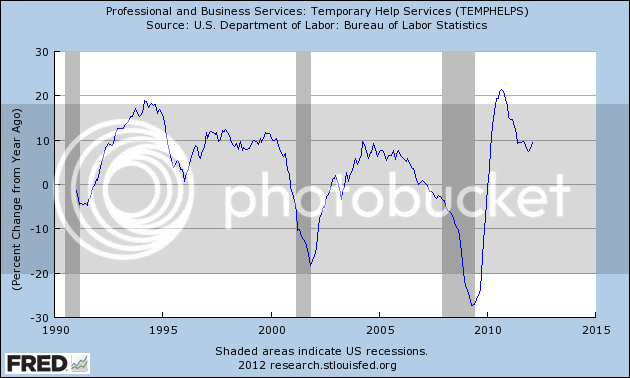 Note that temp hiring doesn't just decline, it turns YoY negative well in advance of the economic contraction. It is nowhere to be seen now.

Finally, let's look at an update of a graph I run almost every month, showing the comparison between initial claims and payrolls. Yellow markers are the months between the low in initial claims during the last expansion until June 2007. Red shows the five months immediately before the recession, up until the March 2009 peak in initial claims. Blue shows the trajectory during the recovery:: 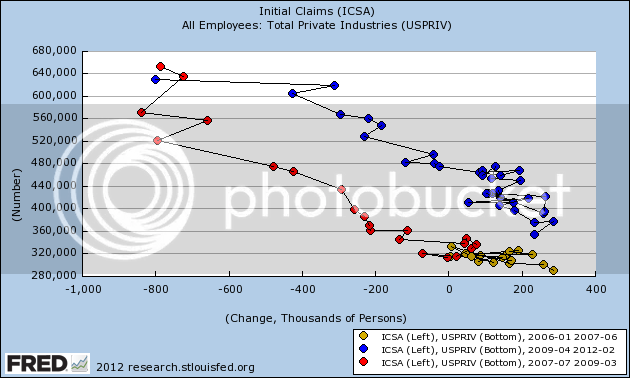 The point here is that entirely different trajectories are taken on the way into recession vs. the way out. Even initial claims between 325,000 and 350,000 were consistent with very low positive, or even negative monthly payroll prints.

No such pattern is present now. If last month gets revised down below 200,000, maybe then we have something to talk about. But virtually every month in the last year has been revised higher after the initial report.

In summary, neither temporary employment nor the trend in initial jobless claims vs. payrolls is consistent with either an ongoing or even a near in time recession.
Posted by New Deal democrat at 2:00:00 PM