This post continues the re-examination of my January forecast. It has been contended that whenever YoY GDP growth declines below 2%, a recession inevitably follows. We have had real GDP growth under 2% YoY for 3 quarters now, therefore we are on the cusp of another recession. Is that true?

Below are two graphs covering the entire period from 1947 to the present, showing real GDP on a YoY basis, minus 2%. Thus any period of real GDP growth under 2% is converted into a negative number. First, here's 1947 to 1972: 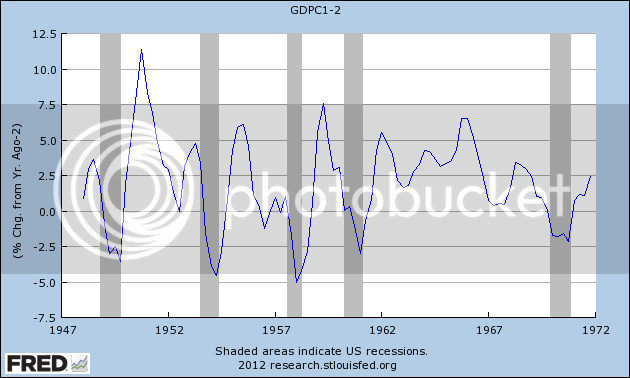 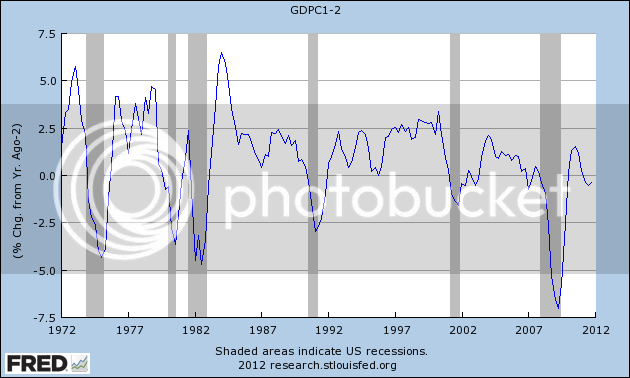 In short, there have been two periods previous to the present of growth meandering above and below the level of 2% GDP for substantial periods of time. On one of those occasions, a recession followed. In the other, it did not. Otherwise, growth either resolved very quickly into a recession after no more than one quarter of growth under 2%, or else stronger growth immediately resumed.

At least one forecasting firm, referring to a coincident index rather than GDP per se, responded to an email from a reader of Mish's blog in relevant part as follows:

It is important to realize that the bolded language above reflects a purely subjective judgment. In 2002, nobody knew if we were "following a recession" or not. In fact, there was very serious commentary at the time arguing that we were indeed in danger of a double-dip. For example, here's the subtitle and lede paragraph from a CNN Money article on March 31, 2003, entitled "Is this the Second Dip?":

Investors may not have to worry about whether the economy might plunge back into recession for much longer. Increasingly, it looks as though the plunge has already begun.

In short, only in retrospect did we know that we were "following a recession."

ECRI's Coincident Index follows a similar pattern and has the same issue. The YoY change in their index has only fallen below 2.0% for one month - January of this year - before rebounding to 2.4% in February. By contrast, after the 2001 recession ended, it meandered below 2% YoY for 24 months before finally resolving higher.

Today in 2012, are we still "following a recession" or not? The difference between now and 9 years ago is that we are 2 years+ rather than 1 year+ following the trough of the last recession, and intervening growth was stronger now than then. Any forecast that makes the judgment to set aside the 2002 data on that basis is necessarily making a judgment call, and is therefore subjective.

So, with current real YoY GDP meandering just below the 2% level, is an imminent recession a certainty? Post-WW2 data contrasting 1956 vs. 2002 indicates, to the contrary, that it a coin-flip.
Posted by New Deal democrat at 2:00:00 PM